No place on earth compares to Tibet — where the natural grandeur of the Himalayas and pristine turquoise lakes form a stunning backdrop for ancient Tibetan Buddhist temples. It’s a photographer’s dream, mysterious and otherworldly. All in the same day, you may encounter a smiling nomad with his yaks in a green valley, glaciers snaking down from snow-covered, sky-high passes, and maroon-robed monks chanting in the flickering glow of hundreds of butter lamps. If you’ve been dreaming of visiting Tibet for as long as you can remember, here are my recommendations for the 15 most beautiful places to visit in Tibet… 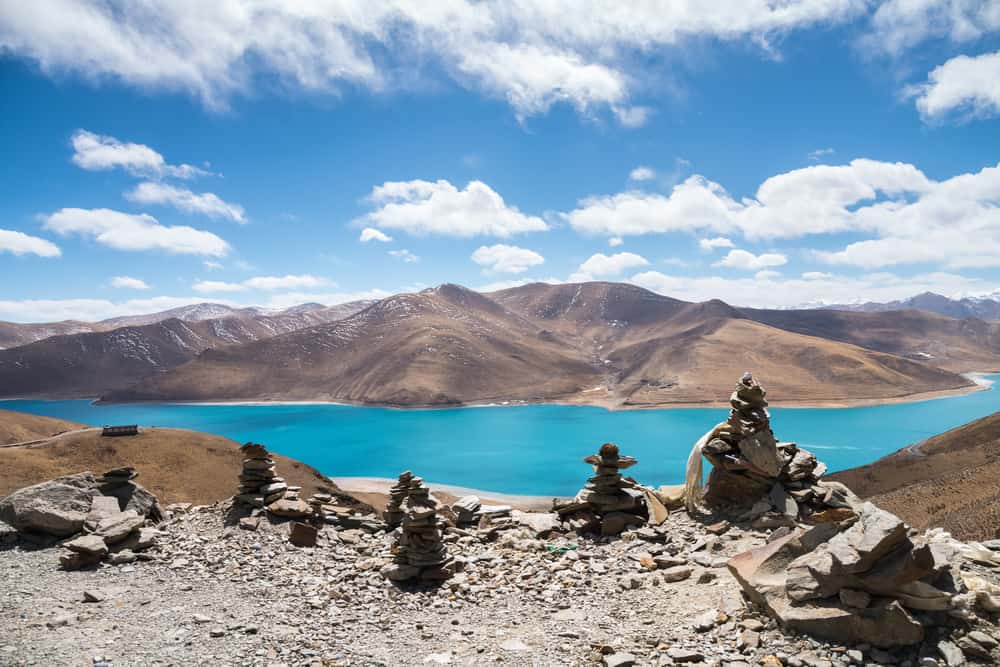 You get your first view of Yamdrok Yumtso, as it is known to Tibetans, when you reach the Kamba La Pass (4852 meters/ 15,915 ft) on the road from Lhasa to Gyantse. The lake is one of the three most sacred lakes in Tibet, and is home to Samding Monastery, unique because it is one of the few Tibetan monasteries headed by a woman. 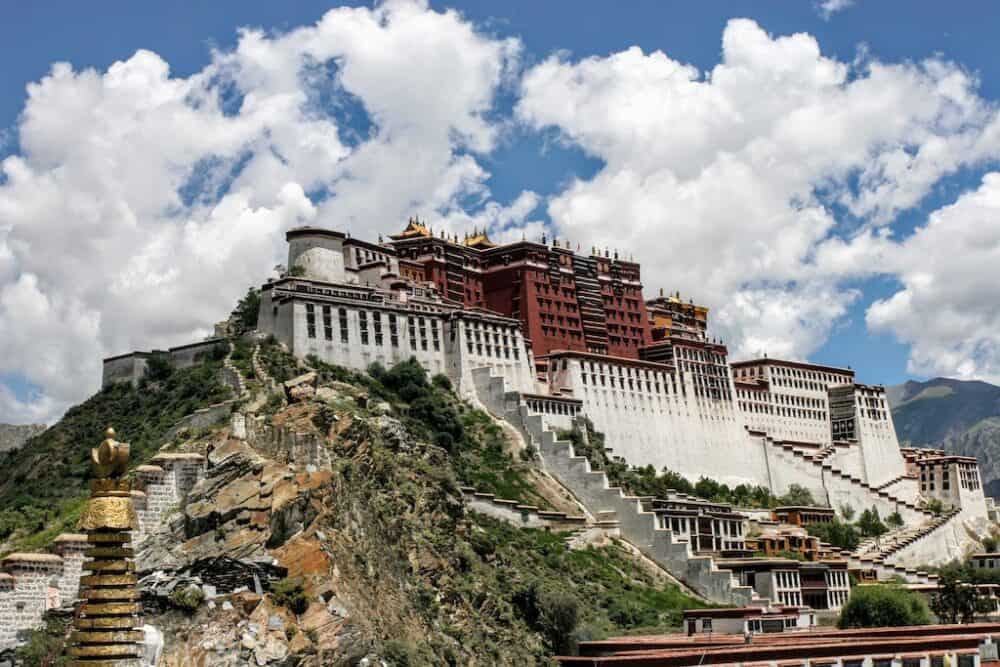 Lhasa holds many of the spiritual and cultural treasures of Tibet, and even if you go nowhere else in Tibet, Lhasa offers a genuinely extraordinary experience. Some of the most famous points to sightsee are the soaring, World-Heritage-Site Potala Palace (former home of the Dalai Lama), the sacred Jokhang Temple, and the most venerable of Tibet’s monasteries: Drepung, Sera and nearby Ganden. and one of the great cities of the world 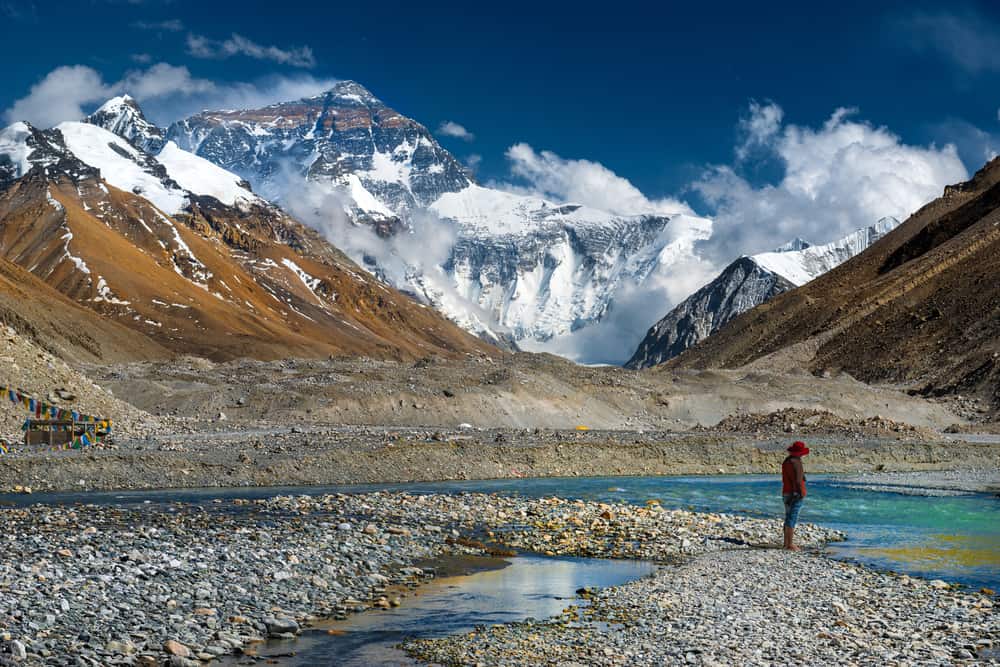 Who hasn’t dreamed of laying eyes on the brilliant white peaks of the highest mountain on earth? The view is quite literally breathtaking since even at Everest Base Camp you are at extremely high altitude: 5200 meters / 17,060 feet. It is possible to sleep in simple accommodations at Everest Base Camp so that you can wake up to the stunning, bright white north face of the holy mountain that Tibetans call Chomolangma, or Goddess Mother of the World. You may not know that the summit of Mount Everest sits exactly on the border of Nepal and Tibet, and that though you can view the mountain from either side, the Tibet side has the best, most unobstructed view. 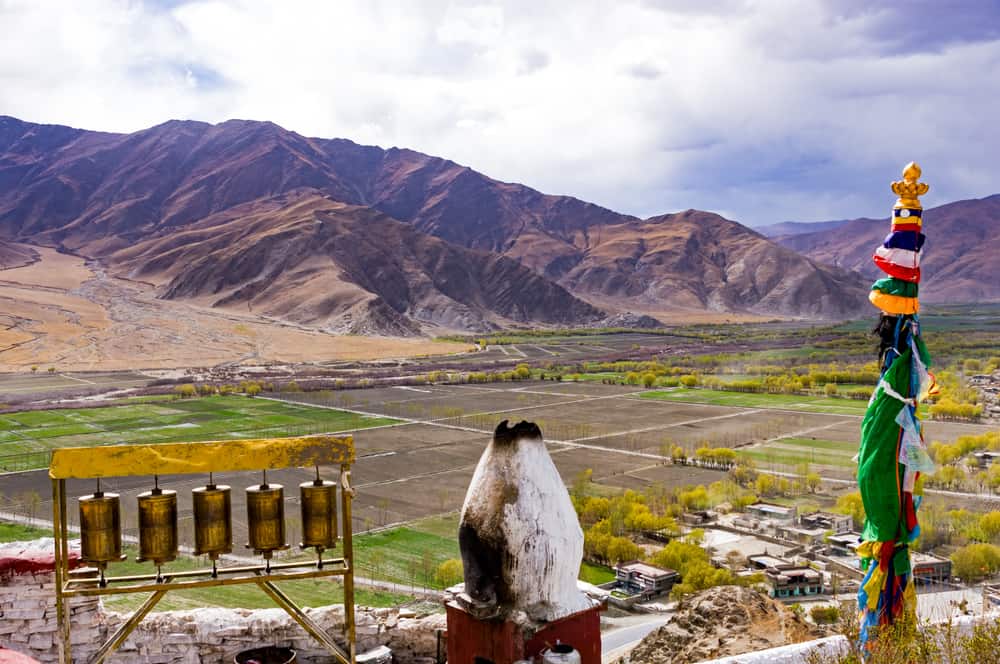 Perched dramatically on a hill above the Yarlung Valley, the Yumbulakhang is known as the first palace of the first Tibetan king, Nyatri Tsenpo. In itself beautifully elegant and simple, the small palace overlooks a lovely fertile valley that is considered the cradle of Tibetan civilisation. While the exterior of the palace is truly one of the most striking places in Tibet, there’s not much to see inside the restored building, which was heavily damaged in the Cultural Revolution. Don’t miss heading up the hill behind the palace for an excellent view of the palace among lines of riotously colored prayer flags.

Lake Namtso – a heavenly Lake and home to hermits 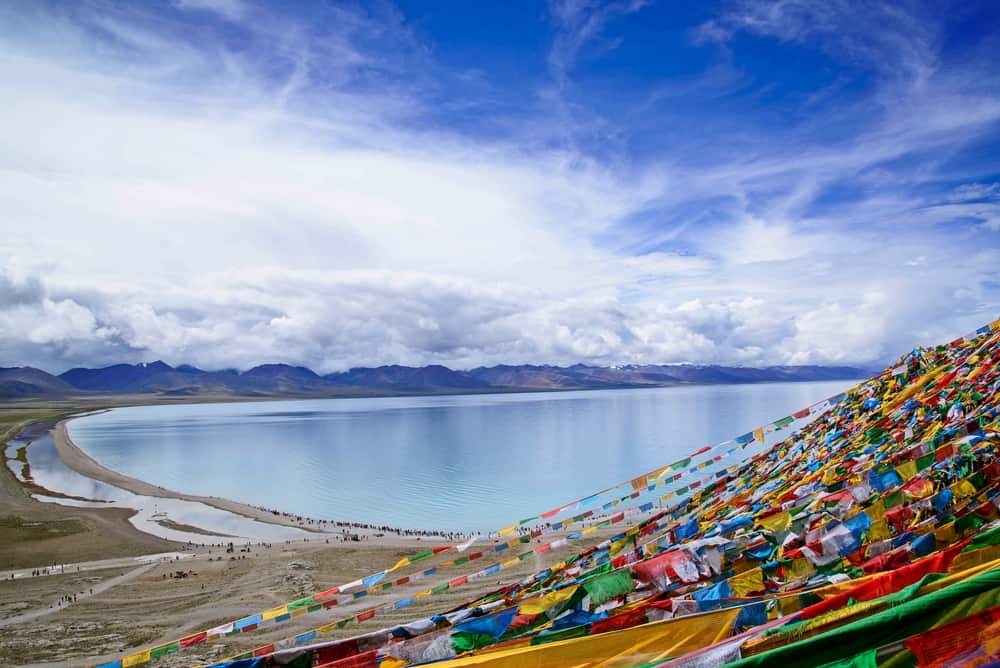 Namtso Lake’s gloriously clear blue salt waters attract nomads, pilgrims and travelers alike. Don’t let the fact that this is a day trip from Lhasa fool you into thinking you can just pop over without getting acclimated to Lhasa’s altitude first.  Already at 3658 meters/11,975 feet when you arrive in Lhasa, the drive to Namtso takes you up over 1000 more meters (3000 feet). It won’t be just the views that take your breath away if you don’t spend a few days in Lhasa first!

Mount Kailash – the most sacred, least well-known peak on earth 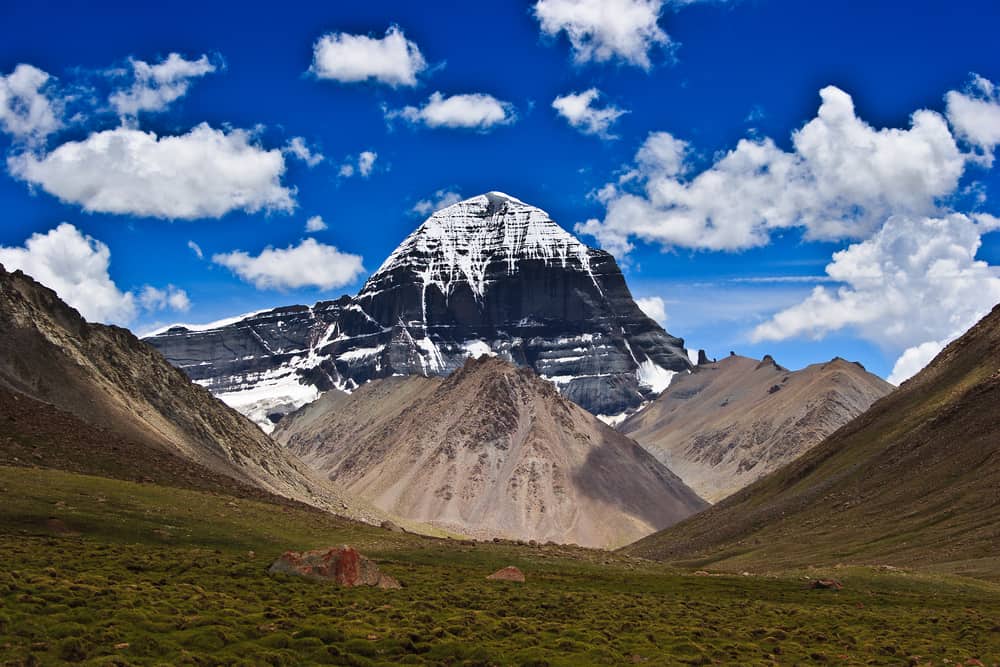 Mount Kailash is enormously revered and important in Asia, but is barely known in the West. Mother of four of the world’s great rivers, and sacred to Hindu, Buddhist, Jain and Bon faiths, Kailash is an important pilgrimage site. The journey to Kang Rinpoche — the Tibetan name for Kailash, or Precious Jewel of Snow — is not for the faint of heart or the traveler low on time. One of the great overland trips of Asia, it takes at least 15 days and includes a 52 km/ 32 mile trek that begins at 4600 m/ 15,000 ft and goes over the 5600 m/18,372 ft Dolma La Pass.

Your first view of Everest and the peaks surrounding her as you come over the Gyawu La pass is like nothing you will ever experience again in your life. The panorama spread out before you includes a glorious array of peaks over 8000 m / 26, 246 ft high: Lhostse, Makalu, Cho Oyu, and Shishapangma. Here is a helpful tip if you’re looking up Gyawu La on a map. Like many Tibetan words, it is spelled in many different ways in the roman alphabet — Geu La, Gawu La, and Gyawu La. Since the Tibetan word for pass is “la,” it’s actually repetitive to call it the “Gyawu La Pass.” In the same way, saying “Namtso Lake” is actually saying “Nam Lake Lake,” since “tso” means lake, though it is very common to do so 🙂 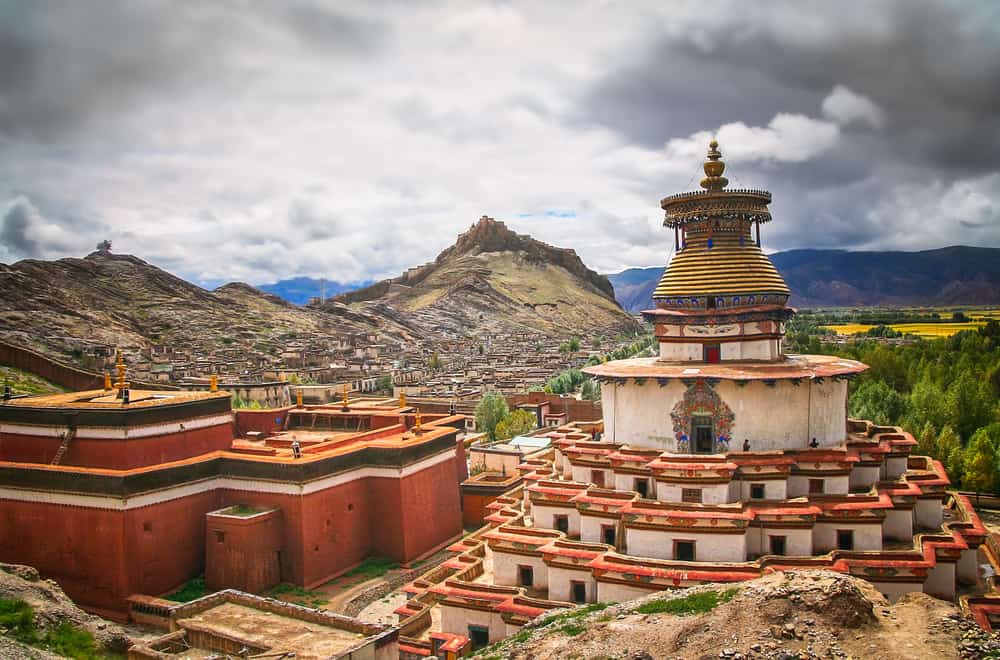 The striking Kumbum is one of the visual highlights of Gyantse’s Pelkor Chode Monastery.  Kumbum in Tibetan means “one-hundred thousand holy images,” and you can see these in 108 little chapels as you ascend the nine stories that represent a Tibetan Buddhist mandala. At the Kumbum, you have the rare opportunity to literally walk through a representation of the Buddhist Pure Land and the path of enlightenment. 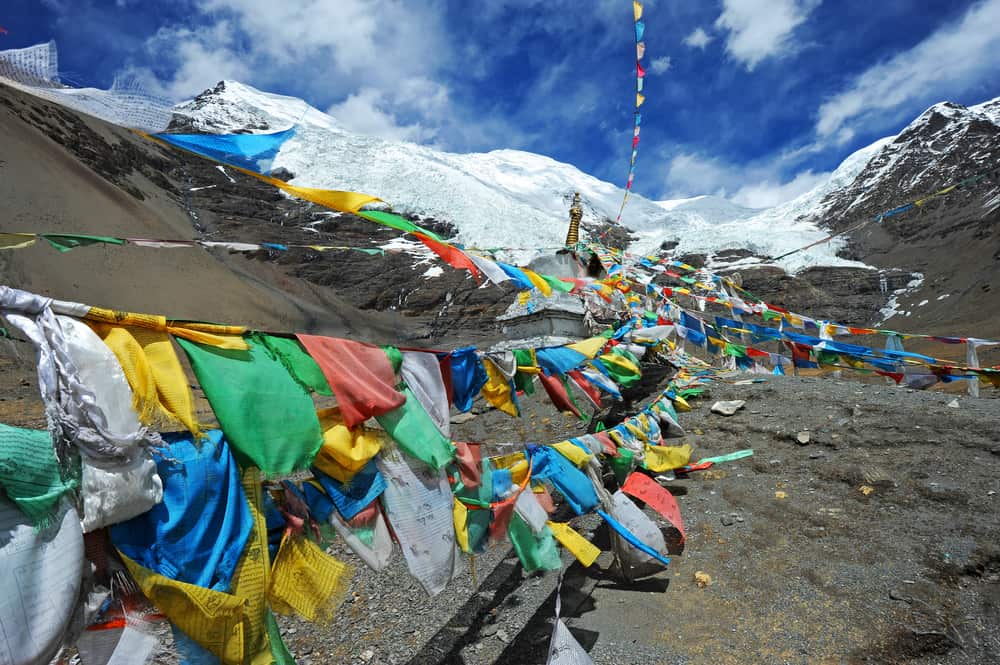 The road from Lhasa to Everest Base Camp is lined with some spectacular sights, and not least among them is the Karo la Glacier that flows down from Mount Nyenchen Khangsar. There are several viewpoints, and you can follow a wooden walkway that allows for wonderful, unobstructed views.

Walking the scenic pilgrimage path around and above the great Tashilumpo Monastery is a quintessentially Tibetan experience — with excellent views of the old town of Shigatse, and the pleasant hum of prayers from your fellow pilgrims, Tibetans of all ages. The monastery itself is the seat of the Panchen Lama, second only to the Dalai Lama in importance to Tibetan Buddhists, and holds a multitude of treasures in stunning ancient chapels. 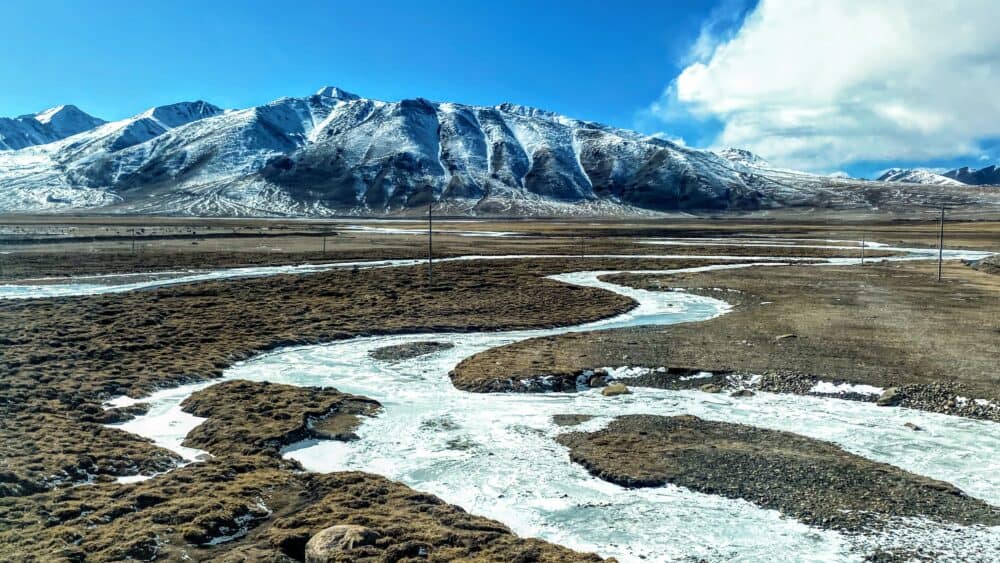 Taking the Tibet “sky” train from Xining to Lhasa offers the first-time visitor to Tibet an incredible visual introduction to the immense Tibetan Plateau. It’s the highest train journey in the world and crosses the 5072 m/ 16,640 ft Tangu La Pass. (You will want to take actions to prevent altitude sickness, as you’ll need to do everywhere in Tibet.) 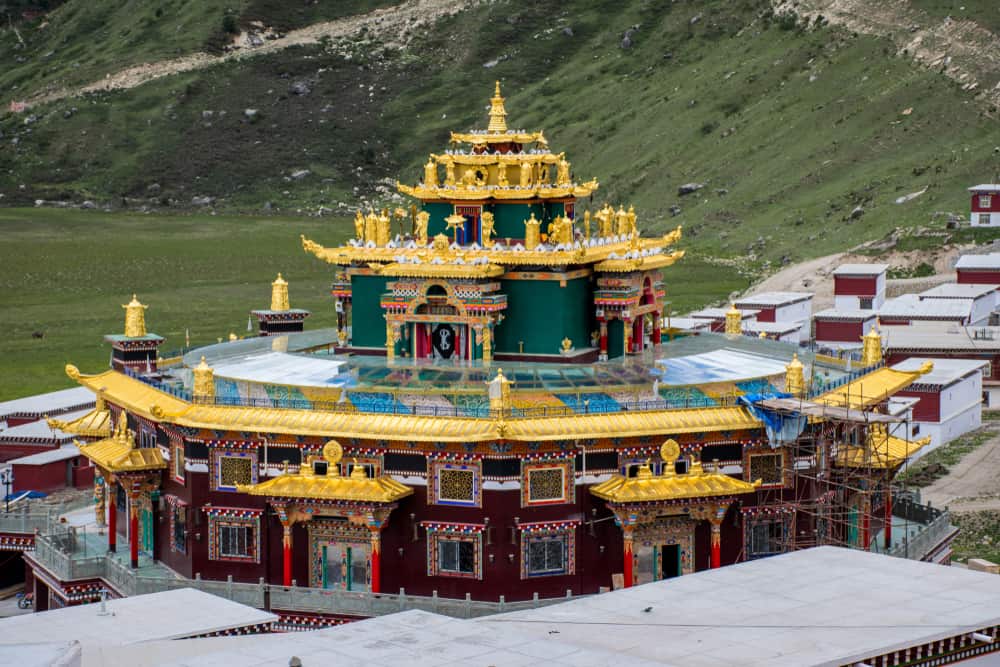 One of the great centers of Buddhist learning, Dzogchen Monastery in the Eastern Tibetan region of Kham, is not only beautiful, but also a fantastic chance to get off the beaten path. For a little adventure, you can hike up to some important, still-occupied hermitage caves dotting the hillside behind the monastery. 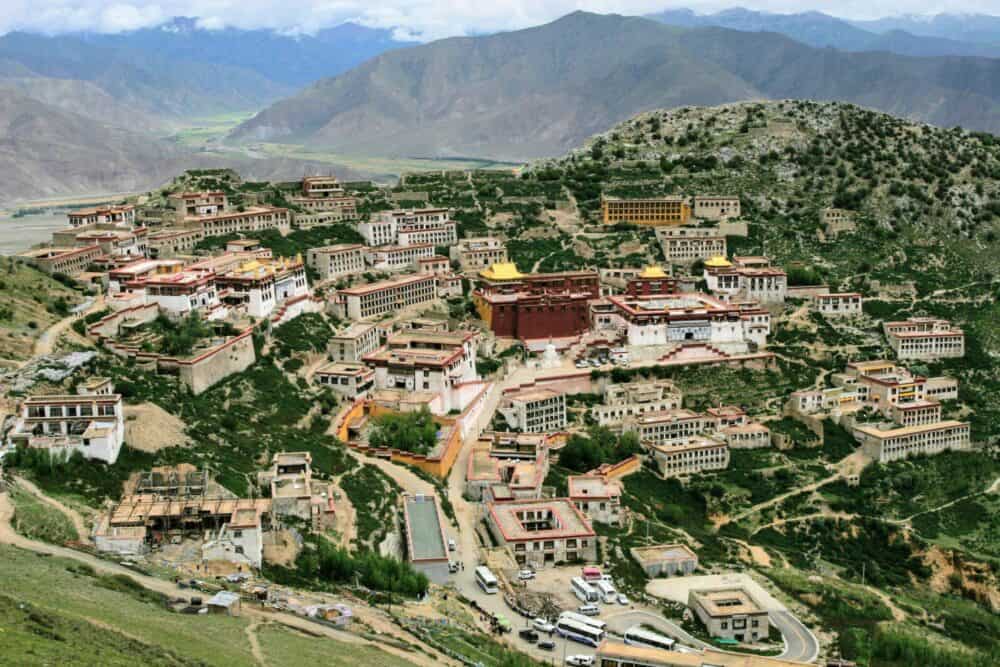 Perched like an eyrie high above the south bank of the Kyichu River, Ganden is one of the three most famous monasteries in Tibet, and is arguably the most picturesque, among some very stiff competition. For the best views, walk the pilgrimage circuit around the monastery and up to the ridge of the prayer-flag covered Wangpo Ri Mountain. 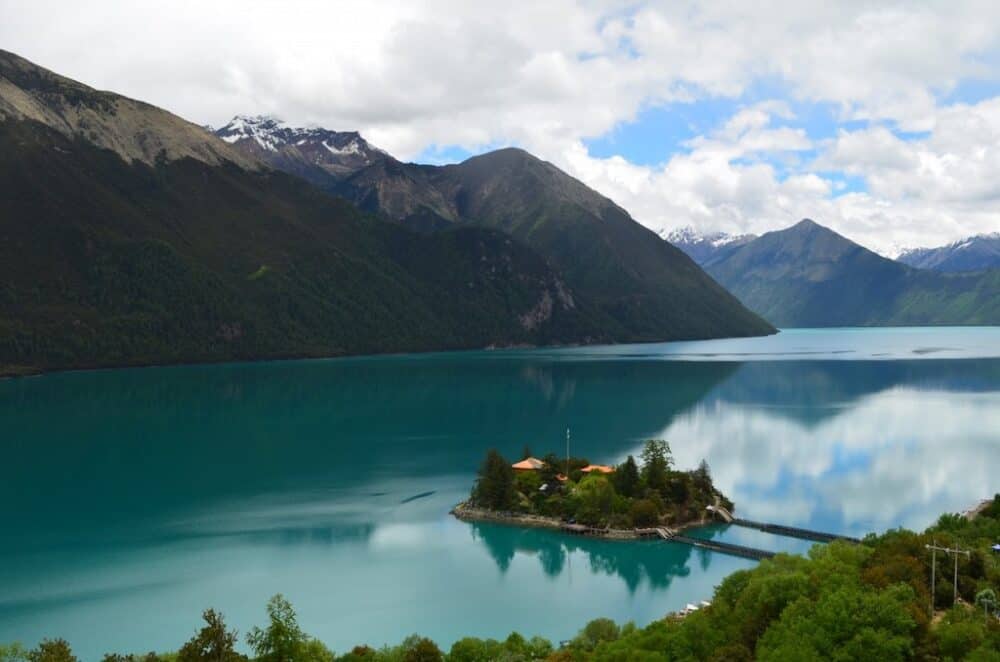 Peaks rise like walls out of the green waters of Draksum Tso (also spelled as Basum Tso) Noted for the picturesque island in its center which is home to Tsodzong, a 14th-century monastery. Two major Tibetan historical and spiritual leaders have connections to Draksum Tso — both King Gesar and Guru Rinpoche, Padmasambhava.

Larung Gar – an ocean of wisdom in Eastern Tibet 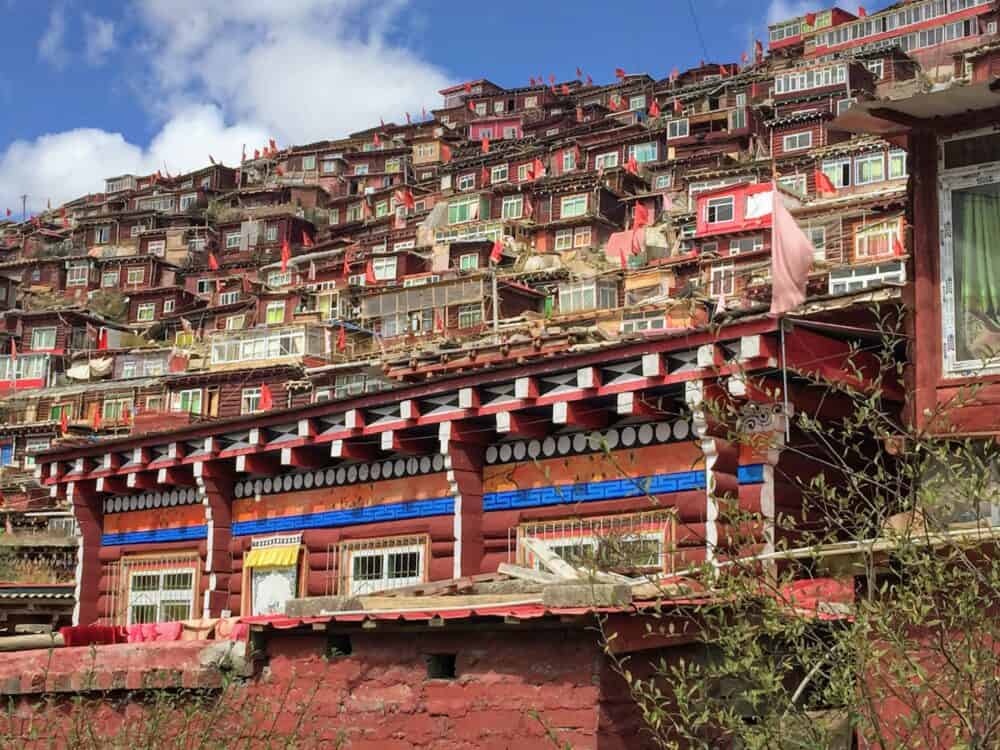 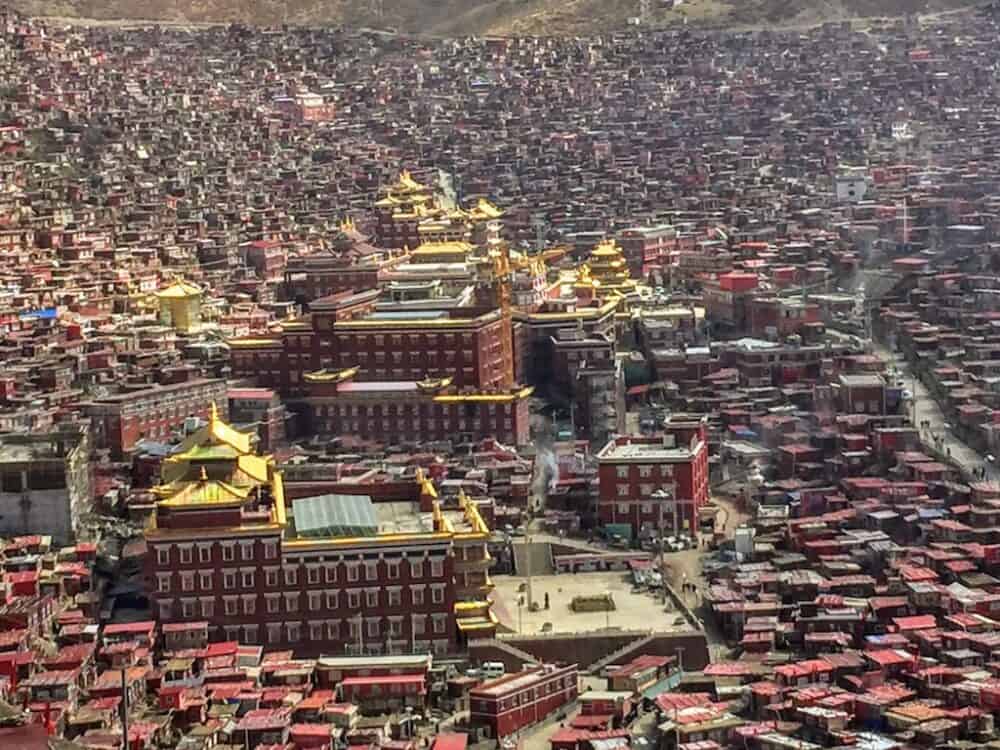 Flowing like an ocean of hand-built cabins for monks and nuns over the hills of the Larung Valley in Serthar in Kham, Larung Gar has been a wonder of the Tibetan world. Until 2016, hLarung Gar was the largest Tibtan Buddhist Institute in the world, with a population of Tibetan Buddhist nuns, monks and pilgrims of all kinds teaching and learning in a fantastic, vibrant atmosphere. Unfortunately, since 2016, the area has been restricted from visitors due to state-ordered demolitions for “overcrowding” but should it open again, don’t miss the chance to experience this extraordinarily beautiful and impressive example of the Tibetan Buddhist faith and practice.

15 of the most beautiful places to visit in Tibet is written by guest blogger Yolanda O’Bannon. She is a long-time travel writer and photographer with a special passion for Tibet and Asia. With her husband Lobsang, Yolanda makes Tibet travel simple and safe at YoWangdu Experience Tibet where you can learn everything you need for a wonderful first-time visit to Tibet.

15 of the beautiful places to visit in Worcestershire

Top 15 of the most romantic hotels in Palm Springs 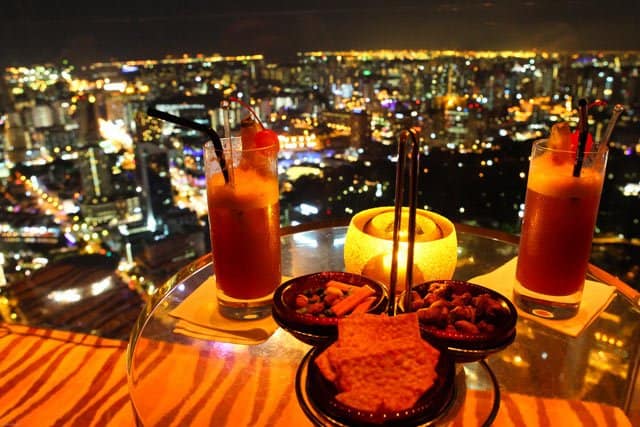 10 reasons why you should visit Singapore 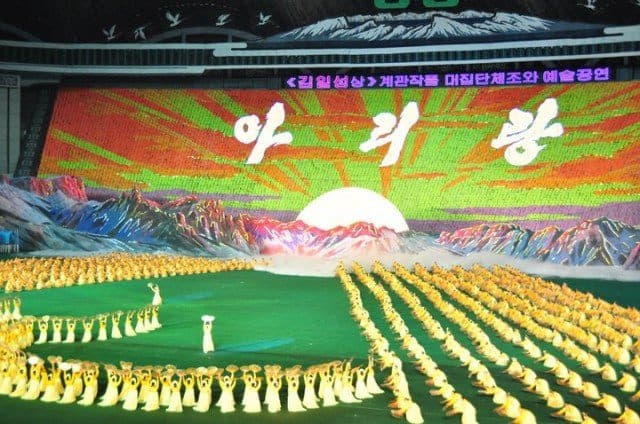 Traveling to North Korea – where normal rules do not apply