Forget the crowds, the packed beaches and the overdeveloped resorts, here is our choice for 10 of the best and most beautiful beaches in Spain…

Playa de los Genoveses, Almeria – easily one of the most stunning beaches in Spain

In the Cabo de Gata-Níjar Natural Park not only will you find unspoiled beaches bordered by high cliffs and hidden coves, but also thousands of flamingos who arrive in late autumn. You will be undisturbed by noisy bars and tourists and it is a great place to scuba dive. The park is 38,000 hectares of protected wild natural space so it is truly an untouched paradise. 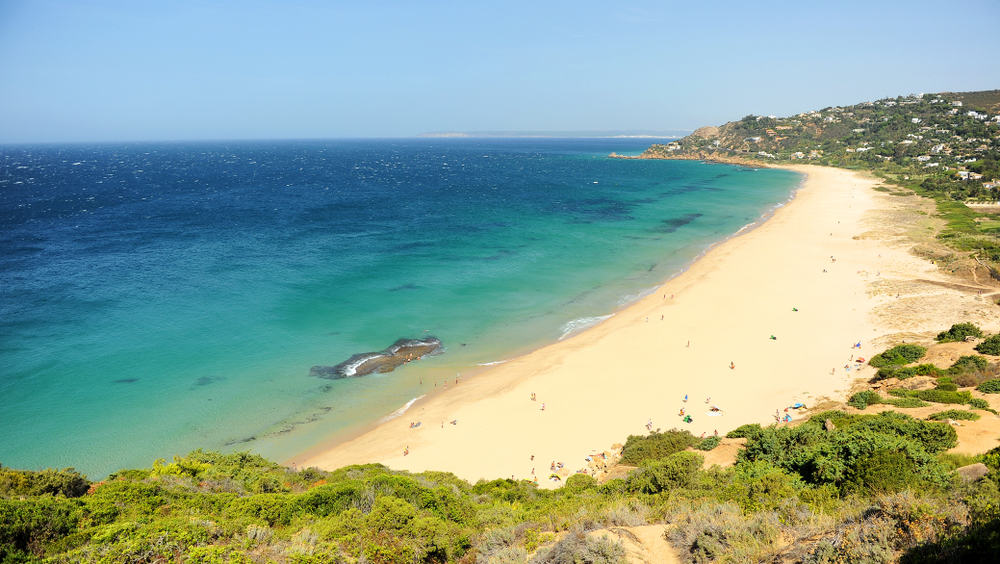 Here along the Atlantic coast you can relax on golden sand and enjoy the moderate waves which are perfect for water sports. The fishing village on the Costa de la Luz has an 8km stretch of beach which has been awarded the blue flag by the EU. There are bars and restaurants along the beachfront. The windswept beach is quiet year-round except during the high season when it fills up with tourists.

Playa del Silencio, Asturias – one of the most unpsoilt and spectacular beaches in Spain

This aptly named peaceful beach is located near Cudillero. It’s thought to be one of Spain’s most beautiful beaches for its surrounding landscape of rock formations, cliffs and meadows. The bay encloses a circle of tranquil water perfect for snorkeling.

The Alcudia Beach runs along the Golden Mile from the port. It has fine white sand and hotels overlook the beach. The water is shallow, a clear turquoise colour and is perfect for kids and paddling. See other best unspoilt places to visit in Majorca.

You need to approach this beach on foot and walk along the hill ridge. Bathing suits are optional as nudism is acceptable here. The secluded beach nestles into a gentle half-moon shape and the water is a translucent – easily one of the most beautiful beaches in Spain.

Sitges, near Barcelona – a fun and beautiful beach

With a great combination of sand, sun and sea, Sitges beaches near Barcelona have a dynamic nightlife, are popular with the gay community and there are also nudist beaches. Sitges has 17 beaches, many which have been awarded the Blue Flag.

East of Portinatx, this small bay is difficult to reach so it’s not overcrowded. You are treated to the view of the surrounding cliffs, the peaceful atmosphere and idyllic snorkeling conditions – there are no noisy water sports here.

Spain’s Balearic Islands boast the country’s best beaches, and of them, Ses Illetes on the isle of Formentera is one of the best. The wide beach is popular with tourists and has calm clear water perfect for water sports. It is easily reached by boat from Ibiza.

On the Costa del la Luz the beach sees 300 days of sun a year, making it perfect for sun worshippers. The sea is calm and the sand soft and white. From Huelva to Matalascanas the 4 miles of beach are lined with cliffs and pine trees. Definitely one of the Top 10 most beautiful beaches in Spain!

Close to the towns of Foz and Ribadeo, the beach is known for its rock formations formed by waves crashing against the cliffs for centuries. The beach is a National Monument; visit during low tide to appreciate the caves, arches and formations of the surrounding cliffs.

7 thoughts on “Top 10 most beautiful beaches in Spain”