The isolated, remote country located near the Arctic Circle is home to some of the most unique landscapes in the world, which is probably why it’s become one of Europe’s most sought-after travel destinations.

With its huge glaciers, temperamental volcanoes, powerful waterfalls, bubbling hot springs and acres of wild untamed scenery, both in summer and winter Iceland’s lonely lands are a nature lover’s paradise.

I fell in love with this extraordinary country when I visited, here are my best and most beautiful places to visit in Iceland…

1. Gullfoss Waterfall – one of the most famously stunning places to visit in Iceland

The rainy weather in Iceland makes the country unusually suited for waterfalls and Iceland is home to many. Gullfoss has made the list because of its beauty and accessibility – it’s located on the Golden Circle (the most popular tourist route in Iceland).

Literally meaning Golden Falls, Gullfoss is one of the most popular tourist attractions in the country. It’s actually two separate waterfalls, the higher one has a drop of 11 metres and the falls below have a drop of 21 metres.

2. Thingvellir National Park – another famous beauty spot in Iceland which is part of the Golden Circle

Another attraction on the Golden Circle is the UNESCO World Heritage site Thingvellir National Park.

It’s undeniably beautiful with miles of untamed Icelandic countryside and a huge crystal clear lake filled with species of fish found nowhere else, but arguably its more famous for its location.

It’s based at site of a rift valley marking the crest of the Mid-Atlantic Ridge. Divers and snorkellers take advantage of the lake’s amazing visibility to see the Eurasian and American continental plates slowly tearing apart below.

3. Geysir – one of the most famous attractions on the Golden Circle

The third attraction on the Golden Circle is the hot spring area which is home to the original Geysir (which gave its name to all the others).

The Great Geysir is now sadly inactive but thankfully the next biggest, ‘Strokkur’ still obligingly spews hot water as high up as 30 metres every 10 minutes.

During the winter month’s you’ll probably freeze standing around waiting for it to erupt but luckily the geothermally active area – with its unusual colours and bubbling sulfurous mud pots – is pretty enough to keep you distracted.

Yes it’s a tourist trap, yes it’s man-made (it’s been dug out and filled with the outflow from the nearby Svartsengi thermal power station) but there really is nowhere else like it on earth.

It also deserves a place on the list because the geothermal spa with its thick mist which swirls over milky-blue water set against a background of black lava landscapes has a surreal beauty, and is definitely a place everyone has to visit at least once in their life.

5. Reykjavik – the unique capital is one of the best places to visit in Iceland

I can’t write a list of the best places to visit in Iceland without mentioning their unique capital. Small, and compact but yet packing a real punch, the world’s most northerly capital is nothing short of extraordinary.

It’s a great place to explore in Iceland in both summer and winter but in winter it takes on new beauty bathed in a pink hue with a background of snow-capped mountains.

It’s a place with a fun and vibrant atmosphere with a fondness for partying, and a canny eye for design.

While staying in the capital you must see the city highlights which include the Harpa Reykjavik Concert Hall, the iconic city view from Hallgrimskirkja church, the Sun Voyager sculpture, and their collection of cool Reykjavik hotels, quirky bars, shops, and museums. 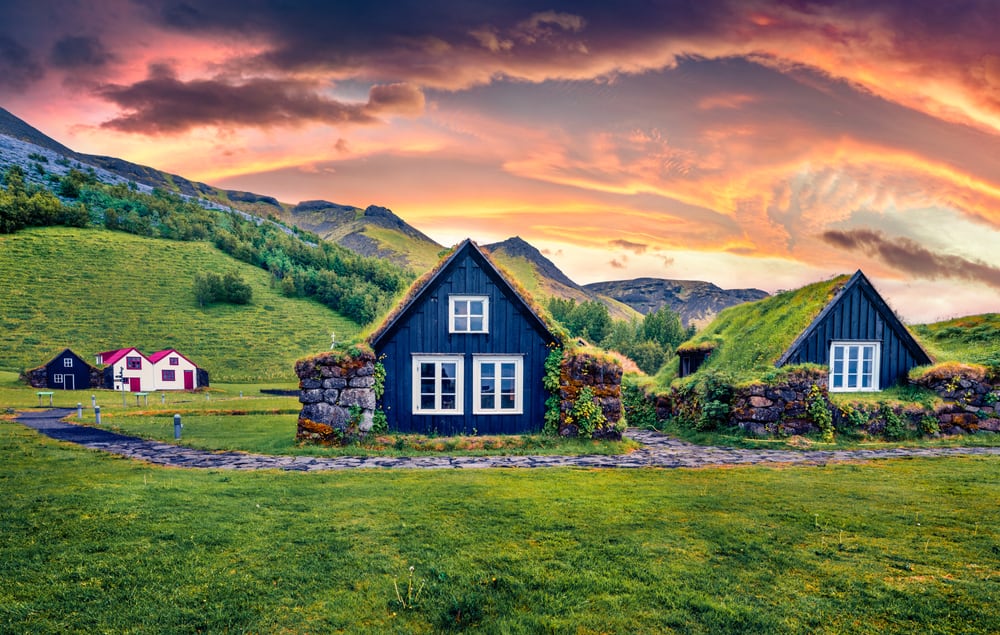 Head to Skogar village in South Iceland and you’ll find these intriguing and super-cute turf top houses. The houses are part of a folk museum and they’re there so you can experience how Icelanders lived through the centuries.

The Turf houses are covered in a turf known as sod and keeps the houses warm and blending into the Icelandic landscape.

Iceland is so famous for its volcanos so you’ll have to include at least one on your itinerary. Head for Askja, a sunken crater located in a central volcano in the Dyngjufjöll Mountains.

The landscapes here are so remote and lunar-like that it’s actually where US-astronauts trained before landing on the moon in 1969.

Once there make sure you scramble down the crater’s stark sides to take a quick dip in the milky turquoise geothermal lake (Víti) below.

This Icelandic beauty spot has a pretty remote location in the far eat of Icelands but both nature lovers and photographers absolutely love this place due to the lack of light pollution and the stunning way the striking black mountain juts out of the landscapes and reflects in the lagoon below.

Vestrahorn is 454 metres high and unique black sand dunes and grasses line the causeway, changing with the winds and seasons. It’s also a great spot to see the Northern Lights – otherwise known as the Aurora Borealis – and the night sky.

This is a pretty town home to an excellent natural harbour, typical coloured houses and a pretty incredible mountain background.

Like most towns in Iceland, there are not loads to do here but the town is mostly visited because it serves as the gateway to the popular and beautiful Westfjords which are filled with untouched landscapes and dramatic features.

The ferry to Flatey Island also leaves from Stykkisholmur and this is a place worth visiting for its almost unearthly beauty, its small community, and its Atlantic Puffin colony.

Not many visitors reach as far as Iceland’s Westfjords – it’s one of the most remote corners of Europe – but the ones that do won’t be disappointed.

Don’t expect to see too many people hanging around, this area is very sparsely populated and only connected to rest of the country by mere 7 kilometre wide strip of land.

If you’re thinking of heading out this way make sure you plan your trip well, Casamundo.co.uk  offer holiday rentals in this remote area (starting from €276 a week).

This area in North East Iceland is home to extraordinary landscapes that are so surreally beautiful they look very lunar-like!

The lava fields in the geothermal valley Leirhnjukur, near Krafla volcano and lake Myvatn. are active and a place to spot mud pots, bubbling hot springs and fumaroles.

12. The Jokulsarlon Lagoon – a very scenic place to visit in winter

Although it’s a fairly lengthy five-hour drive from Reykjavik this place rates consistently high as a beautiful natural attraction in Iceland.

The lake was formed after the glacier started receding from the edge of the Atlantic Ocean and its recently grown so much it’s now the deepest lake in the country. Charter a boat tour to float among glacial icebergs before they break off and get swept off down the channel into the sea.

13. Reynisfjara Beach (Black Sand Beach) – a famous spot to take a trip to in Iceland 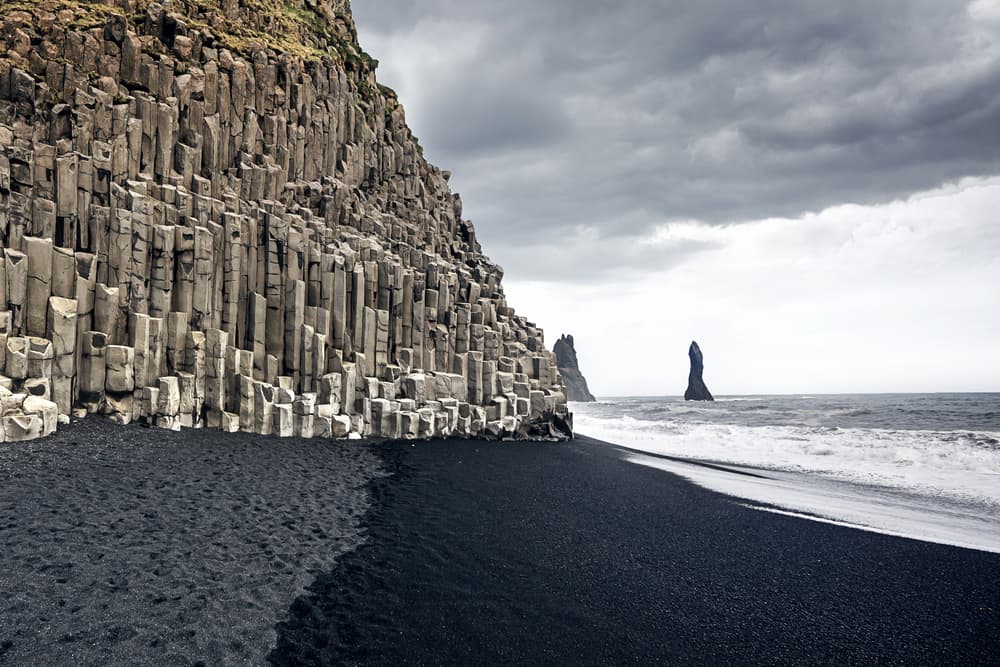 This is one of the most unique and surreally beautiful places to explore in Europe. Located in the small coastal village of Vik (around a two and half drive from Reykjavik), the beach here is made from pure black sand.

The strangely coloured sand was formed due to a volcanic explosion.

With giant basalt stacks, feisty Atlantic waves, and stunning panoramas, this beach is a famous Icelandic must-see and in 1991, National Geographic voted Reynisfjara as one of the Top 10 non-tropical beaches to visit on the planet. 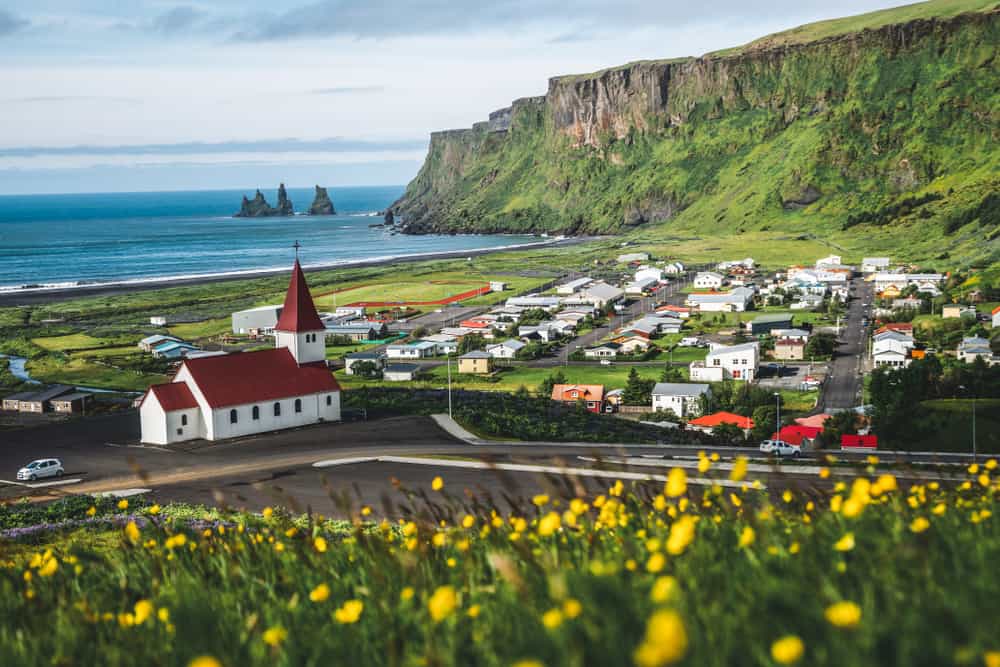 Pretty Vík í Mýrdal is the southernmost village in Iceland, and enjoys a beautiful position on the seafront (the black beach mentioned above is located here).

Despite its pretty remote location, it’s a popular place to visit due to the extraordinary volcanic beach located, the basalt columns, the wooden church which dates back to 1929, and also the scenic attractiveness of the town itself.

Also nearby is the cliffs of Reynisfjall mountain which is home to a number of seabirds including puffins and the very photogenic large rock arch located on the Dyrhólaey peninsula. 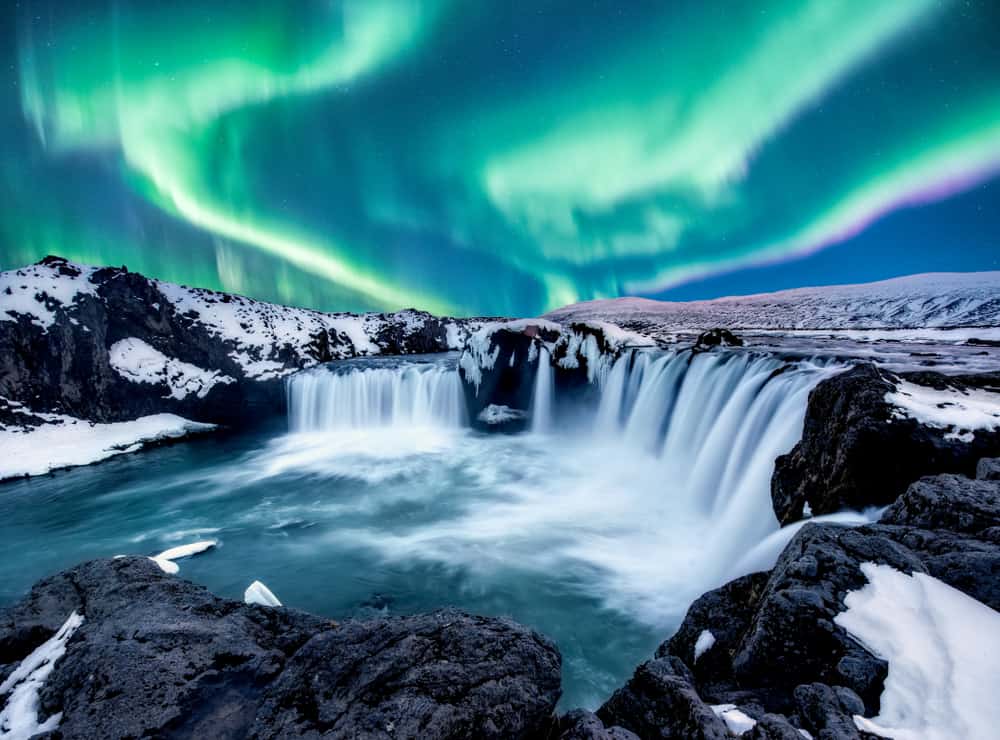 This is a seriously stunning place to visit in Iceland in both summer and winter, it’s also pretty accessible as it’s located along the country’s main Ring Road in Northern Iceland.

Nicknamed the“Waterfall of the Gods” the horseshoes-shaped falls from a height of 12 metres over a width of 30 metres.

16. Landmannalaugar – a vast area of stunning and unique beauty

This is another popular destination and like most of Iceland’s natural attractions, it has an unearthly beauty.

Although don’t plan your trip during the winter months, this site is only accessible in summer but in this season it’s a good idea to plan a few walking trips as it’s easily one of the most amazing hikes to take in Iceland.

17. Skaftafell National Park – a breathtaking collection of peaks and glaciers

Skaftafell with its ice-blue glaciers, lush green meadows, attractive waterfall, and tall mountains is definitely no slouch in the epic landscape department.

Located in the South of Iceland, the area now forms part of the larger Vatnajökull National Park but still has its own visitor centre to represent it.

A peaceful unspoilt area, the park mostly draws hikers, climbers, and wildlife watchers looking to catch a glimpse of many species of birds and native arctic foxes.

18. Husavik – one of the prettiest towns in Iceland and a great place to visit in summer 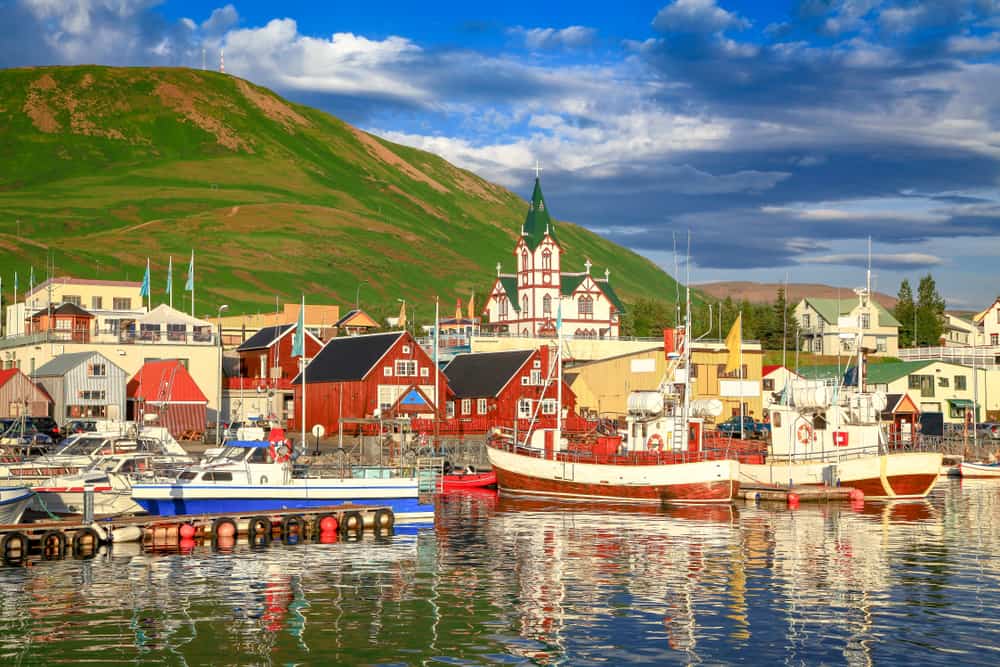 This is easily one of the most attractive towns to explore in Iceland and it’s also the oldest settlement in the country too.

Towns in Iceland are always small and compact and easily explorable on foot.

Head here for the scenic waterfront views and also the whale watching tours in Skjálfandi Bay – Husavik is often referred to as the Whale Capital of Iceland. 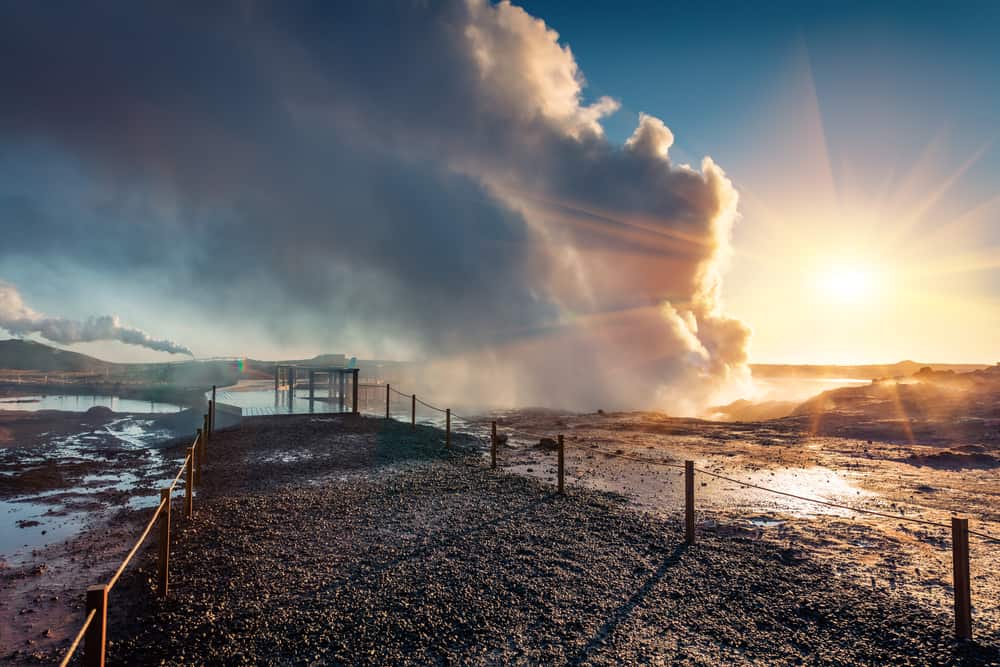 It’s best to take in as many of the hot springs as you can when you’re touring around Iceland and this little beauty is 65 feet wide and constantly spews out billowing cloudy steam at a temperature of 570?F.

Located in the Reykjanes peninsula, this is located near the airport and Reykjanes lighthouse.

Take your camera and marvel at the unique landscapes that Iceland is famous for. Here you’ll see volcanic rock, boiling mud pools, and steam vents, enjoy!

This is a popular place to visit in Iceland as it can be included as the first stop on a tour of the famous Golden Circle route.

Iceland is famous for its unusual crater lakes, but one of the most visited and attractive is Kerid – a volcanic crater lake located in the Grímsnes area in south Iceland.

Like many of Iceland’s attractions, it’s a pretty surreal sight; the pool has a brilliant aquamarine colour and the surrounding steep barren walls give it an almost lunar-esque feel.

21. Jökulsárgljúfur National Park – one of the must beautiful sights in Iceland

This is another national park that now forms part of the larger Vatnajökull National Park. It lies to the north of Iceland and is based around the river Jökulsá á Fjöllum.

Definitely one of the most beautiful places to visit in Iceland, it’s known for its volcanic mountains, several exceptional waterfalls including Dettifoss, (Europe’s most powerful waterfall), endless rock formations and Jokulsargljufur Canyon – one of the largest and most impressive river canyons in the country. Enjoy!