It’s the city that never sleeps and the capital that has something for everyone, whether you’re a foodie, a cocktail connoisseur or a vintage-store hunter. Although to really get a feel of New York, head straight out of the tourist zones and explore the local neighborhoods instead. Brunch away the day and then drink away the night in some of the coolest spots in town. Here is our Top 10 of the best neighborhoods in New York… 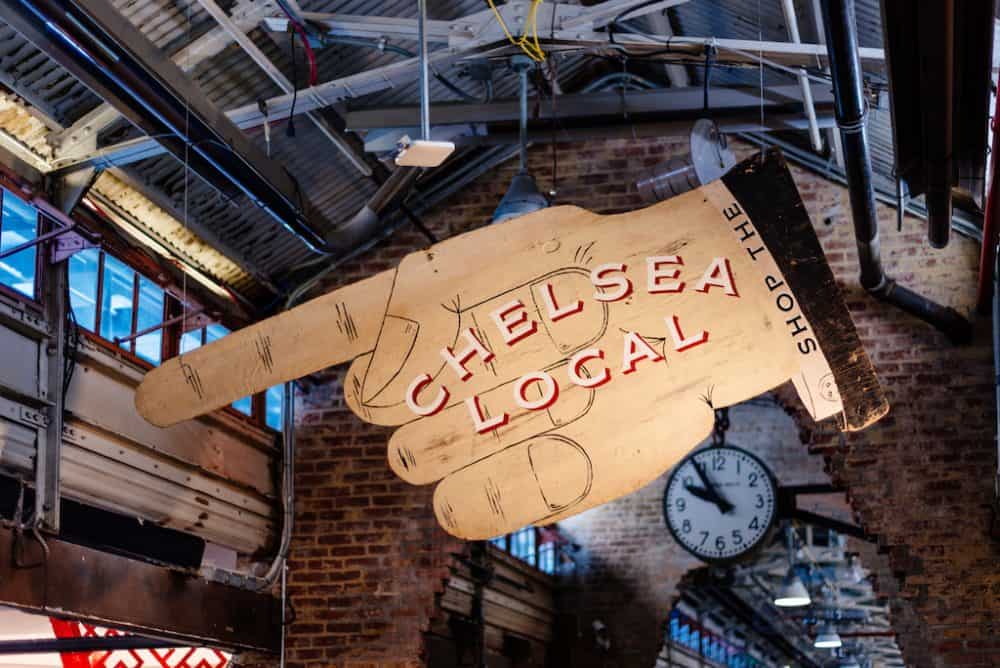 Chelsea is the bustling vibrant section of the city nestled between Hudson River and Sixth Avenue. Once heavily associated with the writing and artist communities that lived here, this neighbourhood still retains that artistic slant. The Western Edge has a rich gallery scene and has a number of top quality restaurants worth shouting about. The popular Chelsea Market is a hit with foodies. Throw in the trendy clubs, the thriving Sports Complex and the Harbour Cruises and you have one action-packed neighbourhood. 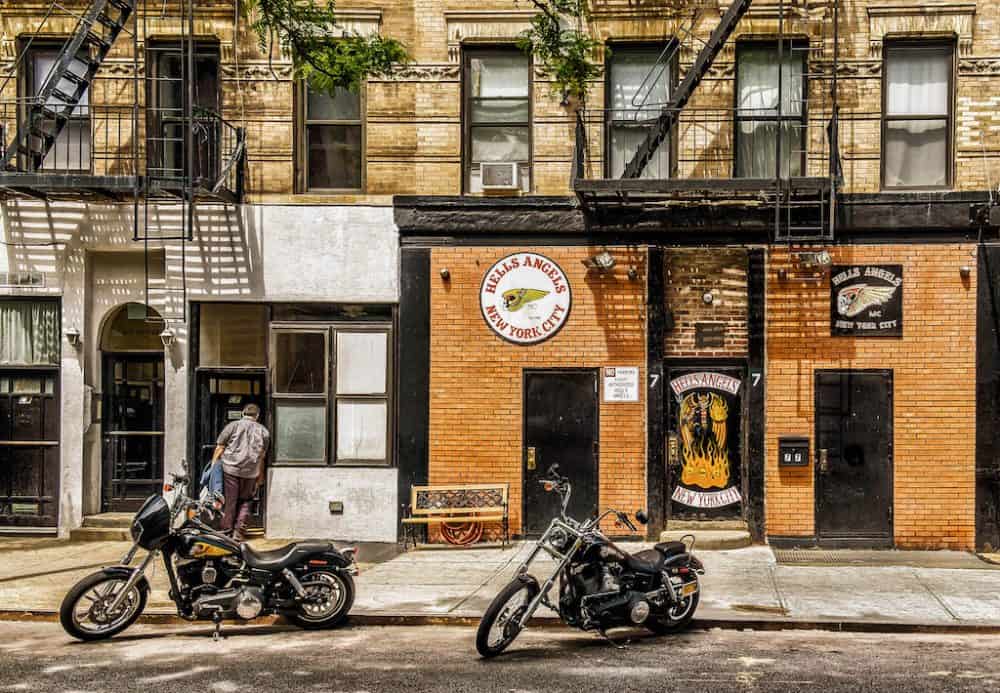 The general vibe to this area is bohemian and avant-garde. The small side streets are brimming with vintage clothes shops, art boutiques, small independent book and record stores and Veniero’s a fabulous traditional Italian sweet shop. Architecturally you can expect a plethora of antiquated buildings, noteworthy examples being the abundance of churches and synagogues. If you enjoyed The Godfather 2, you may fancy taking a stroll between Avenues A and B of Sixth Street where aspects of the film were shot. As well as some trendy and hip hotels in NYC, there is also a thriving alternative arts scene, and a healthy supply of cool restaurants and bars. 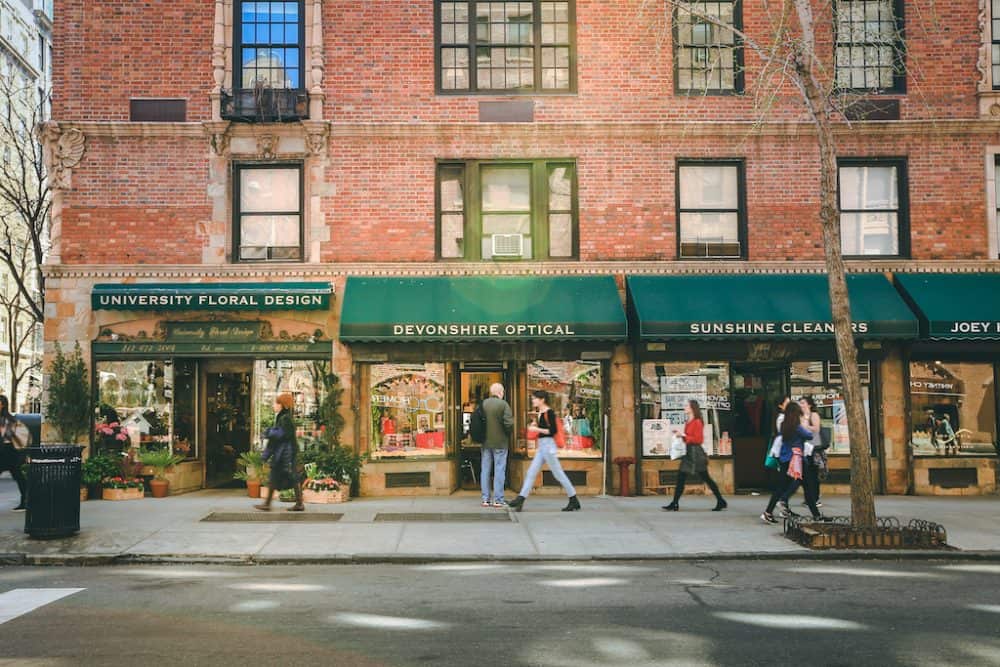 Greenwich Village’s associations lie in it being the epicentre of New York gay culture, its bohemian vibe and its popularity with students and young professionals. It has a definite town-within-a-city feel to it, with its winding street and intimate restaurants. The newly vamped Bleecker Street is bursting with haute couture boutiques which add a different aspect to the street performers and cultural mix at Washington Square Park. The infamous Blue Note jazz bar is a popular night time haunt, whereas the gourmet markets and walking food tours attract a lot of food fanatics. 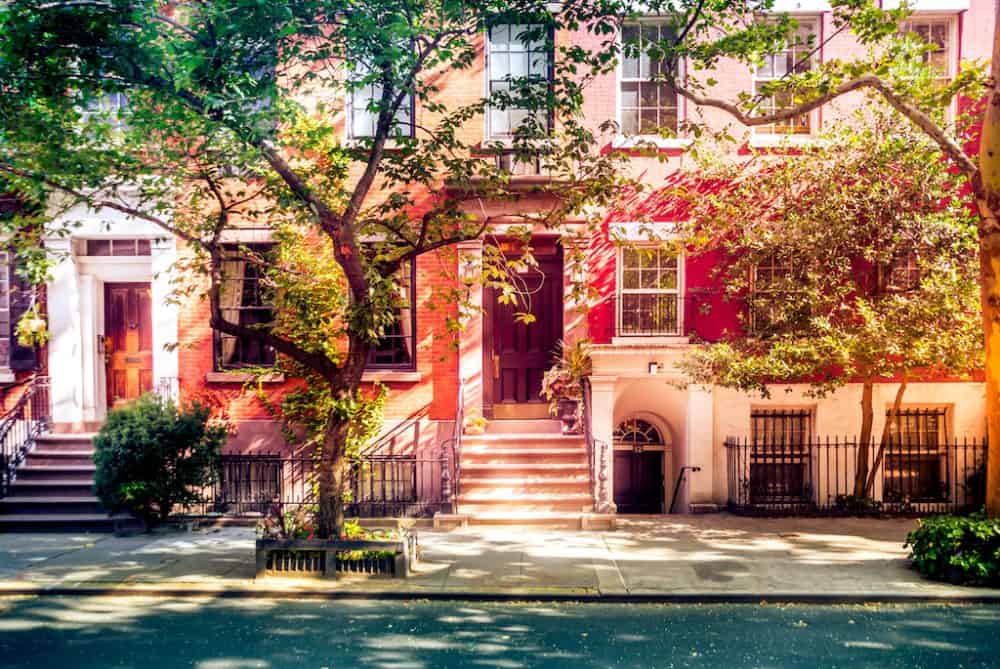 The Western portion of Greenwich Village is known simply as West Village. Although it still has many of the colourful characteristics of Greenwich Village, it still has its own distinct flavour. There is a strong bohemian vibe, with the White Horse Tavern where Dylan Thomas supposedly drank himself to death, The Northern Dispensary that treated Edgar Allen Poe and Patchin Place which once homed a variety of creative types including Thelonious Monk and Miles Davis. Also check out the Whitney Museum of Art and Cherry Lane Theater which boasts the accolade of being the oldest continually running theatre away from Broadway. 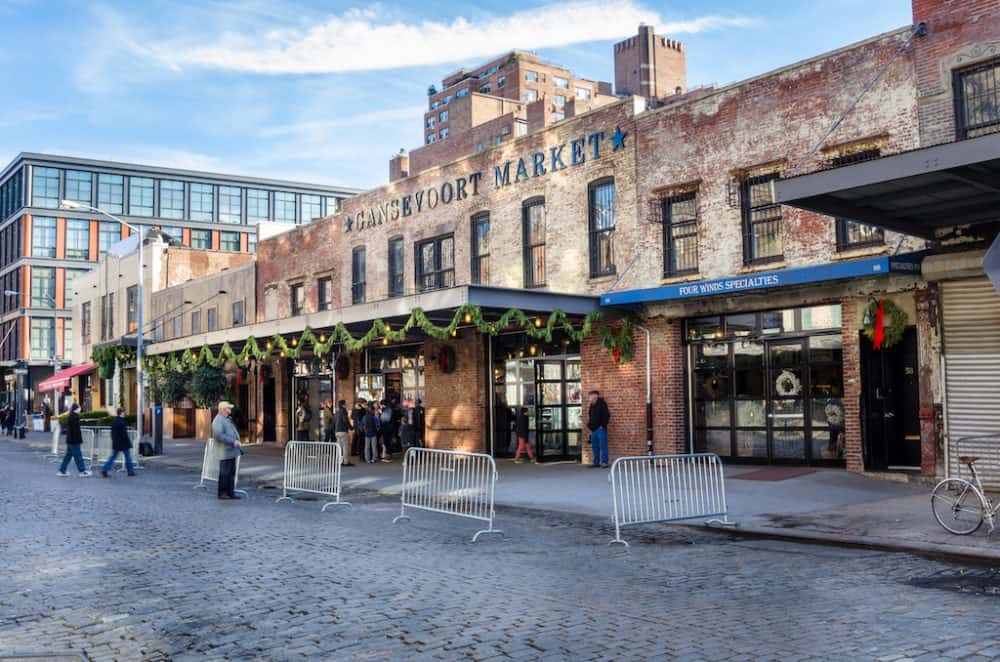 Officially named Gansevoort Market, the Meatpacking District is so-called because of its once exclusive use by wholesale meat companies. The area has moved on along way since these times, but the name stays and offers an ironic twist on this place that is densely populated with models and bright young things. There is an achingly chic air to the neighbourhood with its decadent club scene, uber-hip restaurants and bars and high-class fashion boutiques. The reclaimed railway track of Highline Park offers superb views over this area of the city and has a peaceful vibe to it. 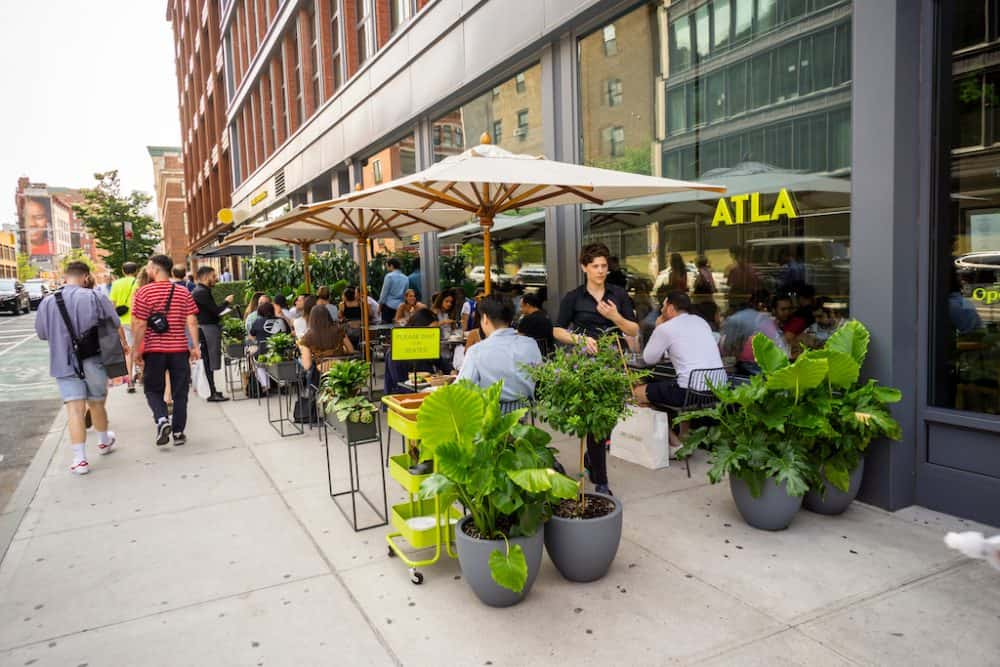 The area North of Houston Street is known by New Yorkers as NoHo. Due to a massive increase in real estate prices in Soho a lot of small independent stores relocated to NoHo. This makes it the perfect place to find one-off buys and peruse reasonably priced produce. This can be a welcome change in a city like New York that is full of top-end boutiques and high fashion stores with exorbitant prices. 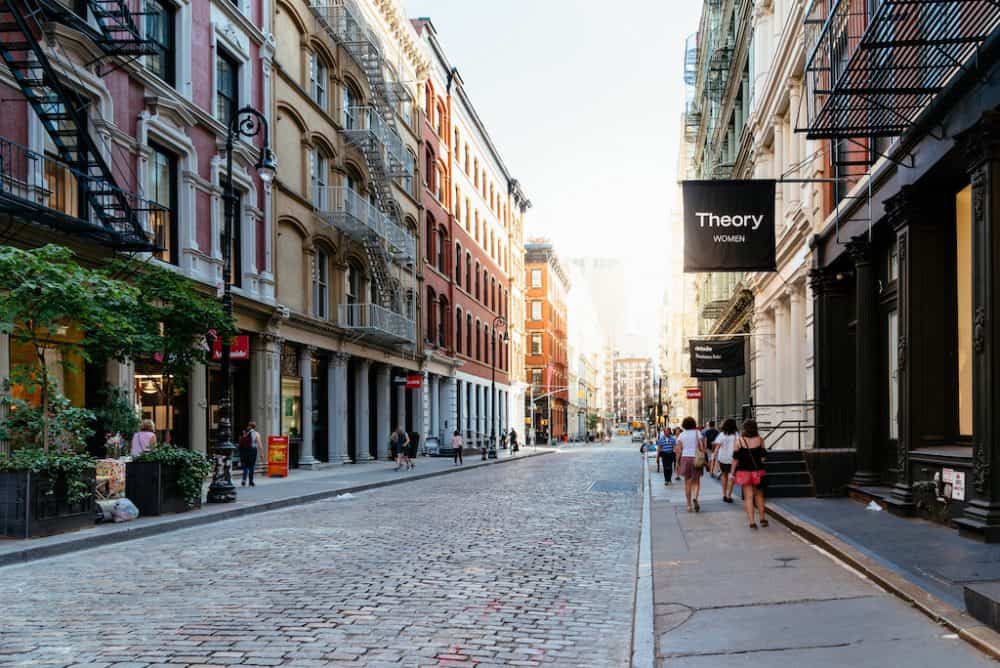 Soho (South of Houston) was once famed for its thriving gallery scene and abundance of artists. In the 1970s every warehouse, loft and factory had been transformed into a gallery or studio. Things have evolved a lot since then. The majority of the galleries have relocated to west Chelsea and been replaced by upmarket retail chains. A scattering of the former artistic residents still remain, but this area is more associated with shopping nowadays. 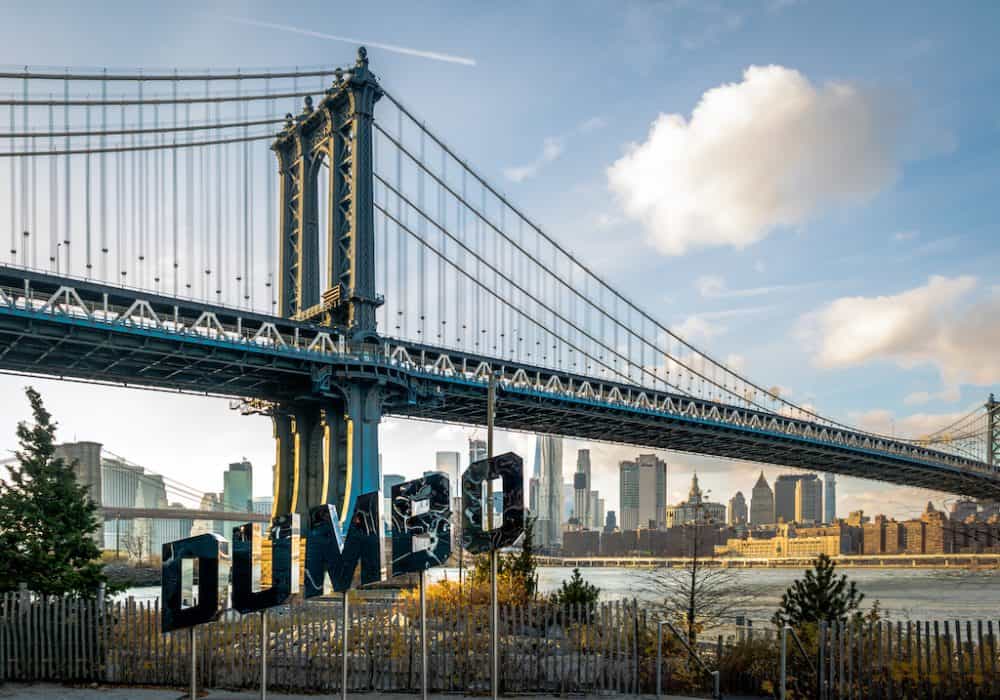 Another acronym, Down Under the Manhattan Bridge Overpass has the feel of how Soho used to be with its quaint cobble streets, galleries and small stores. The Manhattan skyline is a marked feature, and there are plenty of riverside cafes and restaurants to visit which display this view. There is an ice-cream factory, New York Water Taxis and a number of high-end condos, but it’s the water that is the main feature here. If you’re visiting and want to save on the watery forms of transport then try the New York Water Taxi here. 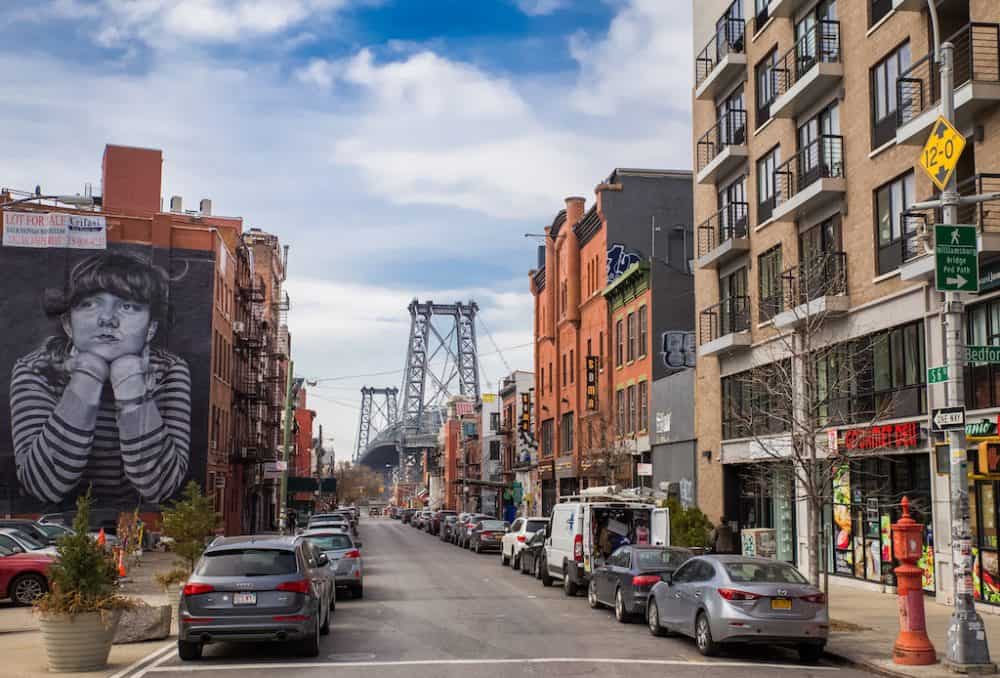 A thriving hipster scene has fled Manhattan and set up camp in North Williamsburg and these trendy youngsters portray a lot of the flavour of the neighborhood. A shopping and foodie paradise, there is a diverse array of different restaurants and stores to choose from and the odd striking street-art mural or two. There is a park located alongside the river which is known locally for its gorgeous views. In the South, you can find the world-famous Peter Lugars Steakhouse and the striking Hasidic Jewish neighborhood which is definitely worth a visit. 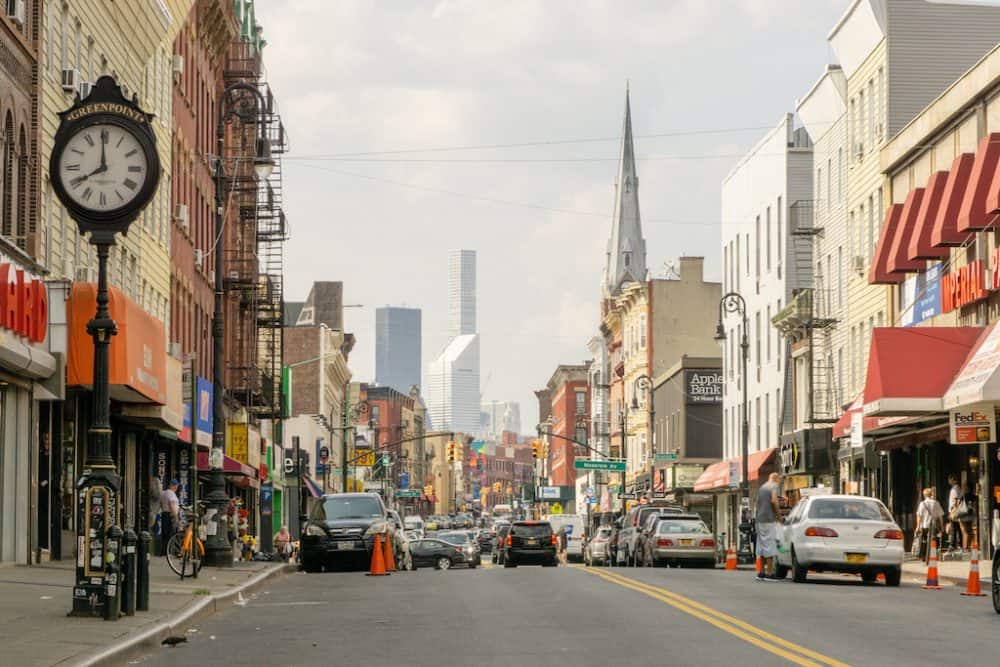 There is a strong community feel to Greenpoint with its clusters of shops and quaint townhouses. The area has been populated by a dense Polish community for some time, and in recent years a number of young American creative upstarts have moved in. The relaxed fusion of cultures and the suburban vibe, make it a very enjoyable place to visit. The stores are eclectic and unconventional with a strong artistic streak.  There is a definite sense of creativity in Greenpoint as well as pleasant views of Manhattan and a great selection of restaurants and eateries. 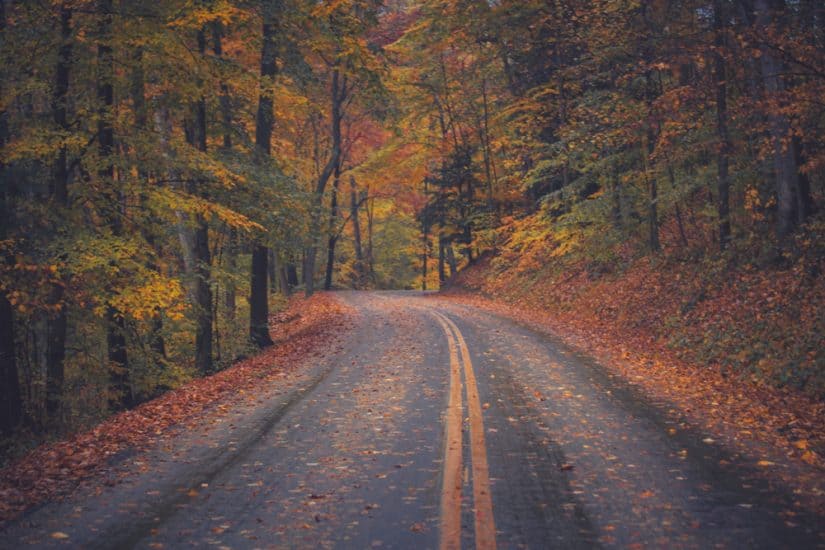 Top 16 of the most beautiful places to visit in Ohio 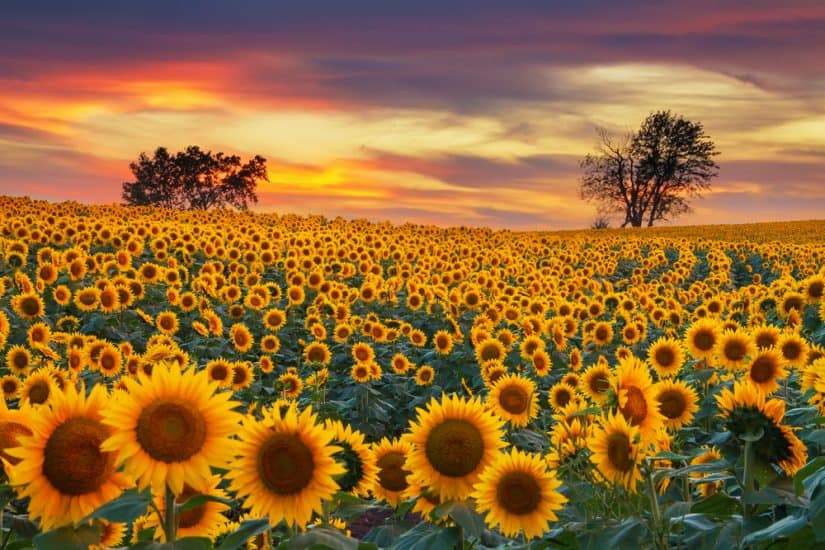 Top 15 of the most beautiful places to visit in Kansas 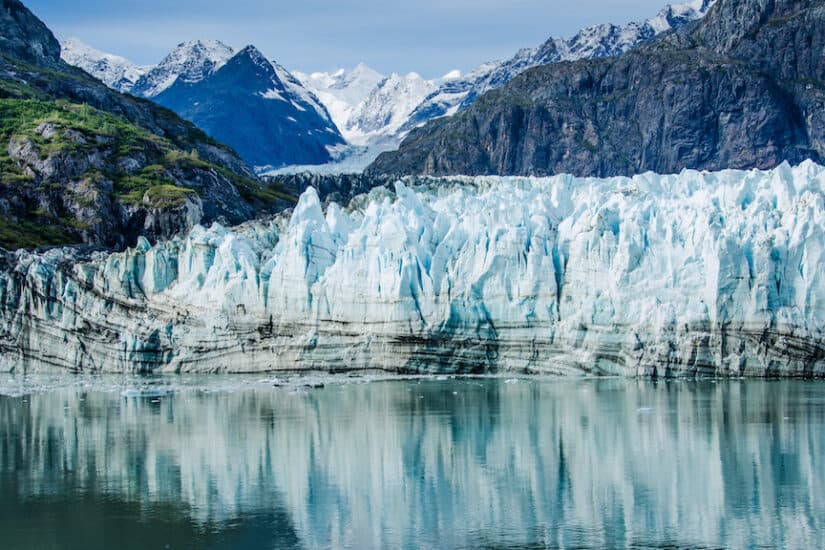