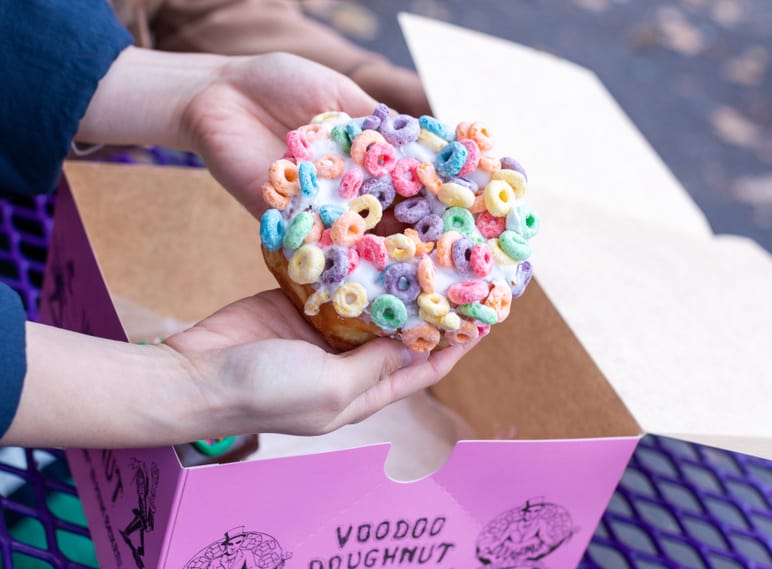 Portland has sneakily become quite the place to head to for donut lovers, maybe because it’s home to an increasing amount of legendary shops.

Portlanders also can’t get enough of their morning coffee accompanied by a delicious, straight-from-the-oven doughnut.

From baked beauties adorned with colorful sprinkles to traditional iced donuts filled with jam, here’s a roundup of the best places to buy donuts in Portland, Oregon… 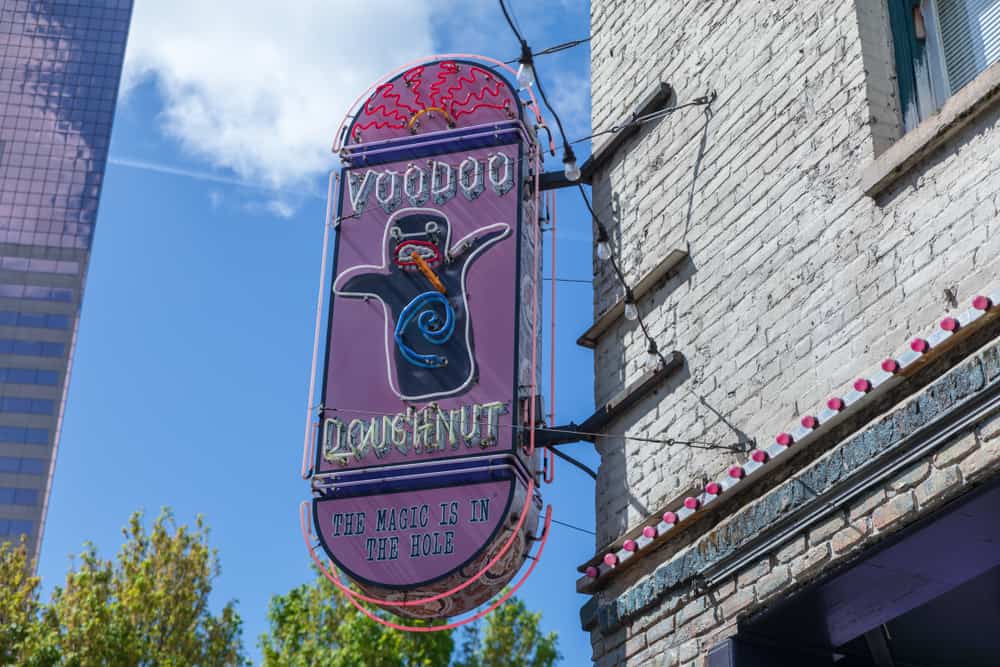 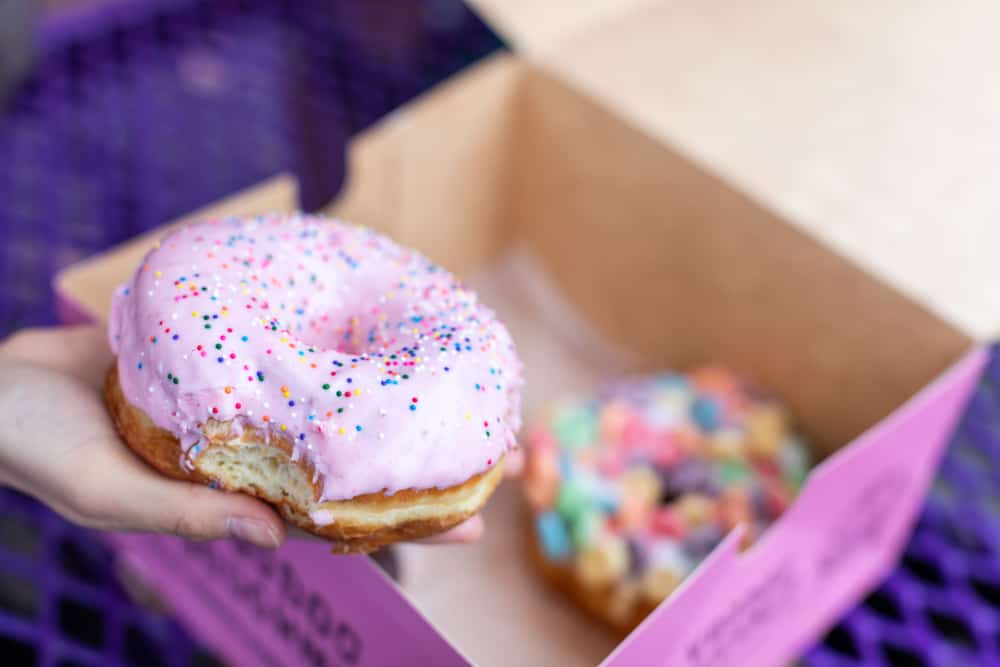 Located on SW 3rd Avenue in Old Town, Voodoo Donots earns plenty of praise online for their innovative doughnuts and other treats, including ones with icing piped on in the shape of trucks and cars and other quirky items.

Voodoo Doughnut was founded in May 2003 by Kenneth “Cat Daddy” Pogson and Richard “Tres” Shannon III and has since opened in cities all over the USA thanks to its huge popularity.

It’s been called ‘the happiest place on earth (other than Disneyland of course)!

The coffee and other hot drinks get lots of thumbs up too. Served in a traditional diner setting, Voodoo hearkens back to the days of vintage diners that pour endless cups of delicious, steaming Joe – nothing better first thing in the morning.

Just be prepared to queue during peak times at this legendary donut shop but don’t worry it will be worth the wait! 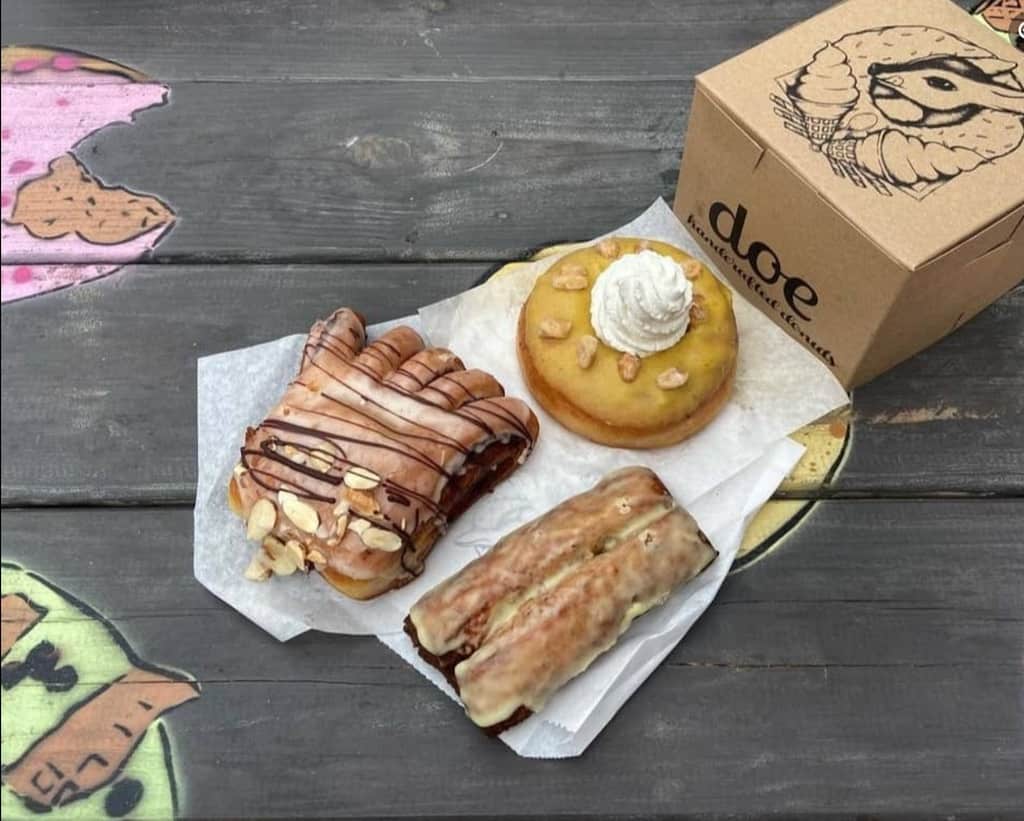 Offering some of the best vegan donuts in Portland, this donut shop on NE Sandy Blvd. Is open Monday to Thursday, 8 a.m. until 4 p.m., and Friday and Saturday from 7 a.m. until 6 p.m.

Everything on the menu at Doe’s is vegan, and even folks who aren’t strictly non-meat and dairy eaters love the doughnuts here.

But there’s more on offer than donuts – there is ice cream and there are seasonal sweets, too.

Consider candy crush or pink peppermint for your non-dairy ice cream, or a classic doughnut with your coffee, perhaps a chocolate glazed or pumpkin spice?

If you fancy something savory, opt for a “sloppy doe,” a doughnut without the usual heaping amount of sweetness, or the more gooey and always delicious buttered rum and coke flavor. Now that’s creative doughnut making! 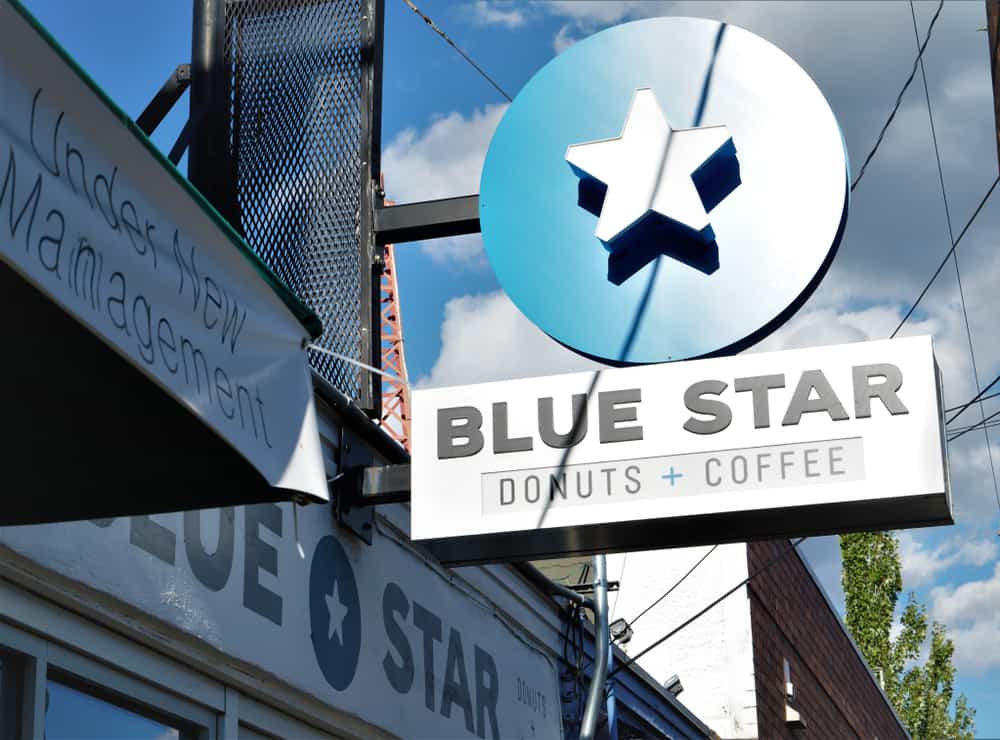 One of the most famous and popular donut shops in Portland, this cozy spot on SW Jefferson Street offers plenty of favorite doughnut flavors, including glazed varieties, some with sprinkles and other tasty treats.

But the location bases its goodies on a traditional recipe from the south of France, so the doughnuts have a nip of taste that’s reminiscent of French brioche – a specialty of the house.

The cake donuts are gluten-free and vegan, for those who enjoy a healthy take on classic doughnuts. Try the buttermilk old-fashioned doughnut, an apple cider fritter, or any one of the many creative flavors that are baked with organic, local ingredients.

Open Thursday to Monday from 7 a.m. until 2 p.m., Blue Star will ship goodies anywhere you like, providing your order is $75 (USD) on your order. 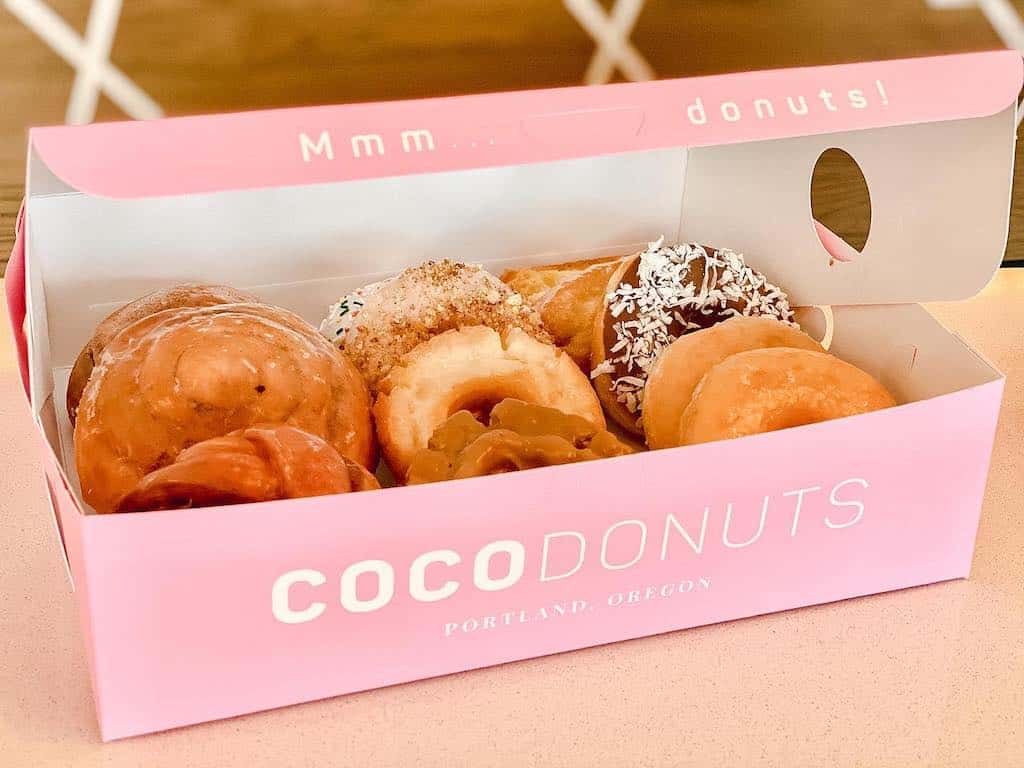 On the weekend, it opens at 7 a.m. and remains open until 2 p.m. Come for one of the classic doughnuts, but stay and eat it with some of the neighborhood’s best coffee.

Simply, homey and welcoming atmosphere – the perfect place to indulge in your favorite doughnut.

5. Heavenly Donuts – one of the most popular places to pick up donuts in Portland

Offering some of the best donuts in Portland, this spot is located on North Lombard Street, and is open for business 24/7, making it a popular destination for late-night sweet cravings when heading home after the club or a neighborhood party.

The doughnuts are traditional – maple glazed, apple fritters, and caramel frosted – and all get raves in online reviews. This doughnut shop also has locations in California and Washington, so obviously the bakers are doing something right. 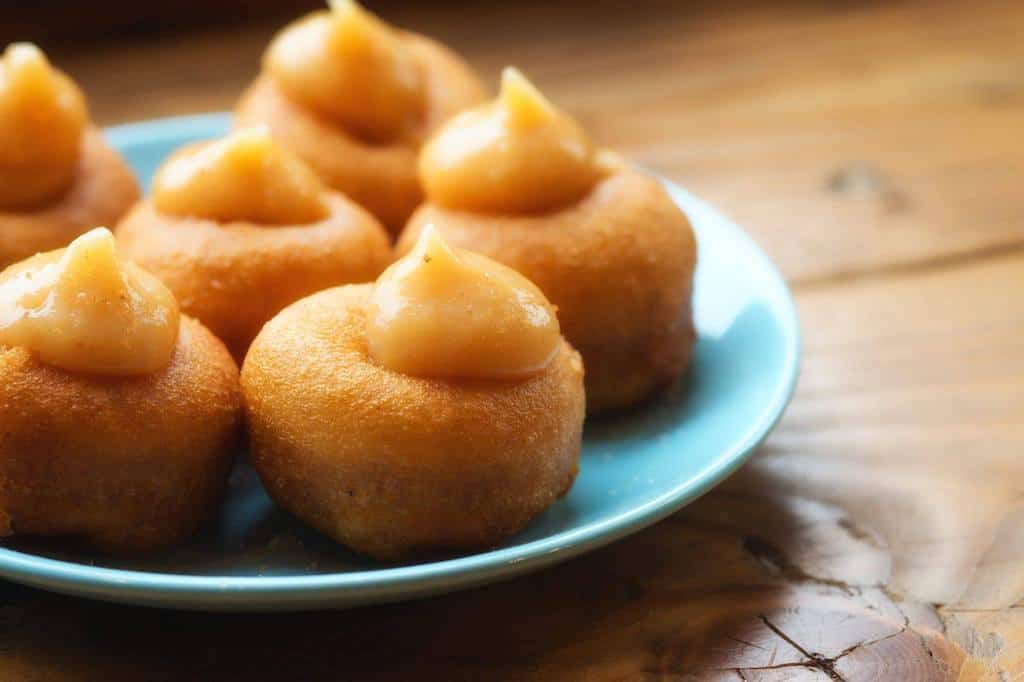 Locals and visitors alike line up for the treats and chai served at Pip’s, so you just know they have lots of wonderful treats on offer.

The speciality of the house are mini, fried on-the-spot doughnuts, so be sure to save room for a couple of these, even if you order something more traditional, like a raspberry fritter.

To avoid lining up, go early and make a doughnut your breakfast. Located on NE Fredmont Street, opens daily at 8 a.m.

7. Donut Queen – a bakery that specializes in donuts in a variety of flavors made daily onsite 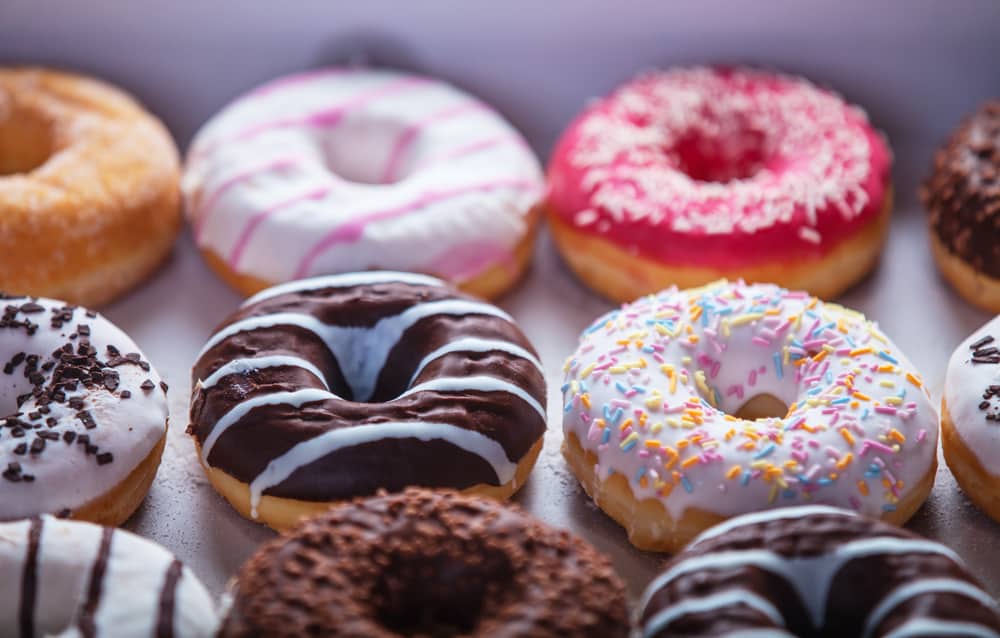 This is a simple, plain, old-fashioned shop located on Burnside Street, and the doughnuts they make are raved about by locals and visitors for exactly that reason.

Donut Queen is all about making great doughnuts, and they come in every variety, like glazed and jelly filled and just about every other kind you can imagine.

One customer says it even “smells great!” the moment you walk in this shop – is there higher praise than that? The store opens every morning at 8 a.m., and pretty much stays open until the last doughnut is sold.

That could be three o’clock, or that could be eight o’clock. But why risk missing out? Get to Donut Queen early, and get your doughnuts for the family (or your coworkers) straight from the oven. Easily some of the tastiest donuts in the city of Portland!

8. Sesame Donuts – rated as one of the best donut shops in the Portland area

Open from 5 a.m. until 11 p.m. every day, this shop on SW Beaverton Hillsdale Highway bakes a big range of doughnuts in two categories: classic and fancy, as the menu lists them.

That means your craving for a traditional jam-filled treat can be satisfied here, but so can a hankering for something more unusual, like a raspberry fritter with vanilla glaze. Customers appreciate the down-home atmosphere and the not-shy-high prices.

And there are more treats available than doughnuts, including chocolate eclairs and mini bites covered in bits of nuts. The coffee is good too – hot, strong, and flavorful. 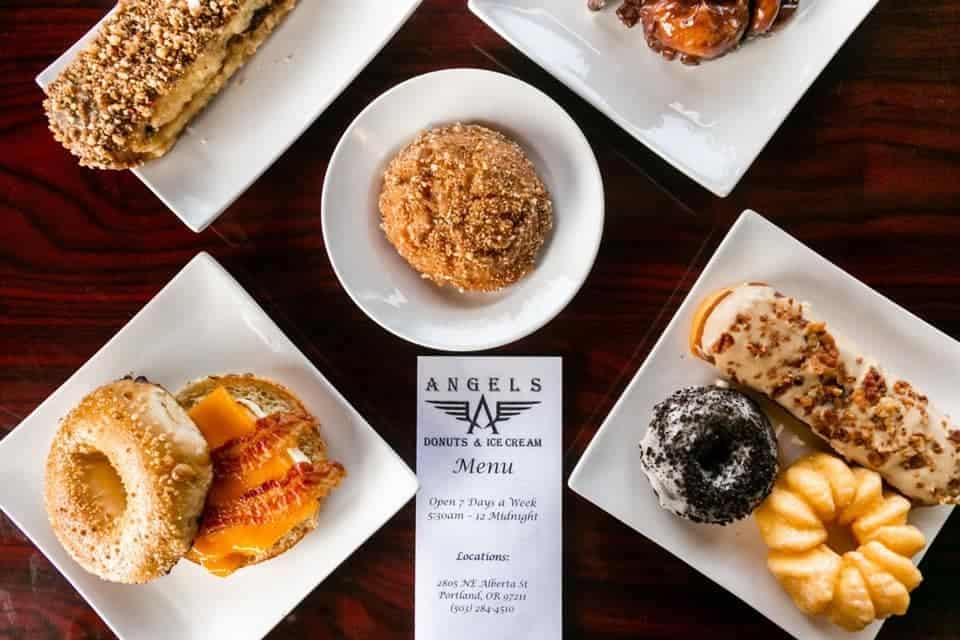 Just like the name says, there’s more on offer at Angel’s than just doughnuts. One online review says the breakfast bagels are the best in Portland, while others rave about the burgers and other savory items.

But the doughnuts get lots of praise too, including the maple glazed, chocolate glazed, and jam-filled ones dusted in icing sugar. Located at NE Alberta Street, Angel’s is open from 6 a.m. until 10 p.m. every day.

10. Delicious Doughnuts – an unpretentious but popular doughnut store in Portland 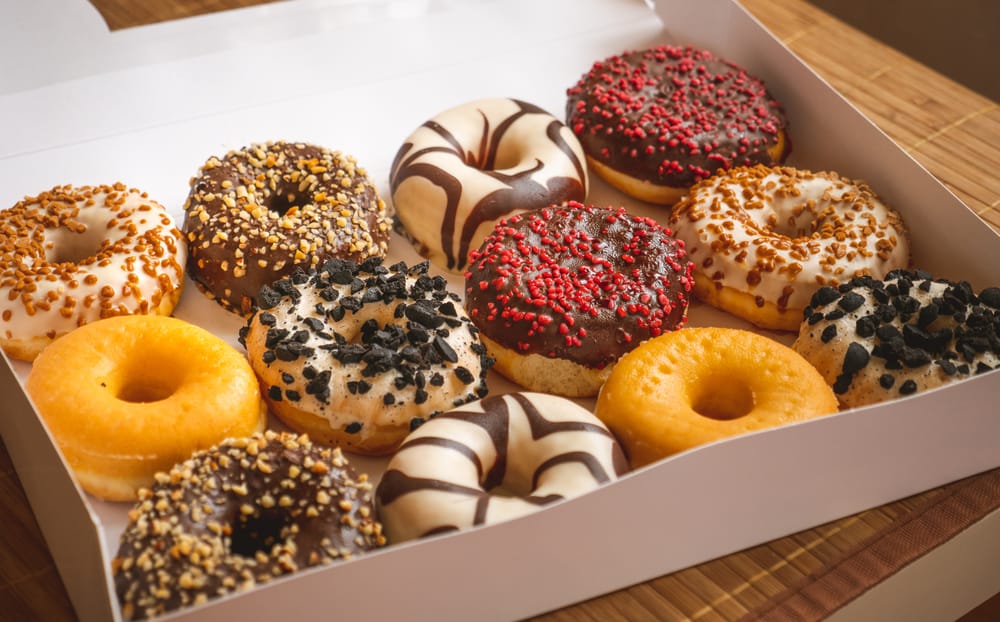 This shop opens at 5 a.m. every weekday but stays closed on the weekend. Located on SE Grand Avenue, customers rave about the variety – not just doughnuts, but also s’mores, bagels and different types of steaming hot coffee and ultra-rich hot chocolate.

The doughnuts come in just about every flavor imaginable, so go hungry and leave with your sweet tooth satisfied for another day. Some of the most delicious donuts to try in the city. 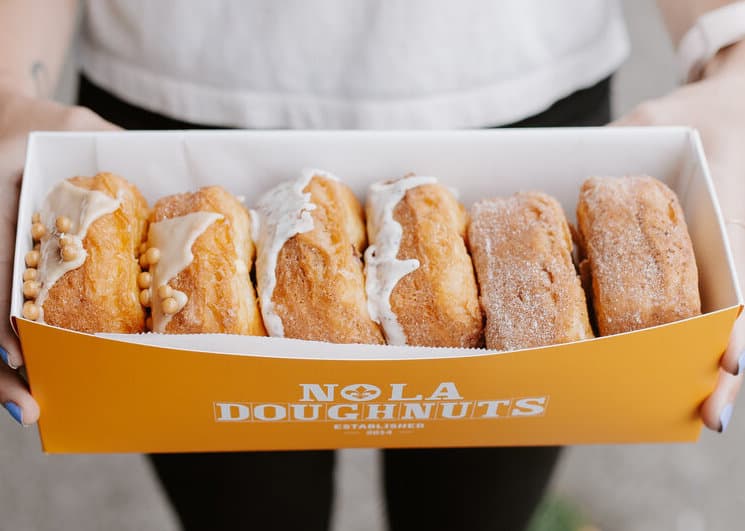 There are two locations serving up New Orleans-style doughnuts, one in Lake Oswego and the other in the Pearl District. The team here does a classic brioche take on doughnuts, and they are famous for their square shape rather than the traditional round that’s so familiar.

Flavors that are big with customers include the lemon poppy seed with raspberry jam, the maple glaze with pastry cream, and a particular standout: the cocoa nig, with cinnamon sugar with chocolate ganache. NOLA doughnuts take three days to prepare, and they’re layered with European butter. 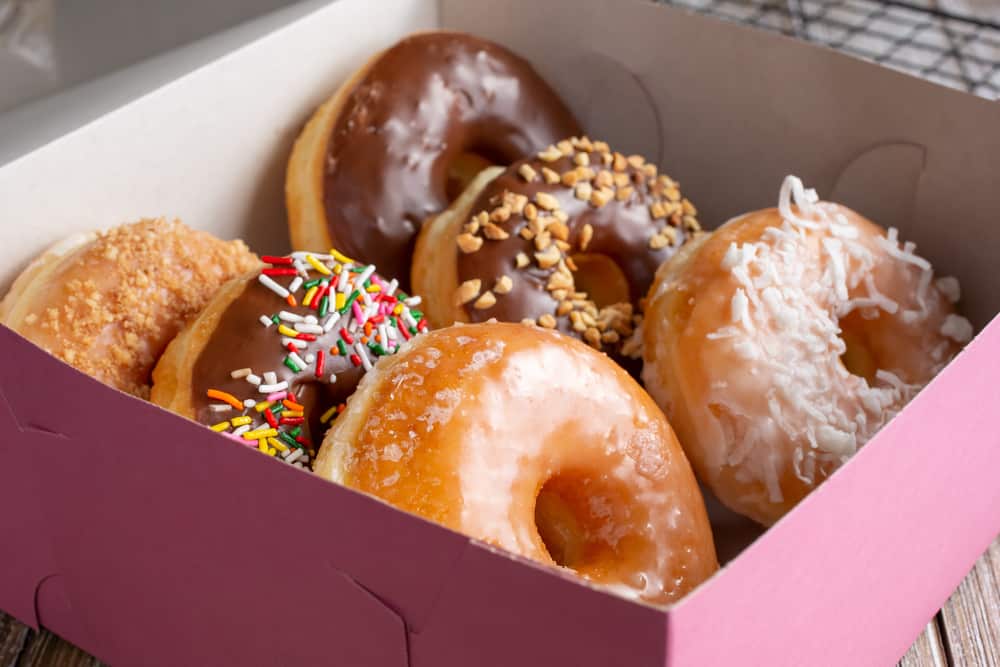 This is a vintage diner in every way – from the doughnut flavors (jelly filling, strawberry glaze, and chocolate sprinkles, to name but a few) to the comfy seating and welcoming atmosphere.

Annie’s is all about doughnuts, and Portland residents love every one of them, including the devil’s food cake doughnut, the apple fritters, and the vanilla iced doughnut.