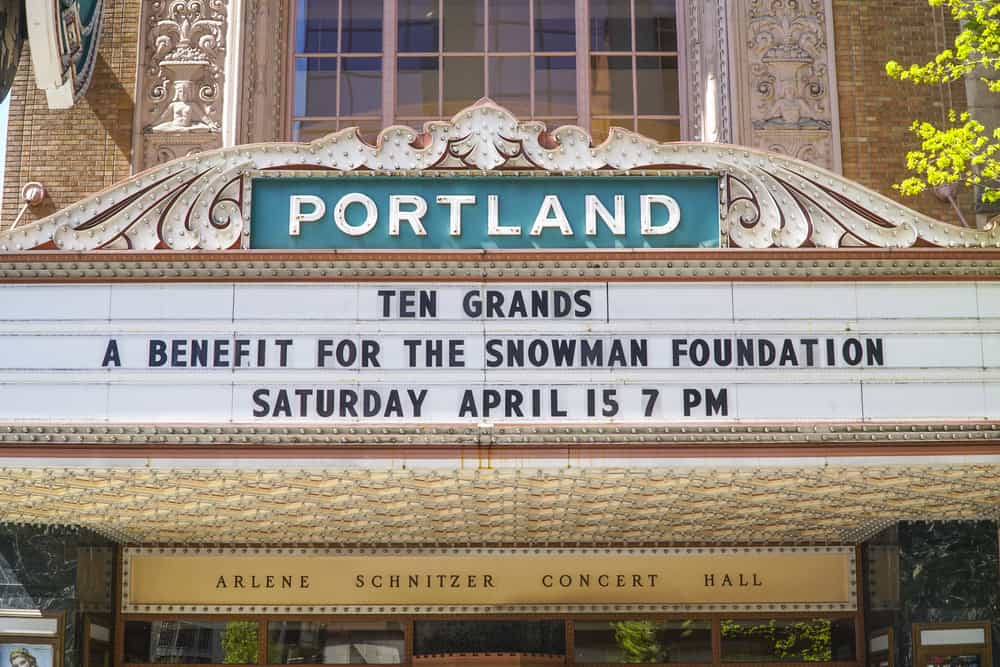 Watching live theatre performances is not only entertaining and offers a great night out but has also been shown to have offer benefits in terms of mental wellbeing as well – bonus! So now you just have to choose where to go. From grand and ornate to small and funky, here are some of the best live theatre venues in Portland, Oregon (in no particular order, they’re all awesome)…

1. Portland Center Stage at The Armory – brings stories to life in unexpected ways

Portland Center Stage is one of Portland’s most important theater venues. The Center Stage is located in The Armory, a historic building in downtown Portland. The independent theater company puts on a range of performances across the venue’s two stages.

Performances include contemporary performances, including the annual JAW: A Playwright’s Festival, which celebrates modern playwrights, as well as old classics such as Hedwig & the Angry Itch. Whether you want to check out a musical favorite or a modern play, Portland Center Stage probably has what you’re looking for at some point during the season.

2. Keller Auditorium – a spacious historic theater which hosts such a wide range of performances

The Keller Auditorium, part of Portland’s Center for the Arts, is one of the city’s largest and most important live theatre venues. The Keller has something for everyone because it hosts a wide variety of performances, including local troupes as well as touring artists. From ballet performances to local staging of Broadway musicals to touring stand-up comedians, the calendar is full of live performing arts to keep anyone entertained.

The schedule at the Keller Auditorium is enough to satisfy anyone, but the experience of visiting the stately, historic auditorium, including plush velvet seats, is worth a trip in and of itself.

3. Hawthorne Theatre – hosts shows for a wide range of genres

The Hawthorne Theatre is an imposing historic Masonic lodge now turned into a welcoming stage for performing arts aficionados of all kinds. Once you get past the colonnaded façade, you’re welcomed into a spacious auditorium staffed by friendly people. You can even get a drink at the lounge.

The Hawthorne Theatre is best known as a music venue because it hosts metal artists, dance music DJs, and more. However, the versatile venue also hosts art shows, dance performances, and a few live theatre events. The smaller lounge is a more intimate space for performances such as spoken word nights, burlesque shows, and more. Check the calendar to get a full appreciation for these eclectic events.

4. McMenamins Mission Theater – an iconic and one of the best known theaters in Portland

This outpost of the McMenamins company, which owns countless beloved venues and restaurants across Portland, is set in a renovated evangelical church (hence the Mission name). The new owners kept the subdued brick façade but installed a bar and stage indoors.

The Mission Theater hosts a variety of events, including movies, live music, and even live performances, that viewers can enjoy from the floor or balcony sitting. The drinks list and food menu are nothing to sneeze at as well. 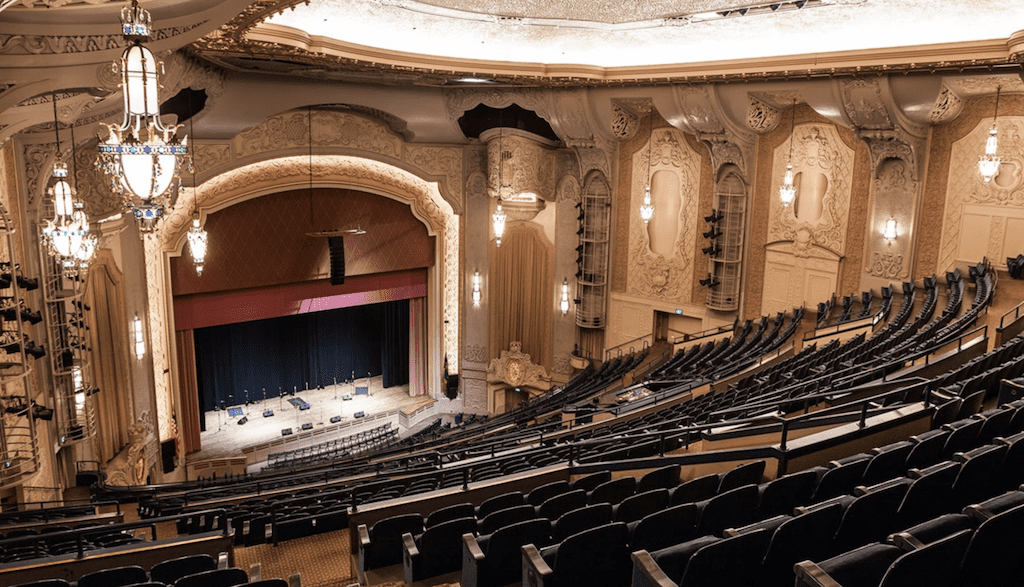 The Arlene Schnitzer Concert Hall is one of Portland’s most stately venues for an elegant night on the town. The historic venue is home to the Oregon Symphony and other classical music ensembles.

Despite its emphasis on live music and classical performances, the Schnitz as it is affectionately known by locals never forgot its theatrical roots (it is one of the only surviving theaters on Portland’s Broadway). Besides live music, the Arlene Schnitzer Concert Hall hosts literary events such as The Moth, ballet performances, and plays.

Revolution Hall is one of Portland’s most unique venues for live performances. The hall, located in the city’s Buckman Neighborhood, is a former high school auditorium. The new owners kept the auditorium layout and the same style seating, but the list of performers is far more sophisticated than a high school band concert.

Revolution Hall primarily hosts live music events featuring local and regional favorites. However, the venue also hosts other types of performances such as live podcasts and radio shows and musicals.

The Alberta Rose Theatre is a historic cinema in Portland’s Concordia neighborhood. Recent renovations helped bring the building to modern standards, but the imposing façade and lively stage are very similar to the theater’s original versions.

The Alberta Rose Theatre no longer hosts exclusive movies. The bulk of the venue’s events consist of live music, ranging from classical to more modern favorites. However, it is also a great place to check out eclectic live performances, including variety shows, cabarets, talks with local writers, and more. The Alberta Rose Theatre is one of the best live theatre venues in Portland to check out the cutting edge of the local performing arts scene.

The Star Theatre is a former silent film cinema in Portland, although the rousing performances hosted there now are anything but silent. The new owner renamed part of the performing space the Starlight Patio & Lounge but kept the vintage façade, even lovingly restoring the old marquee.

The Starlight Patio & Lounge is now host to many lively events. While most are live music performances, you can also catch charity events, drag shows, and queer parties at the theatre. A delicious menu and extensive drinks list make this the perfect low-key venue.

9. Aladdin Theater – a cozy theater in the Brooklyn neighborhood of southeast Portland

Many of Portland’s old movie halls have remained active, although in slightly different form. The Aladdin Theater, a former vaudeville house turned cinema turned live performance venue, is one of them. The historic marquee is still intact, but the interior and list of performances is thoroughly modern.

The Aladdin Theater hosts many events throughout the year, most of which are live music performances. However, it also hosts other types of live performances such as live podcast recordings, stand-up comedy, and more.

10. Imago Theatre – home to some of Portland’s finest and most innovative movement theatre productions

You could call Imago Theatre a live theatre company, but that would not do justice to the expansive nature of what a performance here looks like. The productions here blend music, dance, acting, illusion, and more to create performances that transcend traditional limits around theatre and performing arts. The performances are unlike any other in town, but the absurdity is always infused with a warm sense of humor that takes the audience along for the ride.

Imago Theatre’s company tours nationwide, but there is no better place to catch this innovative performance than in the troupe’s home base. Imago Theatre’s venue also hosts other local troupes that need a performing arts space.

Artists Repertory Theatre is dedicated to modern, thought-provoking theatrical pieces. The venue itself reflects that mission with its glass exterior and modern staging. The intimate venue makes every performance feel immediate and real. You are not just a theater-goer but a participant in the artistic vision presented to you.

ART as the theatre is affectionately nicknamed specializes in avant-garde performances. Besides hosting regional and world premieres from talented playwrights, ART has its own incubator that develops work from marginalized artists. For modern theatre with a social mission, you can’t go wrong with a visit to Artists Repository Theatre.

The Profile Theatre highlights contemporary works in its repertoire which are often ignored by larger companies in favor of guaranteed older crowd-pleasers. It helps keep contemporary theatre alive and breathing.

If you’re looking for a place to take the youngest members of our family, then the Oregon Children’s Theatre is your best bet. This intimate venue exclusively hosts family-friendly shows designed to interest children. From improv shows to adaptations of children’s book classics such as The Very Hungry Caterpillar to age-appropriate versions of classic Shakespeare plays, Oregon Children’s Theatre has something for kids of all ages and interests.

Besides performances, the Oregon Children’s Theatre is dedicated to bringing the performing arts closer to local kids. The acting academy and mentorship program for teenagers serious about the performing arts sets young people up for a future in the theatre—or just equips them with confidence and teambuilding skills. Now that’s a mission worth supporting.