If you’re a fan of hanging out somewhere a little bit different, handily Portland has plenty of places to choose from. Whether you’re a fan of fun tiki bars with tropical slushies or quirky horror-themed bars with die-hard liquors, there’s something in the city for everyone. From hip and trendy to very unique, here are the best cool and unusual bars in Portland, Oregon (in no particular order)…

Raven’s Manor is a supernatural-themed cocktail bar situated in the Old Town District.

View their signature cocktails with classifications such as the Deadly Tonics which have the spirits at the forefront of the cocktail and the Eerie Elixirs which refresh you with more sweetness.

Some Deadly Tonics include Hellfire, the Exorcist, the Mad Scientist, and Lingering Shadow. Examples of Eerie Elixirs are Dr. Raven’s Reserve, the Pumpkin King, Ectoplasm, and Uranium Fizz.

Buckman District’s Hey Love is a bar located in the Jupiter NEXT Hotel.

What makes this one of the cool and unusual bars in Portland is that the setting is surrounded by plants, which makes for a natural feel while you dine on cocktails and small plates.

3. Teardrop Lounge – a funky and hip cocktail bar located in the heart of Portland’s Pearl District

Next time you are in the Pearl District, stop by the Teardrop Lounge for a unique bar experience because of the talented mixologists on-premises.

Late Check-out, Lima Spirit, Skyrocket, Bamboo Cocktail, Windowsill, and others are amongst the signature cocktails at the Cocktail Lounge.

When you visit their website, they have a dish featured on their homepage. On one Wednesday, they featured sliders on the homepage.

Paloma, Poisoned Prawn, The Economist, Pocket Watch, and Bad Santa are some of the examples of the signature cocktails featured at the Pink Rabbit.

Besides sliders, they also serve Kimchi Fried Rice, Pad Thai, Sauteed Mushrooms, Wonton Nachos, and more small plates for you to choose from.

5. Hale Pele – an upbeat tiki bar that has a vibrant atmosphere and creative cocktails

Hale Pele is a tiki bar within the Grant Park District that specializes in rum-based cocktails, upscale cocktail syrups, and tiki-themed foods.

There is a wide variety of exotic cocktails for you to indulge in to make you feel like you are in Hawaii. Try the Mai Tai with Trader Vic’s, Oakland, 1944, or the Zombie’s Punch with Don’s Beachcomber, Los Angeles, 1934.

Ground Kontrol Classic Arcade and Bar is a cool and unusual bar and arcade stationed in the Old Town District.

It’s a futuristic-themed establishment that features old-school games and pinball. Indulge in beer and small plates while enjoying some rounds of pinball.

Nachos and queso, chili bowl, hot dogs such as sauerkraut dogs, grilled cheese, and BLTs are some of the bites at Ground Kontrol.

7. Bye and Bye – a relaxed but hip dimly lit bar where you can enjoy vegan food and a spacious patio

Bye and Bye is a hippy bar serving Southern vegan dishes until late at night in its King District location.

Pretzel knots, BBQ Brussels Bowl, Peanut Broccoli Bowl, Spaghetti, Weeping Tiger Sandwich, and vegan Chipotle Mac and Cheese (made with cashew cheese) are amongst the many entrees on Bye and Bye’s food menu.

8. Creepy’s – a quirky and unique bar where you can appreciate clown dolls and oddities

Creepy’s is one of the very cool and unusual bars in Portland with clown dolls and other eclectic collectables behind the bar.

Located in the Buckman District, their Happy Hour is every day from 3 pm to 6 pm featuring $5 food and drinks. Rather than display a menu of food and drinks on their homepage, you must petition for a quote online or call them for one.

This makes the business connection more personal, even if the name of the bar is Creepy’s.

9. The Alibi Tiki Lounge – a trendy karaoke bar that offers island-themed murals and a warm environment

The Alibi Tiki Lounge is a karaoke bar situated in the Overlook District. Enjoy the tiki-themed murals and tropical cocktails while you sing your heart out.

Potstickers, Alibi Wings, Coconut Shrimp, Alibi Nachos, Weekender Burger, and Kalua Pork are amongst what you can eat in the Alibi Tiki Lounge.

Sip on a cocktail in between staying for karaoke after dinner which starts at 9 pm. Rain Killer, Mai Tai, Hurricane, and Shark Attack are among some of the tropical cocktails.

10. Bible Club – one of the most eccentric bars in Portland that features an antique setting

Bible Club will transfer you back to the 1920s speakeasy with antiques behind the bar, classic cocktails, and their small plates at its Sellwood-Moreland District location.

Try one of their libations separated into classifications of The Old Testament and the New Testament to fit the Bible-themed name.

11. Dig A Pony – a trendy, hip and unique barroom based in a restored pharmacy

Southeast Portland’s Dig A Pony is known as “A Home for Many” where people can unwind and enjoy delicious food and quality cocktails.

Ruby Bishop, 96 Tears, Adore Me, and Way We Were are names of some of the signature Dig A Pony cocktails.

Many of their happy hours feature a DJ or live music entertainment. For food, choose from the Chicken Parmesan Hero, Italian Sausage Smash, Burger, and Eggplant Parmigiana Hero amongst other entrees.

12. Paydirt – a fine and dandy bar that serves craft beers and a great range of rare aperitifs

Paydirt is an exclusive bar serving only drinks hence why they are known as a dedicated drinking establishment.

The Multnomah Whiskey Library is an upscale and unusual bar in Downtown Portland in that you must pay a membership to gain access to the establishment. There are over 1,500 spirits for you to try for endless possibilities in varying your experience every time you visit. If you are not a  member, you can pay for a hall pass to see what all the craze is about.

If you prefer to gain free entry, try the Green Room below the library so that you do not have to worry about paying for a membership or a hall pass.

14. Two Wrongs Portland – a seriously fun spot that has one of the most delicious drinks in town

The Pearl District’s Two Wrongs bar is unusual in how it operates. Cupcakes and cocktails are acceptable. You may go to the bar alone but come out with new friends because of its social atmosphere. Anything can happen at Two Wrongs.

The margarita on draft is considered for “parrot heads only”. If you have a large party with you, you can grab a margarita pitcher. Try the wine, beer, or even rotating cocktail slushies.

Their food menu specializes in serving tacos while they also serve nachos, burritos, and quesadillas.

They are a socially conscious bar helping a fundraiser for a friend of Psychic Bar named Jules who is undergoing chemotherapy. $5 from all cocktails sold goes to this fundraiser. Indulge in other beers, wines, and spirits if you are not up for cocktails when you go.

One of their signature slushies is the Scooby Snack slushy with tropical mystery splashed with banana, melon, and coconut. It’s $1 less during movie nights.

The White Owl Social Club in the Buckman District features local beers, vegan dishes, and live music on their patio. If you go on their patio, you can enjoy the fire pit burning while you are eating.

They are known for their strong alcoholic beverages such as their Buckman Sour (Buffalo Trace), The Deuce (Aged Rum), and the Chicharita (Pueblo tequila).

Specializing in tacos with its taco menu and other small plates such as esquites and chips and salsa, the food complements the drinks rather than the other way around.

17. The Coffin Club – a horror-themed club that features a dark goth bar perfect for emos

The Coffin Club was previously known as the Lovecraft Bar.

Located in the Buckman District, you can expect dance nights, concerts, and other special events related to music when you visit the Coffin Club. What’s even more cool and unusual is that their logo is a skeleton drinking a beer hence their bar name.

Dragons and other Gothic and grotesque photos decorate the walls at the Coffin Club to fit its horror-themed backstory.

It’s been voted as one of Portland’s top 10 best dance nights for LGBTQ parties and best for featuring a variety of 80s, 90s, goth, post-punk, dark electro, and other darker music themes.

18. Vintage Cocktail Lounge – a classic lounge that provides a relaxing outside area 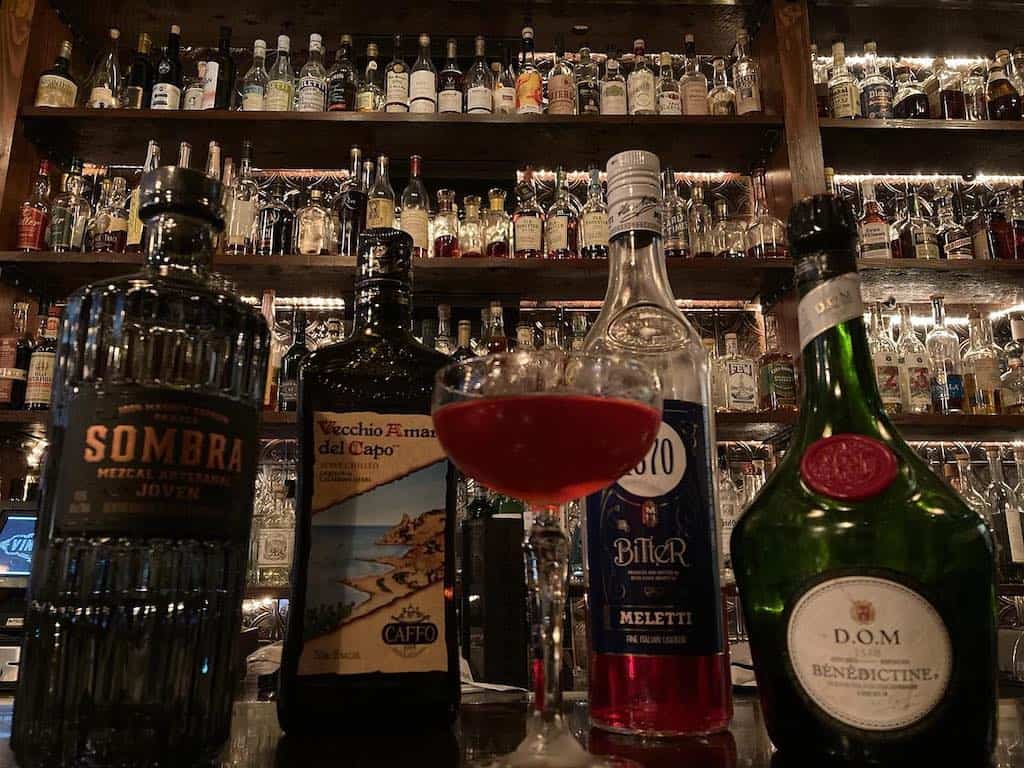 Vintage Cocktail Lounge in the Montavilla District hits with one of the best lineups of classic cocktails while also having contemporary selections for those that want to try something new.

Out of all their available drinks, their longest list is whiskey which means they specialize in selling this alcoholic beverage. Rabbit Habbits, Summer of Swayze, Foggy Bottom, Country Club, and Foggy Bottom are some examples of whiskey cocktails.

Happy Hour is daily from 4 pm to 6 pm with cocktails like Lavender Cocktail (Gordon’s vodka) and Not for Nothin (George Dickel rye). All cocktails are $6 during these hours and wines and beers are $5 each.

19. The Big Legrowlski – one of the best music venues in Portland where you will find talented local artists

Craft beers on tap and take-home growlers are the specialties at The Big Legrowlski located in the Pearl District.

Enjoy live music, open jams, DJs, and other special live performances when you visit. If you are a local band, you can book a gig on their website.

While they do not have their drink or food menu on their website, make it a surprise and go in there to figure out their menu when you visit.

20. Bar of the Gods – a Greek temple theme bar that has been acclaimed as one of the top 10 bars in the USA

Sunnyside District’s Bar of the Gods encompasses a theme of a Greek temple hence its name. Enjoy not only alcoholic beverages but also pinball and pool tables. You can even dine on their covered patio.

Happy Hour takes place from 3 pm to 6 pm every day with $1 off bar appetizers and draft microbrews. The Bog Moscow Mule, Bog Irish Mule, and Cucumber Gin Mule are just a few of the signature cocktails on their menu.