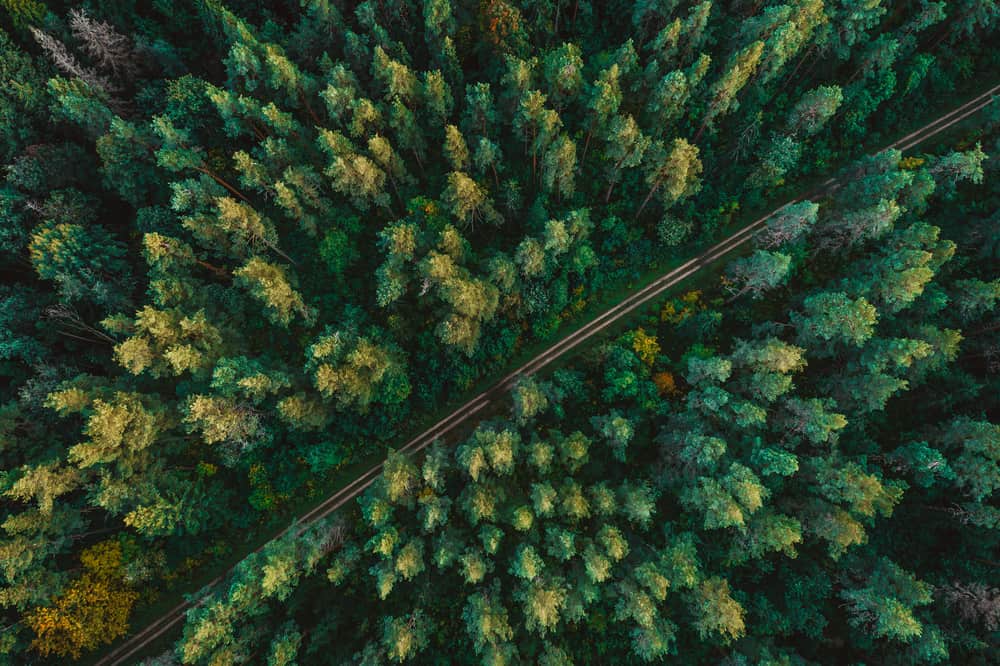 The city of Portland, Oregon, is a great travel hub to many other cities across the United States. It’s the 25th most populous city in the U.S and has lots of different travel options as a result.

With Portland being the biggest city in Oregon, it is the center of travel through the Pacific Northwest. Most trains and buses operate from Union Station, which is located downtown and near to Portland International Airport. 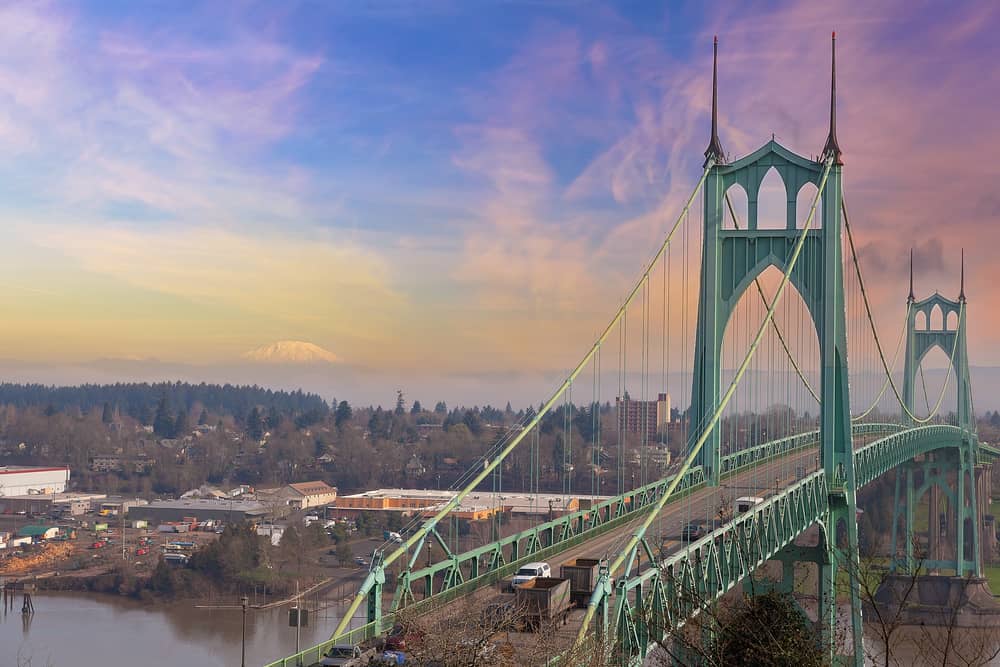 Union Station in Portland serves many Amtrak train and Greyhound bus routes. There is also an intercity bus service, Portland Streetcar connections, MAX Light Rail connections, as well as local TriMet bus connections. The station has a bar and restaurant as well as a business-class and first-class passenger lounge. 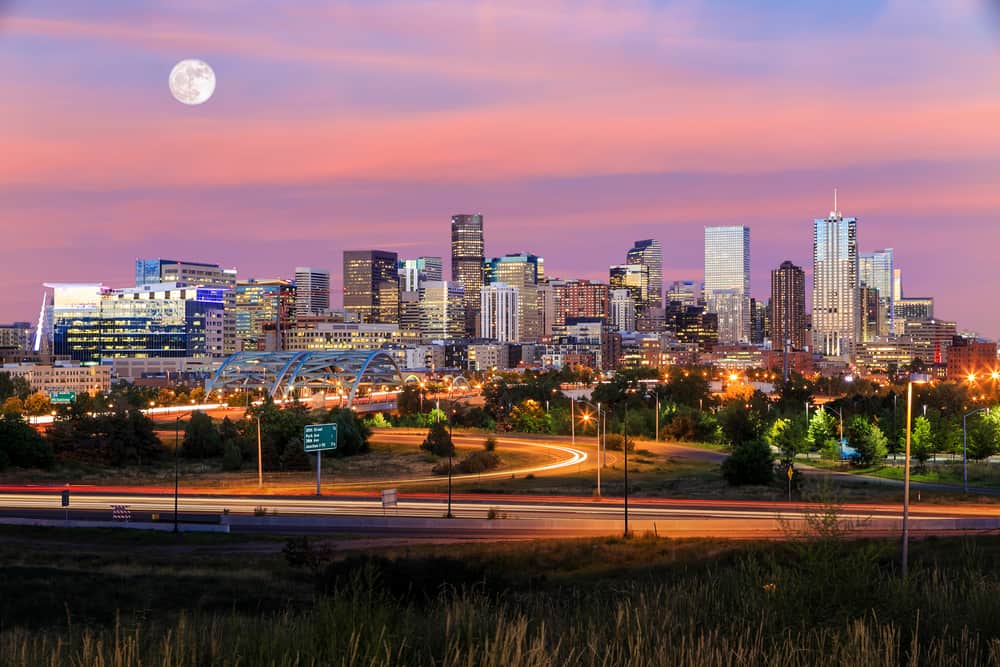 Denver is also a busy hub for travel as it is the biggest Mountain States city. The airport in Denver is on the outskirts, but it is still accessible quite easily. Buses and trains arrive in downtown Denver at Union Station. This is an old station that dates from 1881. It is a popular place even for those not traveling as it is home to some of the best bars, restaurants, and shops in Denver. The station even has a seasonal farmers’ market. In terms of transport, there are Greyhound intercity buses, Amtrak trains, Jefferson Lines, Express Arrow, and Burlington Trailways. Denver International Airport is accessed via the commuter rail A-Line.

Traveling from Portland to Denver

If you’re heading from Portland to Denver, there are many different ways to approach your journey. So let’s take a look.

By Air – Portland to Denver 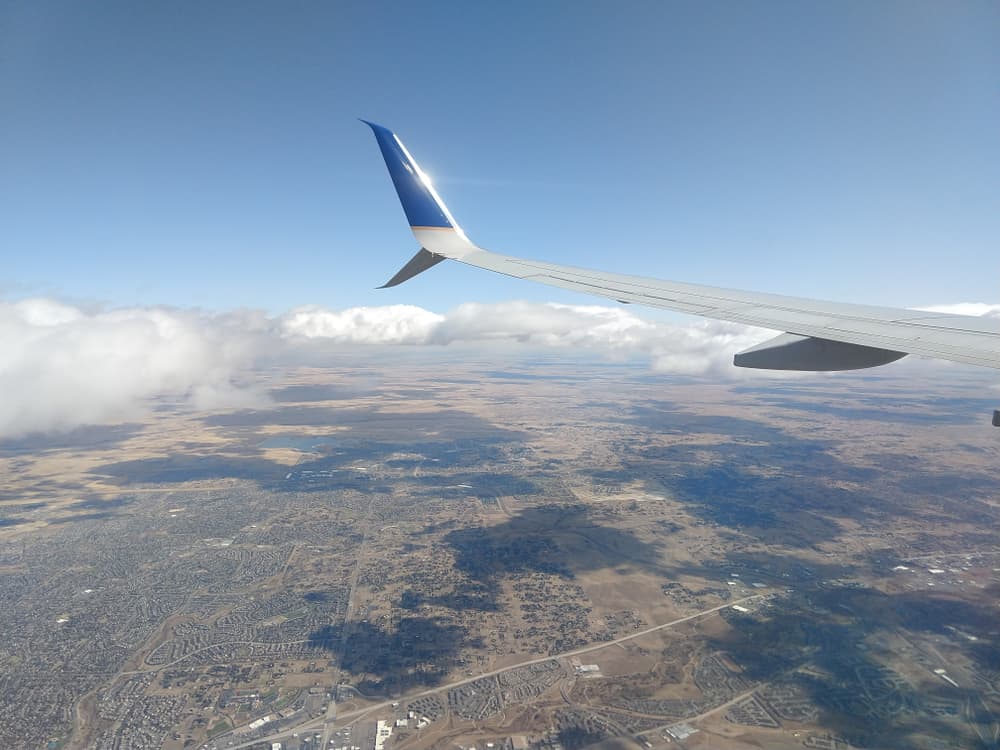 The most obvious and quickest way to get from Portland to Denver is by plane. Firstly, you’ll need to head to Portland Airport (PDX). You can get there by the Red Line tram, which runs every 15 to 20 minutes from Old Town/Chinatown Station. The journey is around 11 miles and takes just over 30 minutes, and costs between $2 and $3. The Airport tram stop is called Portland Int’l Airport Station, and so you can’t go wrong!

There are many possible flight options between Portland (PDX) and Denver (DEN), with the flight time being approximately 2h30m.

There are direct flights daily through Alaska Airlines, Frontier Airlines, United Airlines, and Southwest Airlines. Delta Airlines also has a daily flight with one change in Salt Lake City. The total flight time for this option is around 4h20 minutes.

According to Rome2rio.com, the flights range in price from $61 to $233 for a one-way flight.

Once in Denver Airport, you’re about 23 miles and a 37-minute train journey to the center (Union Station). The trains run every 20 minutes and cost in the region of $3 to $11.

By Air – Portland to Eugene to Denver

If the direct route isn’t suitable or you’d just like to combine two journey types, there are other flight options. For example, you can travel via train from Portland to Eugene and then fly on to Denver from there.

The train will take you from Denver Airport Station into the center in around 37 minutes for $3 to $11.

By Bus – Portland to Denver

Greyhound runs a bus service between Portland and Denver. The journey is just over 31h, departing each day at 10 am and arriving the following day at 18:10. The route has 20 stops between Portland and Denver. It first heads east, running across the north of Oregon before traveling southwest into Idaho around Ontario. Next, it follows Route 86 before heading off to Tremonton after Burley, crossing briefly into Utah for Salt Lake City, then up through the south of Wyoming before heading south into Colorado for Denver.

The price is between $130 and $180 for an economy seat. You can book tickets online at www.greyhound.com, or you can buy tickets at the station.

Generally speaking, people who choose to get the bus do so for financial reasons, so here’s how to get the best deals for Greyhound coaches.

Tips for long journeys on a bus

Being on a coach for 31 hours is not easy, so bring things to make your journey more pleasant. Having snacks, a scarf or blanket, and headphones for your device might help the journey pass more quickly. While the bus will make stops, there might be a limit to the types of food you can access on the stops, and it’s likely to be fast food. If you’re unable to sleep, your seat will have an overhead light so that you can read. 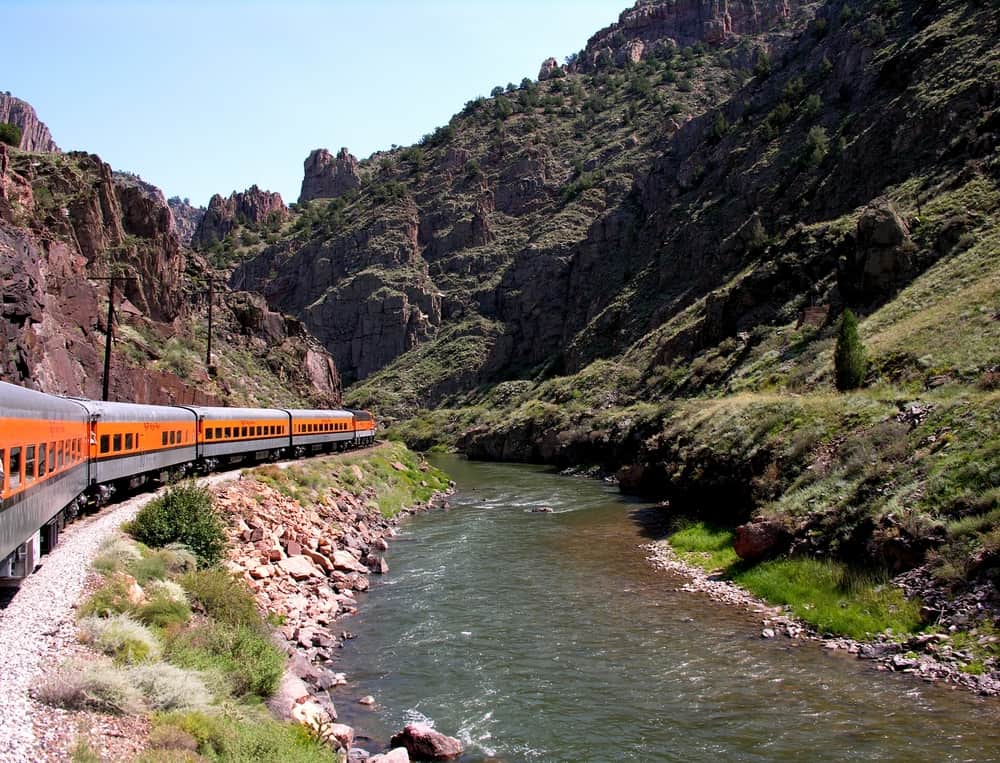 If you don’t want to fly and don’t like the idea of traveling by coach, the train is another option.

There are no direct trains between Portland and Denver, but if you don’t mind changing at Sacramento, there’s only one transfer.

Between Portland and Sacramento is an overnight train. It leaves daily at 14:25, arriving in Sacramento at 06:15 the next morning. In Sacramento, there’s a stopover of almost 5 hours before the final leg of the journey.

The train to Denver departs Sacramento at 11:09 and has 20 stops before it reaches Denver. The journey takes 30h30m and arrives in Denver the following day at 18:38.

You can expect to pay between $200 and $280 for a single journey from Portland to Denver on the train.

Tips for traveling by train

Most of the Amtrak trains have onboard Wi-Fi, so you can work, browse the internet or stream music on your journey. However, in case the bandwidth is poor, or you have a train without Wi-Fi, it’s worth having something downloaded to your mobile device before your trip so that you have entertainment for your journey.

Trains between Portland and Denver tend to be the busiest on Thursdays and the least crowded on Sundays. The most expensive tickets are also on Thursdays too.

As the train isn’t a direct train, you’ll need to disembark. You can check-in baggage for some trains, so it’s worth checking whether you are responsible for transferring this during your connection. 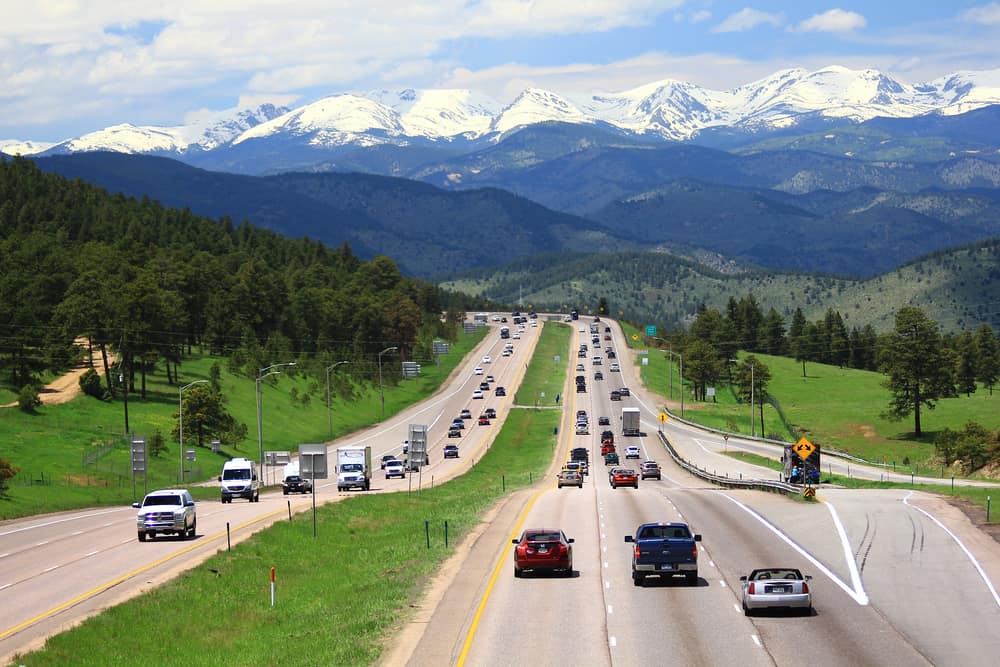 For anyone who enjoys long road trips, there is always the option of driving from Portland to Denver. Without taking into account any stops, this journey would take 19 hours as it is over 1200 miles. With stops, you’re looking at two days’ driving. You’d need to budget for fuel costs (anything up to $200) as well as tolls. If you need to rent a car, this would also add to your cost. 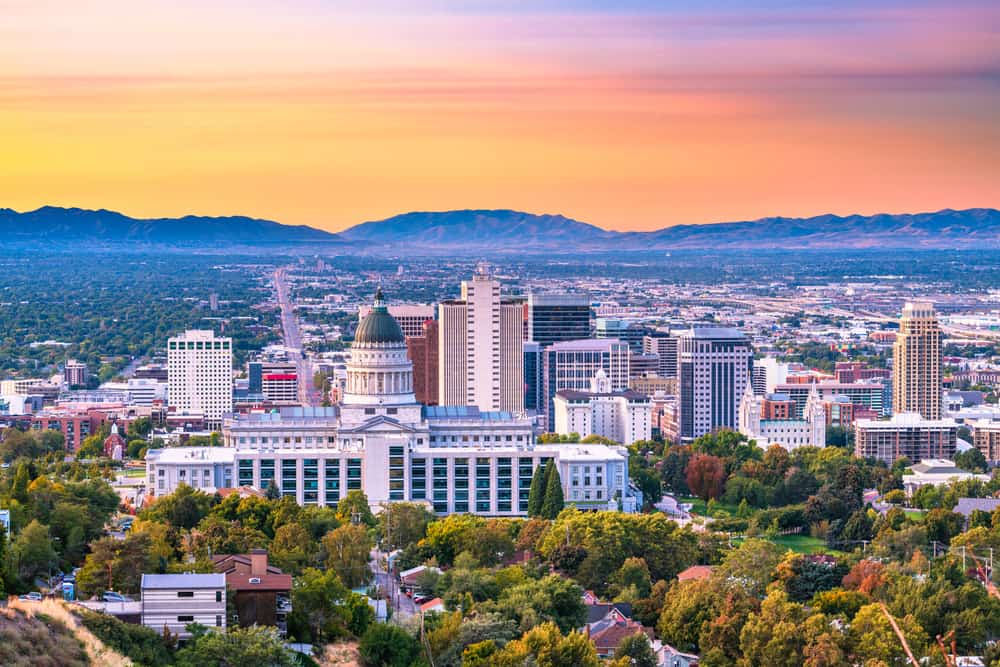 If you’re going to do the journey over two days, your halfway point would be somewhere before Salt Lake City. You could do a slightly longer first day, stopping over at Salt Lake City, and then a shorter second day to end in Denver.

For a three-day trip, you could stop over around Boise or Nampa and then Salt Lake City for your second night.

If you really want to take your time, your route will take you past some amazing places, including Lewis and Clark National Historical Park, Fort Stevens State Park and Red Rocks Park and Amphitheater. There’s a huge amount of fun opportunities to be had, and there are excellent campgrounds on the way.

Surprisingly, the cheapest option is to fly directly from Portland to Denver, though it depends on when you fly and when you book your ticket. At just under 5 hours, it’s also the quickest option. The second cheapest option is the bus, but you’re traveling for over 31 hours with this.

When you’re deciding how to get to Denver from Portland, you really need to weigh up your priorities. If you’re in a hurry, flying is the best bet. But, for those who like to take in the scenery or like to vary how they travel, taking public transport or driving can make for a really memorable trip.