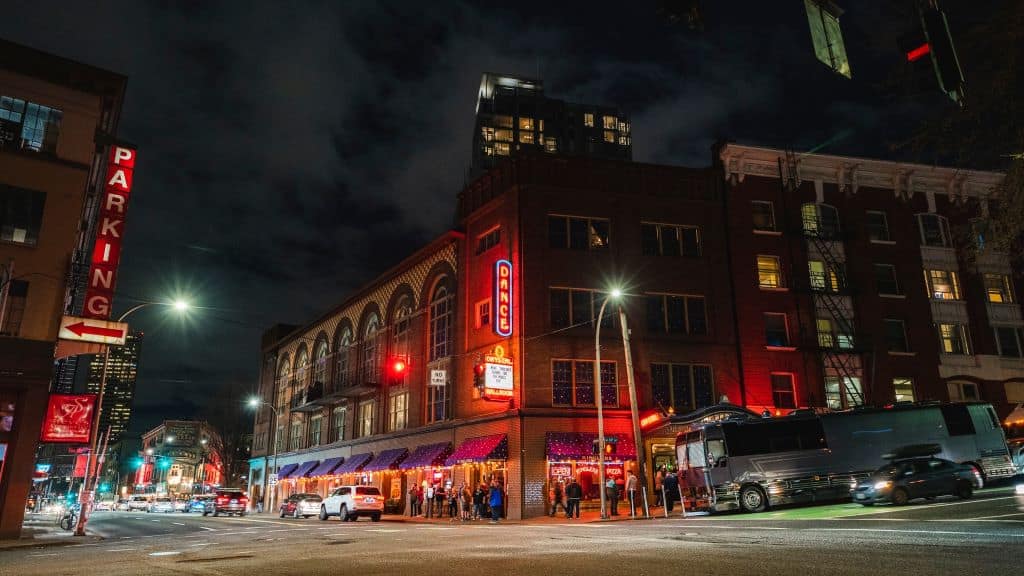 As well as being known for its eco-friendliness, microbreweries, hipster culture and its coffeehouses, the city of Portland is also home to a number of architectural landmarks.

The city originated in 1851 and it’s been the place to try out an impressive range of architectural styles over the years. From formal historic significant structures to modern skyscrapers, here are the most impressive and iconic buildings in Portland, Oregon…

1. Pioneer Courthouse – the oldest federal courthouse in the Pacific Northwest 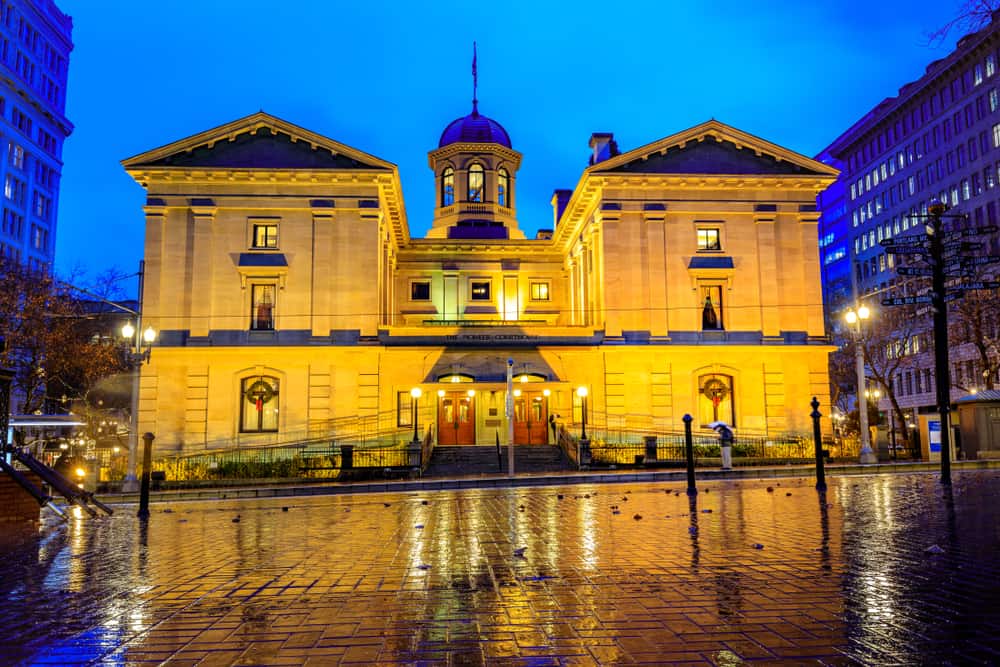 The Pioneer Courthouse which was first built in 1869 is one of the oldest federal buildings still in function. The US Court of Appeals for the Ninth Circuit holds hearings in the building and the structure continues to thrive in the new generation.

The courthouse also had a post office situated inside back in 2005, due to which it got the popular nickname “Pioneer Post Office”.The area around the courthouse is called “Pioneer Courthouse Square” which serves as the central foundation for downtown Portland.

The Pioneer Courthouse is built on an Italianate structure and was added to the National Register of Historic Places as early as the 1970s and within a few years, it was deemed a National Historic Landmark further increasing its significance. 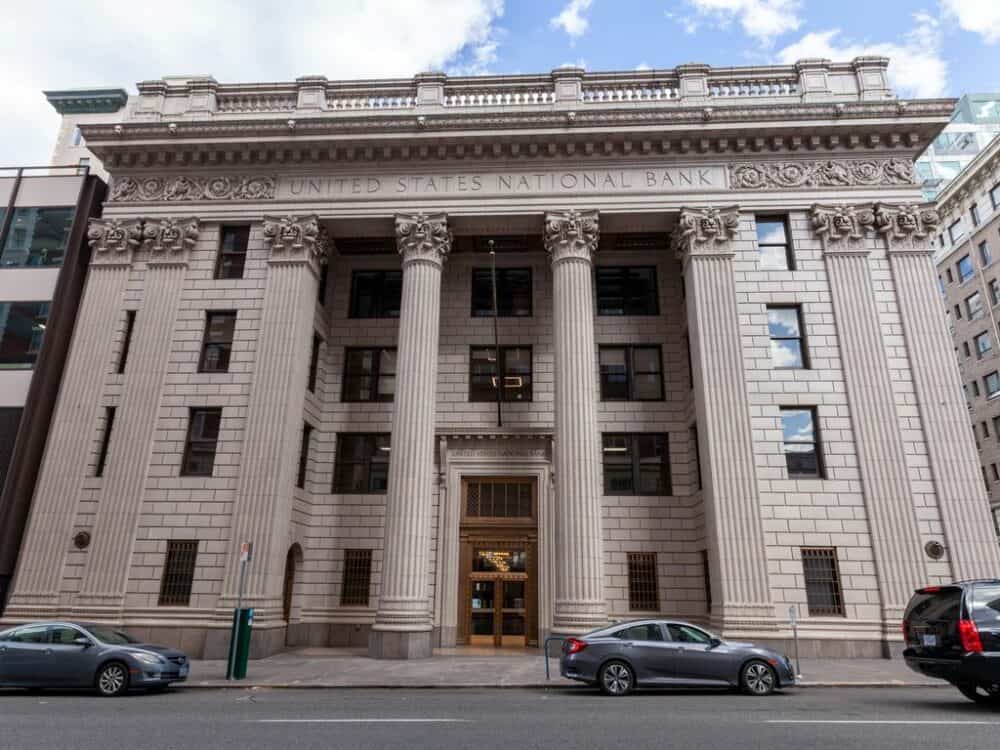 The U.S. National Bank Building is a significant historic landmark in downtown Portland. The building was designed in a Classical Roman architectural style by A.E. Doyle back in the 1900s when the style was popular.

The building has since then been expanded to four stories and is currently considered an American Renaissance landmark. The National Bank Building due to its unique style, busy neighborhood, and cultural significance has enjoyed popularity throughout the generations.

The building is currently in use by the U.S. Bancorp which is one of the most popular US banks. 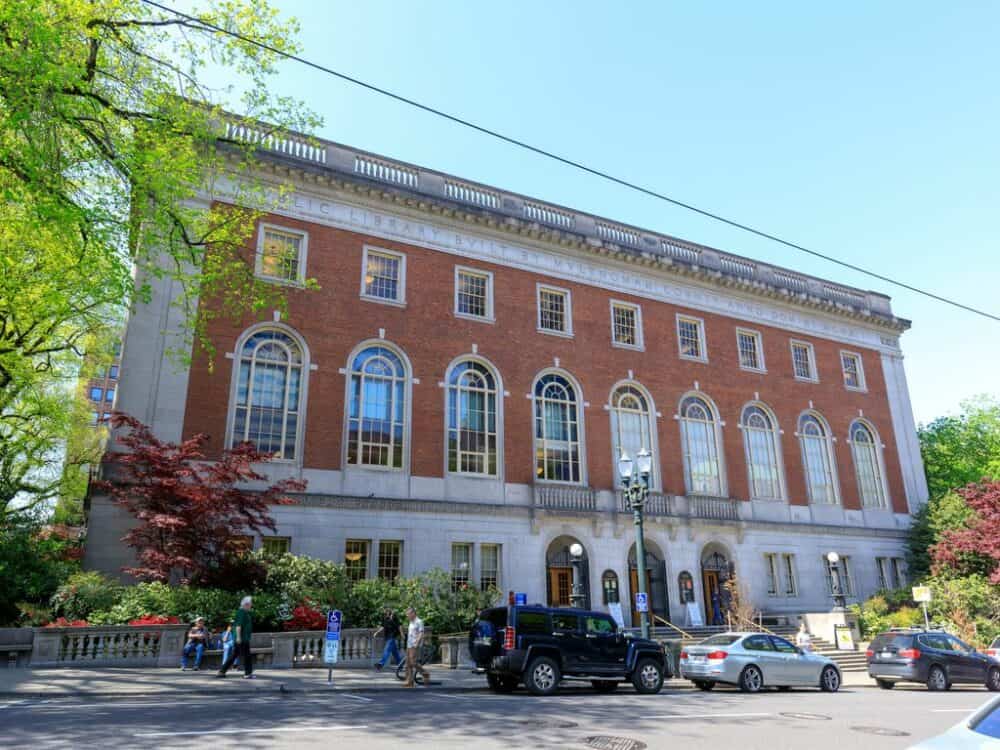 The Central Library was designed in the early 1900s by A.E. Doyle who is also responsible for the design of the National Bank Building.

At the time the Library Association of Portland was searching for locations for their library and ultimately decided to go for downtown Portland as their main branch.

The Central Library has gone through numerous renovations and changes since then. Particularly in the 1990s, when the ownership of the building was transferred to Multnomah County, the library was heavily renovated with the roof being rebuilt and interior remodeled.

The library is built in a Georgian style and is currently the main branch of the Multnomah County library system. 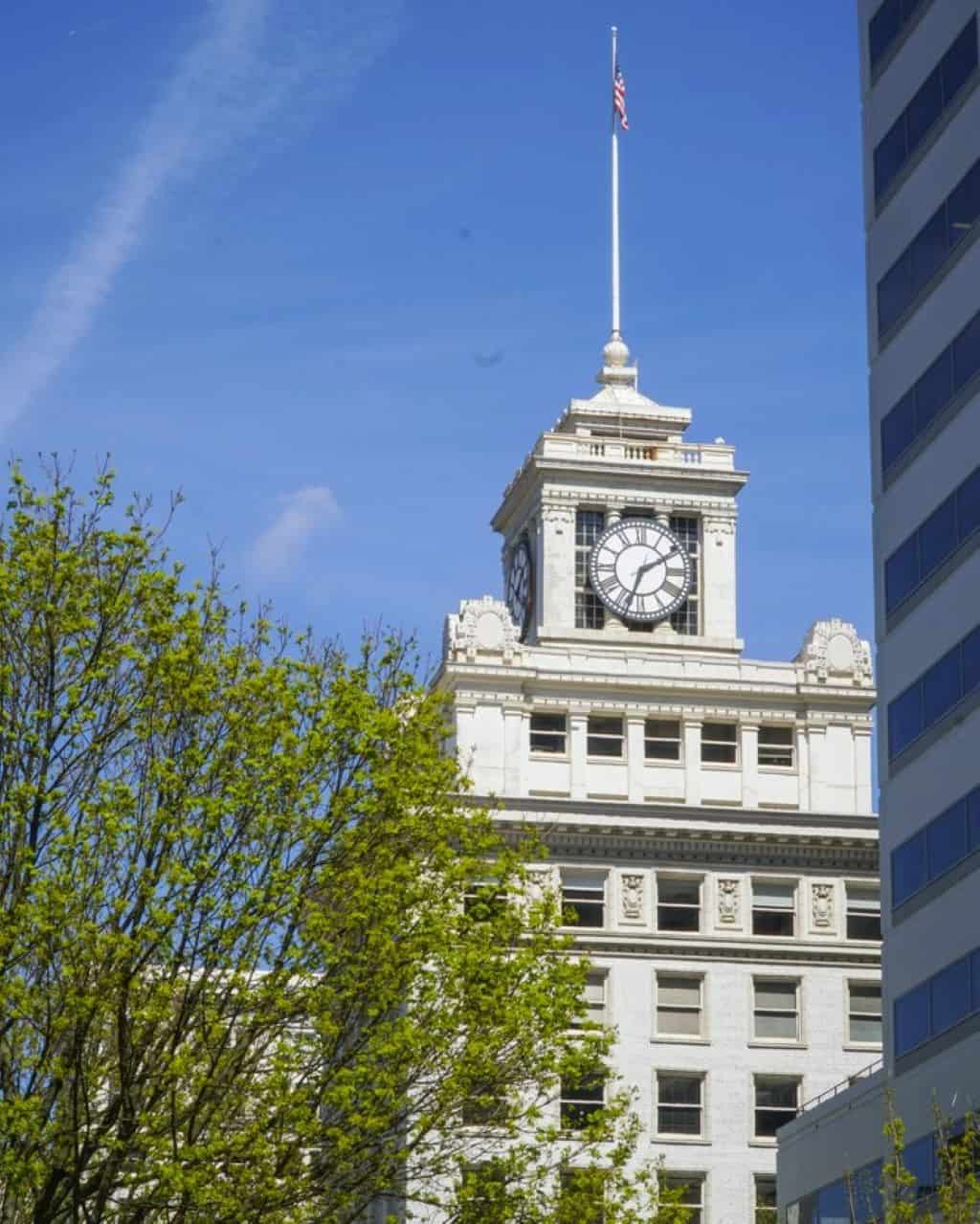 The company was later dissolved and the tower has been leased and owned by many parties since then.

The landmark is built in a New-Arts style and stands around 57 meters tall. Perhaps its most distinguishing feature is its clock, which represents the significance of clock towers for newspaper companies in the 1900s.

Due to its unique position, being adjacent to the Pioneer Courthouse Square and cornering Broadway and Yamhill streets, the clock tower enjoys huge public attention and is considered a historic landmark.

5. Bishop’s House – a historic gothic building based in the heart of Portland’s downtown 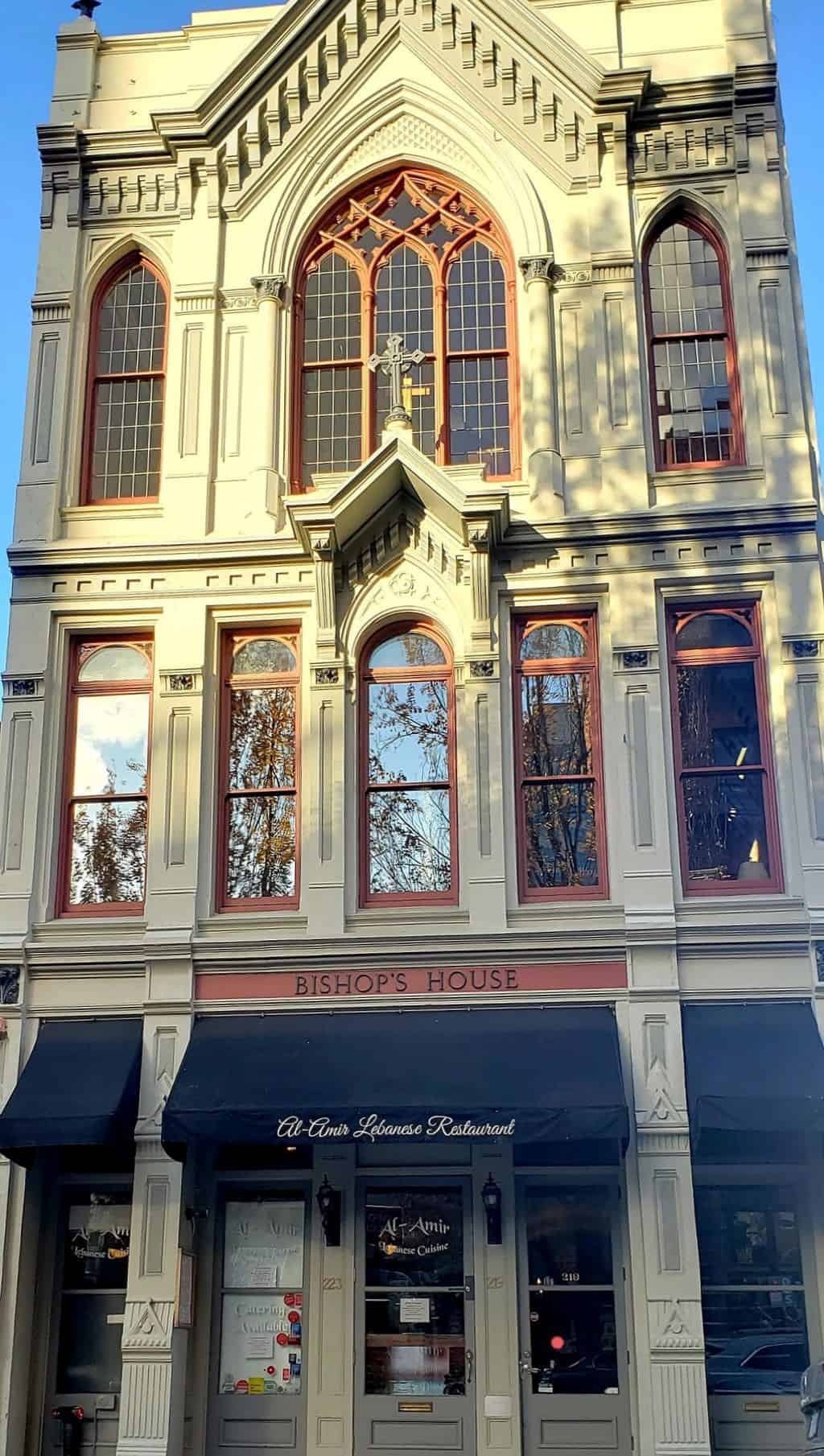 The historic Bishop’s House in Portland, Oregon was the official residence of the archbishop William Heckley back in 1879. The house is said to be based on a Gothic Revival architecture style.

In 2001, it was occupied by offices and used as home to both a Lebanese restaurant plus a startup company “Bishop house LLC”. The Bishop’s house was added to the National Register of Historic Places in 1974.

6. U.S. Bancorp – a stunning modern skyscraper that has been presented the Leadership in Energy and Environmental Design Platinum (LEED) certification for environmental sustainability 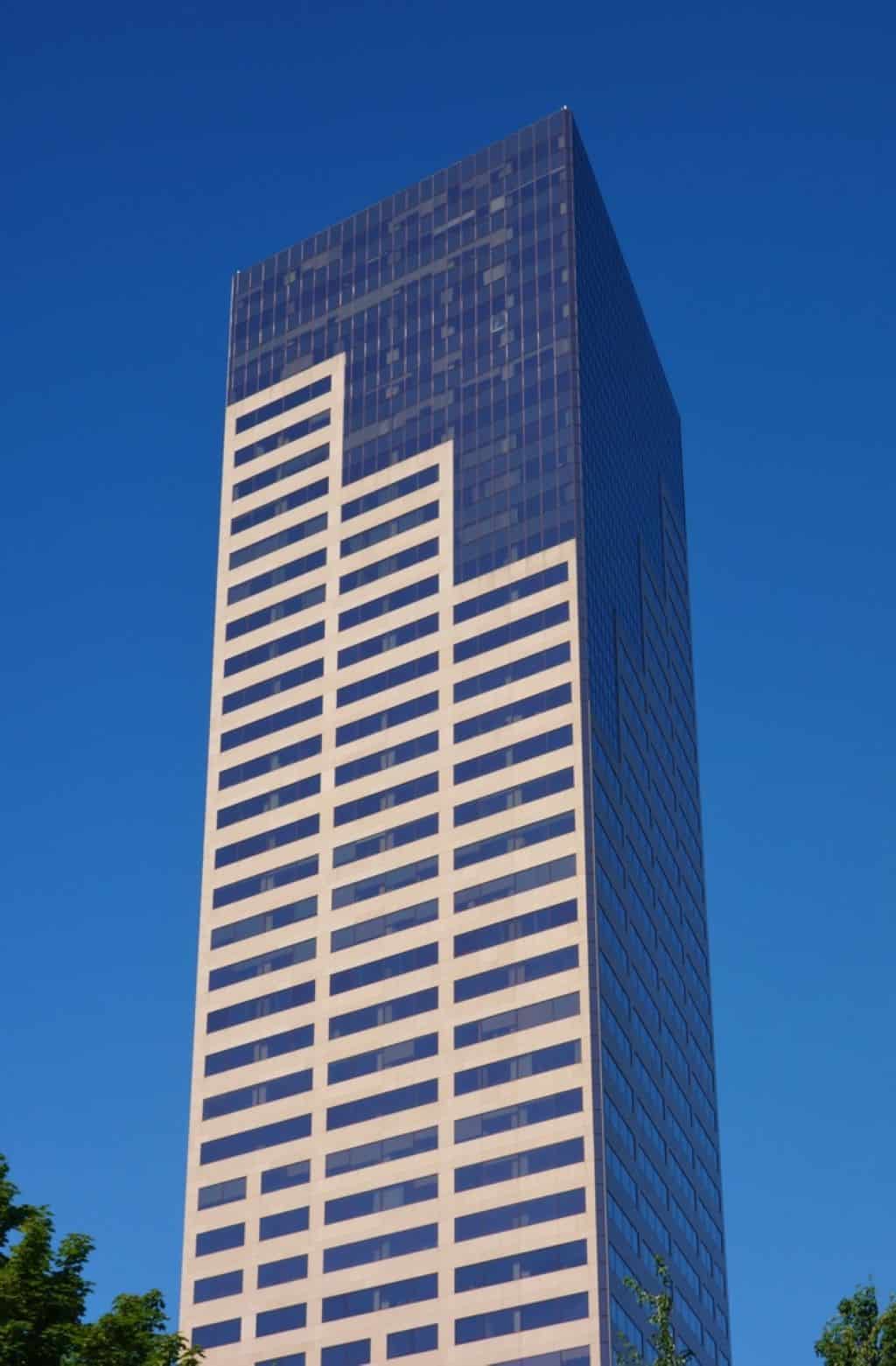 The U.S. Bancorp featuring an environmentally friendly and modern design was constructed back in 1981 and has been renovated several times since then. The stunning 163 m skyscraper has been awarded the Energy and Environmental Design Platinum certification by the Green Building Council due to its emphasis on an eco-friendly design.

The original capital investment in the construction of the building was $60 million and a further $4 million has been spent since then renovating the building.

The tower was originally built for the U.S. Bancorp banking organization by the Skidmore, Owings & Merrill company in collaboration with the architect Pietro Belluschi.

However, over the years, the tower’s ownership has been transferred to many different corporations. Regardless of the ownership, the tower is leased to various companies which enjoy offices in the pristine 42-story skyscraper. 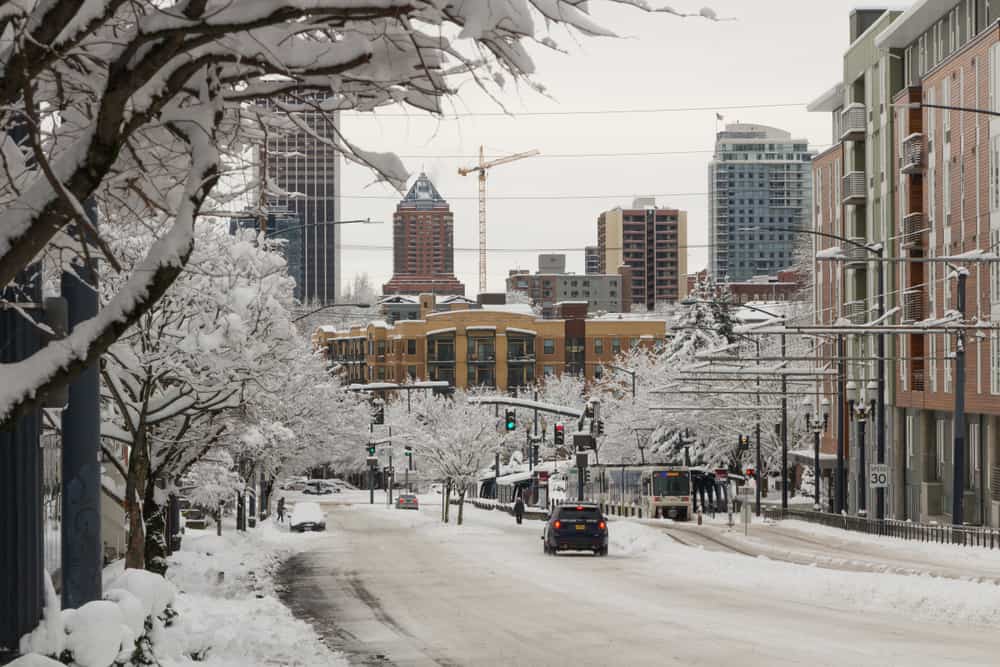 The KOIN Center is a 155 m high skyscraper that was named after its most influential historic inhabitant the KOIN Television corporation.

The 35-story building is the third-largest building in the city behind Wells Fargo, and Bancorp Tower. Designed by the Zimmer Gunsul Frasca Partnership firm in 1984, it is estimated that the tower cost $48 million to construct.

The tower has also been renovated since then so it is likely that even more capital had to be invested. The KOIN Center has undergone a major rebranding in recent years and has been renamed the KOIN Tower to better reflect the site.

During its construction in 1984, the tower was criticized for blocking the Mount Hood view from the Vista Ridge tunnel. However, the tower soon became culturally significant as the popularity of the area increased.

Apart from being the third-largest in the city, the tower is also known for having the largest media wall.

8. Portland City Hall – a beautiful building that is the headquarters of the city government of Portland 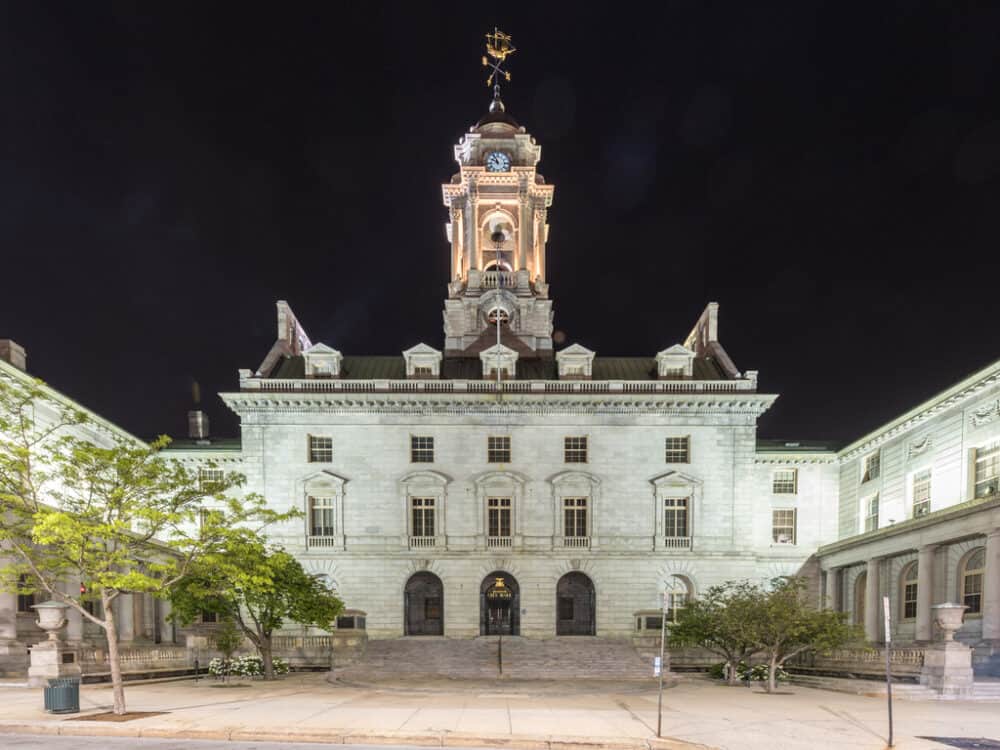 The Portland City Hall is the center of Portland’s government and the main section of the building which is a U-shaped granite structure has the city’s offices.

The building was constructed by Carrère and Hastings and opened in 1909.

The extension of the building on Myrtle street houses the Merrill Auditorium which has a whopping 1,908 seating space.

9. Meier and Frank Building – a magnificent glazed terra cotta structure that features a luxurious hotel with a spacious rooftop 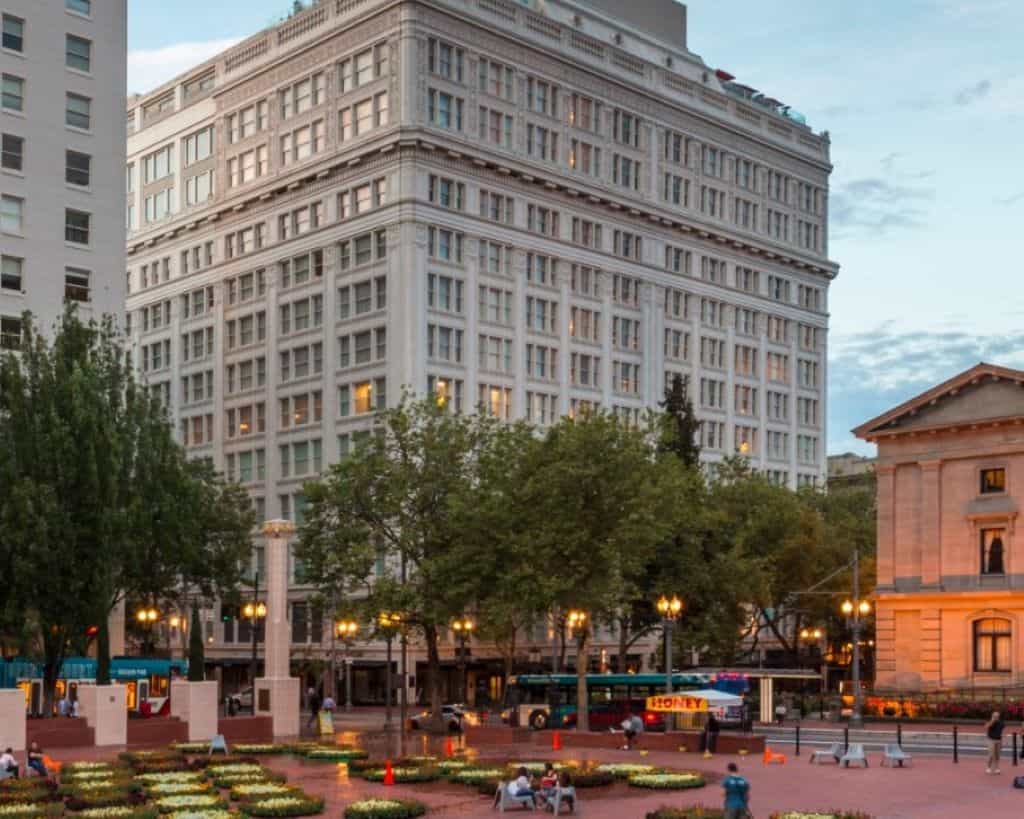 The Meier and Frank building, constructed in 1909, enjoys a busy location in downtown Portland. The site was constructed in glazed terracotta and has 15 floors.

The Meier and Frank building was owned by the May company and was later acquired by its parent company Federal Department stores.

The May Company was closed in 2006 and the Meier and Frank stores were renamed Macy’s. Following this, a 100 million renovation of the building ensued which turned the building into a modern spectacle.

10. Portland Municipal Services – a notable building that has been awarded the American Institute of Architects honor 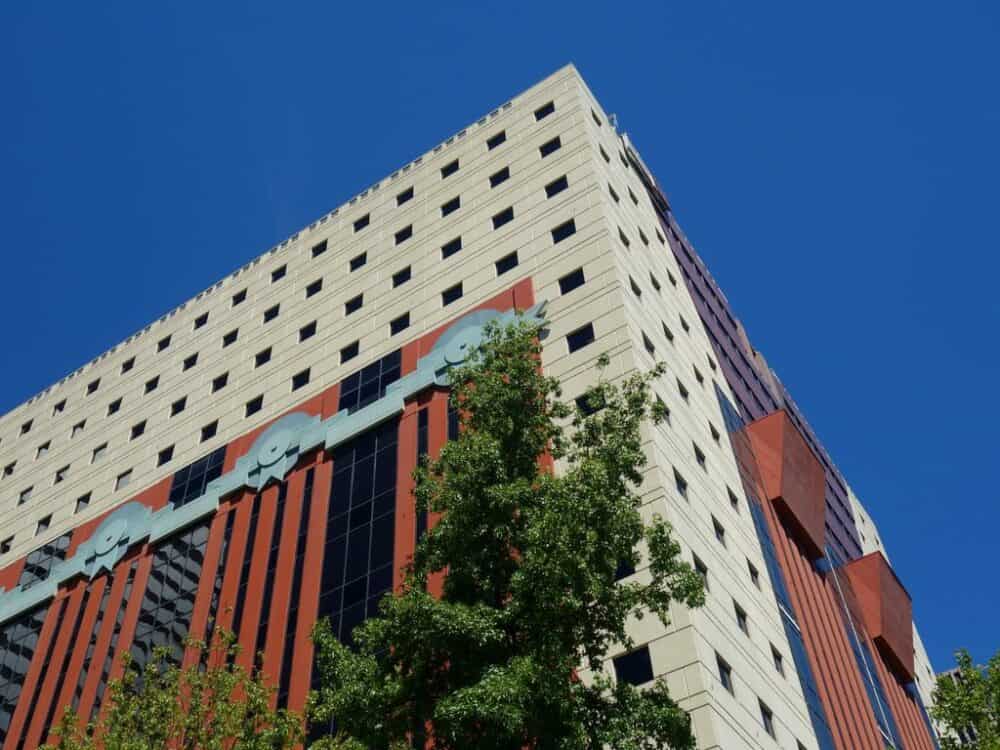 The Portland Municipal Services Building, or the “Portland Building,” was designed by Michael Graves and is located in downtown Portland. The building has been described as a post-modern style with bright colors on its exterior.

It might not be the most famous landmark in town, but it’s definitely one of the city’s best examples of contemporary architecture. The building has 15 floors and houses various municipal offices.

The building was added to the National Register of Historic Places in 2011. 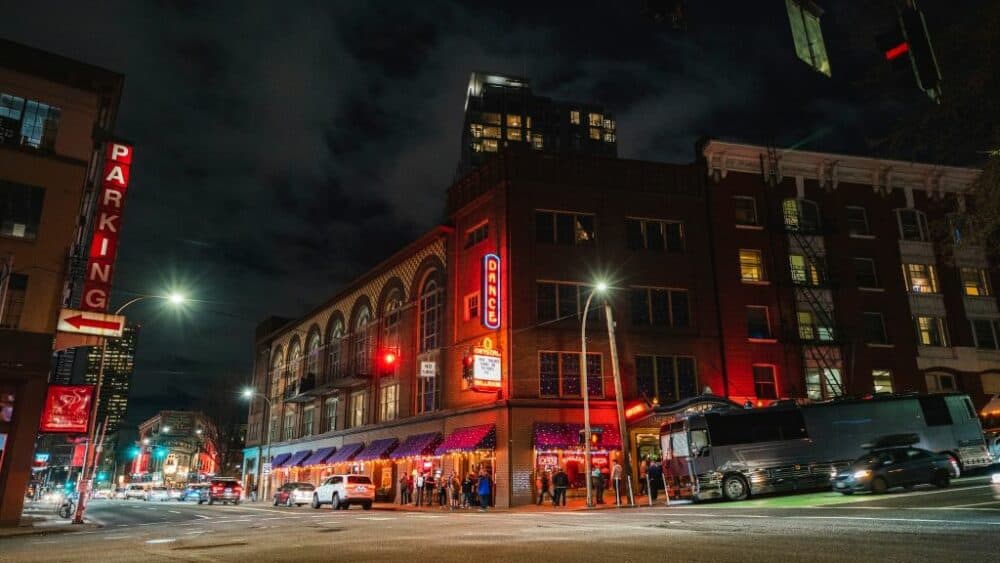 The McMenamins Crystal Ballroom has great historic significance dating as far back as 1914. The ballroom used to be known as Cotillion Center and was a lively place at the time. During the time of the great depression, the ballroom taught dance to the masses.

Along with the 1960s, the ballroom became a symbol of entertainment and hosted many great artists who showcased their skills in various genres.

12. The Old Church – a staggering cultural center that caters for all generations 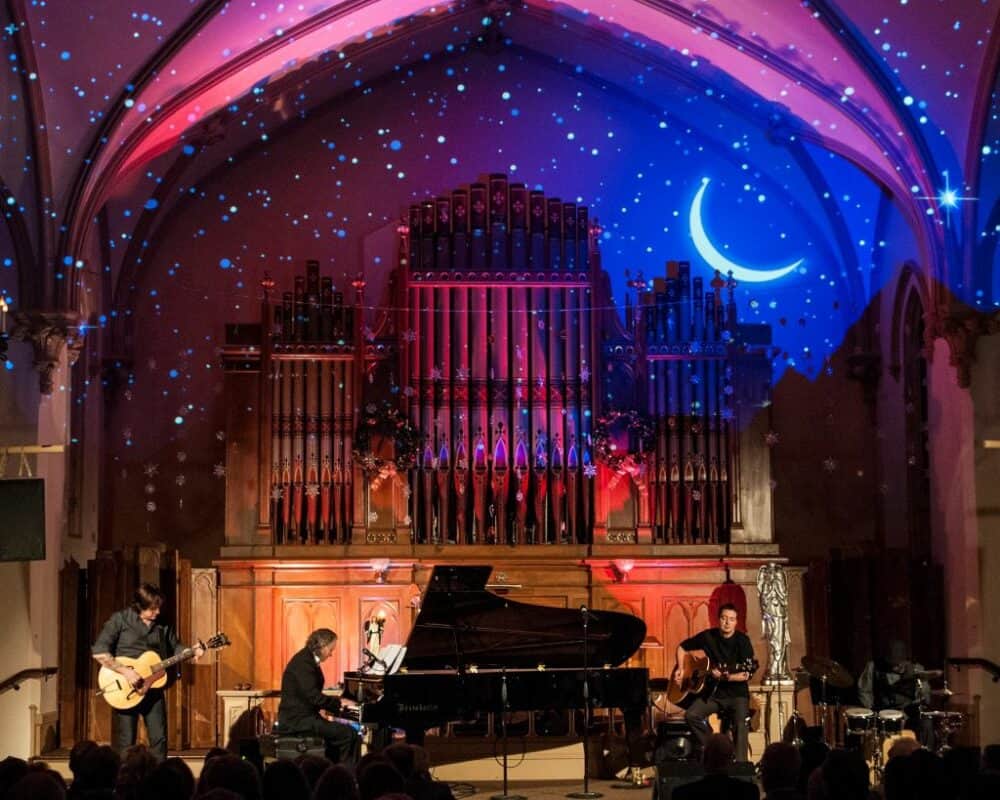 The old church as the name suggests was historically a church that later began to be used as a concert hall. The hall is built in a Gothic, 83-circa style and features an organ pipe.

Over the years, the place has become a symbol of entertainment and is greatly cherished by the residents. The venue regularly holds concerts from various up-coming and seasoned artists. 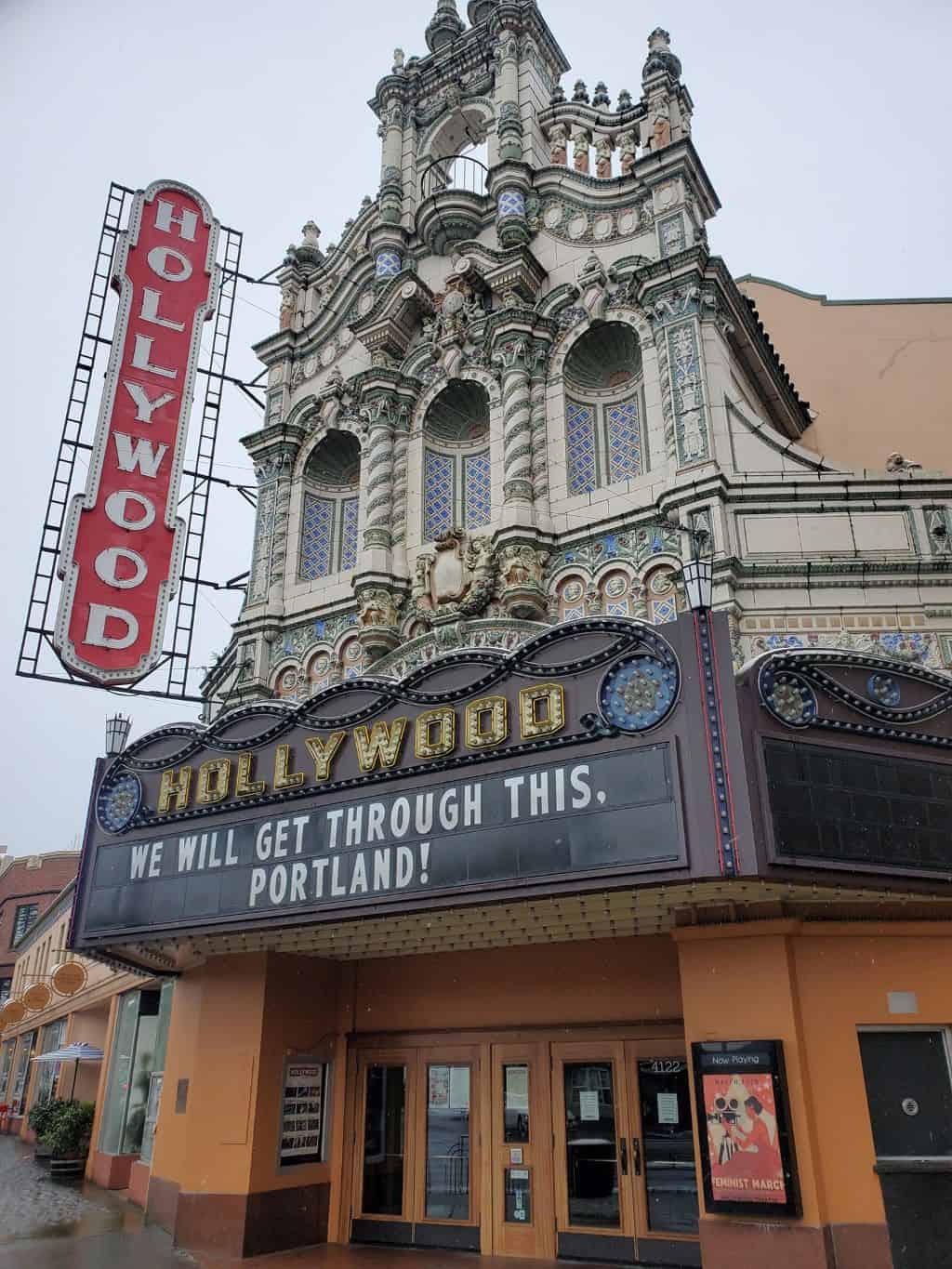 The Hollywood Theater is a historic cinema located in the Northeastern region of Portland. It is considered one of the greatest historic sites in Portland and was added to the National Register of Historic Landmarks in 1983.

The theater is run by a non-profit organization and continues to run both new films and old classics.

Since 2015, the venue has hosted many special guests as well, the most popular being Quintin Tarantino, the mastermind behind movies like Pulp Fiction and the Kill Bill franchise. The theater has three auditoriums, the main one with over 380 seats and two smaller ones with 111 seats each. 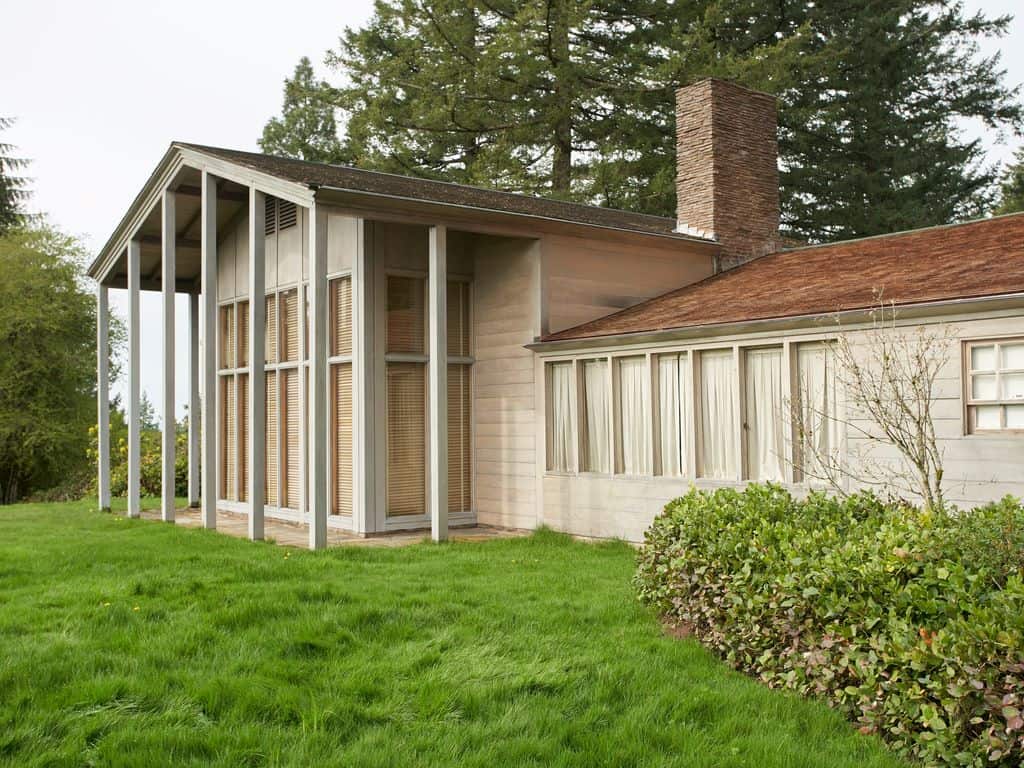 The Aubrey Watzek House featuring a Northwestern Regional style became popular among the residents as soon as it was built in 1937.

The house was built for a lumber magnate and was considered at the time as a modern spectacle. The house is surrounded by a well-kept yard with its own swimming pool.

The structure of the house is based on a U-shaped configuration made in a wooden structure. The rooms inside have been constructed to maximize openness and blend the outside views with the interior. 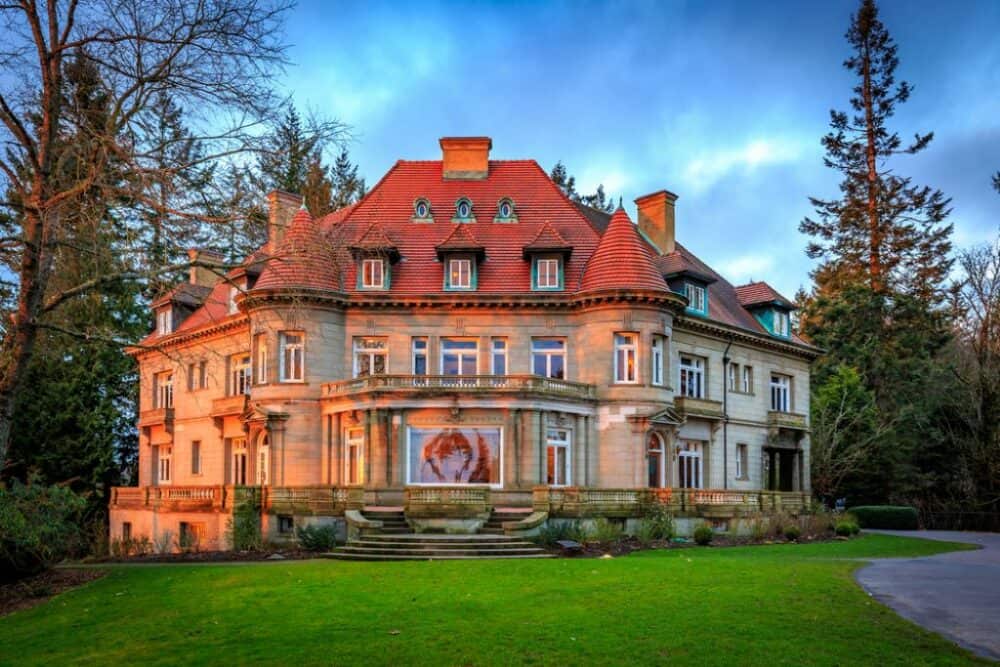 The Pittock Mansion was inhabited by an artist named Henry Pittock and his wife. The construction of the chatéu began in 1909 and ended in 1914.

The mansion is built in an Italianate style and is currently owned by the Bureau of Parks and Recreation which allows tours of the house.

The mansion has 46 rooms and is spread over 46 acres of land.