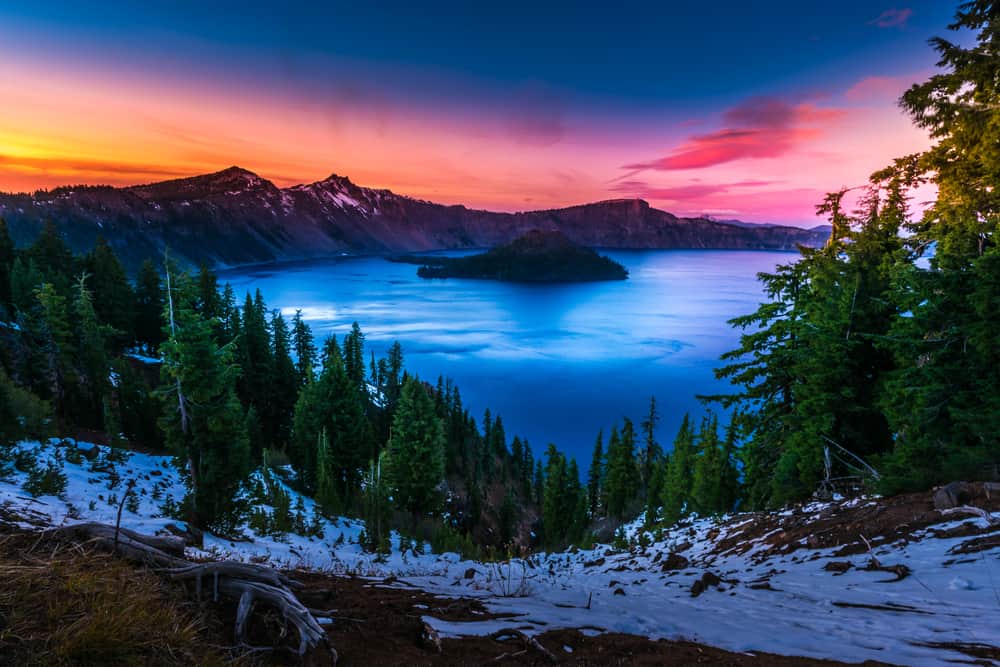 From Portland and thinking of taking a trip to Crater Lake? You have several options to reach the destination, depending on your preference and budget… 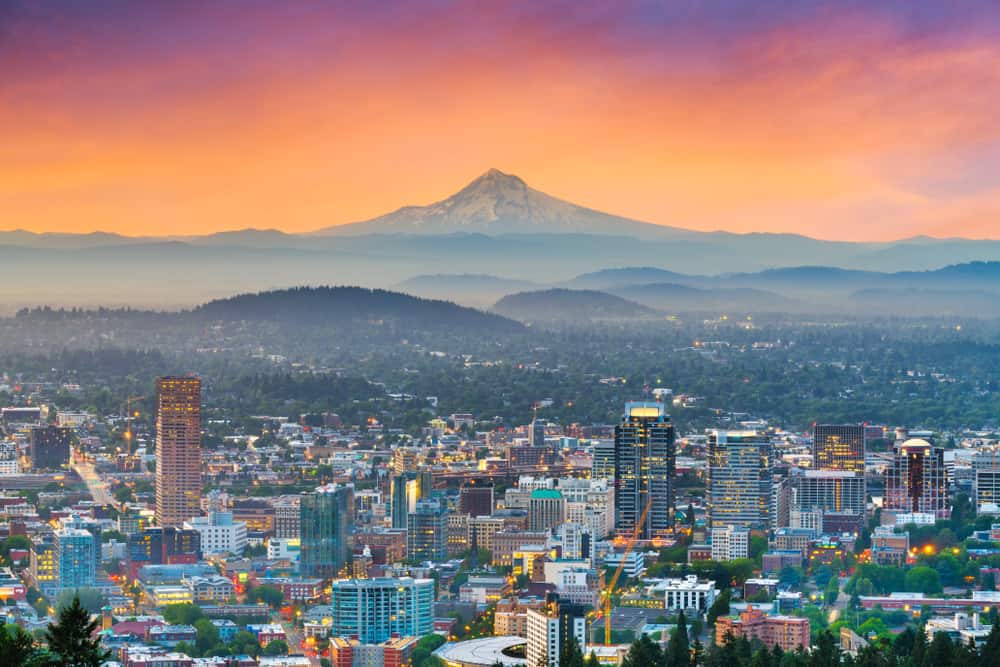 Portland is a city in Oregon known as the largest and most populous in the state. The daily hustle includes vacationers going in and out of the city, making it a travel hub in the country’s northwestern area. Transportation options include by air and by land via bus or train.

People from long-distance regions can ride the Greyhound bus, Amtrak trains, or book a flight. As for local travelers, an intercity bus service takes them to and around the city along with TriMet buses, the MAX Light Rail, and streetcars.

Buses and trains abound in Portland Union Station, featuring elegant architecture and its eye-catching neon sign. It’s the central travel zone in Portland, complete with a restaurant, bar, and lounge exclusive for first-class and business passengers. 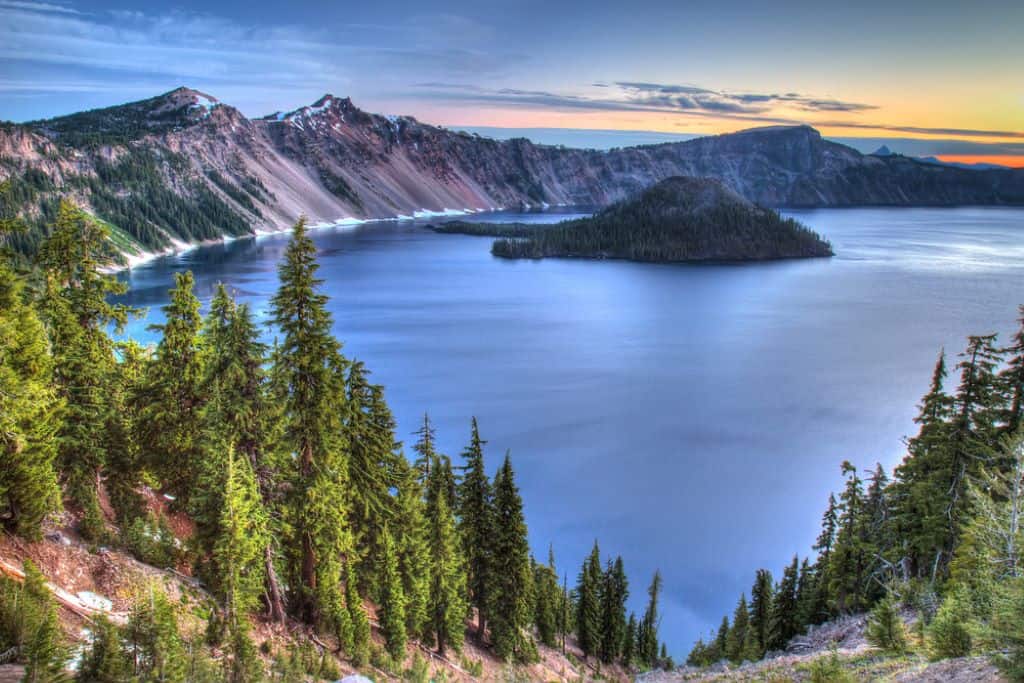 Crater Lake is a breathtaking vacation spot located in the southern region of Oregon. It offers spectacular views of nature, specifically the country’s deepest lake, Crater Lake, which boasts a 1,943-foot depth.

Planes, trains, and buses are the common modes of transport to and from Crater Lake, OR. As a popular tourist destination, Crater Lake vacationers from distant states in the US come in by commercial flights to Portland and Medford.

Daily Amtrak train services are available, around 63 miles from the park’s headquarters. You can also reach Crater Lake via a shuttle from July to early September. There is no public transportation in the park’s vicinity at the time, but buses, trailers, and RVs are allowed access to the entrances.

Traveling from Portland to Crater Lake

Portland and Crater Lake are both located in Oregon, with only 180.35 miles sitting between them. Here are some transportation options for travelers who want to visit the national park from Portland.

By Air and Bus – Portland to Medford 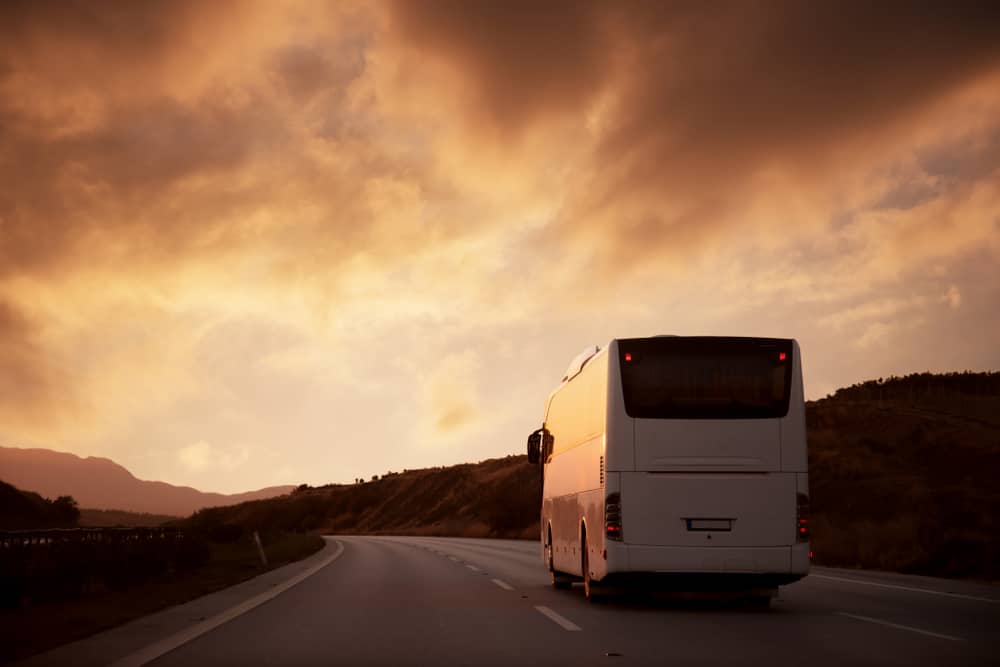 People who don’t want to ride by car can fly commercially from Portland to the closest airport near Crater Lake, which can be found in Medford, Oregon.

The flight between Portland Airport (PDX) to the Rogue Valley International Medford Airport (MFR) lasts about an hour. Alaska Airlines, Inc. offers two flights to MFR, one departing from PDX at 7:27 from Mondays to Sundays. Another flight servicing the area leaves at 5:40 pm every Monday, Thursday, Friday, and Sunday. Delta Air Lines also flies daily to Medford with a connecting stop at Seattle (SEA) Airport.

The lowest price for nonstop flights from PDX to MFR is around $50, while one-stop journeys are roughly $100.

When in Portland, you can head to the airport by taking the MAX Red Line tram from the Chinatown or Old Town station. The 11-mile trip lasts about 33 minutes and costs around $2.50 only.

Medford is about 70 miles to Crater Lake based on car travel. Once you arrive at MFR, you can take the bus service provided by Point from the airport to Klamath Falls, the nearest stop to Crater Lake. From Klamath Falls, you can ride the Amtrak 8791 or 8794, which serves the route twice daily at about an hour and 30 minutes journey.

Trips by bus can cost you anywhere from $27 to $58, depending on the season and other factors.

Although the Crater Lake-Klamath Regional Airport is fully operational and closer to the destination than MFR, no direct commercial flights are available. Only corporate and private flights are welcomed in the airport as of press time.

By bus – Portland to Crater Lake via Medford 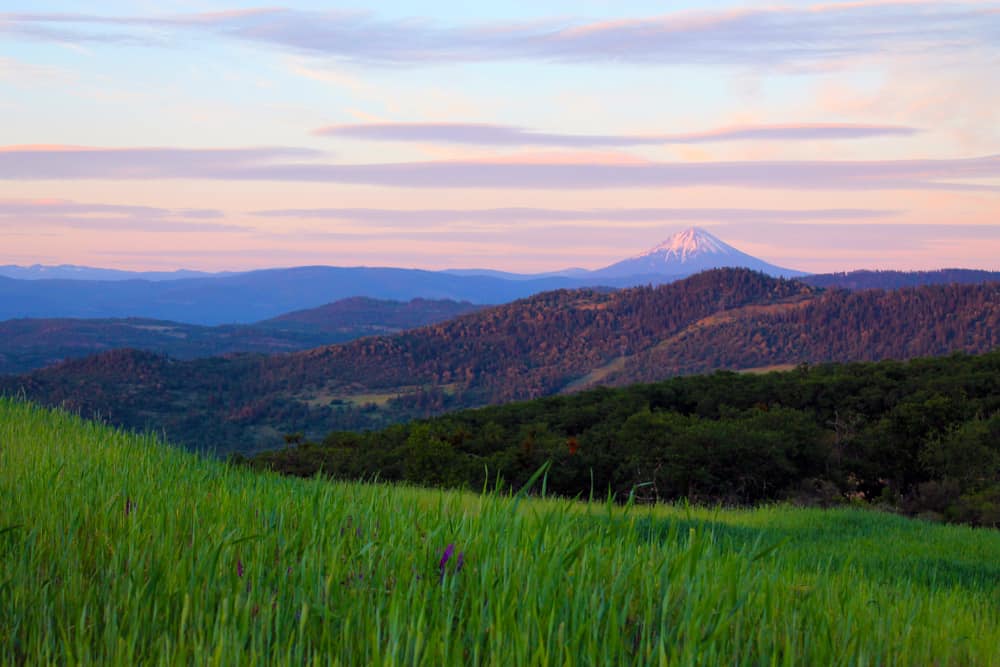 If you want to skip flying and would rather travel by land, you can ride a Greyhound service via Medford. They offer trips twice a day, with the first bus departing at 7:00 am from Portland and arriving at the Medford Bus Station by 1:35 pm. The second trip leaves the city at 6:45 pm and arrives the next day at 1:05 pm.

The travel time from Portland to Medford by bus is approximately 6 hours and 35 minutes. There are six stopovers throughout the journey, which typically takes only about five minutes at each stop. You can buy tickets for about $52 at the station or book them beforehand online.

From Medford, you can catch the connection the same way as when traveling by plane from Portland. You can take the Point bus that leaves the Medford Front Street Station at 4:40 pm and arrives in Klamath Falls by 7:30 pm. This leg of the journey can cost about $10 to $33 and is approximately 2 hours and 50 minutes long.

By bus – Portland to Crater Lake via Klamath Falls 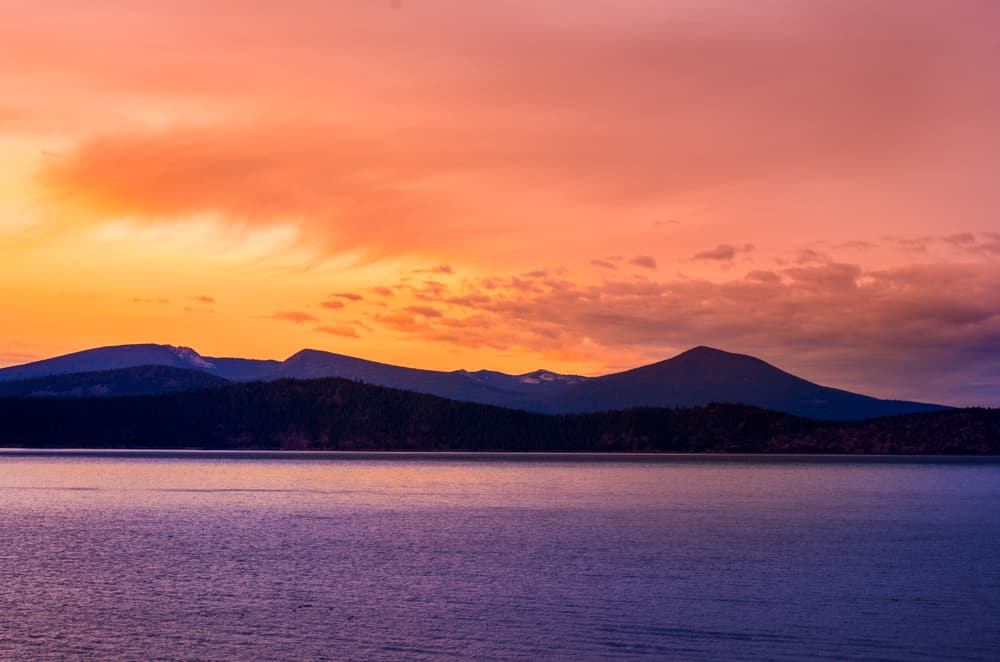 Alternatively, you can catch a bus from Portland to Klamath Falls, although the journey can last over half a day at approximately 12 hours and 30 minutes. From Portland Union Station, you can catch a Greyhound bus that leaves at 7:00 am and arrives in Eugene, OR at 9:50 am.

The bus makes another stopover in Bend, OR before traveling to Klamath Falls, lasting about 3 hours and 30 minutes. This option can cost you around $66 for the whole journey.

Amtrak also services the same route and leaves simultaneously as the Greyhound bus. It arrives in Klamath Falls Station at around 7:30 pm and costs roughly $100. Then, you can take the daily Amtrak bus to Crater Lake.

If you prefer to catch the Greyhound bus, you can book your tickets online or right at the Union Station. This bus service has three ticket types: flexible ticket, Economy Extra ticket, and the Economy ticket.

When you have a flexible ticket, you can exchange or refund it anytime without paying a surcharge; it also lets you bring two bags stored under the bus and a carry-on bag. With Economy Extra, you are allowed a bag, a carry-on, and priority boarding privilege. You can exchange this ticket on the same day or change your trip before the travel date for $20. For Economy ticket holders, you are allowed one under-bus baggage and a carry-on and change your booking for $20. This ticket is non-refundable.

By train and bus – Portland to Crater Lake via Klamath Falls 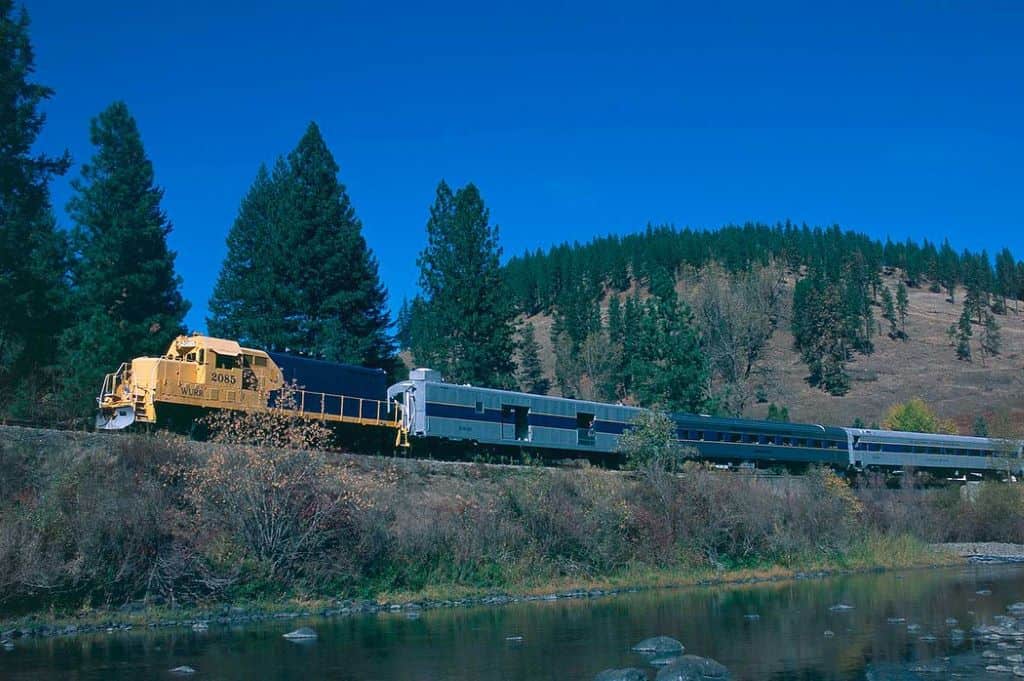 Another excellent travel option is by train, although you can’t arrive directly in Crater Lake because there is no regular train service in the area. The closest train station is at Klamath Falls, OR.

From Portland, you can take Amtrak’s Coast Starlight Train # 11 to Klamath Falls with a travel time of 7 hours and 36 minutes and 232 miles separating these two stops. The train leaves the Portland Union Station at 2:22 pm and arrives in Klamath Falls at 9:58 pm.

The coach seat starts from $48 and includes seat-lighting, an outlet, and a tray table for every passenger. You also have the option to book a business class seat from $73 or a sleeper service, which costs about $760 for the family bedroom and around $808 for the private bedroom with turndown service.

Aside from the wide range of seat selections, you can also access the dining car, sightseeing lounge car, and a café while aboard the train. Train rides offer superb comfort, thanks to the extra legroom for every seat. Each car has a restroom, free WiFi, and power outlets.

You can book your Portland to Klamath Falls ticket in advance using the Amtrak website or by calling +1800-871-7245. 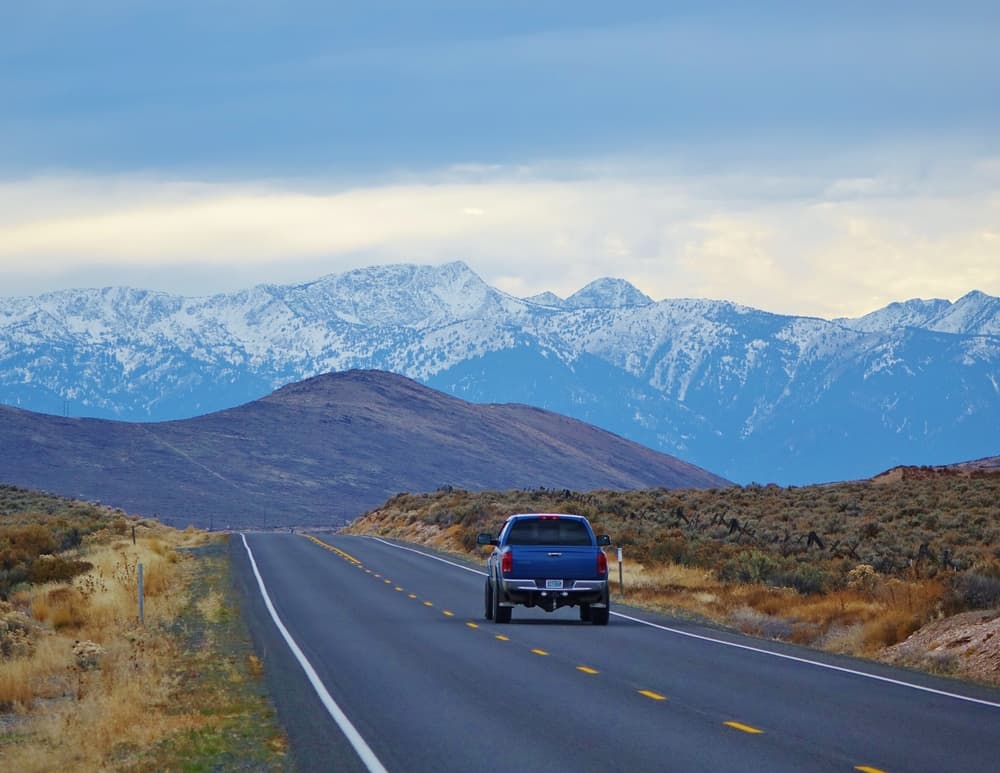 For travelers wishing to have more flexible stopovers, you can drive from Portland to Crater Lake. Along the ride, you can pass by some of Oregon’s natural wonders.

Several routes can take you from Portland to Crater Lake, but two main routes are the most common choices for first-time and seasoned vacationers alike.

Firstly, you can take the scenic route by Interstate 84 E through the Columbia River Gorge going to Hood River. You can then drive the 35 down to Mount Hood by taking the US Route 26 E highway. Finally, you can traverse the US Route 97 highway to Bend, which takes you to Crater Lake National Park. The total duration of this 298-mile journey is 5 hours and 15 minutes.

Another way takes you from Route 26 E to Route 97 S, which can be considered a straight path to Crater Lake that doesn’t pass Columbia River Gorge or the Hood River. You will still be speeding through Mount Hood and every stop after that. This route is 255 miles long and lasts for about 4 hours and 30 minutes.

It’s ideal to leave Portland with your car filled up entirely if you’re planning to visit a few stops along the way. A reasonable estimate of fuel costs for this trip would be around $75 to $150.

While there aren’t direct flights, trains, or bus services to Crater Lake from Portland, you can drive your car or book a rental or taxi that will take you straight to the destination. This way, you don’t have to go through transfers from plane to bus or train to bus. You can pass different cities en route and take a few snaps of Oregon’s natural beauty when you travel by land.