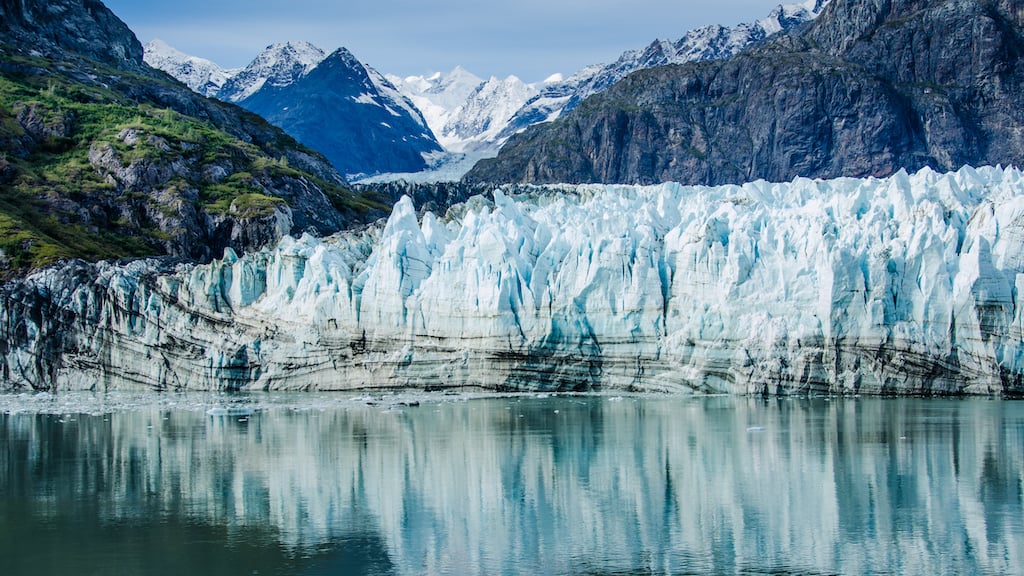 Arguably one of the world’s last true frontiers pristine lakes and glaciers glisten and sparkle and where wild animals roam and rule. The sprawling US state located on the country’s West Coast is a must for wilderness purists, adventure seekers, and those searching for a destination with truly unspoilt scenery – this is easily one of the most extraordinary places to visit on the planet. From scenic railroads to places where bears, moose, and coyotes roam, here are the best and most beautiful places to visit in Alaska, USA…

1. The Alaska Highway – one of the world’s most scenic road routes 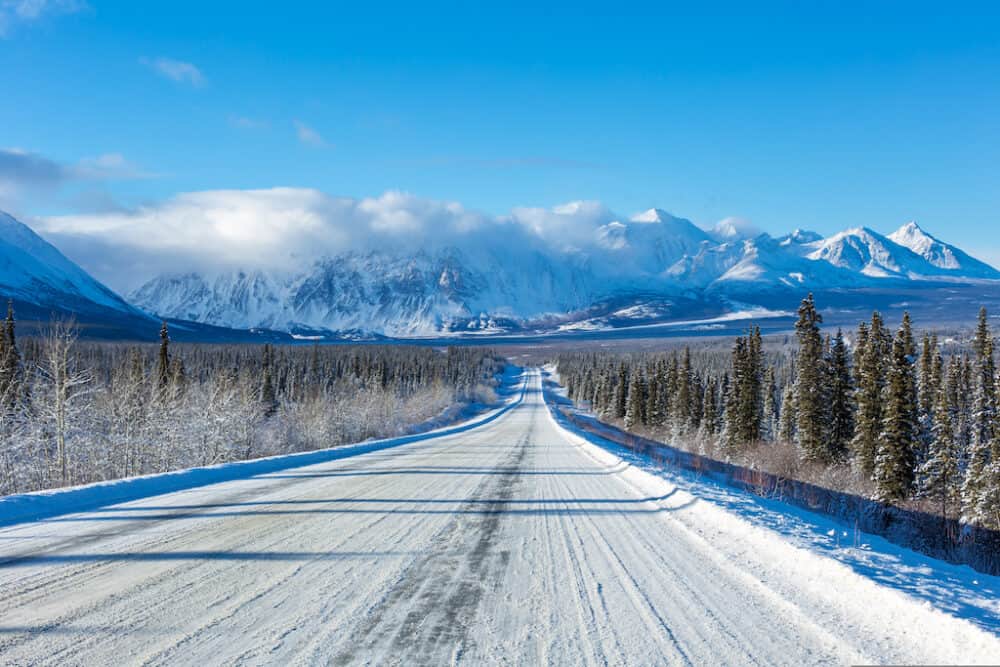 This majestic highway built during the World War 2 era to connect between the two neighbours United States and Alaska. The highway would pass through Canada. The picturesque highway while first completed in 1942 was a whopping 2,700 kms long and is now 2,232 kms with all the reconstruction of it over the decades.

This stellar and beautifully scenic highway is unofficially known to be a part of the Pan-American Highway, which extends up to Argentina in the south. Expect stunning wilderness scenery and the chance to spot all sorts of incredible wildlife. 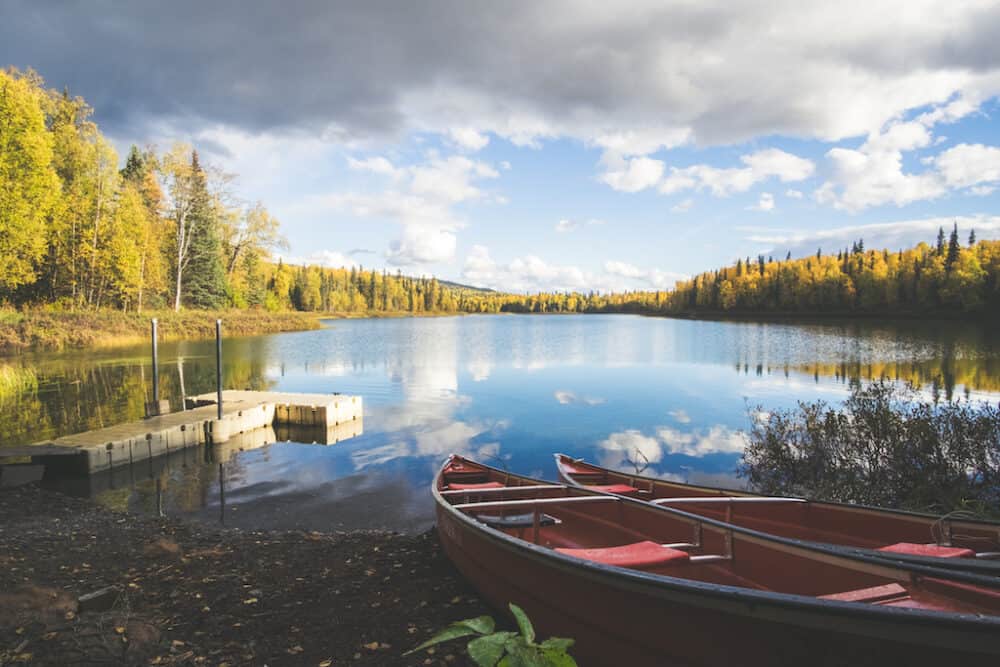 This census-designated place (CDP) is located in Matanuska-Susitna Borough in the state of Alaska. This quaint little town has long bouts of winters and an extremely short duration of hot days. You could explore several options of sightseeing in this town and some of the activities to try out would be mountain biking, hiking (there are several great trails in the area), camping, ziplining, and a river tour.

The town is also a two-and-a-half-hour drive from Anchorage, the largest city in the state and here you’ll also find interesting shops, bars, restaurants, and breweries as well as a fantastic backdrop of the Alaskan Range and Denali (Mt. McKinley).

3. Mendenhall Glacier – one of the most beautiful and accessible glaciers to visit in North America 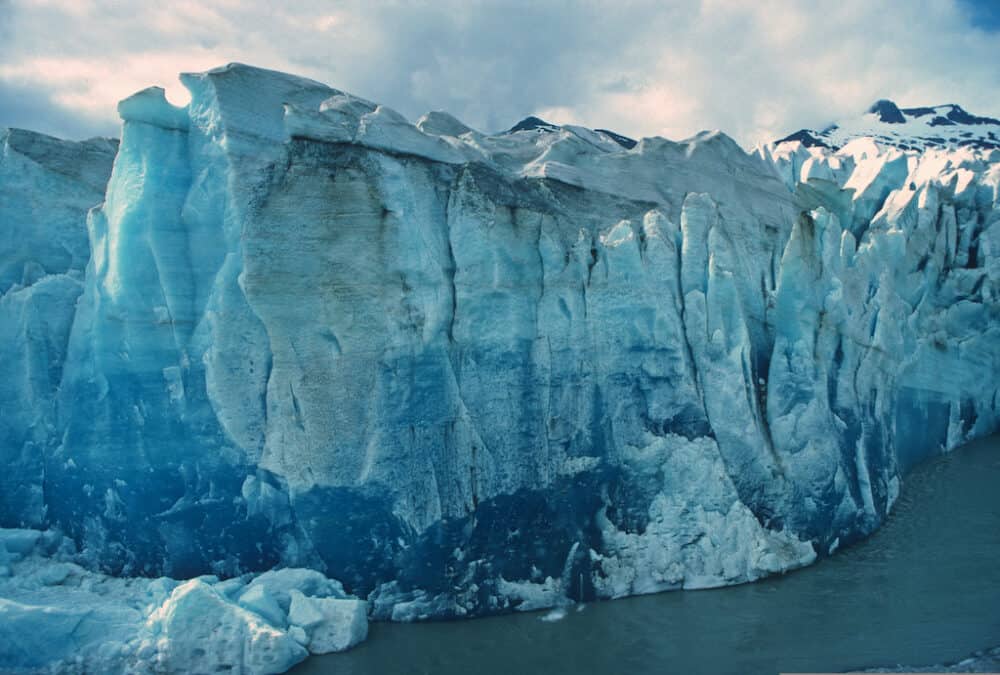 This glacier is located in the Mendenhall Valley and is about 21.9 kms long and the nearest Alaskan town is downtown Juneau. The surrounding landscape around the glacier is protected as part of the Mendenhall Glacier Recreation Area and is also a federally designated area of the Tongass National Forest. It was previously named Sitaantaago – The Glacier Behind the town. Easily one of the most beautiful places to visit in Alaska!

4. Denali National Park and Preserve – one of the most stunning places to explore in Alaska which is home to North America’s tallest peak 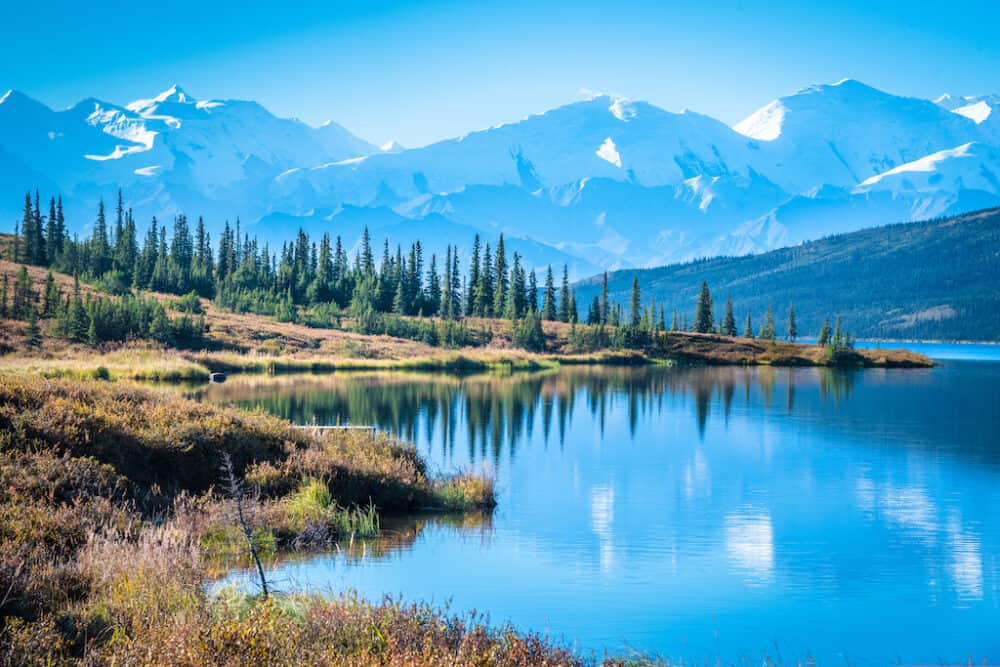 The Denali National Park and Preserve is a whopping 6-million acres of the wilderness of interior Alaska. The centermost point of the National Park is the 20,310 feet high Denali. It is also known as Mount McKinley, North America’s tallest peak.

The gorgeous terrain is home to several glaciers, spruce forests, tundra, and the extremely famous wildlife species like grizzly bears, wolves, moose, and so on. The Denali National Park is also your spot for summer activities like backpacking, hiking, biking, and mountaineering.

5. Gates of the Arctic National Park – a vast and essentially untouched wilderness park to explore in Alaska 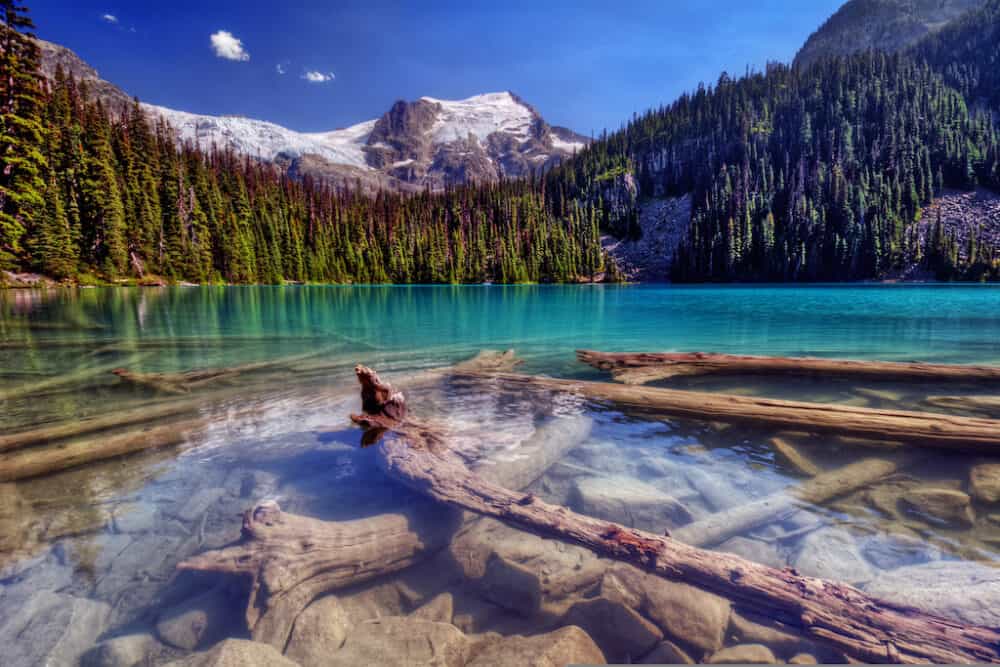 This National Park in the state of Alaska protects the several portions of the Brooks Range. It is located entirely in the northern part of the Arctic Circle. It is the second-largest park in the US and is also said to be a little larger than the country, Belgium.

There aren’t any proper approach roads to this park and the fact that it’s extremely remote and lack of any supportive infrastructure. These reasons make it the least visited national park in the country. Camping is allowed and might have restrictions at some points. Fairbanks is the headquarters of the park.

6. Sitka – an interesting town to visit which was once the capital of Russian America 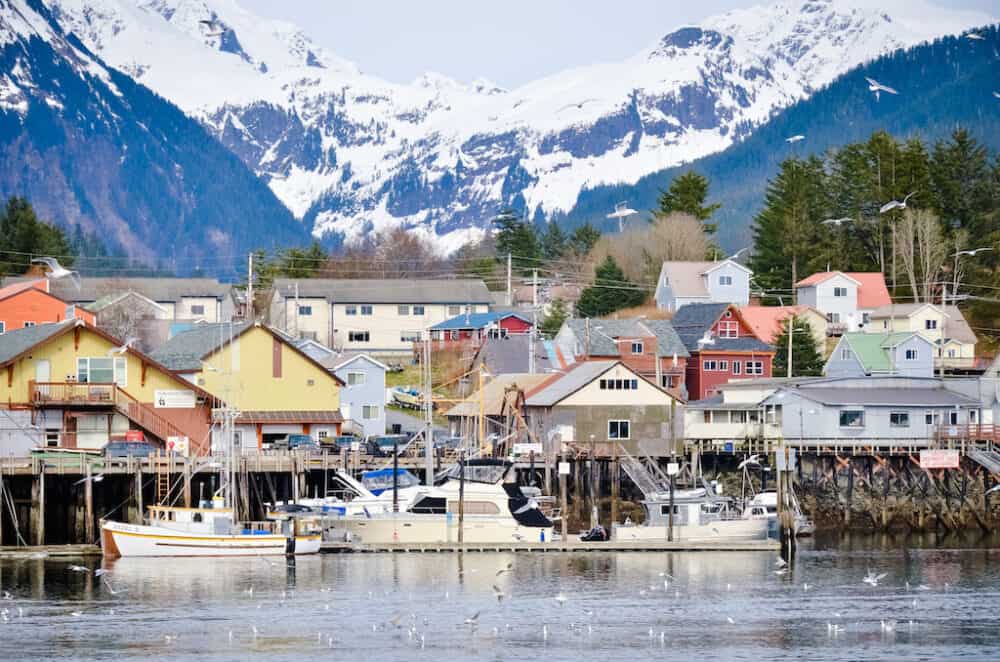 This Alaskan city is located near Juneau, the capital of the state. Sitka is said to be a girl’s name and the Alaskan meaning of it is ‘people on the outside of Shee’. It is said to be the second-oldest city in Alaska and had been founded by Russians in 1799 as a fur-trading post.

The Sitka National Historical Park is said to be the site of Russia’s defeat of the Tlingit’s, who are indigenous people of the state. There are some great historic landmarks and buildings here as well as fantastic opportunities for hiking and wildlife watching – definitely a must-see destination in Alaska.

7. Lake Clark National Park – known as being one of the most beautiful places to visit in Alaska 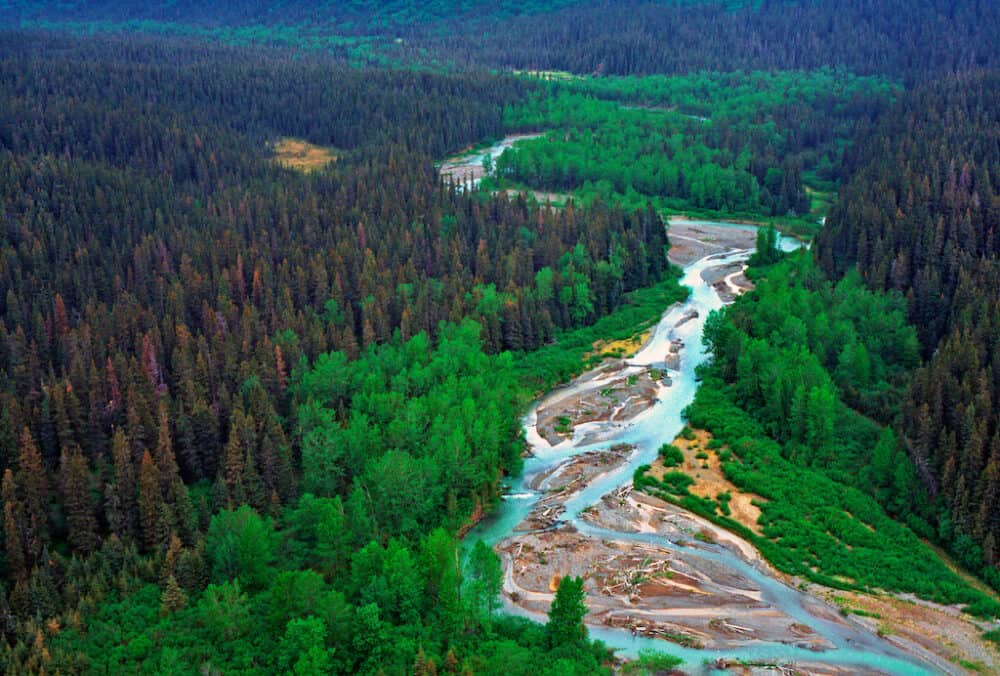 This National Park is situated towards the southwest of Alaska and around 100 miles from Anchorage. It was declared a national monument in 1978 and this park is stunning with craggy mountains, volcanoes steam, and is nature in all its glory. The turquoise lake is famous for its see through color as well.

The national park has several accommodation options as well. There are several lakes within the national park to explore including The Chilikadrotna River, Tlikakila River, Turquoise Lake, and the Kontrashibuna Lake. 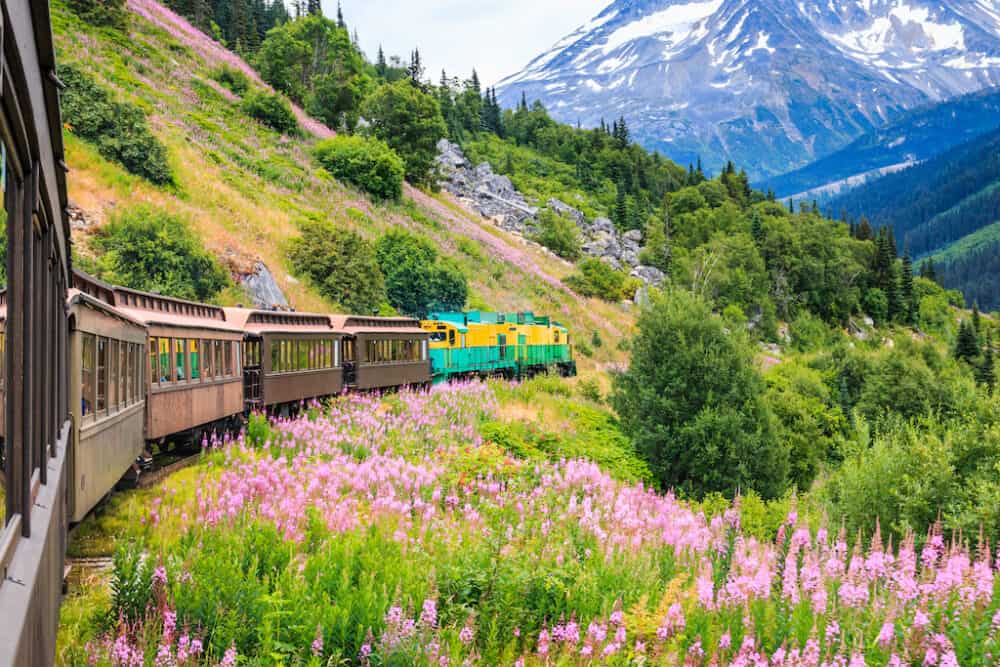 The stunning and scenic White Pass and Yukon Route is a US and Canadian Class II narrow-gauge railroad and is definitely an activity I’d recommend when visiting beautiful Alaska. It was built during the Gold Rush years in 1898 against some pretty challenging terrain.

This railroad links the port of Skagway in Alaska with Whitehorse known as the capital of Yukon. It is an isolated system and has no other connection to any other railroad. This route is used to ferry passengers, freight, and heavy equipment as well.

It’s a joy to travel on and whilst on the incredible journey you’ll climb nearly 3,000 feet. Expect scenery such as panoramic views of towering mountains, sparkling glaciers stunning gorges, beautiful waterfalls, and tunnels so don’t forget your camera! 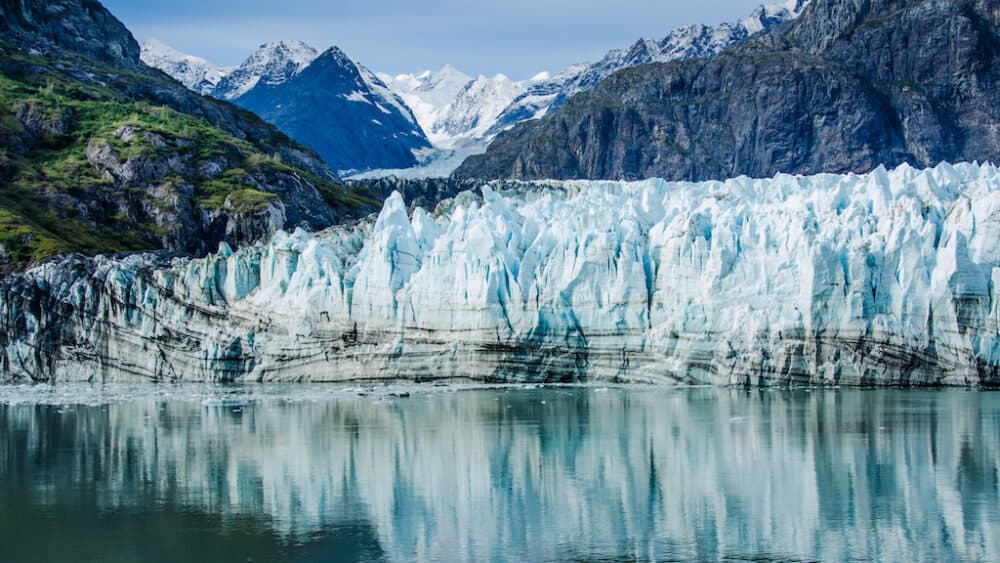 This place is truly incredible and where you can expect jaw-dropping scenery. The 3.3 million acres are home to towering mountains, majestic glaciers, deep sheltered fjords, rainforests, and wild coastlines is truly a force to reckon with. It is considered as the highlight of the state’s Inside Passage and is a part of the 25-million acre World Heritage Site.

The Glacier Bay National Park is one of the world’s largest protected areas. The interesting fact about this national park is the only two ways to reach it is either by flight or by boat. The only road just connects you to the nearest town which is Gustavus. 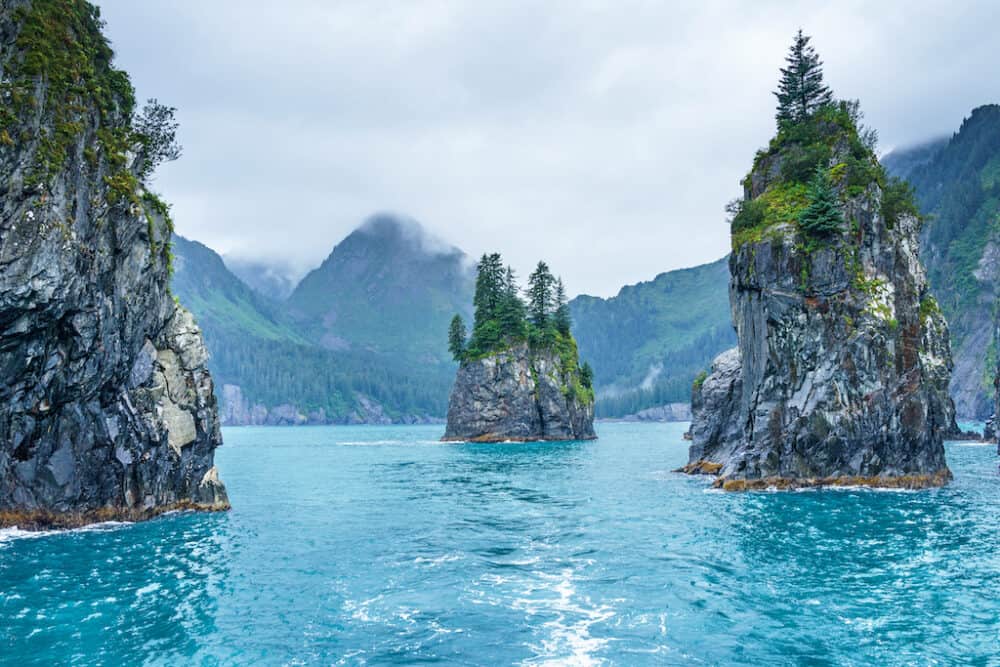 This beautiful and unique National Park was established back in the ’80s by the Alaska National Interest Land Conservation Act. It is located on the Kenai Peninsula and the nearest town is Seward. It is known for its fjord and rainforest ecosystems, wildlife species, Harding Ice field, and several archeological and historical remains as well.

The National Park is the home to several species like the black bear, brown bear, lynx, hoary marmot, mink, moose, porcupine, shrew (five species), red squirrel, and more. It is also just a drive away from Anchorage, Alaska’s largest city. Anchorage is 126 miles away from the national park. Easily of the most beautiful places to visit in Alaska. 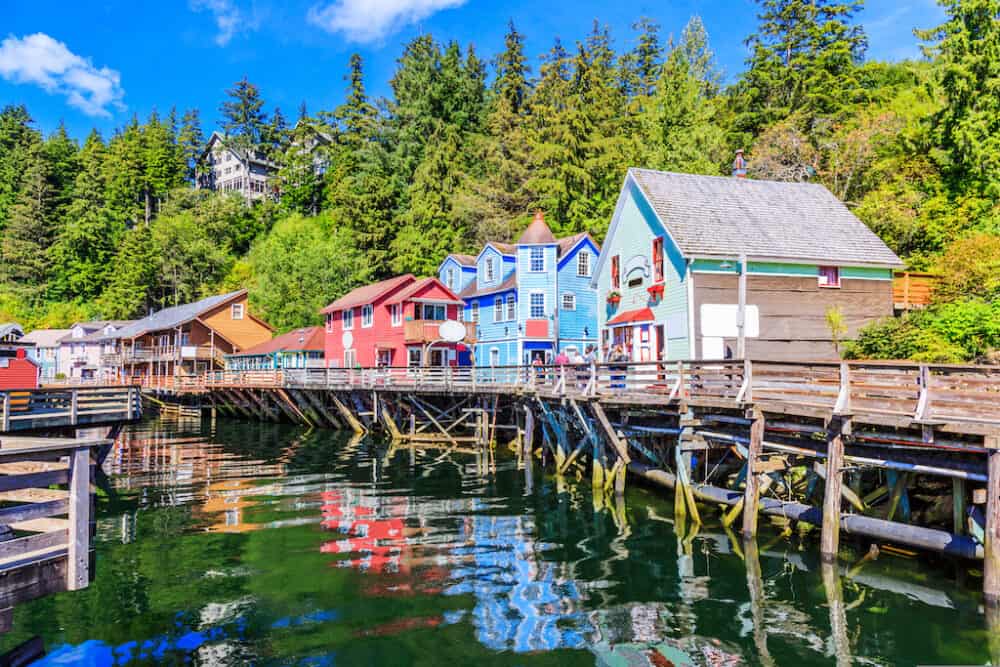 This Alaskan city faces the inside of Passage which is a known and popular cruise route that goes by the state’s southeastern coast. Ketchikan is famous for the several Native American totem poles which are displayed all over the town.

The Misty Fiords National Monument is carved in the shape of wilderness and features snowcapped mountains, streams that are famous for salmon fishing, and waterfalls– the known factors about Alaska. Some of the top sights surrounding Ketchikan include the Totem Heritage Center which dates back to the 19th century, the South East Alaska Discovery Center, and The Creek Street in the city.

12. Prince of Wales Island – the fourth-largest island in the US which is the home to several types of bears 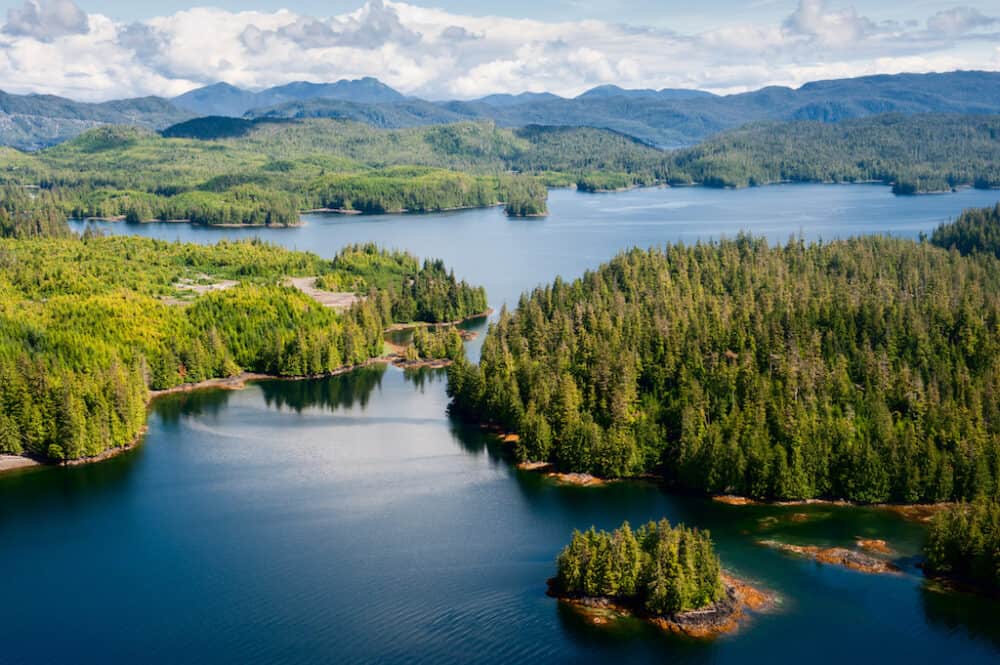 The Prince of Wales Island is the fourth-largest island in the US and is one of the islands of the Alexander Archipelago. This community has a population of 6,000 people and was founded as a saltery in the 20th century.

The easiest way to reach these stunning islands is by air and that is specifically during the summer months and Alaska Air operates both in winter and summers. There are several bear viewing spots on the island for wildlife enthusiasts as well.

13. Baranof Island – famed for its brown bears and Sitka deer 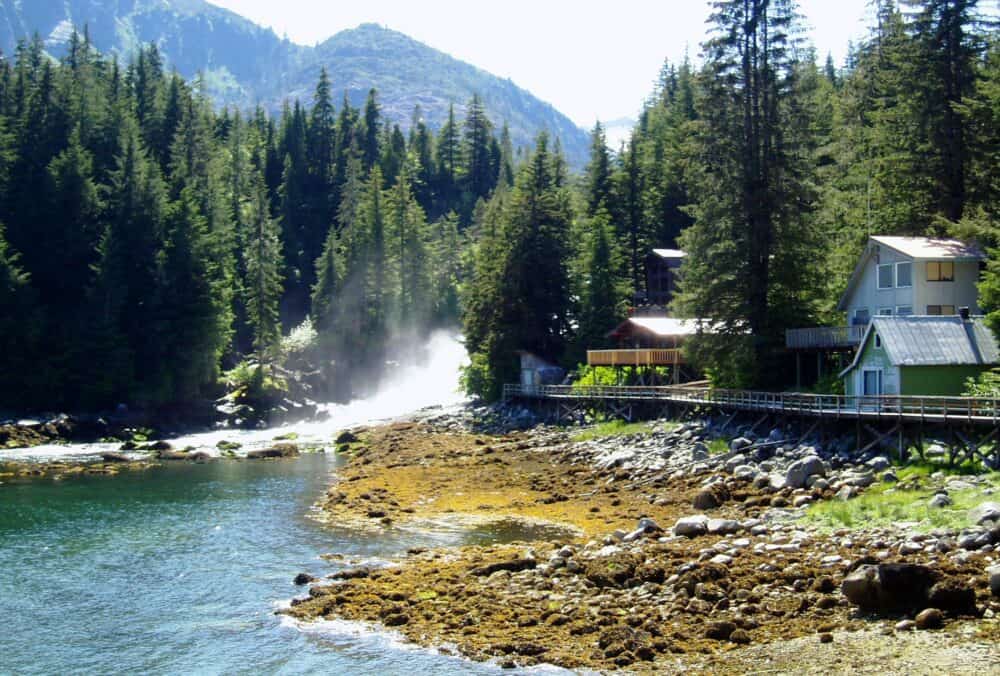 Baranof Island, also known as Baranov Island is located in the northern Alexander Archipelago in the state of Alaska. It was named by Imperial Russian Navy Captain U.F.Lisianski to honour Alexander Baranov, a Russian trader, and merchant.

The beautiful island is a little larger than the state of Delaware and the islands hosts the highest mountain in the Alexander Archipelago as well. It’s also a stunning and unspoiled wildlife haven and is famous for being home to brown bears and Sitka deer.

14. Wrangell-St. Elias National Park – is home to some of the largest volcanoes and the greatest concentration of glaciers in North America 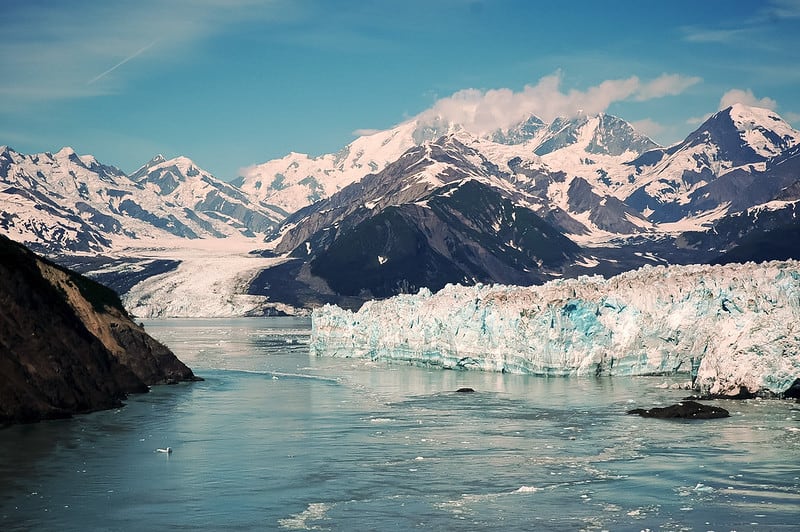 This National Park was established in 1980 by the Alaska National Interest Lands Conservation Act. It is around six times larger than the Yellowstone National Park which is a favourite amongst tourists. This park is famous for being home to some of the largest volcanoes and greatest concentration of glaciers in the whole of North America – this truly is one of the most stunning places to explore in Alaska.

If you decide to visit this picturesque and scenic national park, there are a lot of options for one to stay. The Mount Wrangell is the only active volcano in the whole of Wrangell Mountains.

15. Tangle Lakes – a long chain of stunning lakes to explore in Alaska 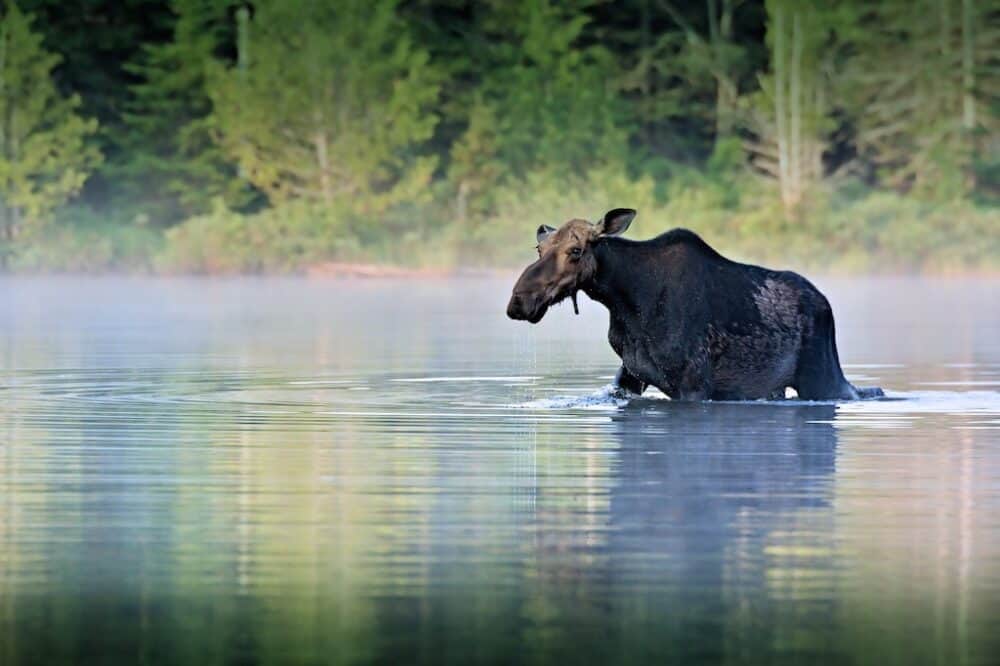 Tangle Lakes is a beautiful chain of lakes to visit in the interior of Alaska that is connected by several streams. These lakes form the headwaters of the Delta River in the state and have been the point of detailed archeological exploration for years. The lake provides access to campgrounds and there are around 45 sites for you to camp from!

These sites are provided with water pumps, toilets, and a boat lunch as well. The Tangle Ridge Hiking Trail is extended around these grounds gives you a stunning view of these beautiful lakes and also expect to spot plenty of interesting Alaskan wildlife here – especially Caribou and Moose.