The gorgeous state known for its jaw-dropping coastal scenery, bohemian communities, and its wonderful mix of mountainous and forested inland landscapes is easily one of America’s most unique and extraordinary states. From a city with a strong cultural identity and progressive ideals to volcanoes, glaciers, and fossil-strewn deserts, here are 15 of the best and most beautiful places to visit in Oregon, USA… 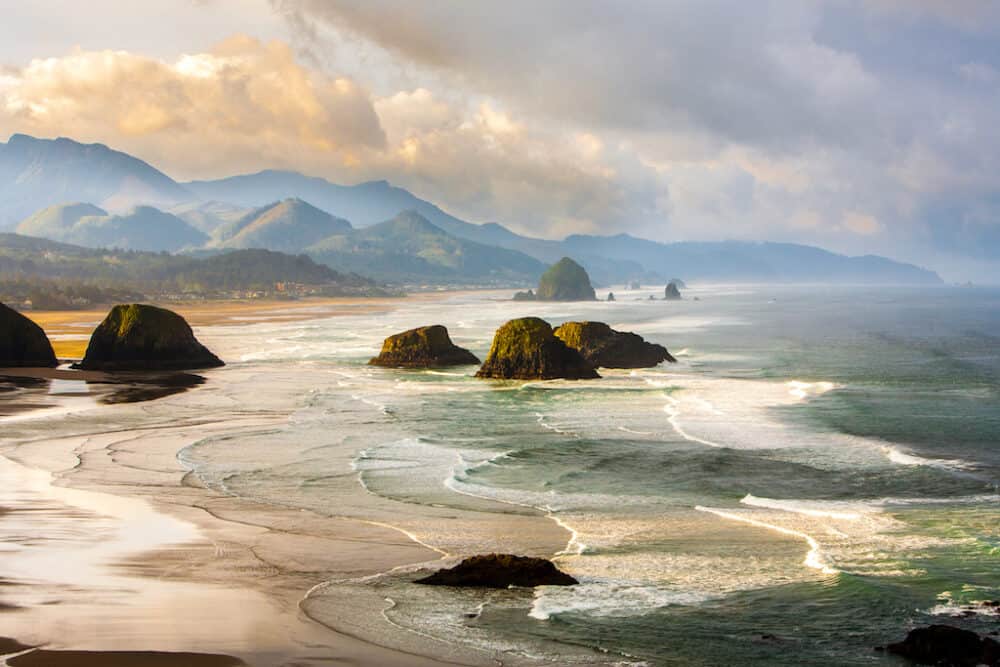 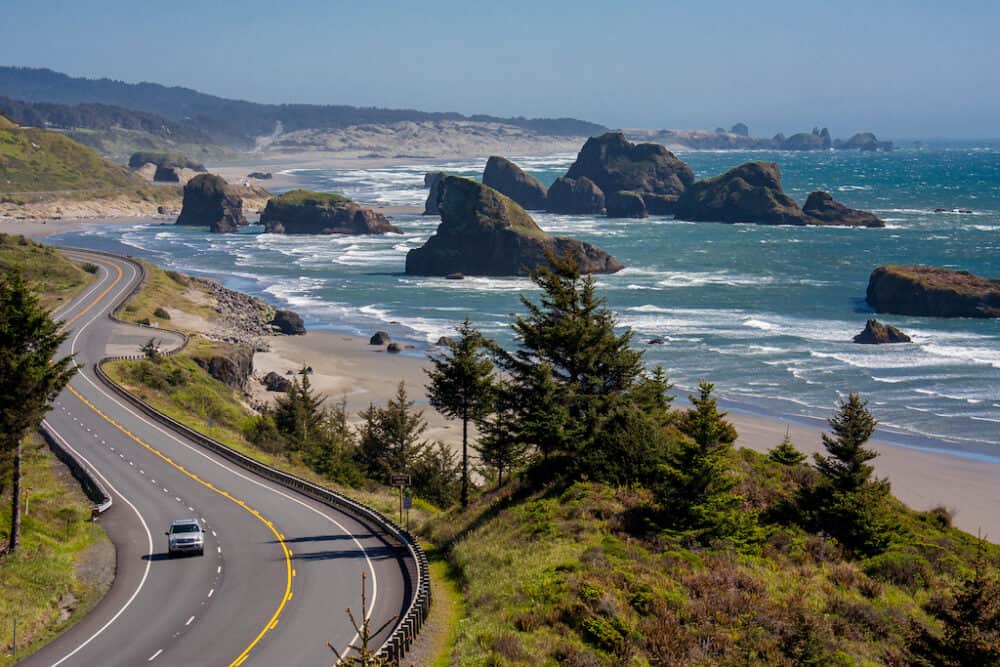 This is easily the best place to visit in the beautiful state, The Oregon Coast is a long stretch of coastline along the Pacific Ocean which is simply stunning! The 363-mile stretch is said to be one of the most scenic highways in the world and the innumerable beautiful beaches to stop by make the drive totally worth it.

The Highway 101 winds down the entirety of the Oregon Coast and it starts with the Columbia River to the end of the California border. The coast is divided into three regions: North Oregon Coast, Tillamook County, and Lincoln County.

The highway also moves along the breath-taking forests of the Oswald West State Park, which is named after the Oregon Governor who secured Oregon’s stellar beaches for the use of the public. There are many very beautiful places to stop along here but my highlights include Seal Rock, Cape Kiwanda, Ecola State Park, and Astoria. I would also advise staying overnight at one of the many pretty coastal communities to really make the most of the unique and wonderful atmosphere! 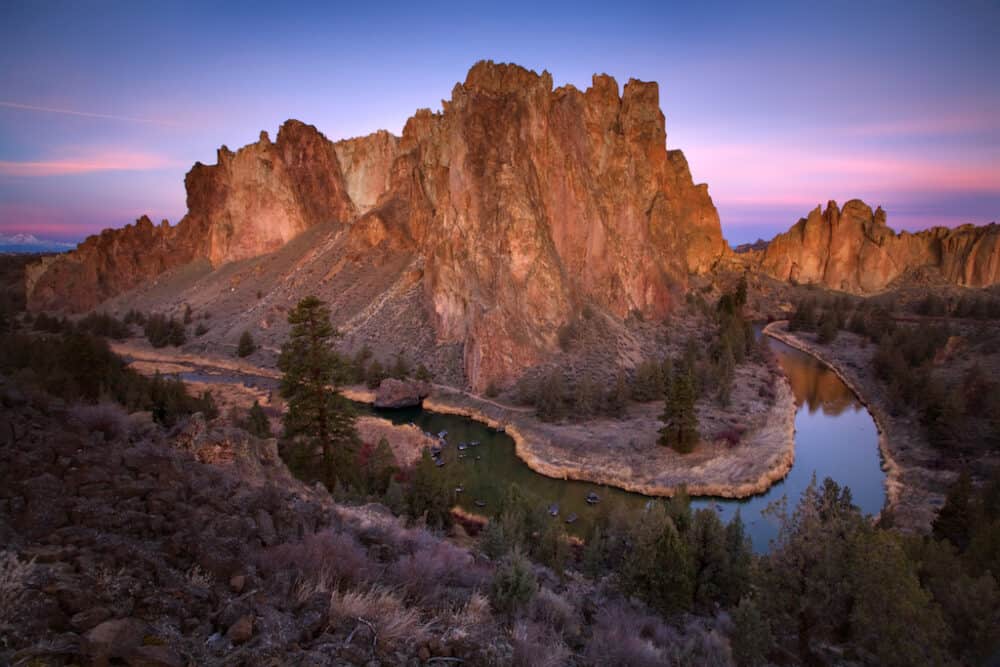 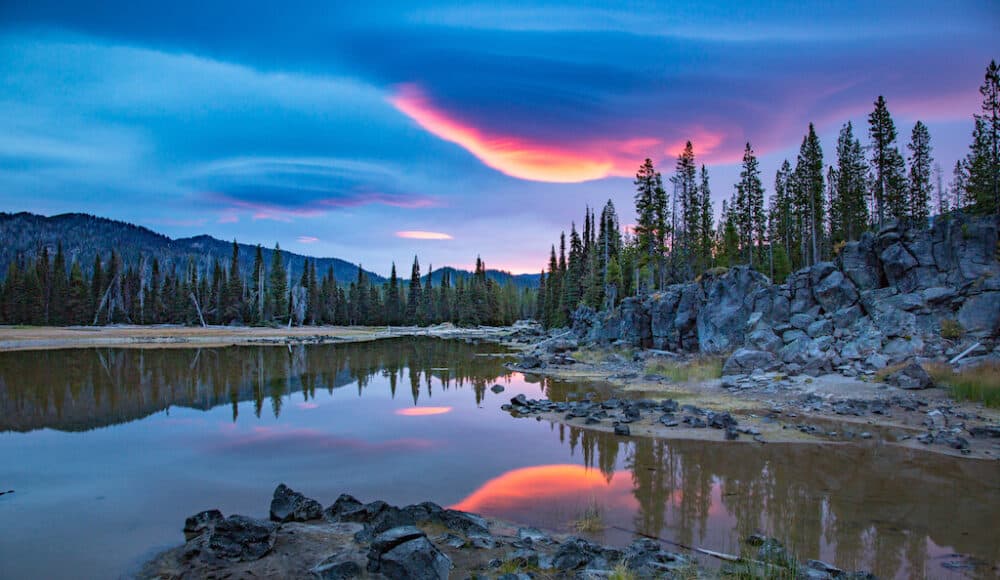 Bend is a city nestled on the banks of the Deschutes River in the state of Oregon. The city itself is pleasant but it’s the surroundings that make this one of the best places to visit in Oregon.  The west of the city has the gorgeous lakes and peaks of the majestic Cascade Mountains.

With a mountain range, the possibilities of winter sports are super high because there are scores of ski-resorts multi-use trails around this small city. Towards the south side of the city is the High Desert Museum which exhibits the local environment and other interesting facts about the area. To top it all, there is the Newberry National Volcanic Monument that will lead to the longest and most famous lava tube in Oregon. Bend is definitely one city you shouldn’t miss in this beautiful state!

Hotels and Airbnbs in Bend, Oregon 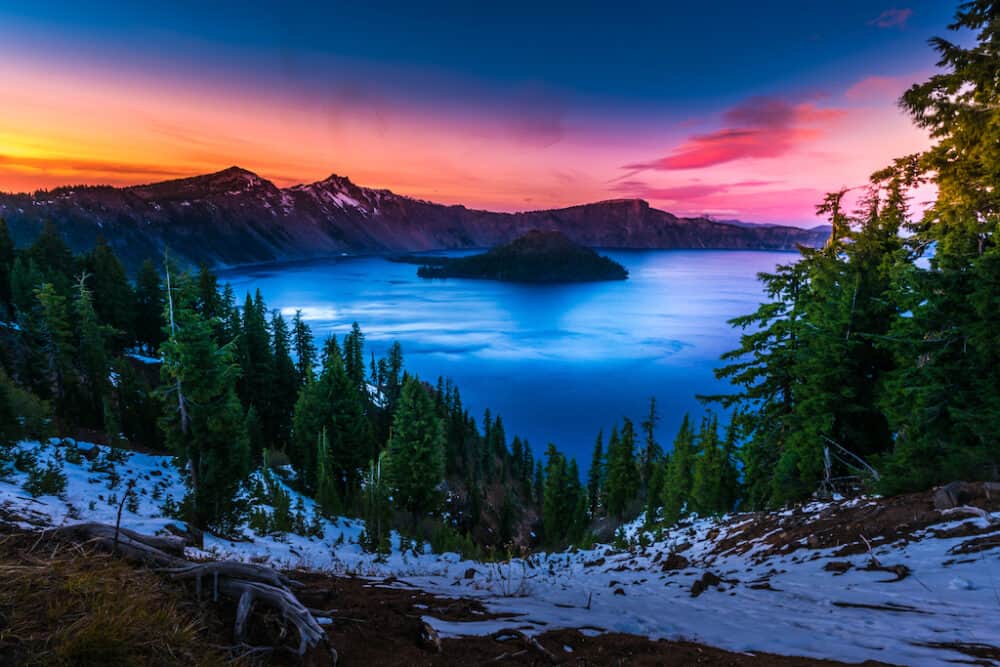 The Crater Lake National Park should always feature on a list of the most stunning places to explore in Oregon. It is located in the south-central region of the Oregon state and the main attraction of this National Park is the lake right in the midst of it.

The lake is famous for its crystal blue color and water clarity and is truly beautiful. The lake is said to have formed due to the collapse of the volcano Mount Mazama. The water is preserved only due to natural weather conditions like rain and snow and no water bodies flow into or out of the lake, so it’s really quite a sight to behold! 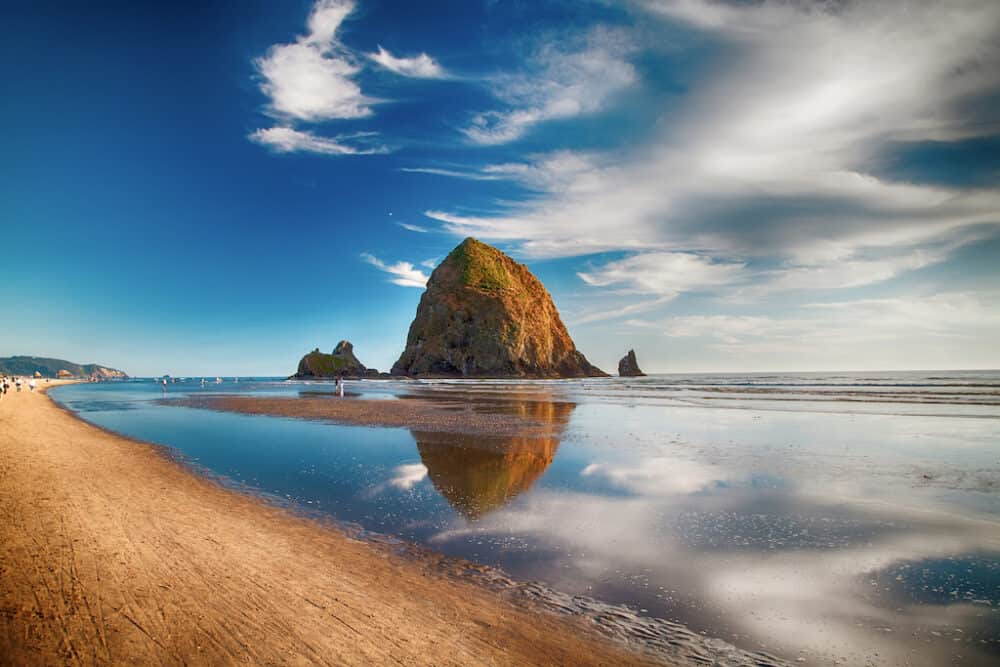 It isn’t really a secret that Oregon is the place to visit for really beautiful beaches and Cannon Beach is definitely one of the best. It’s a tiny coastal city located in the northwest region of the state and the beach in the city is known for its lengthy and sandy shore as well as the towering Haystack Rock, which is often hailed as one of the top-rated tourist attractions along the Oregon Coast.

Towards the north is the trail of the Ecola State Park which offers a truly wonderful view of the beautiful beach. Towards the south is Arcadia Beach which has some tide pools and picnic areas which is a great place to spend time with the family.

Hotels and Airbnbs in Cannon Beach 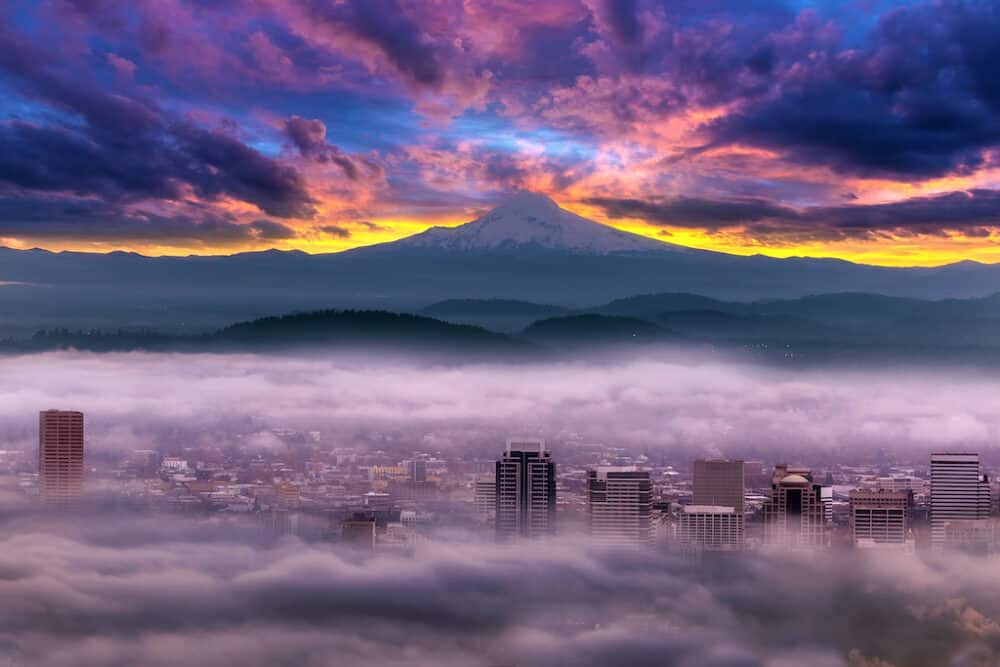 I loved Portland! Portland is the state’s largest city and is placed on the Columbia and Willamette Rivers and not to forget the majestic Mount Hood. Portland is known for its hipster and liberal culture to it and is said to be the most eco-friendly cities in the USA. This isn’t really surprising though seeing as though it’s located in one of the most scenic states in the USA.

Since the beginning of the 1960s, Portland has been known for its ever-growing politically progressive views but it’s also a great place for independent shops, cafes, and restaurants and festivals mostly eco-friendly of course!

Hotels and Airbnbs in Portland 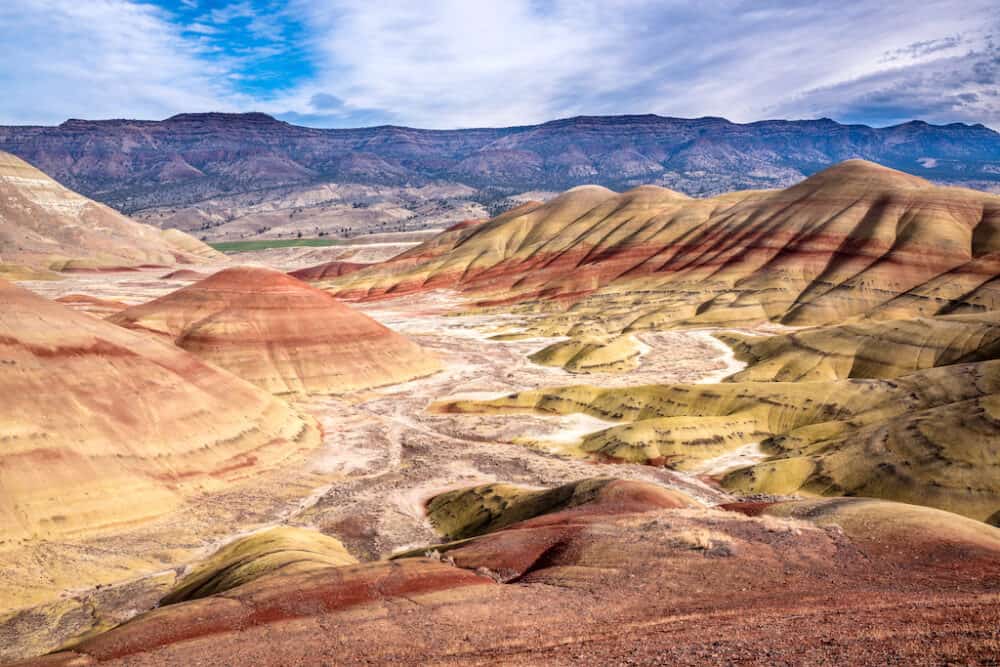 Next on our most beautiful places to visit in Oregon list is the U.S National Monument in the Wheeler and Grant counties in east-central Oregon. The park is famous for it’s preserved fossils plants and mammals which are said to have lived millions of years ago. The historical importance of this park is what draws all the history buffs. This 13000 plus acres of National Park covers semi-desert shrublands, riparian zones, and colorful badlands. 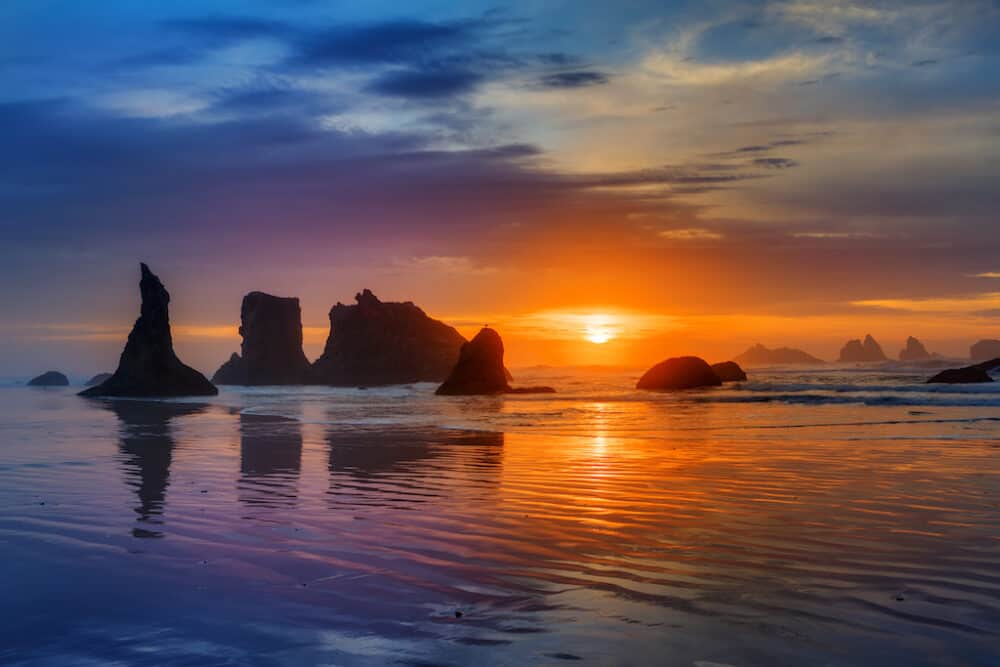 Bandon is a coastal city located in the Coos County of Oregon state. The beautiful scenery from the Bandon beach will pop up first when you hit the button on many an Oregon Google search.

This is where Coquille River meets the beautiful Pacific Ocean and the city is also popular for its stellar golf courses at the Bandon Dunes Golf Resort. Another must-see spot in this gorgeous area is the pretty historic lighthouse situated at the main beach.

Hotels and Airbnbs in Bandon Beach 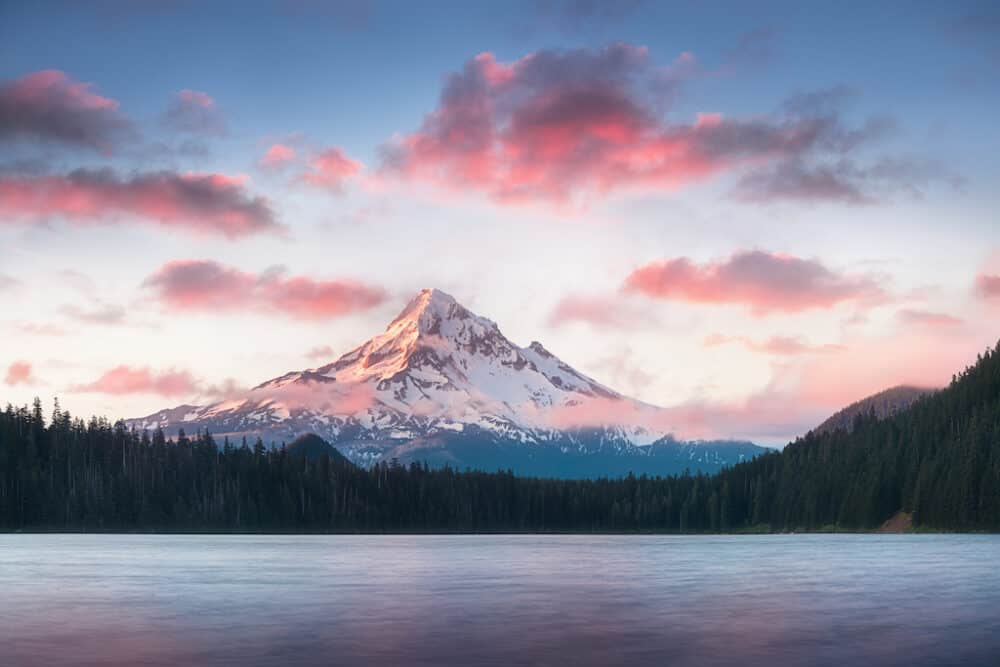 The highest and most iconic mountain in the state of Oregon is truly breathtaking and can be seen from miles and miles. Mount Hood is a potentially active stratovolcano in the Cascade Volcanic Arc.

It’s also the only mountain that offers year-round lift-served skiing in North America. Other popular activities in this beautiful spot include whitewater rafting, kayaking, skydiving, bird watching, hiking, and biking.

Hotels and Airbnbs in Mount Hood 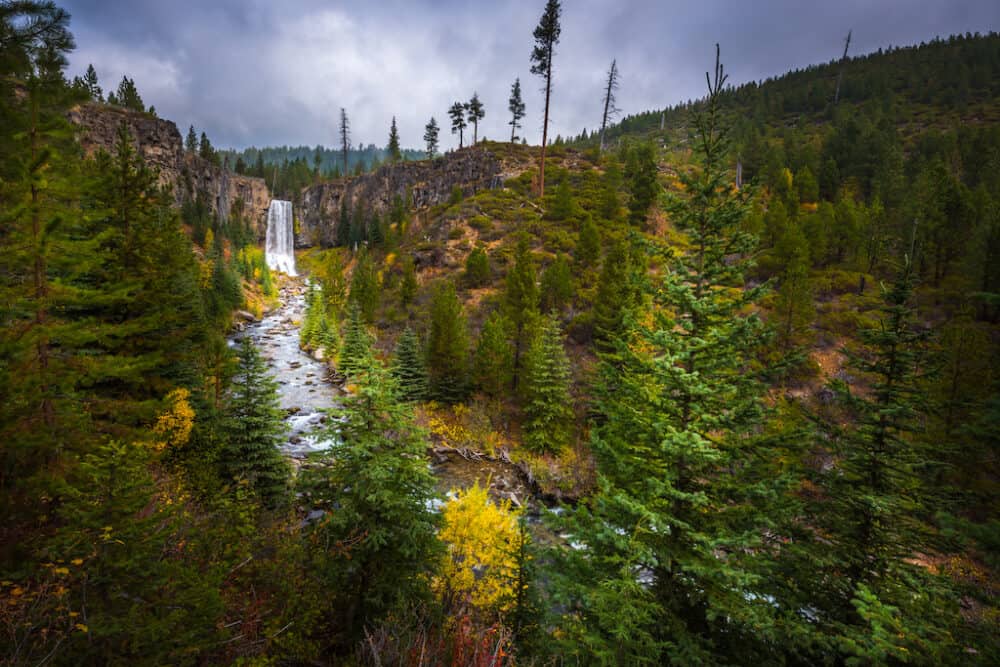 Another gorgeous place to go in Oregon, the Tumalo Falls is a wonderful 97-foot waterfall located on Tumalo Creek, in the Cascade Range in the state of Oregon. The waterfalls come under the Deschutes National Forest which is the home to Mount Bachelor, a stratovolcano.

The National Forest is popular for recreational activities like hiking and has several mountain trails to choose from. Mountain biking is another popular sport and people travel to Oregon from all over the USA just to try the incredible trails here. 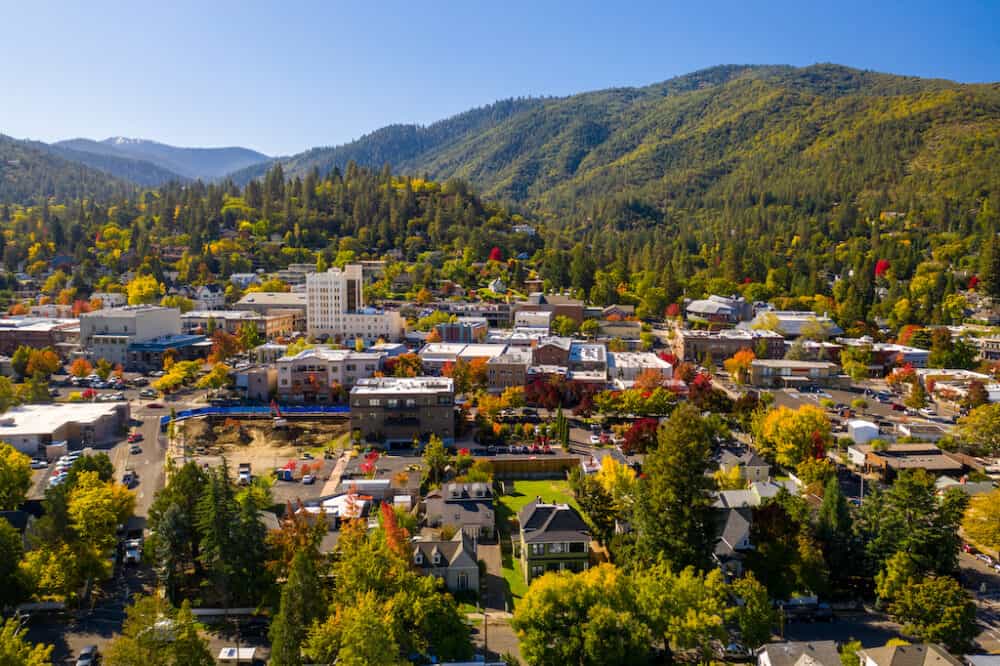 I loved this place in Oregon too, the city of Ashland is located in the southern part of Oregon State. It was once named “The 100 Best Small Art Towns in America” so expect a charming cultural hot spot dotted with award-winning galleries, theaters, and restaurants.

It’s also popular for the Oregon Shakespeare Festival which is a repertory theatre founded in 1935. The southwest of downtown Ashland is the beautiful Lithia Park and the right time to visit would be the fall season. To the northeast of the city is the North Mountain Park which has a nature center and multiple themed gardens worth visiting too.

Hotels and Airbnbs in Ashland 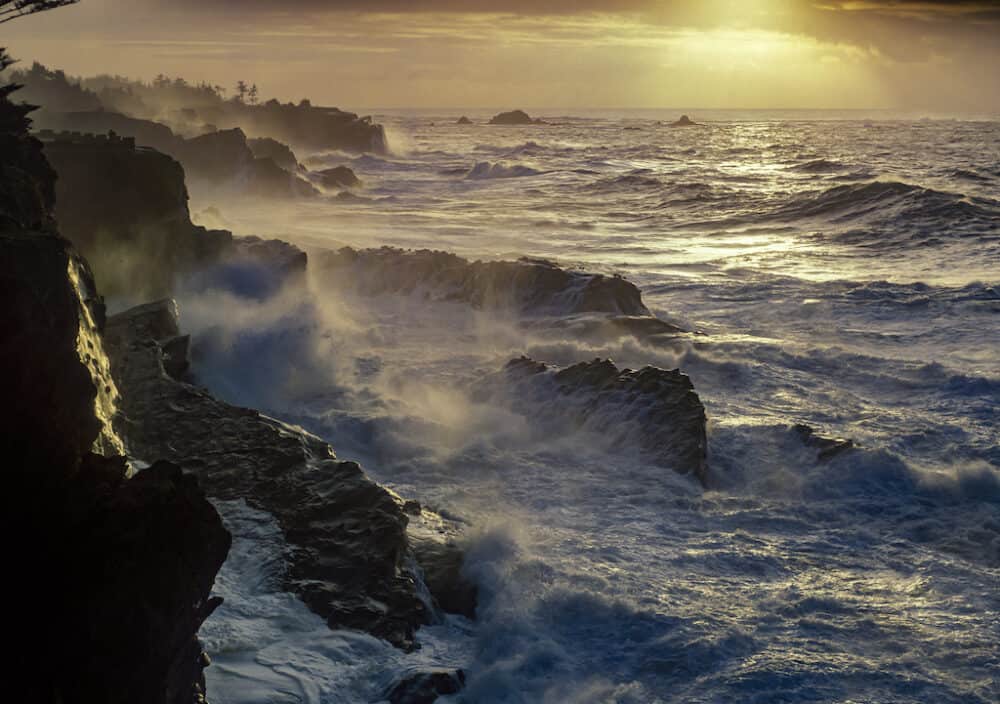 Tucked right above on a scenic bluff facing the Pacific Ocean, the Shore Acres State Park is a truly jaw-dropping beauty spot you shouldn’t miss while you visit Oregon. What began as a private estate with sprawling gardens purchased from several parts of the world (by shipbuilder adn curator Louis J.Simpson) has turned out to be a favorite Oregon beauty spot amongst nature and beach lovers alike.

With hiking trails along the coast, the State Park also offers its visitors the chance of relaxing picnic tables and several tide pools. Easily one of the best places to stop and explore in wonderful Oregon. 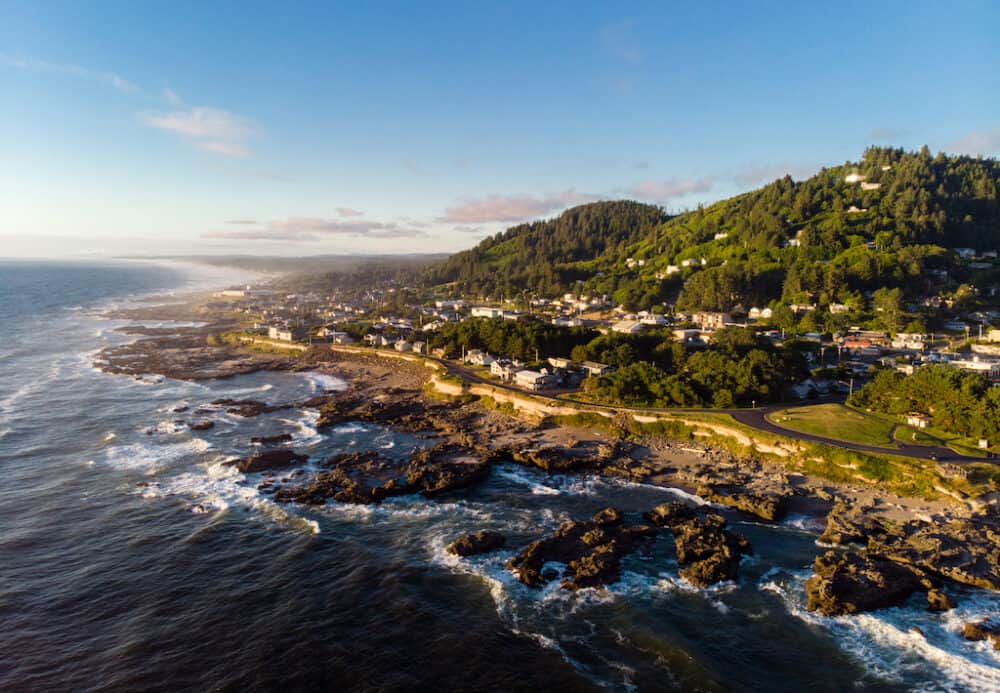 This charming town situated in the Lincoln county of Oregon is named from the Siletz language and has the meaning ‘dark water at the foot of the mountain’. It is also nicknamed as the ‘Home of the World’s Largest Ocean’ and it’s been named as the ‘Top 10 coolest small towns of the U.S.A’ (by Budget Magazine) so yes definitely deserves a place on this list!

The ocean side community makes a lovely place to visit and stop in Oregon if you want a peaceful retreat, to explore the great outdoors, have a little bit of family time, or even a romantic getaway for two!

Hotels and Airbnbs in Yachats 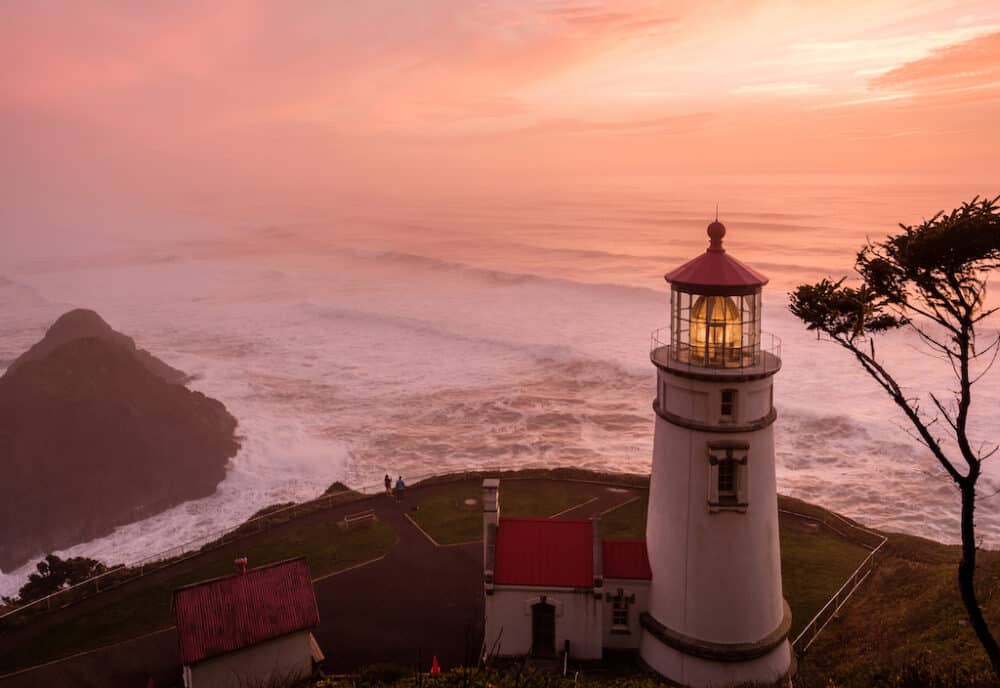 This stunning lighthouse is situated on the Oregon Coast 13 miles north from Florence and 13 miles south of the Yachats small town. The lighthouse viewpoint is part of a state park and is midway up to a whopping 205-foot-tall headland. A lovely aspect is that the lighthouse keeper’s house is accessible to tourists as a bed-and-breakfast inn! Yes, I’m sure you can imagine the incredible sea views from this point! 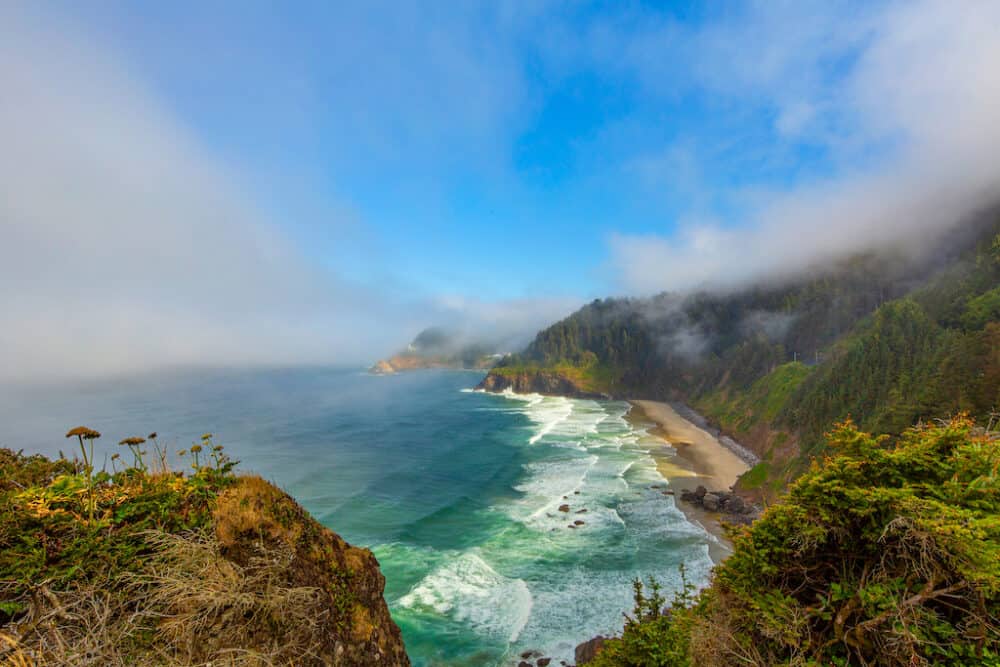 This is another pretty small town to visit in Oregon which is located at the mouth of the Siuslaw River. It is home to the expansive and vast Sea Lion Caves, which are home to a lively sea lion colony. The trails from the restored Heceta Head Lighthouse offer the view to seabirds and migrating whales. The historic Old Town district offers several awesome shopping options too so everything combined makes it a great attraction to explore in Oregon.

Hotels and Airbnbs in Florence

Siltcoos Lake – a beautiful and tranquil place to explore in Oregon 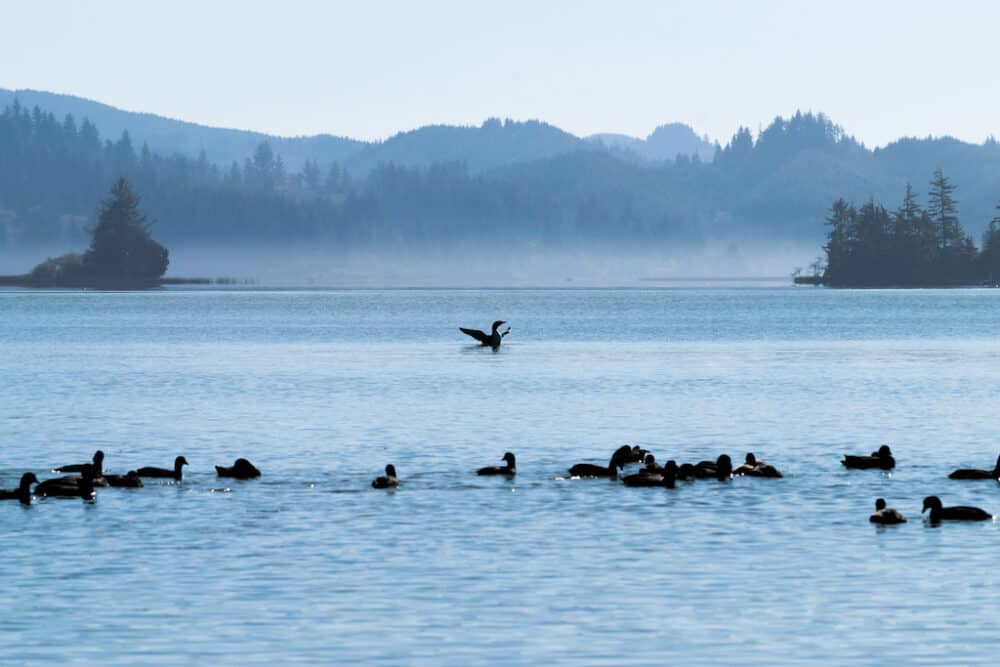 This is the largest lake on the Oregon Coast and is a whopping 3,164 acre in size. The beautiful lake empties out on to the main Siltcoos River and there is a dam located at the downriver too. The lake is a popular destination for fishing and is considered as the home of several warm-water species.

Other popular activities include kayaking, boating, hiking, and the start of the Siltcoos River Canoe Trail. Camping options are also open to people who would like to also stay in this beautiful area in Oregon.

Hotels and Airbnbs in Siltcoos Lake

The best places to visit in London for travel snobs 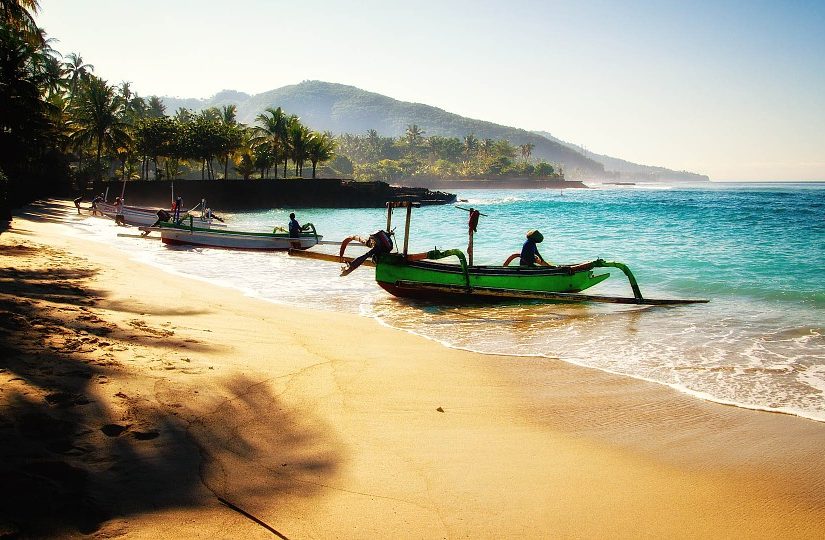 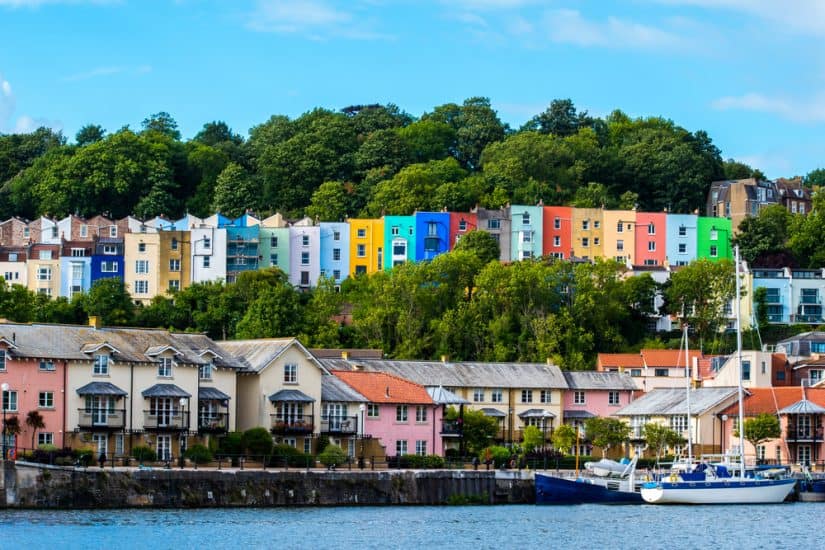 Top 15 of the most beautiful places to visit in Bristol 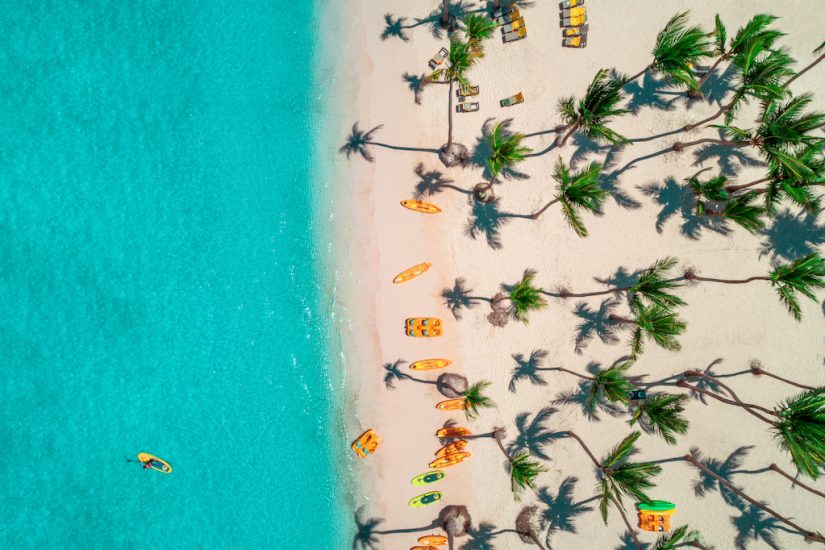 Top 15 of the world’s most beautiful travel destinations