Having lived, worked, and traveled in Guatemala for nearly five months, I was pleasantly surprised how much there is to do in a small country I barely knew about just a month prior to my arrival. From majestic volcanoes and enchanting caves, to ancient ruins and yoga retreats, Guatemala holds adventures and relaxation for nearly any traveler. Here’s what I think you should add to your itinerary… This is a very cool thing to do in Guatemala! The country is home to 33 Volcanos several of which are active at any given time. Currently, Santiaguito billows smoke on an almost daily basis. The country is also the place for the 4 highest points in Central America, the tallest of which being Tajumulco standing a towering 4220m above the rest.

From Guatemala City, Antigua, Quetaltenago (Xela), and a number of other locations you can connect yourself with various guide companies for one day or a multi-day trip to scale the majority of these peaks. If you’re intrepid enough, a number of the volcanos can also be done independently, just be sure to ask around for directions and safety advice. Quetazltrekkers is one organization that’s often highly rated for its fan atmosphere and the fact that all their proceeds go to help Guatemalan school children. With several hundred language schools at some of the lowest prices in all of Latin America, Guatemala is often dubbed one of the best places to learn Spanish. Guatemalan’s tend to speak little to no English as well as speaking their native language more slowly and deliberately than many countries further to the south. You’ll also find prices to be far more favourable than many other countries as you can get a week’s worth of lessons with a quality teach as well as accommodations and meals for less than $150 USD.

Though it’s a bit more expensive option, I highly recommend Proyecto Lingüístico Quetzalteco in Quetaltenago due to their high-quality teachers, variety of activities, and local community involvement. ¡Yo hablo mucho Español ahora!

Get wet and go wild Ok, so not really a cultural activity and maybe something you could do at home, but the Xocomil waterpark in Retalhuleu is a fantastic way to spend a day escaping the heat. This inexpensive park is set in jungle so lush it can sometimes be hard to see from one ride to the next.

The park also lays claim to a looping slide from Aqualoop. After getting into what looks like a cryogenic chamber you rocket through this partially inverted slide at 60 km/h and up to 2.5Gs.

Spice it up or slow it down at Lake Atitlan Lago de Atitlan is the largest lake in western Guatemala and has over 10 towns of varying sizes and of every flavour you could want. The lake as actually a bowl created by the surrounding volcanos and mountains with no outflowing river.

Want to get your party on, go for a hike, and (maybe) try to learn some Spanish? Head to San Pedro where you’ll find a variety of bars and nearly anything else you could ask for. Feeling in more of a spiritual mood, then San Marcos might be more your speed. There you’ll find yoga, meditation, and guidance to help keep you centered. If you’d rather just get away from it all you can head over to Santa Cruz where you’ll find far fewer gringos. Antigua is one of the tourism centers of Guatemala and with good reason. The main part of town has over 42 blocks of beautiful colonial buildings centered on a vibrant and busy town square. Due to the number of earthquakes experienced over the years it’s also possible to visit and explore many of the old colonial churches which now lie in ruins.

The number of visitors both foreign and domestic have also led the cobblestone lined streets to having some of the most delicious and international cuisine in all of Guatemala. Though only a fraction of the world’s cacao is grown in Guatemala, it is host to a number of classes on making chocolate from scratch. In the colonial town of Antigua you’ll find the highly polished workshop of the Choco Museo where they introduce you to the history of the bean, take you through the process of making several teas, and send you home with chocolates of your own design.

If you’d rather something a little more authentic you can visit Utopia Eco Hotel in Semuc Champey where John, a Guatemalan born American will lead you through a cacao farm before making your own chocolates straight from the bean. Eat them fast though as they aren’t tempered and melt quickly in the heat, not that you would let them go to waste anyway. In many commercial caving adventures you’ll find yourself outfitted with a wetsuit and headlamp, in Semuc Champey however, this is not the case. In order to navigate the caves in this beautiful oasis you’ll need to make sure you can keep your candle lit as you walk, and occasionally swim in an amongst the stalactites. The eerie light and reflections created by a dozen or two of your fellow travelers’ candles makes this one of the most unique caving experience you’ll find in Guatemala or elsewhere. Between Tikal and El Mirador, Guatemala contains a few of the largest pyramids found in the Mayan world, some as much as 70m tall. The site of Tikal is staggering in size with more than 7000 structures, to date, only a fraction have been excavated or restored due to UNESCO world heritage preservation rules.

While Tikal can be visited in a day from the nearby beautiful island town of Flores, El Mirador is another story. To venture your way to El Mirador you’ll have to locate yourself a guide and trek deep within the Guatemalan jungle, its best to go during dry season as the trek can get very boggy. The treat, in this case, is the experience of getting on top of pyramids visited by very few people each year. You can also get your nerd on at Tikal as it was featured in one of the Starwars movies. Taking a ride in one of Central America’s infamous forms of transportation should not be missed. The busses of Guatemala are of particular interest over those further south due to the gregarious colours and chrome they adorn them with.

A ride in one of these curve-hugging speed demons is not for the faint of heart, however. In addition to getting your heart racing you’re likely to become very, very close with your seatmates as the driver stops to pick up every possible person until the seats are full, the aisles are full, and at least three people are handing out of the front door. You might even end up with a child sleeping on your lap or maybe you can talk the ayudante (driver’s helper) into letting you sit on the roof.

Riding a chicken bus can also be an opportunity to get closer to the people, talk with them, and learn their culture. Oh and you’re probably wondering, yes, I‘ve seen chickens on the chicken buses. Due to ethnic cleansing earlier in the 1900’s in other countries in Central America, Guatemala is sadly one of the few places you can still see a lot of weaving done in a traditional manner. Even in the larger cities the colourful fabrics and elaborate dress haven’t been abandoned by the Guatemalan women and children in favour of modern fashions.

Many of the crafts you find in neighbouring Honduras and elsewhere in the region are actually manufactured in Guatemala making it the best place to find yourself a handmade bag or scarf. If you’re intrepid and patient enough you can even visit one of the many co-operatives to set about making your own weaving with the help of the finely dressed native ladies.

5 of the most beautiful buildings in London 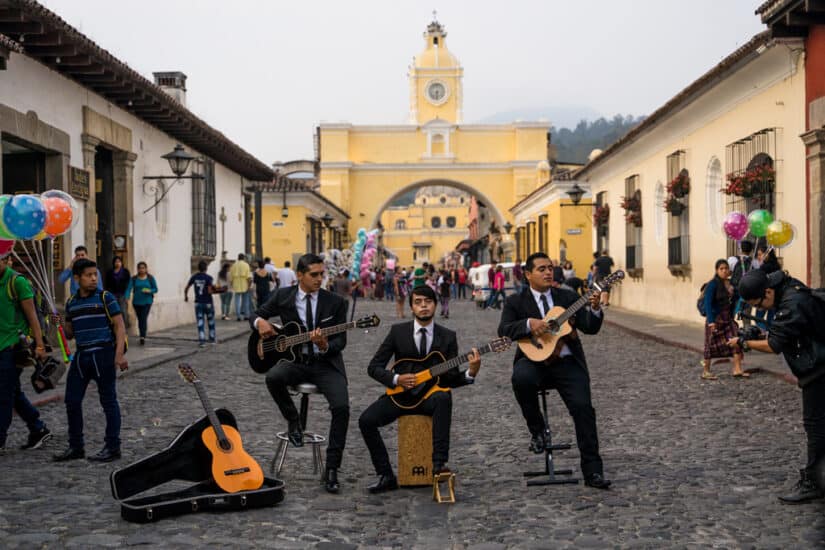 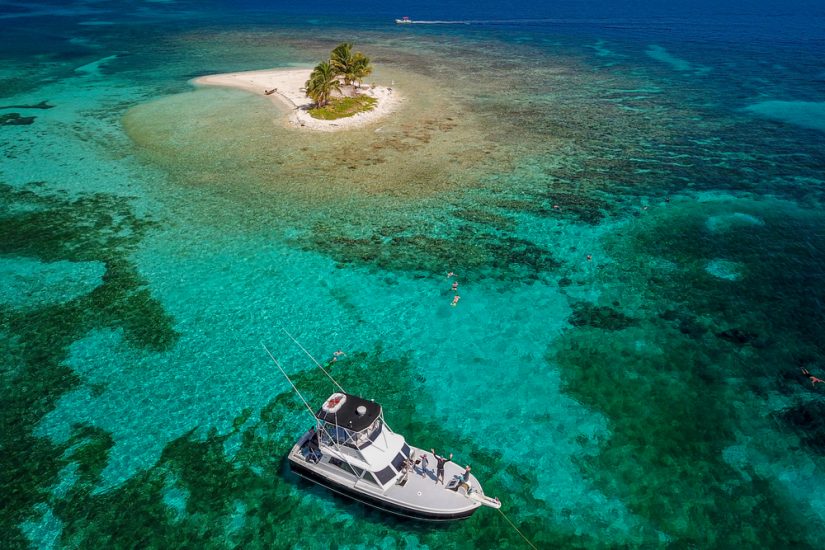 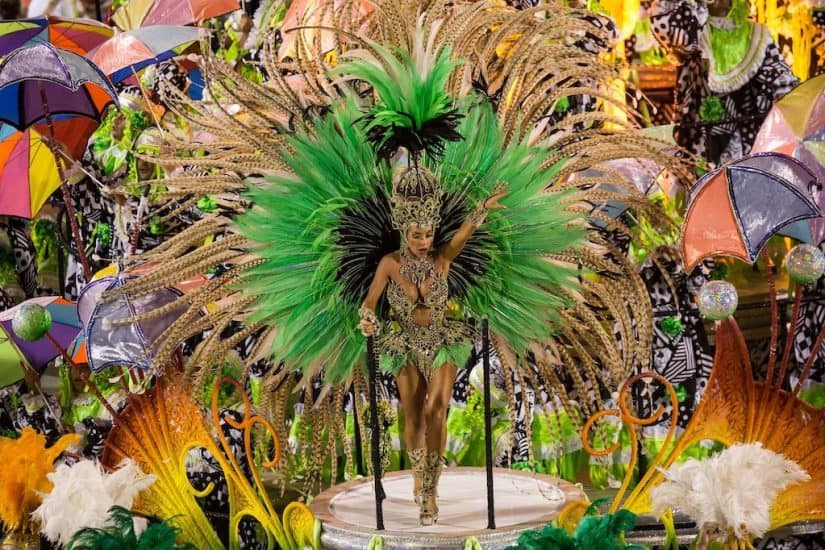