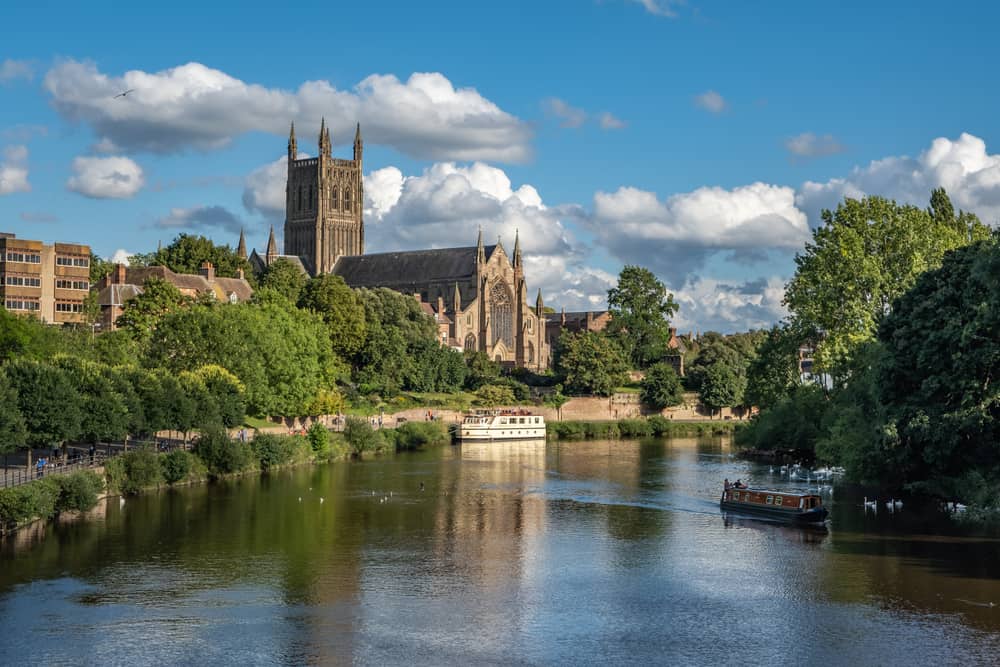 The West Midlands county famous for its tangy condiment (yep Worcestershire sauce really does hail from here), its historic monuments, its wonderful rolling hills, and its gorgeous Cotswolds village, and also its spring water makes a wonderful UK destination to visit, walk and explore.

From impressive cathedrals to an impressive heritage railway, here are the best and most beautiful places to visit in Worcestershire…

1. Worcester and Worcester Cathedral – two of the best places to visit in Worcestershire 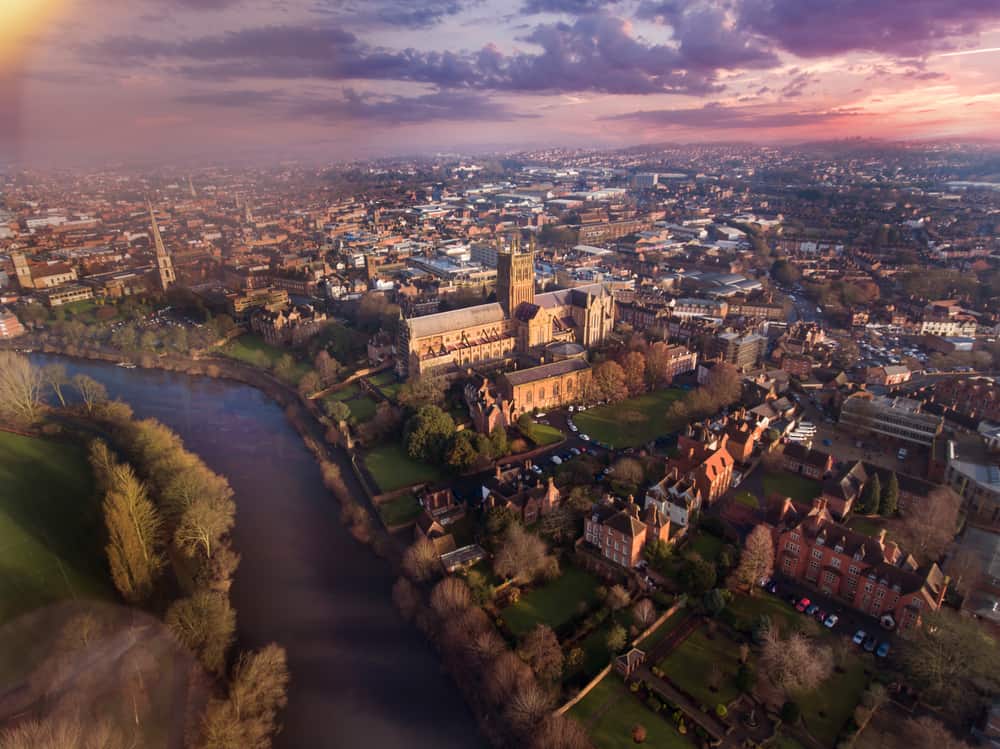 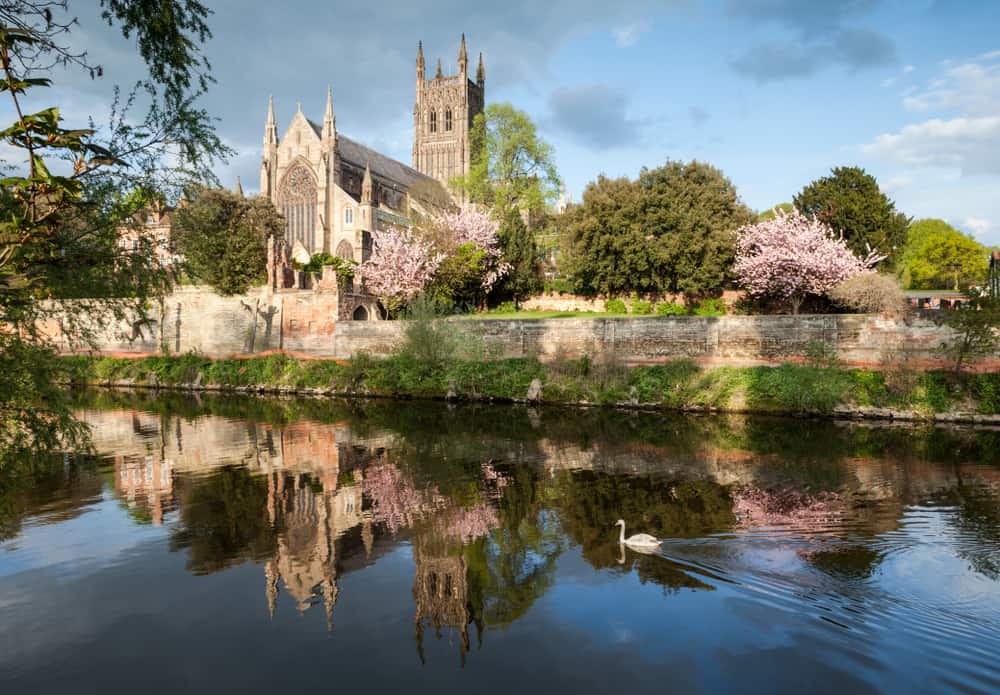 The beautiful historic town is famous for its Worcester Porcelain, Worcestershire Sauce, and for being home to the most picturesque cricket ground in the country.

Both places are scenically located on a bank that sits on the River Severn. The impressive cathedral is an Anglican cathedral built between 1084 and 1504, and one of the most interesting things about it is its many architectural styles, which include everything from Norman to Perpendicular Gothic.

Visit for the great list of events, independent boutiques, great restaurants and other attractions including the Norman crypt, the Transitional Gothic bays, the detailed woodwork, and the central tower. King John’s tomb is housed in the cathedral, and it is where the University of Worcester’s graduation ceremonies are held. 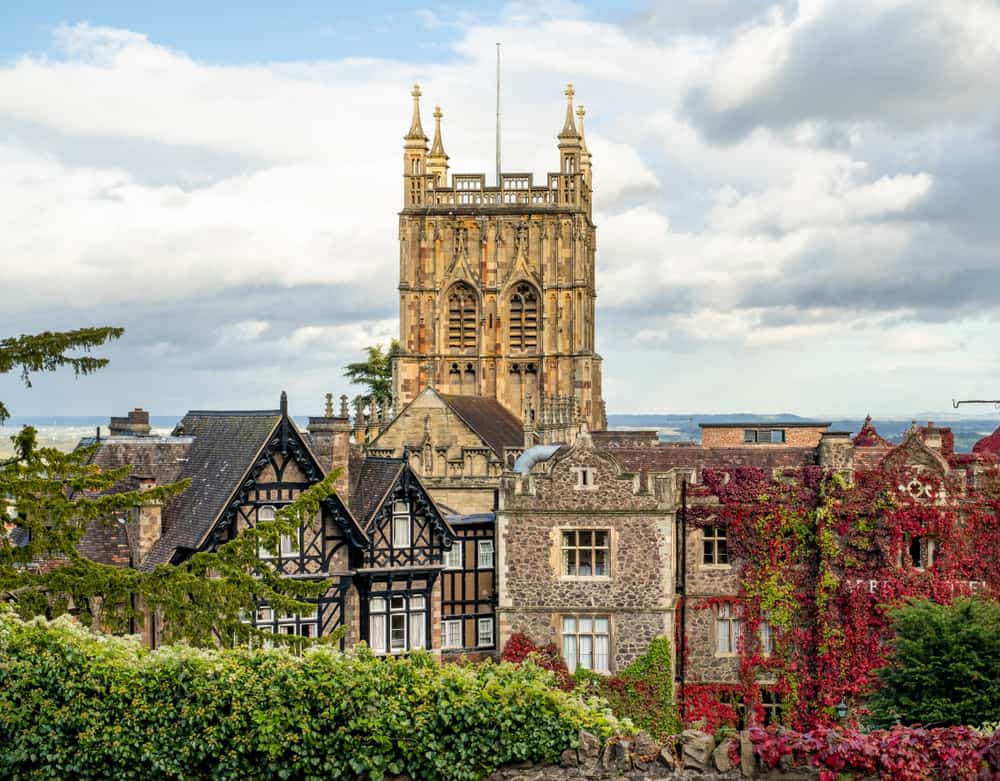 Malvern is a pretty historic spa town and civil parish that is home to roughly 30,000 people.

It is located roughly 120 miles from London and boasts villas and hotels of different architectural styles, a railway station, sculptures, theaters, fountains and statues, and its famous water, which can be found in numerous fountains and spouts and is said to have medicinal purposes, even though there is no scientific proof of this.

It is located in the valley down from Malvern Hills, leaving it with a beautiful look that is certain to pique your interest. 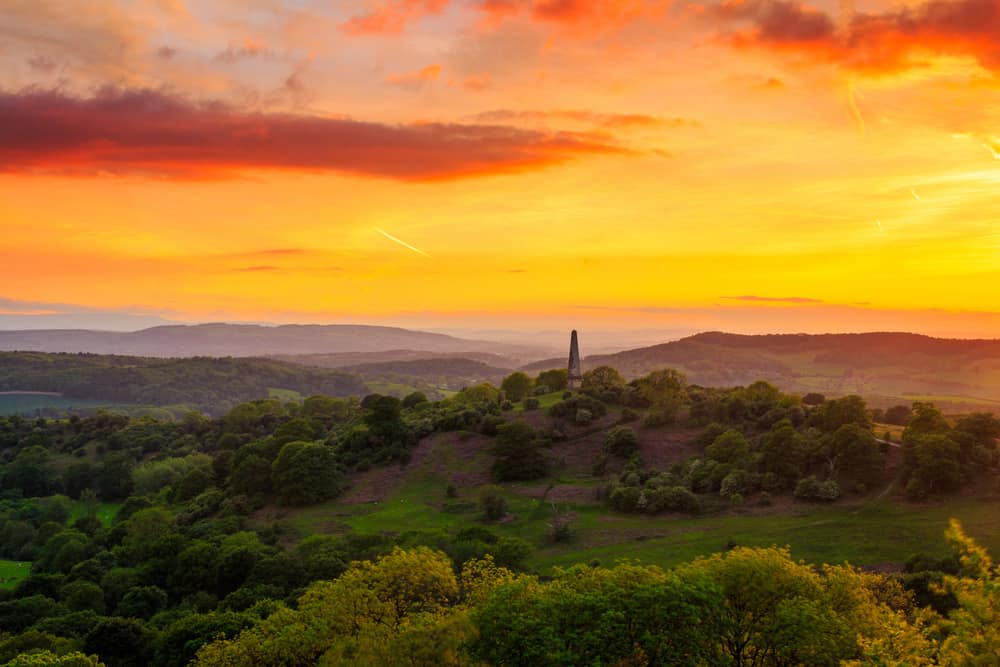 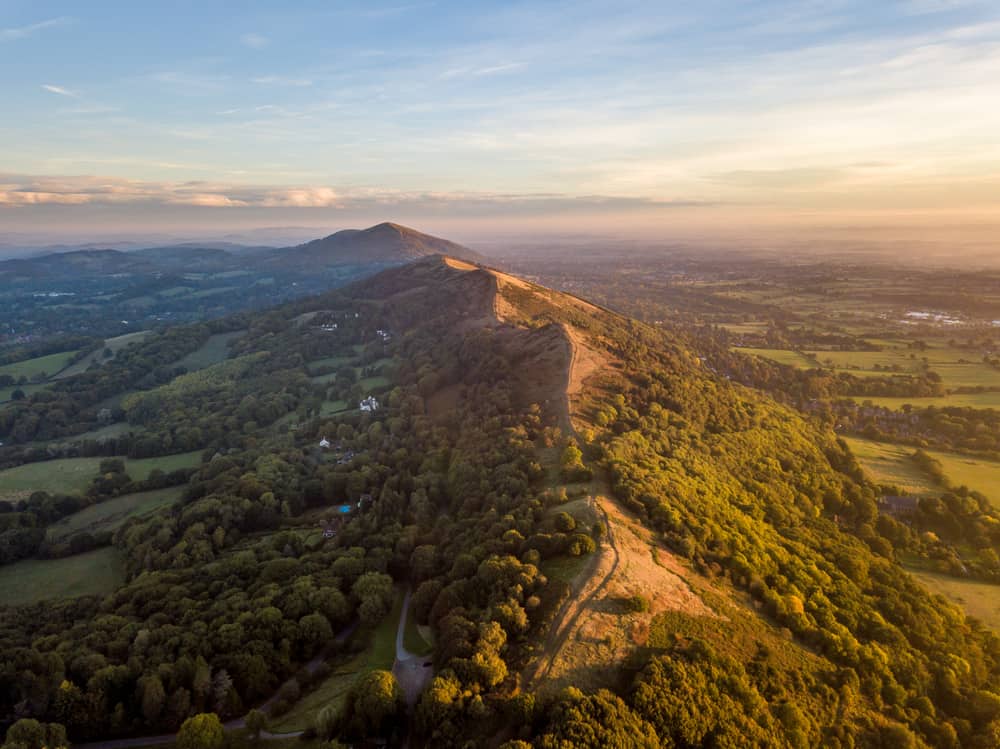 The Malvern hills are located in Worcestershire, Herefordshire, and part of Gloucestershire. If you get to the highest point in the hills, you can enjoy a clear view of the Severn Valley, as well as 13 different counties and various cathedrals.

It is a geological and biological site of special scientific interest (SSSI) and even has its own spring water, which they bottle and sell to the public.

It is now managed by the Malvern Hills Trust, and it offers a spectacular view regardless of where you stop while you’re there. 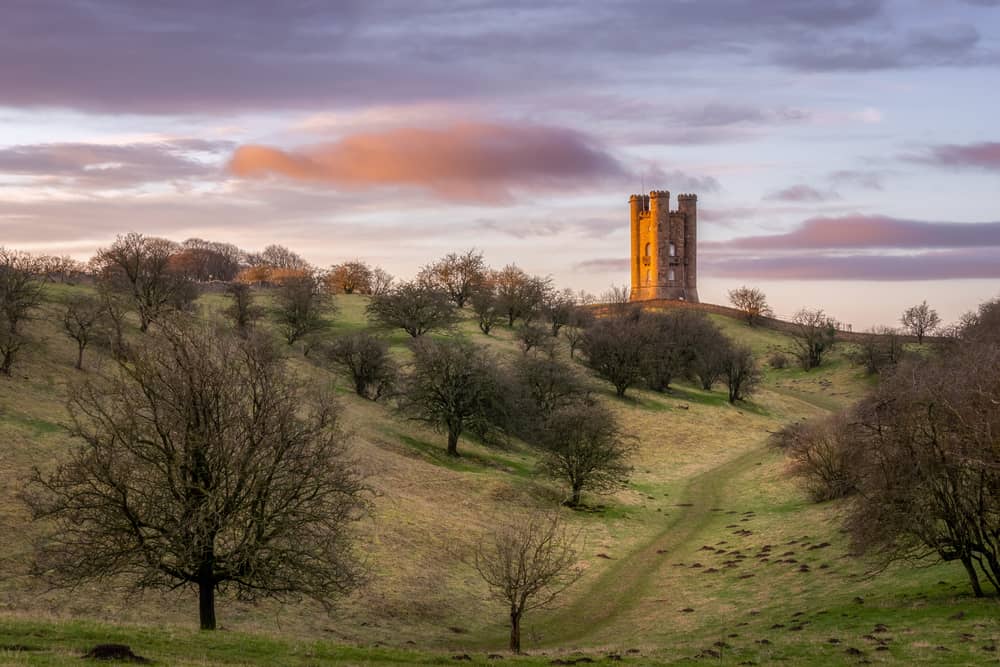 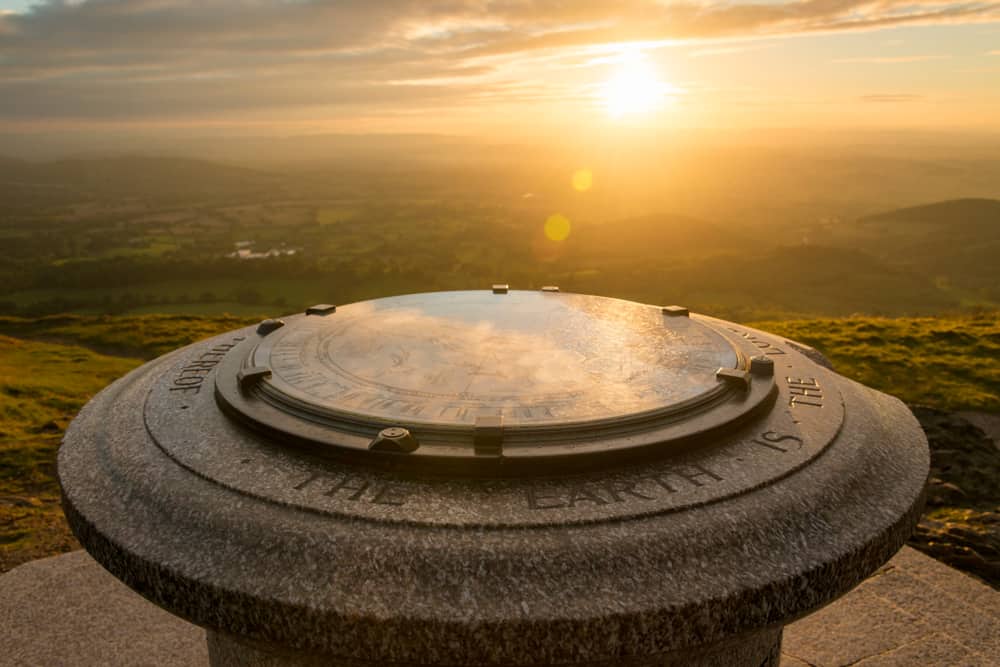 The striking Broadway Tower is a folly located in the large village of Broadway. Its base is 1024 feet above sea level and it stands a full 65 feet tall. In the past, the tower has served as a printing press and the home of a headmaster, among other things.

There is a war memorial near the tower and it also houses a gift shop and restaurant. It is built on Beacon Hill where beacons were always lit on special occasions.

It is a stately-looking building that is worth visiting, so you owe it to yourself to go there whenever you’re in the area.

5. Broadway – said to be the most beautiful Cotswold village

Broadway is a large village and civil parish with roughly 3,000 residents. Not only is it a very attractive village, but it’s also the place to be if you’re interested in arts and antiques.

There are numerous cottages, bed-and-breakfasts, restaurants, museums, and churches, and if you go down any of the main streets, you’ll probably be struck at how beautiful the place is!

The architecture and design of all of the shops are certain to catch your attention, so definitely pay a visit to this wonderful Worcestershire gem! 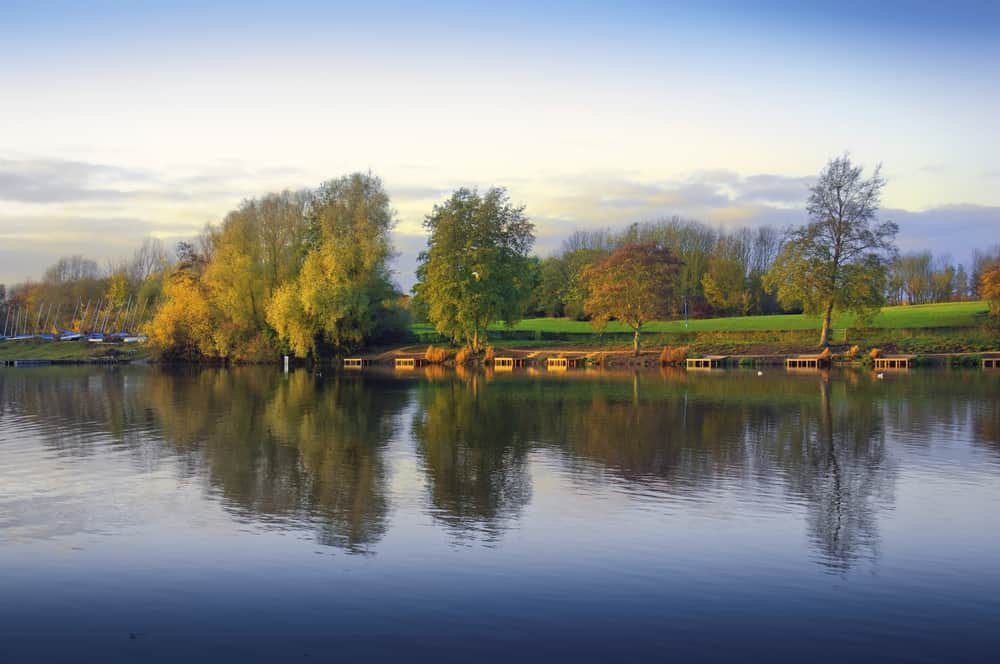 Also called Arrow Valley Park, this is one of the most beautiful places to visit in Worcestershire, in part because it is home to 900 acres of unspoilt natural beauty.

The 27-acre lake is popular for dinghy sailing and birdwatching and is home to the Redditch Sailing Club and the Youth Afloat initiative, which gives children who would otherwise not have it the opportunity to learn to sail.

Since 2000, there is a visitor center that is open most days, and the park has even won the Civic Trust Green Flag Award due to its commitment to the environment.

7. Bredon Hill – one of the most stunning places to explore in Worcestershire 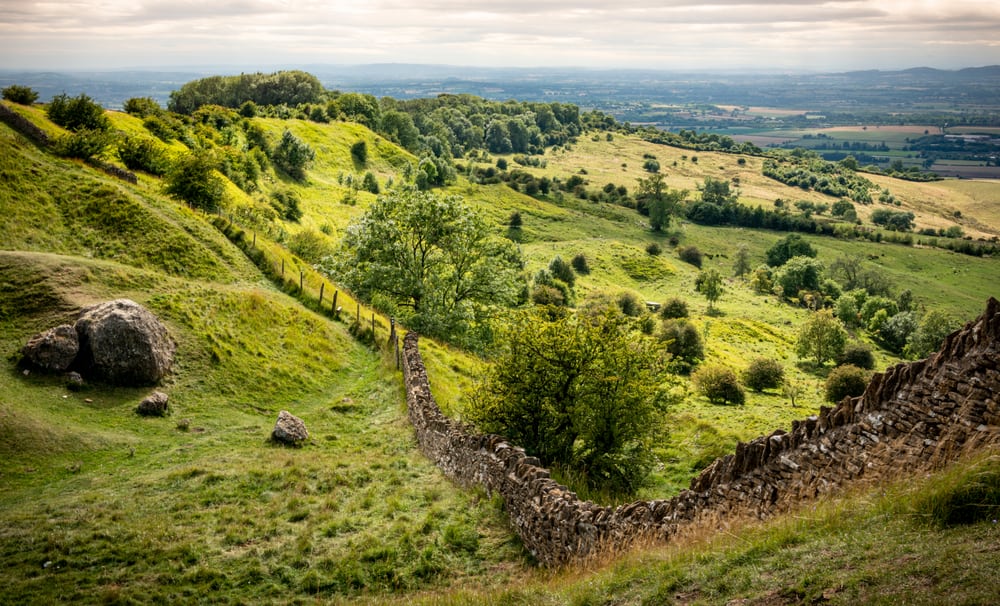 Beautiful Bredon Hill has a summit that extends over a total of eight parishes, making it a very impressive hill indeed. There is an 18th century stone folly adjacent to the summit, and the hill itself reaches roughly 1,000 feet high.

Arts and crafts are important in this area, thanks to the artists, craftspeople, and designers who have studios that are open to the public.

With lots of green grass and great views all around it, Bredon Hill is a place you’ll want to see whenever you’re in this area of Great Britain. It is simply too stunning to miss! 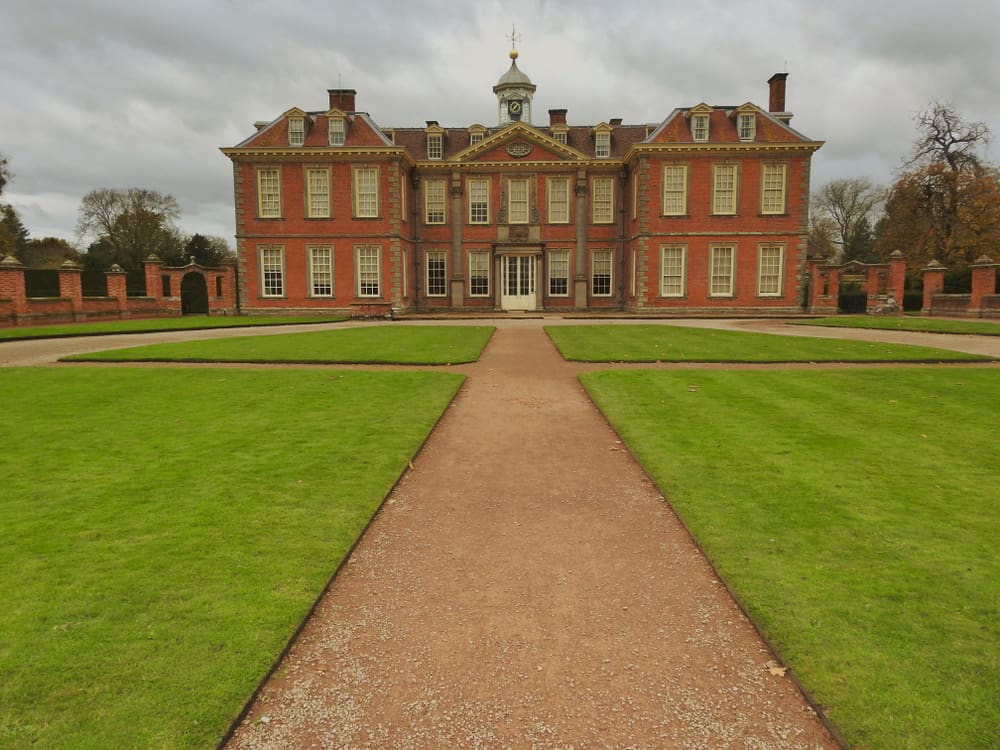 A large two-story home dating back to the 18th century, Hanbury Hall is built in the Queen Anne style and is constructed mostly of red brick. It is a Grade I listed building that includes an orangery and is open to the public.

One of the things that makes it so unique is that it is beautiful both on the outside and the inside, where you can enjoy beautiful art and ornate decorations that give the house so much of its beauty.

The orangery is located roughly 120 yards west of the hall, and there is a pavilion range about 30 yards away. 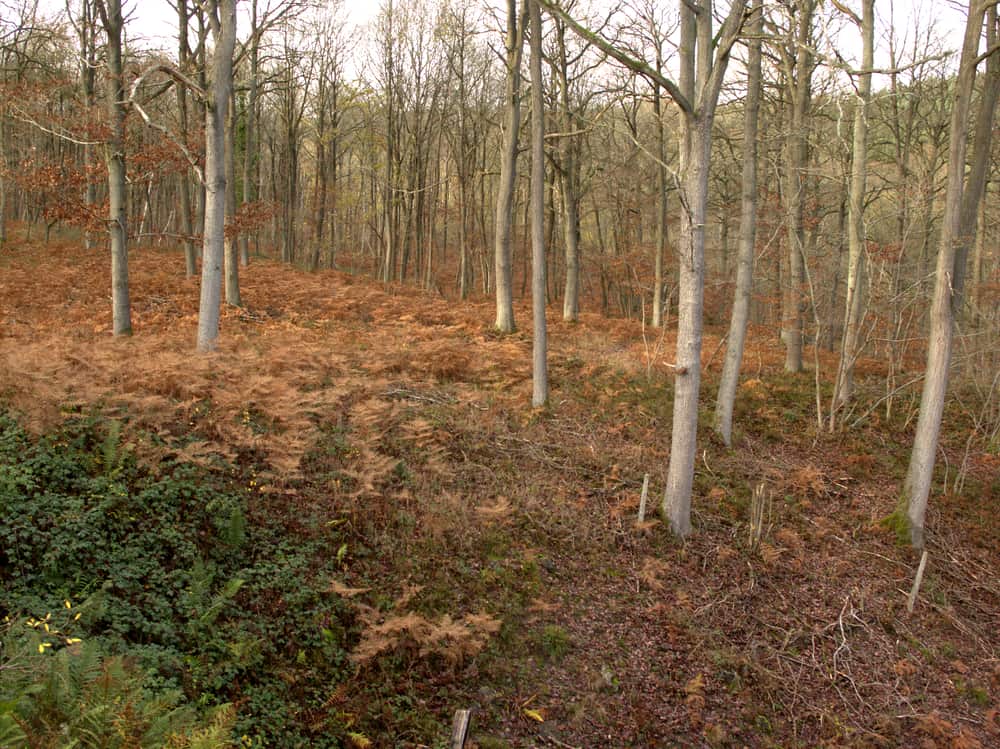 Wyre Fores is a large woodland and forest that takes up roughly 10 square miles. It is a semi-natural park, which means it is partially unmanaged, and it is known for its wonderful wildlife.

There, you can find birds such as common crossbills, wood warblers, hawfinches, and long-eared owls, among others, as well as many other woodland plants and animals.

Much of it has been deforested, but it still holds much to see, especially if you follow the manmade pathways and stay on the lookout for something unique. 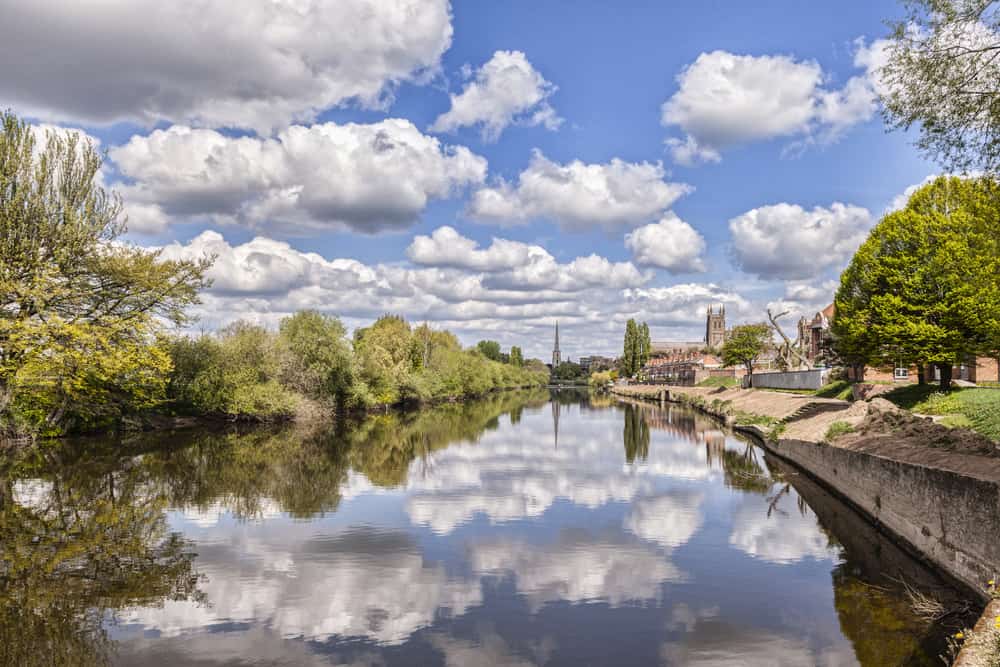 This is the longest river in Great Britain at 220 miles in length, and it even flows into Wales. Along the way, you can find numerous bridges, towns, and tributaries, and there is also a tunnel and a road bridge, not to mention a few footbridges.

There is also a nature reserve that is home to all sorts of migratory birds, and regardless of where you decide to stop and relax, you’re all but guaranteed to enjoy views that are absolutely stunning.

The river itself is also beautiful, rising once it enters Wales at the Cambrian Mountains, which are 2,100 feet above sea level.

11. Severn Valley Railway – one of the best attractions in Worcestershire 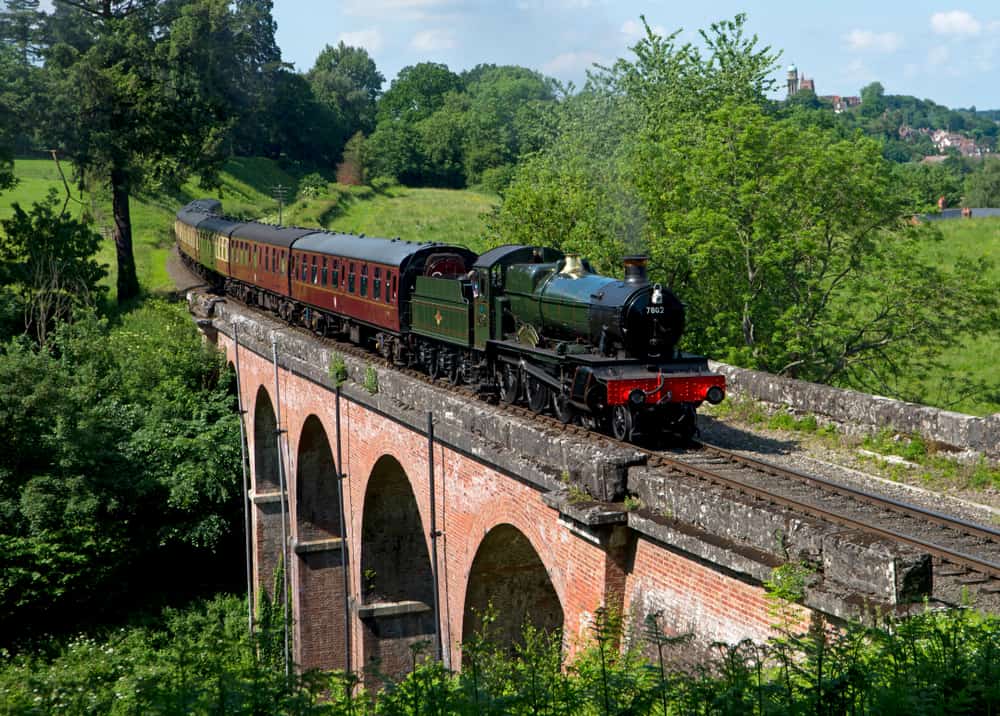 This is a gorgeous heritage railway that stretches from Bridgnorth to Kidderminster and is 16 miles long. On most days, the railway sees activity by both steam and diesel locomotives, and this is also the sixth-largest standard gauge heritage line in all of the United Kingdom.

It has been in operation since 1862, and it has a total of eight stations along its 16-mile route.

It is such a popular railway that it has been featured in numerous television shows and movies, including Candleshoe, The Thirty Nine Steps, The Chronicles of Narnia, Sherlock Holmes: A Game of Shadows, and Dancing on the Edge.

12. Kidderminster – a large market and historic town to visit in Worcestershire 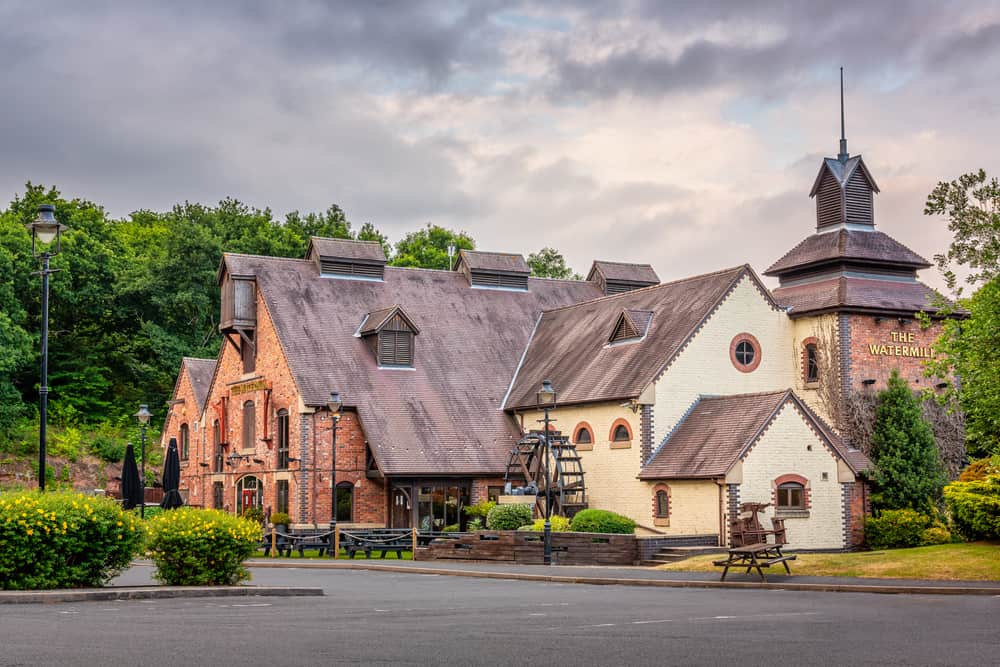 Kidderminster is a large easy-on-the-eye market and historic minster town located roughly 17 miles from Birmingham. The population is just under 60,000, and the pretty town features buildings displaying many different types of architecture.

These include churches such as St. Mary’s and All Saints, which is a Grade I listed building, St. John’s, which has been around since 1843, and many others.

There is also a 19th-century mansion called The Shrubbery, and even the Kidderminster Register Office. There are also mill buildings, railway stations, and sporting events such as cricket, rugby, football, and hockey games. 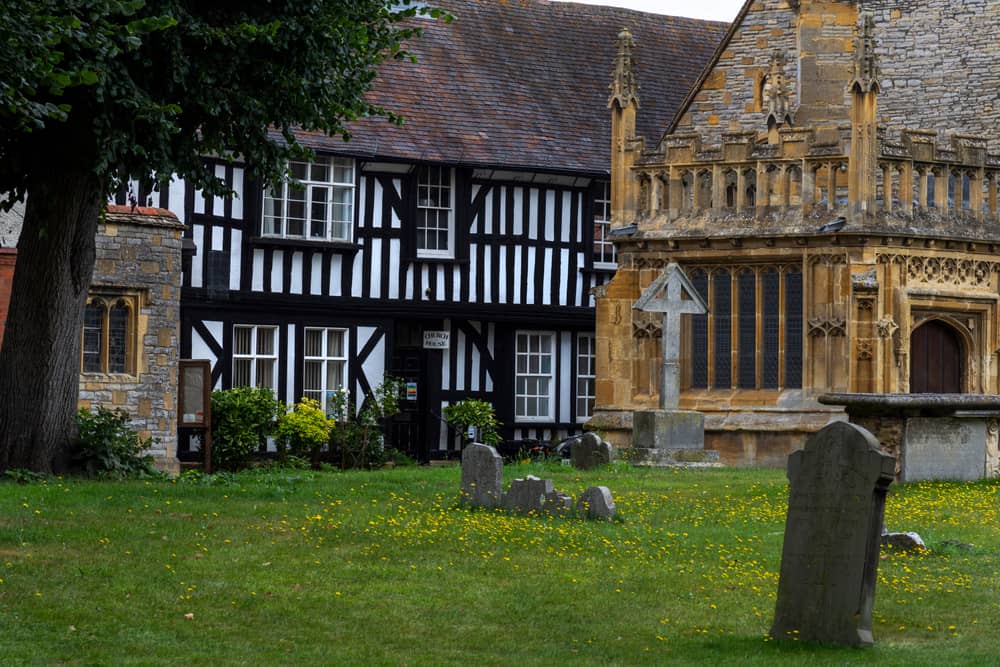 A market town with a population of about 25,000, picturesque Evesham is located on a horseshoe-shaped peninsula and is almost completely surrounded by water.

It was built around an abbey in the 8th century and the people there have a distinct dialect known as Asum Grammar.

There is a library, museum, and hospital, as well as a leisure center where you can swim, work out, or visit the beauty salon. There are also some notable celebrities who were either born in Evesham or had a home there at some point, including the 2012 and 2016 Olympic rower Alex Gregory. A charming place to visit in Worcestershire!

Kyre Park is a beautiful deer park that has medieval origins and which also has a landscape park and a house. The main house is a Grade II listed building, and it is a 2.5 story home.

There is a majestic staircase that dates back to the 1750s, and on the premises is a large barn and a set of flats that used to be stables.

There is also a section called the pleasure gardens, which consists of walkways, five pools, a sloping meadow, and even a bathhouse.

Since most of the structures found on the property were added at different times – sometimes in different centuries – they sometimes look like they don’t gel together. Nevertheless, a tour of this place is always a very interesting one and is well worth a visit. 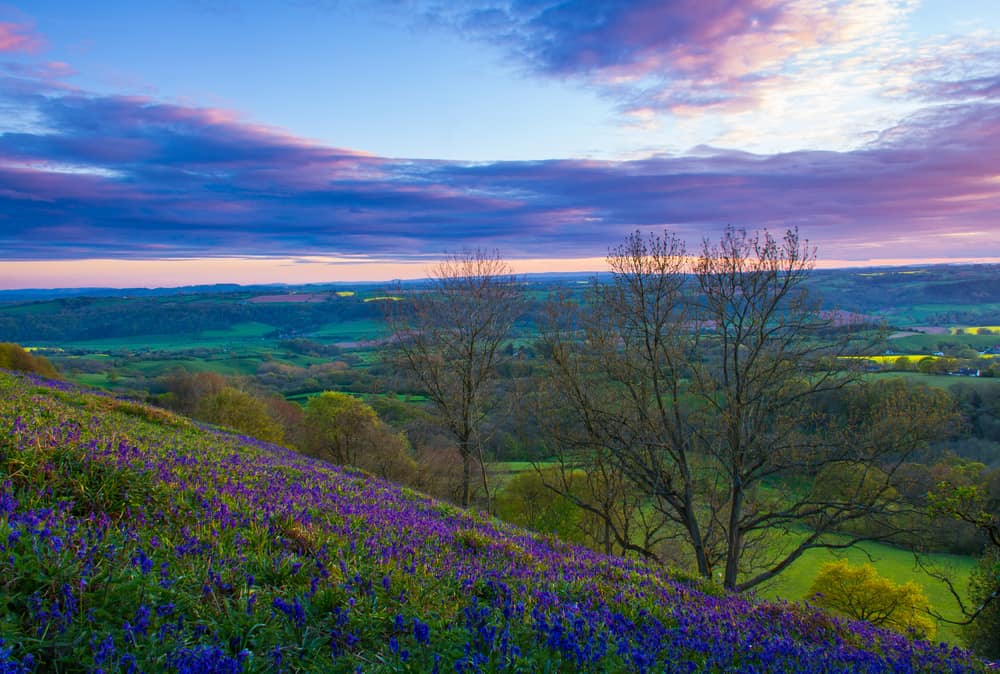 A village and civil parish in the Malvern Hills district, Great Witley is home to St. Michael and All Angels Church, a Grade II listed coaching inn called The Hundred House Hotel, and Witley Court, a Jacobean country house that is now cared for by English Heritage.

This is a very hilly town and therefore stunning to look at, and it’s the perfect place to visit if you love history or architecture.

Their extensive gardens alone are a good enough reason to visit Great Witley, but once you get there, I promise you’ll find a lot more reasons to stay! Enjoy beautiful Worcestershire!