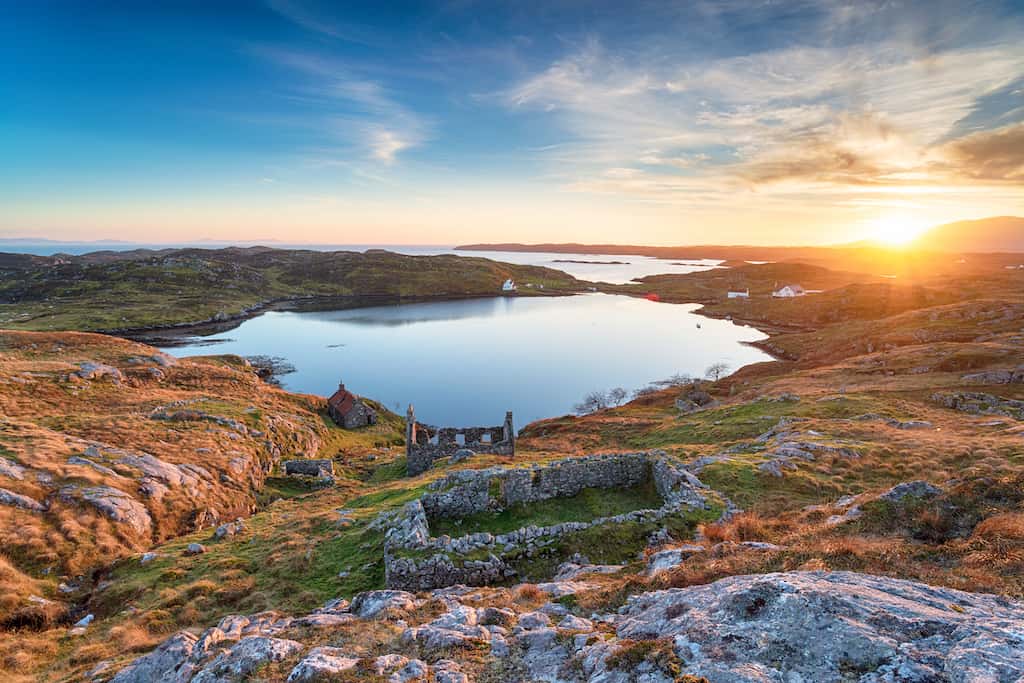 Scotland and the Isle of Skye are popular tourist destinations but very few people make it across the sea to the Outer Hebrides. But that is partly what makes this place so special.

There are many beautiful places to visit in Scotland but not only are these incredible islands filled with mile-long white powder sand beaches, aquamarine waters, and scenic hikes but whilst there I think we saw more highland cattle than people. If we arrived at a beach and there were other people there we felt a bit disappointed. It felt crowded.

The Outer Hebrides consists of 15 inhabited and over 50 uninhabited islands but most of the Top 10 Beautiful Places are in Harris, Berneray, and Lewis and can be visited in a week. Here are my favourite beautiful places to visit in the Outer Hebrides…

1. View From the Top of Beinn Dhubh – South Harris 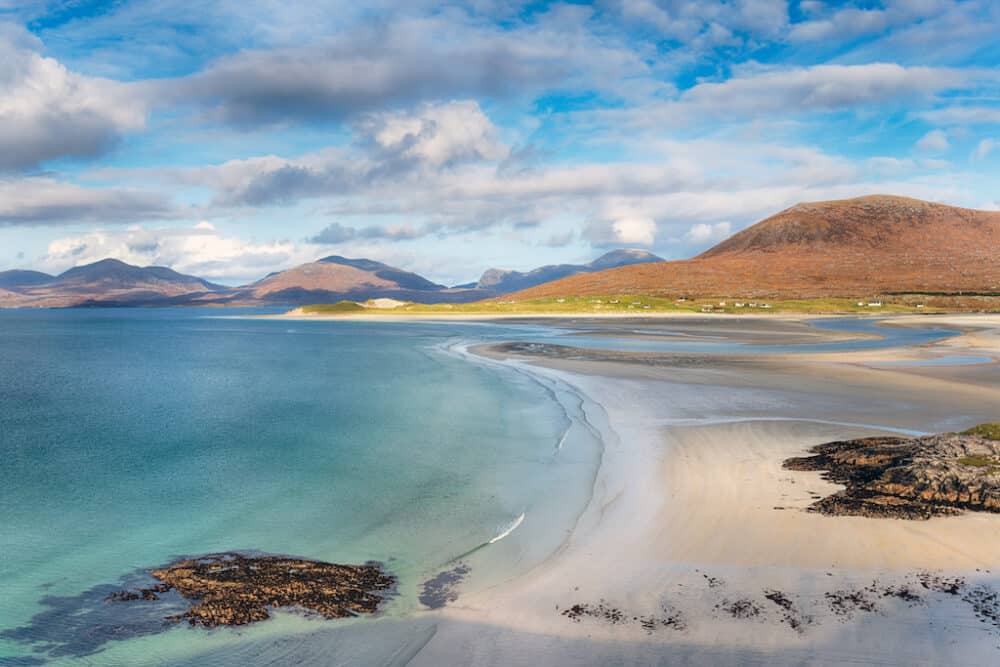 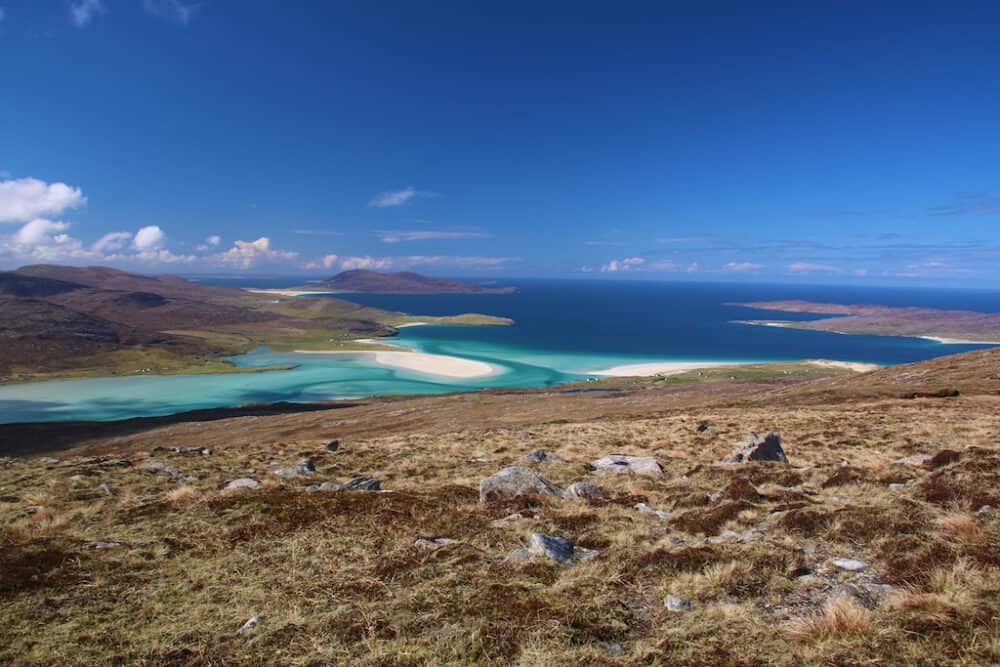 In my opinion, this is the best view in the Outer Hebrides. On a clear day, the landscape stretches out over Luskentyre beach, Taransay Island, and the Atlantic which continues uninterrupted until you get to Iceland.

To get to the top you have two options – either the short or the long version of the hike. The short version ascends straight up the hill behind Luskentyre beach. The long version is a full day walk which starts at a gate located a few hundred metres after you take off the main road and head towards the beach. There is no clear path but you cannot go wrong. Aim for the peak and continue along the ridge until you finally descend to the beach. Returning along the expansive white sands of Luskentyre completes the circular walk. 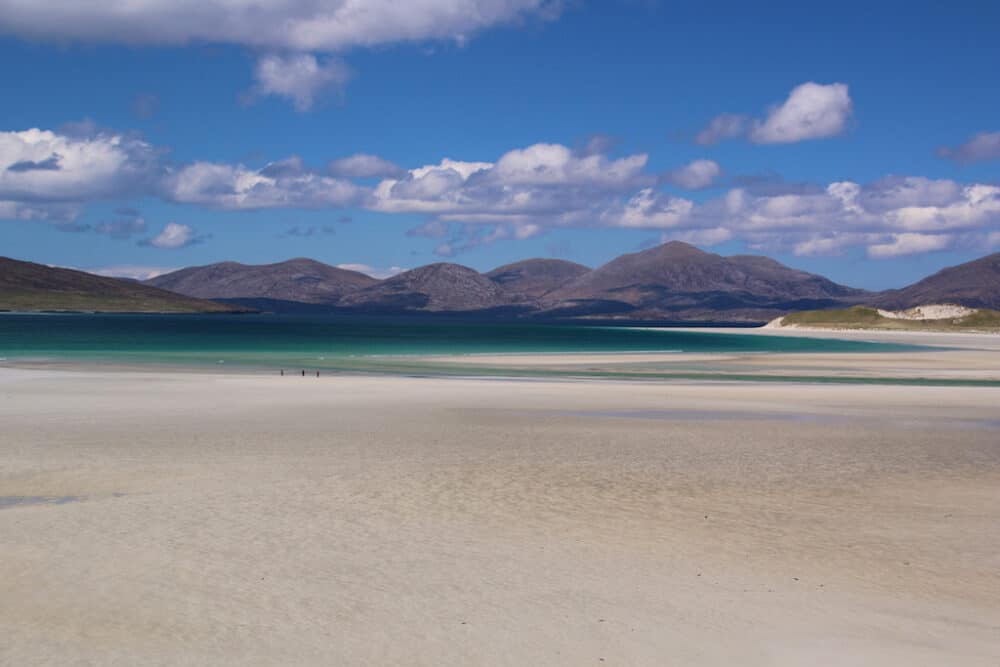 Its place as third best beach in Europe in the 2020 Tripadvisor traveller awards is fully deserved. The only downside to all that acclaim is this is the one beach in the Outer Hebrides where you probably won’t be on your own.

Don’t let that put you off as this is one of the nicest beaches you will ever see. Check the tide timetables and the weather – try to visit when it is sunny and the tide is out. When the conditions are right the white reaches of sand and the aqua-marine water makes this an incredible place.

3. See puffins and seals on a boat trip to the Shiant Islands 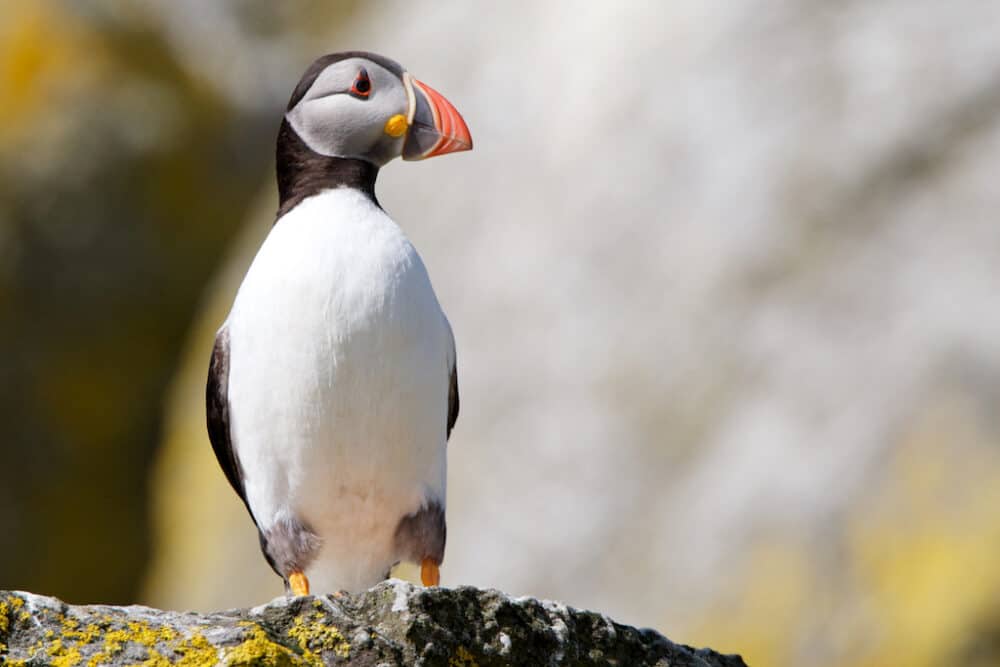 About 45 minutes from Stornoway and Tarbart lie the Shiant Islands which are easily accessible on a half day boat trip. Most tours do not land which can only be done when the sea is calm and the tide is right. But that is not a problem since the seals and puffins are best seen from the boat.

There are plenty of other seabirds as well and if luck is on your side white-tailed eagles can be seen soaring high in the sky. In addition to the birds and mammals and many great conservation projects taking place here, the geological formations are striking with cliffs covered in 150-meter-tall basalt columns (similar to those seen at the Giant’s Causeway in Northern Ireland). 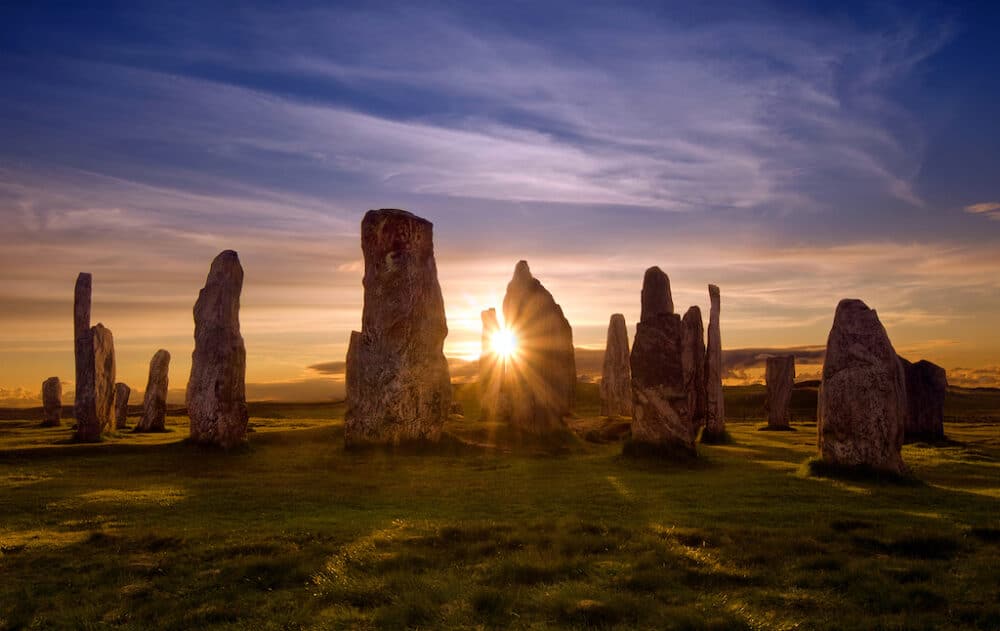 People flock from all over the world to see Stonehenge but few have heard of the Calanais Standing Stones. Erected 5,000 years ago they actually predate Stonehenge by 2,000 years.

What purpose they serve is no less of a mystery. Local folklore has it that the stones were once giants who roamed the earth. Thought to be evil spirits they were petrified by St Kieran when they refused to convert to Christianity.

5. View From the Top of Ceapabhal Hill– South Harris 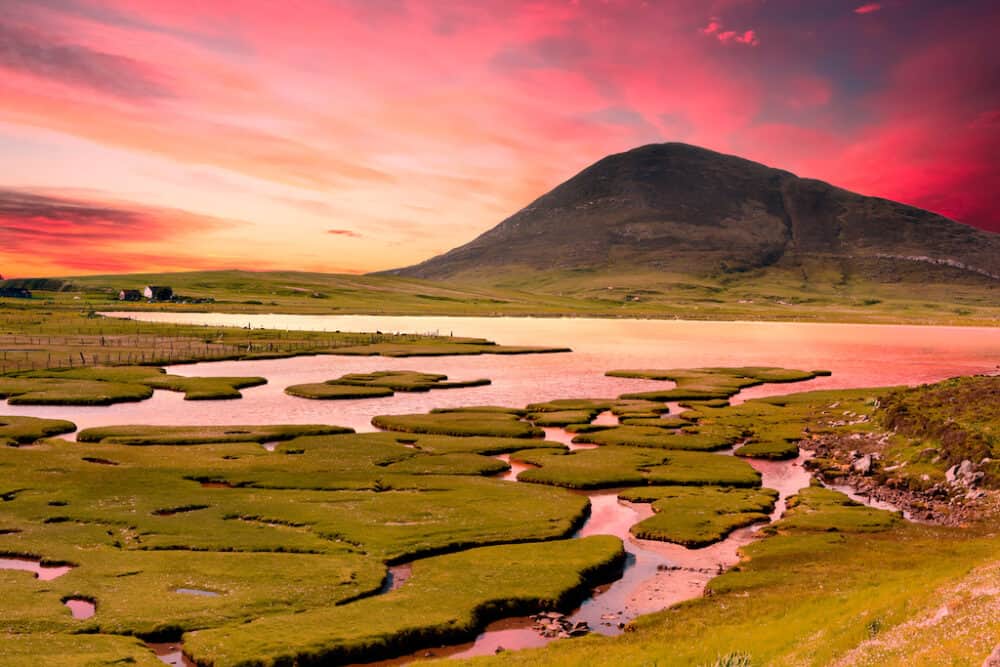 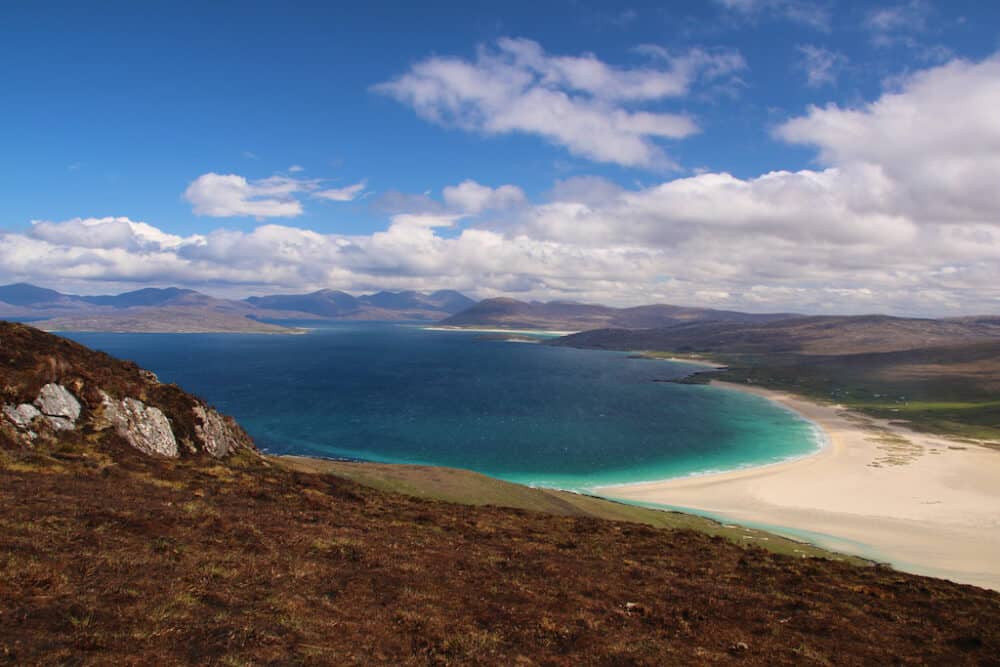 It is a short but steep hike up Ceapabhal Hill but there is little in the way of a matured path. This seems to be a common feature on many of the hikes in the Outer Hebrides. However, it doesn’t matter. All you need to do is to continue to climb up.

At the top you will be rewarded for your hard work by views of the North Harris Mountains on one side and Berneray and North Uist on the other.

After the hike make sure you stop by the hobbit-like Temple Café located close to the foot of the hill. Here you will find some of the best chocolate brownies you will have tasted.

6. Have Lunch with Seals in Backhill Bay – Berneray and North Uist 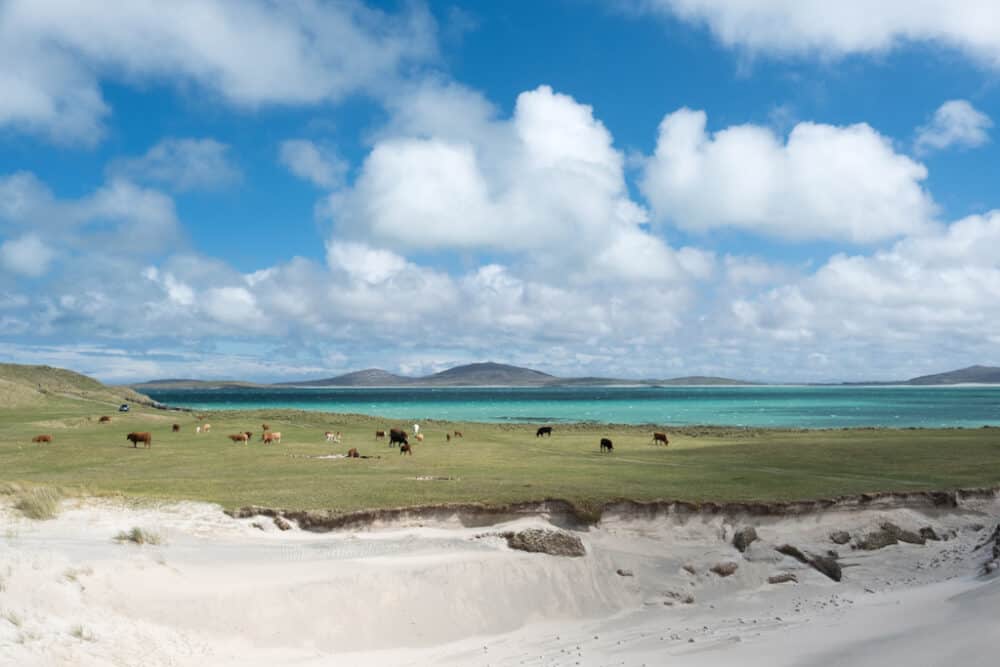 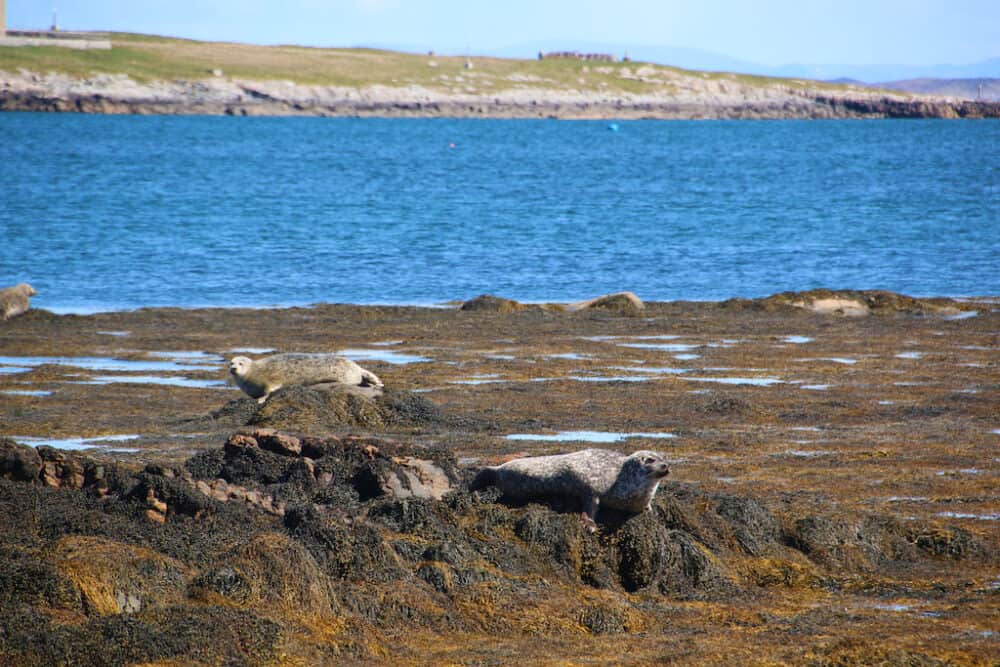 If the weather is on your side Backhill Bay is a great place for a picnic lunch since you are nearly guaranteed to have seals join you. There are a few places in the Outer Hebrides where you have a good chance of seeing seals but this is one of the best since it allows you to get up close. Having said that the seals are quite skittish so move slowly and do not go too near to them or you will scare them away.

During the week ferry times allows this spot and Berneray West beach to be visited during a day trip. Travelling through North Uist is also a good way of getting to the Isle of Skye since the direct Tarbert-Uig ferry can be very difficult to book. 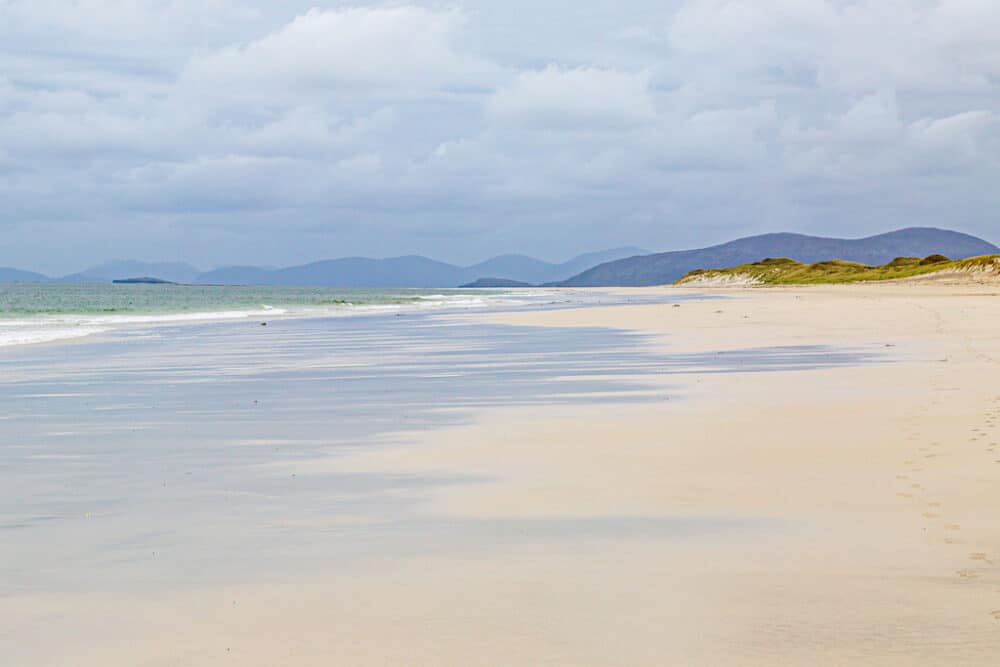 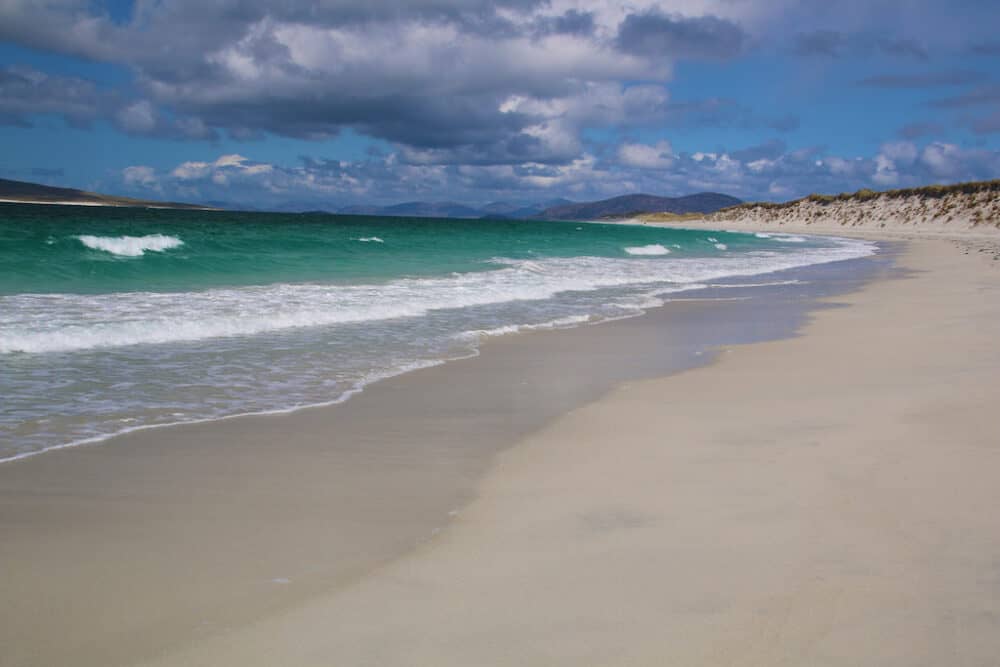 The beaches in the Outer Hebrides look like they have come straight out of a holiday brochure and had I not been wearing my down jacket in the middle of the summer I could have been fooled into thinking I was somewhere in South East Asia. That must have been what the Thai tourist board thought when they mistakenly used a photo of this beach in an advertisement for Kai Bae Beach! 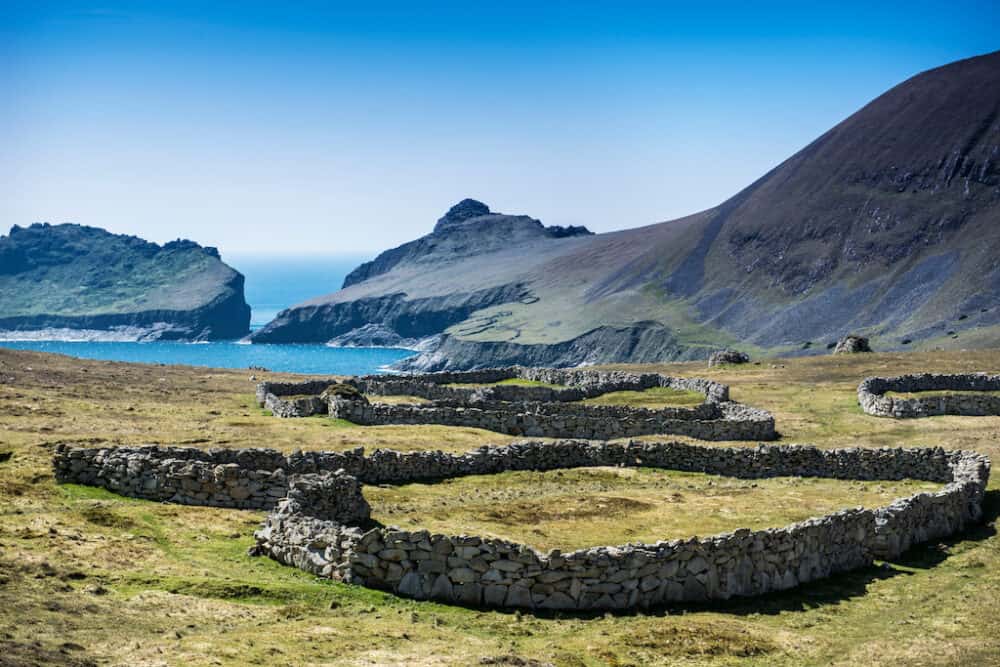 Over 40 miles north across the wild Atlantic lie the four small islands that make up the world heritage site of St Kilda. Inhabited from the Bronze Age, people survived by keeping sheep, fishing, growing basic crops and eating seabirds and their eggs. The population peaked at 200 but nobody has lived here since the last villagers were evacuated at their own request in 1930.

The islands can be visited on a 12-hour long day trip. The boat ride takes at least 3 hours each way, typically under powerful swells, so if you get seasick this is probably not for you. Should you still be interested group tours must be booked well in advance. 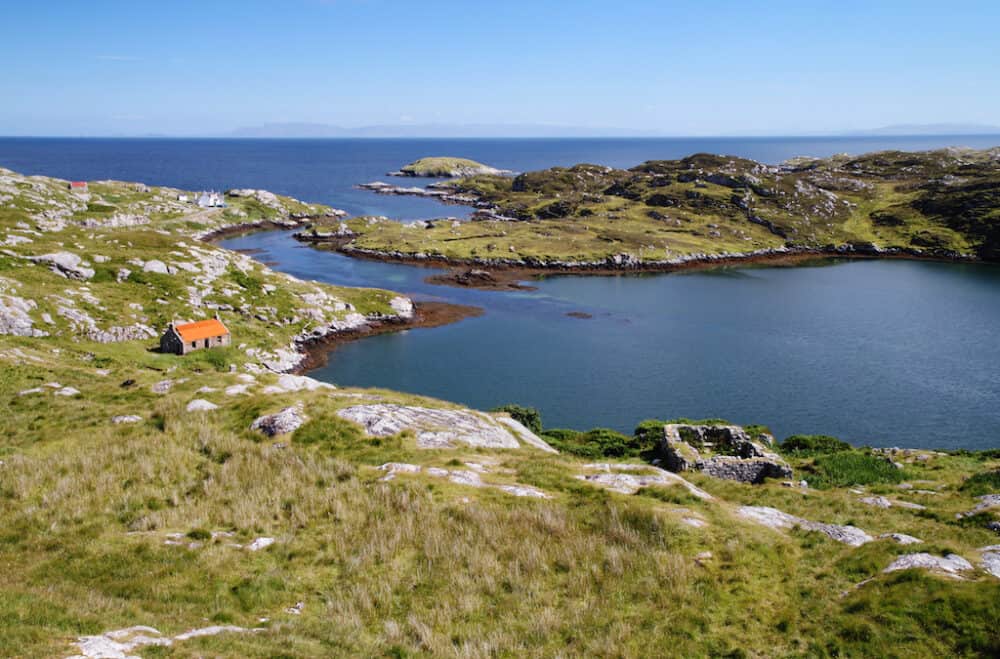 While the west coast of Harris has some of the best beaches, not just in Scotland but across the UK as a whole, the east coast has a rugged and inhospitable lunar terrain.

The golden road runs from the ferry port of Leverburgh to Tarbert and received its name since it was so expensive to build the locals said it must have been paved with gold. It is best to drive towards Tarbert so as to have the sun behind you – if you are lucky enough to have nice weather that is!

It is not an easy journey being a single lane and with the road twisting and turning as it hugs the shoreline. As you drive look out for seals which often bask in the inlets and on the small islands. 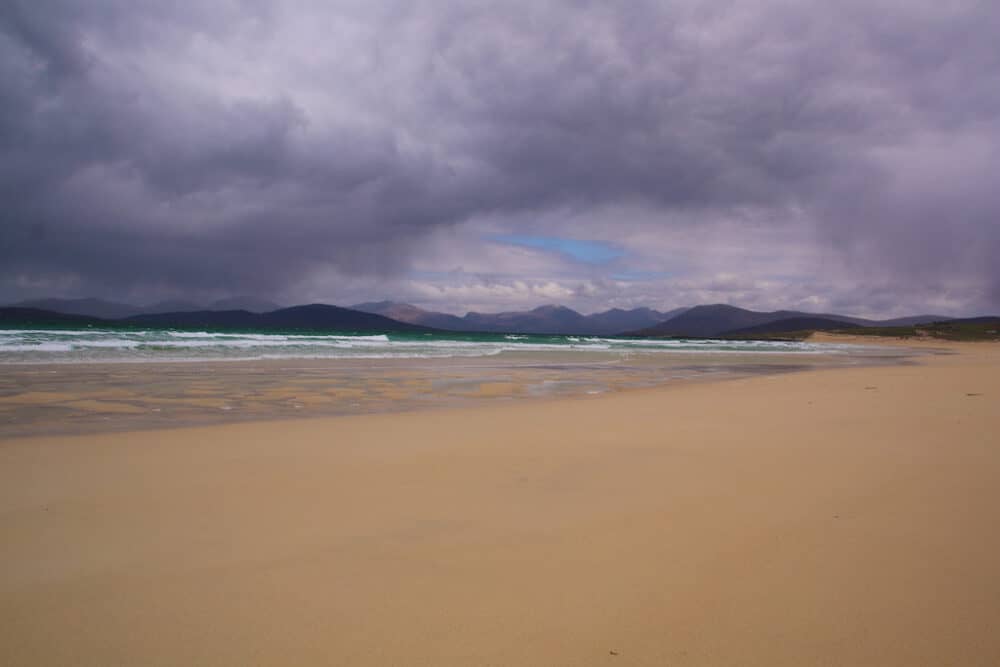 Waves from the turbulent Atlantic crash onto the golden sands at this beach and it is popular with surfers. There is a golf course overlooking the bay providing good views for golfers and non-golfers alike.

Its horseshoe shape is best seen from the viewpoint by the golf course located across the road from Blue Reef Cottages. To get onto the beach drive through Scarista village and park where the road widens out. It is a short walk through the sand dunes to the beach.

Written by our guest blogger Kristin from Adventures with Ensuite. Kristin loves to travel in style to exotic destinations. Her blog focuses on off the beaten path destinations and she hopes to inspire readers to try something new. You can also follow Kristin on Instagram.