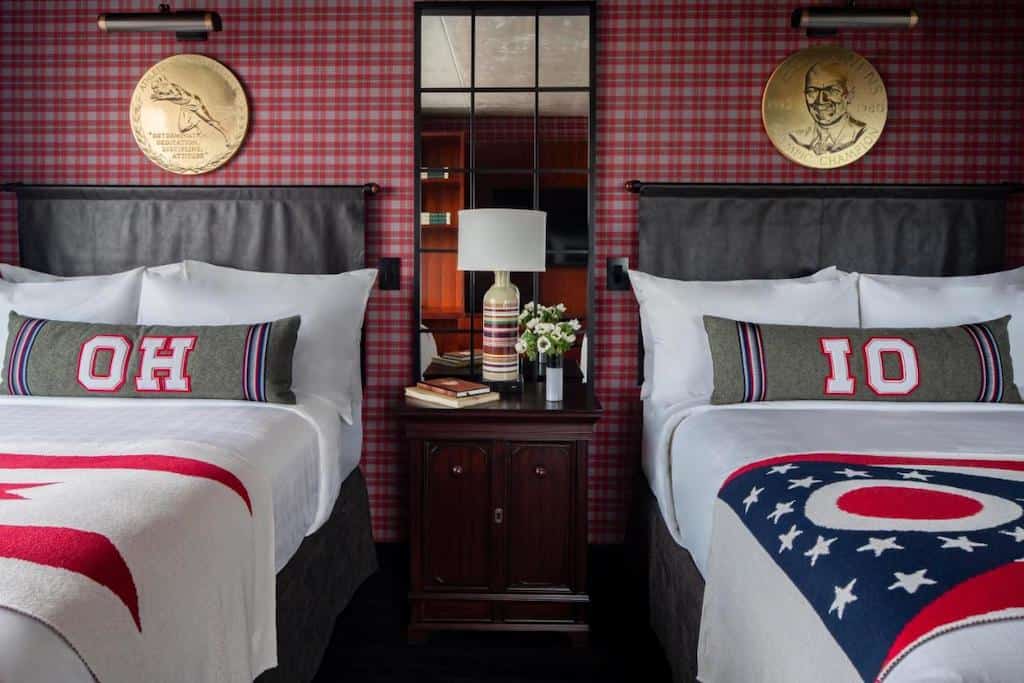 The upbeat, intriguing, and fun university city and Ohio’s capital is Midwest’s hippest city. In fact, it’s been named (by Yelp analysis) to be the nation’s ‘hottest hipster market.’ Which is probably down to its youthful and creative vibe, numerous trendy coffee shops, lively bars, eclectic mix of diverse neighborhoods (there’s even a German Village!), the awesome list of annual events and festivals, and some of Ohio’s best arts and culinary experiences,  and diverse neighborhoods. Want to know where the cool kids hang out and then sleep too? From sleek boutique hotels to fun Instagram-friendly high-rises, here are our Top 10 of the cool and unusual hotels in Columbus, Ohio (in no particular order)… 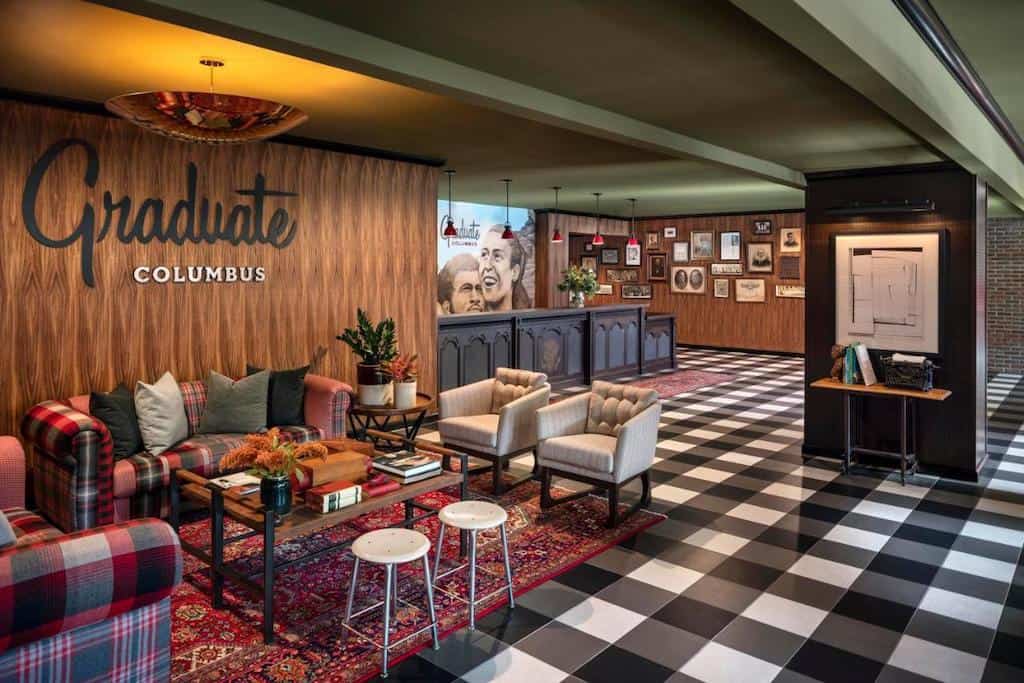 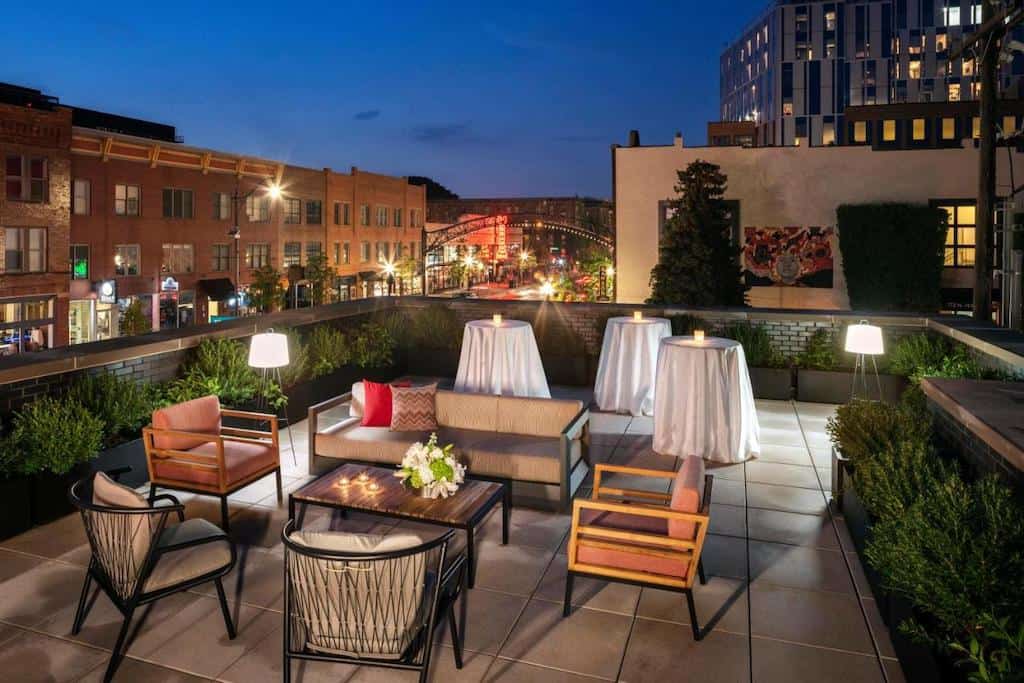 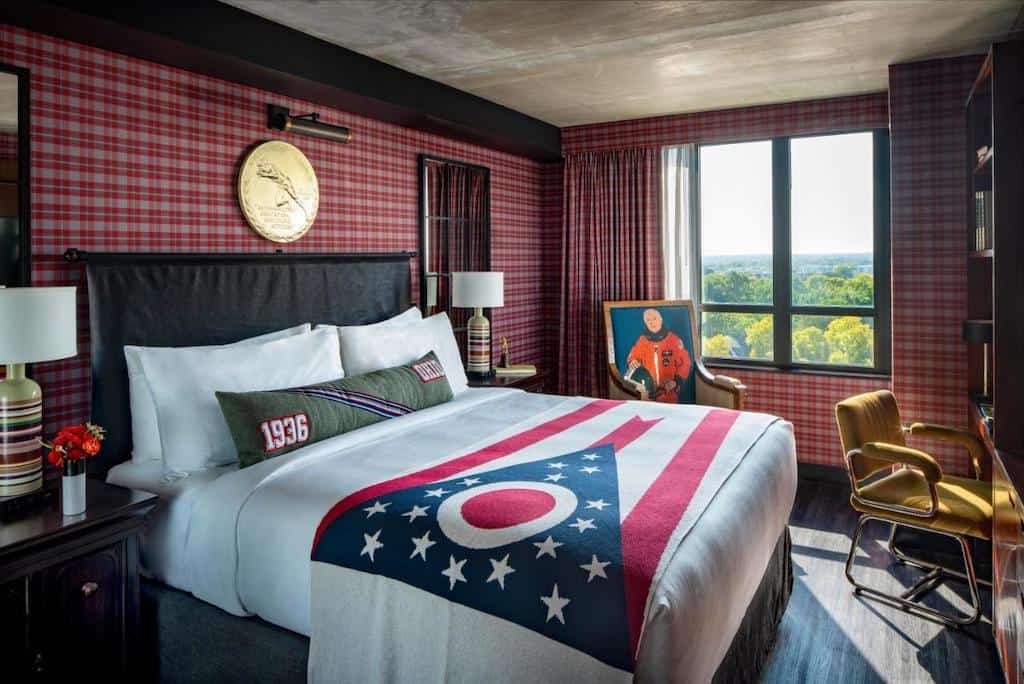 With warm, tailored but very cool spaces, you’ll feel right at home here. The Studio Suite at the Graduate Columbus is excellent for those who need a little more space. It has a master bedroom and a separate living area. Decked out with hip, themed Ohio-inspired interiors, you’ll love all the little details in the room. Grab some food at either Shake Shack or Pointdexter – both situated at the hotel – or head to one of the restaurants nearby. The unique hotel has complimentary bike rentals to help you explore Ohio, and a gym with a Peloton bike.

The Buckeye’s bold colors surround you in the lobby and pieces of Ohio’s history adorn every room at this Columbus Hotel. The hotel is near the Italian Village, BalletMet, The North Market and Wagner – Hagans Auto Museum.

2. Moxy Columbus Short North – one of the coolest and funkiest places to stay in Columbus perfect for Instagrammers 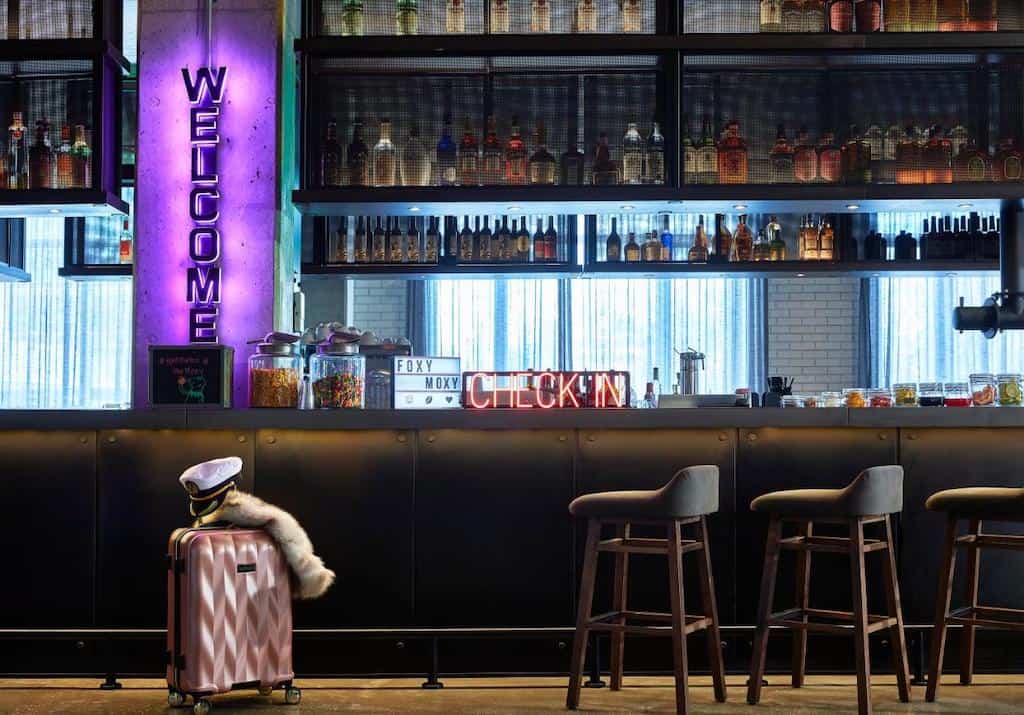 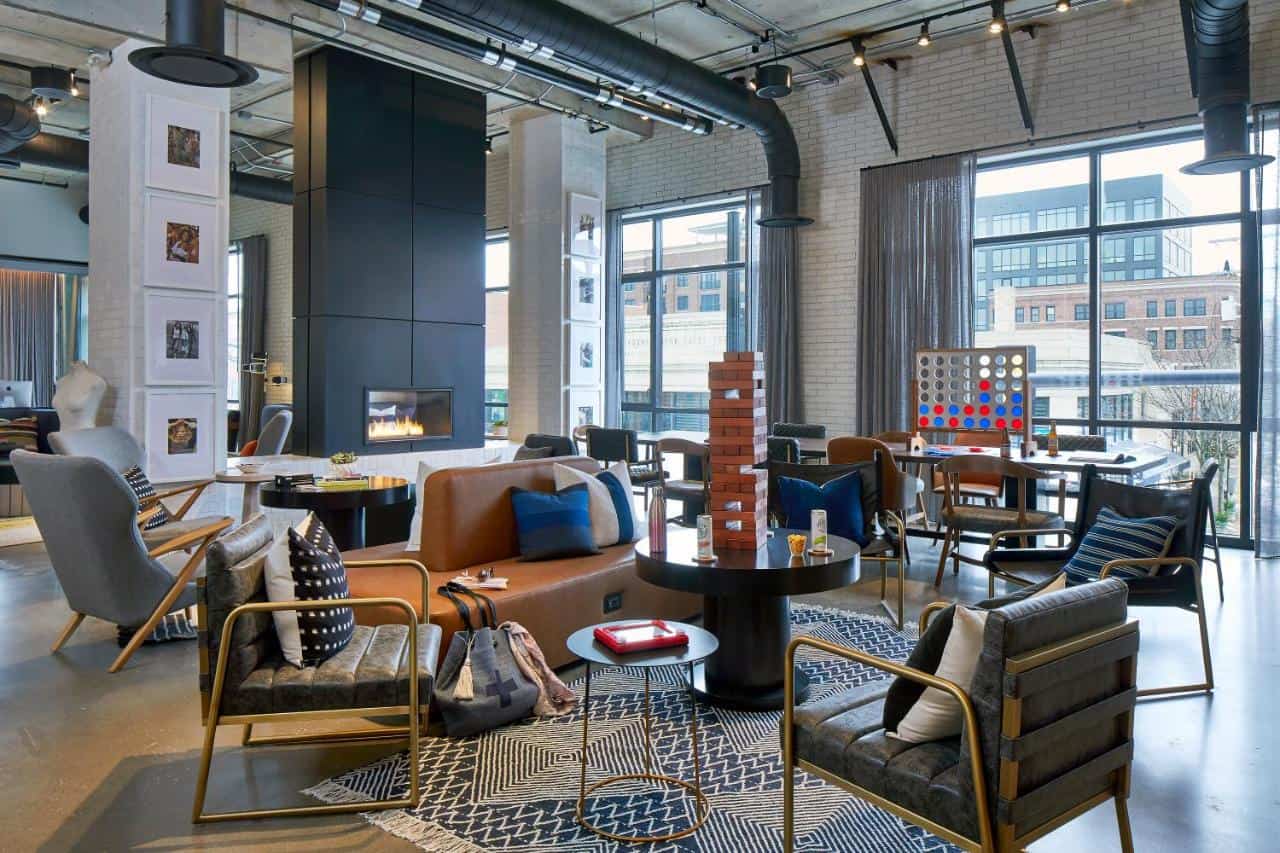 Located in Columbus (Italian Village), Moxy Columbus Short North is within a 15-minute walk of Greater Columbus Convention Center and Nationwide Arena. Stay in one of the cool and unique 116 guestrooms featuring plasma televisions. Your trendy room comes with a pillowtop bed and complimentary wireless Internet access keeps you connected. Bathrooms have showers and designer toiletries.

At Moxy Columbus Short North, you check-in at the bar and immediately receive a token for a free drink. There is a state-of-the-art gym, lightning-fast wifi and sixth-floor terrace to seal the deal. Additional features include an arcade/game room and gift shops/newsstands. 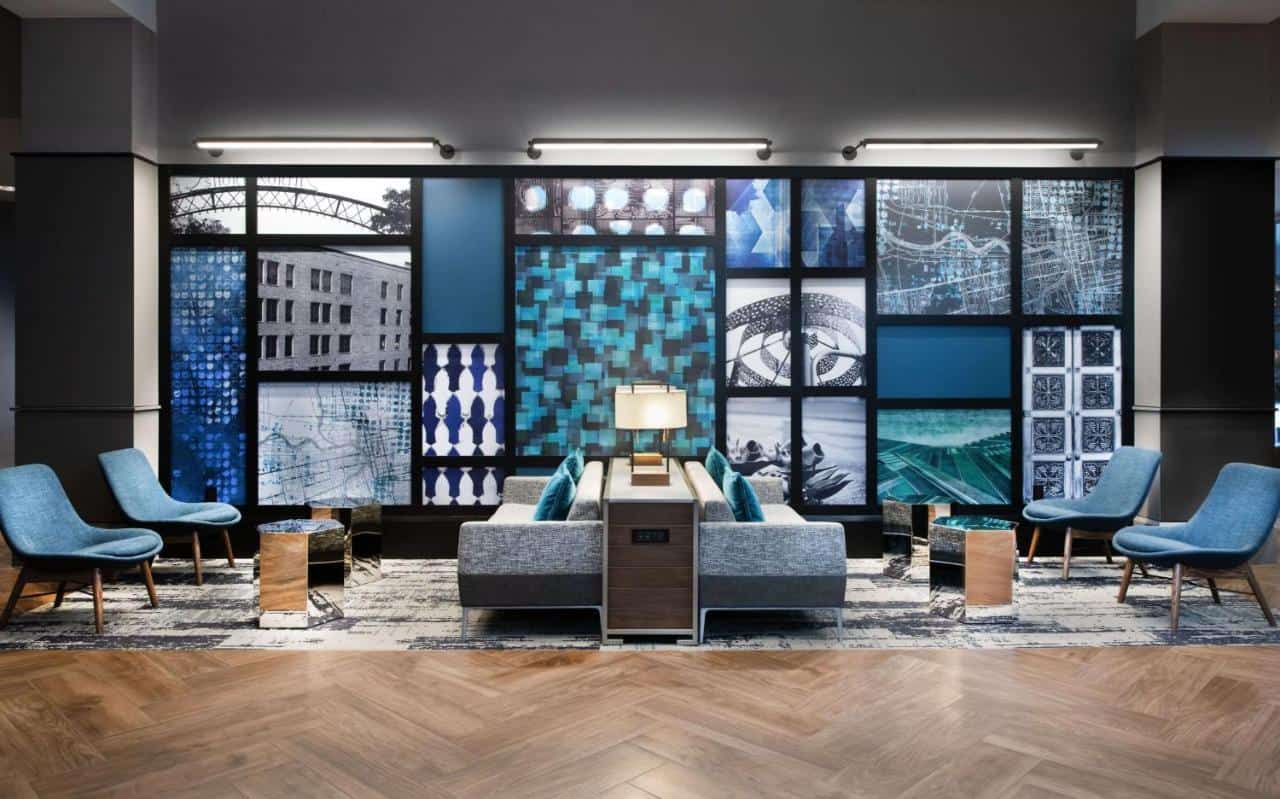 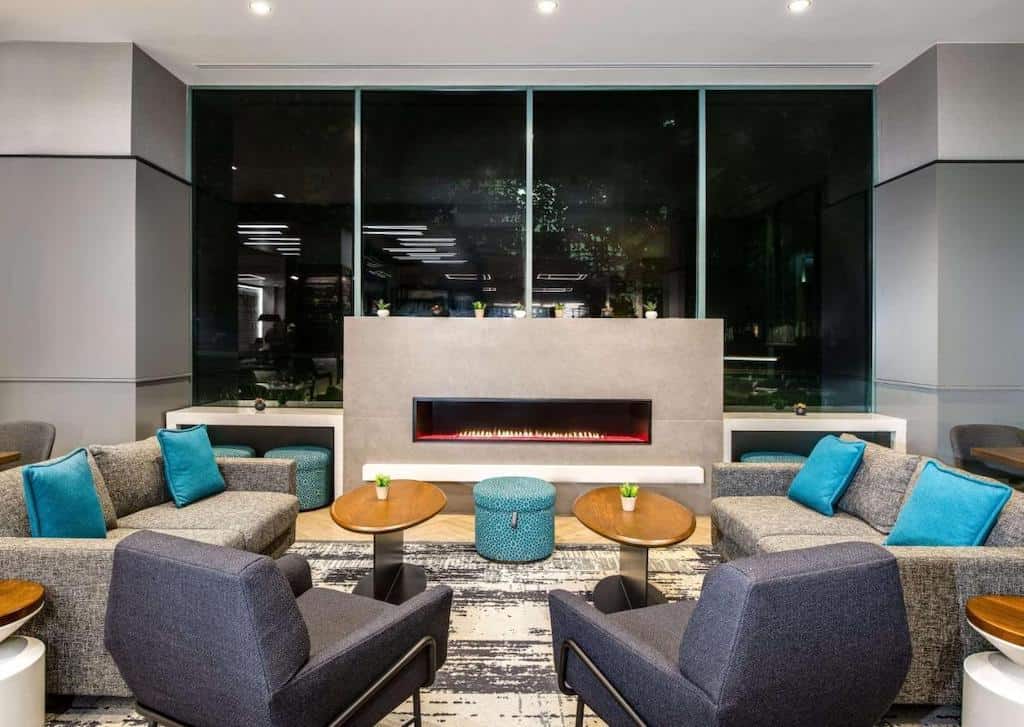 Make yourself at home in one of the cool 421 air-conditioned rooms featuring refrigerators and flat-screen televisions. Complimentary wireless Internet access keeps you connected, and cable programming is available for your entertainment.

With a stay at Sonesta Columbus, you’ll be centrally located in Columbus, just a 5-minute walk from Nationwide Arena and 6 minutes by foot from Greater Columbus Convention Center. Featured amenities include a 24-hour business center, express check-out, and complimentary newspapers in the lobby. Planning an event in Columbus? This chic and stylish hotel has facilities measuring 13000 square feet (1208 square meters), including a conference center.

4. AC Hotel by Marriott Columbus Downtown – a sleek, sexy, and stylish hotel with a trendy rooftop bar located in downtown 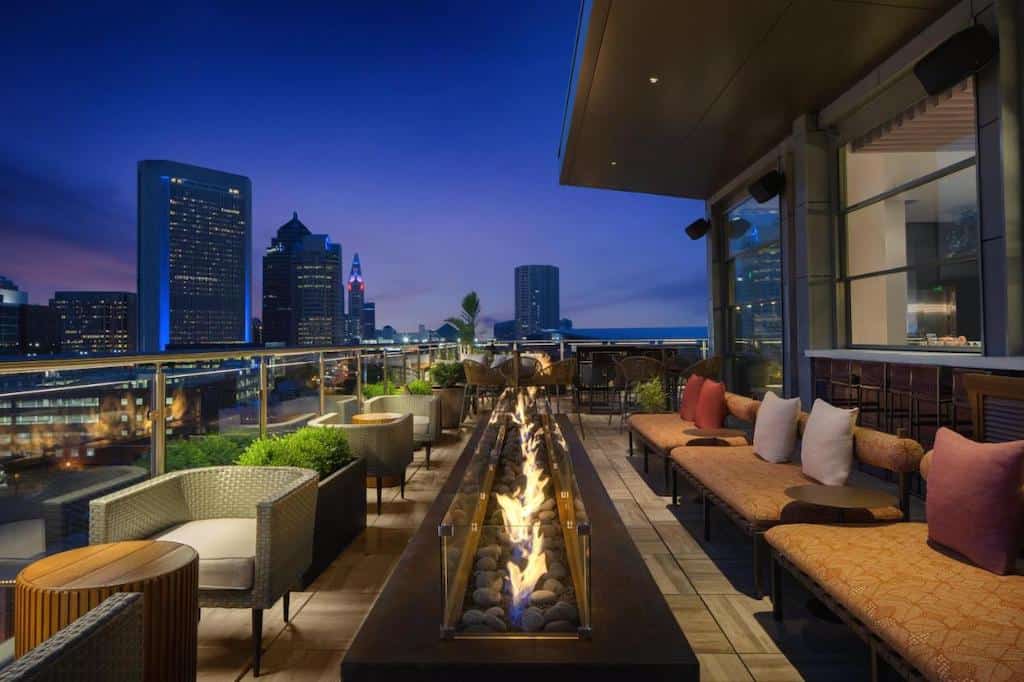 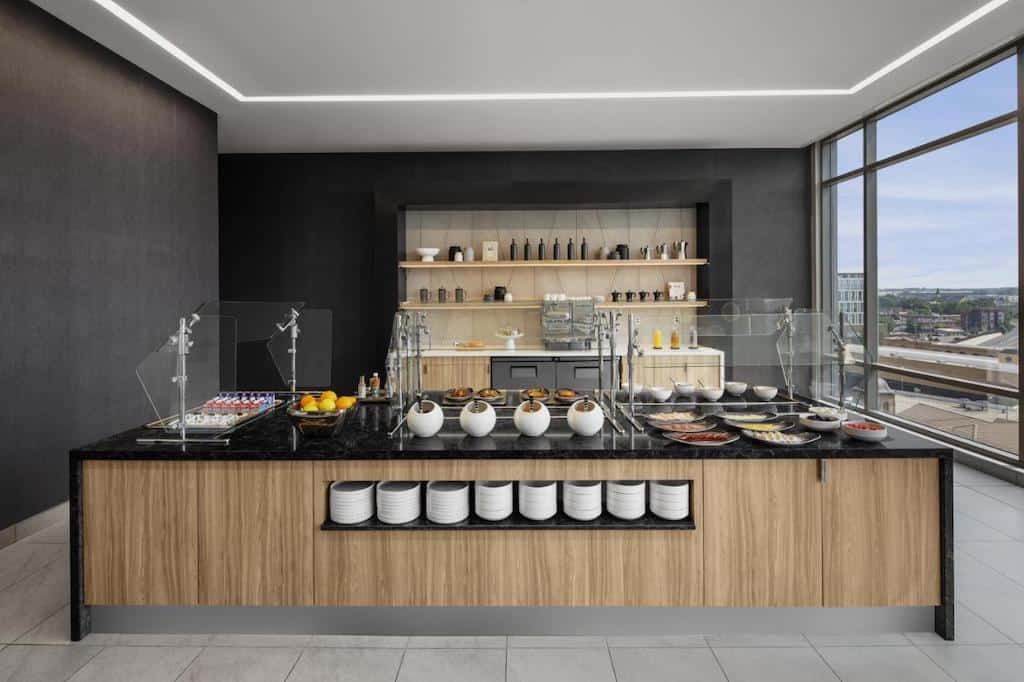 The AC Hotel by Marriott Columbus with modern and sleek European-influenced design and service will make you feel like you’re far from Columbus. Tasty tapas and cocktails await you on the rooftop bar Vaso, while Spanish-style breakfast greets you every morning at AC Kitchen.

Spacious rooms with floor-to-ceiling windows let you admire the city as you plan your night out in Bridge Park. Shops, restaurants, and the Exchange event center are only steps away, offering you the best of the city, no passport required. Easily one of the coolest and most unique places to stay in Columbus, Ohio. 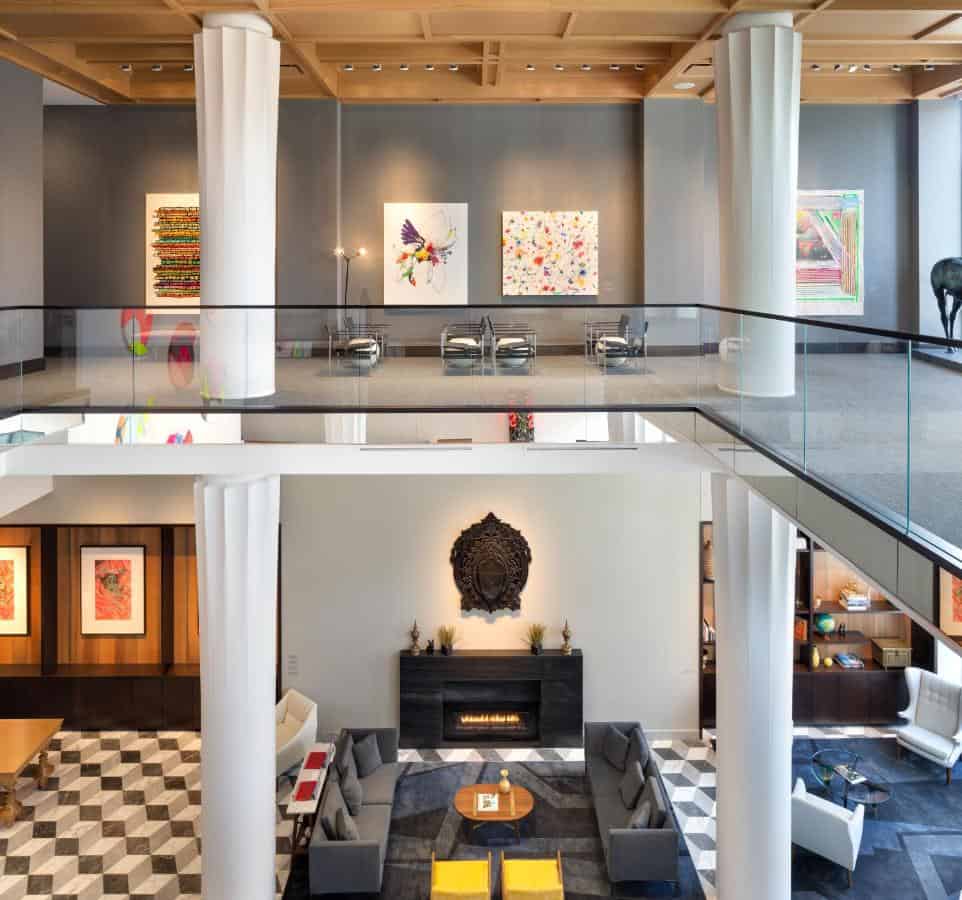 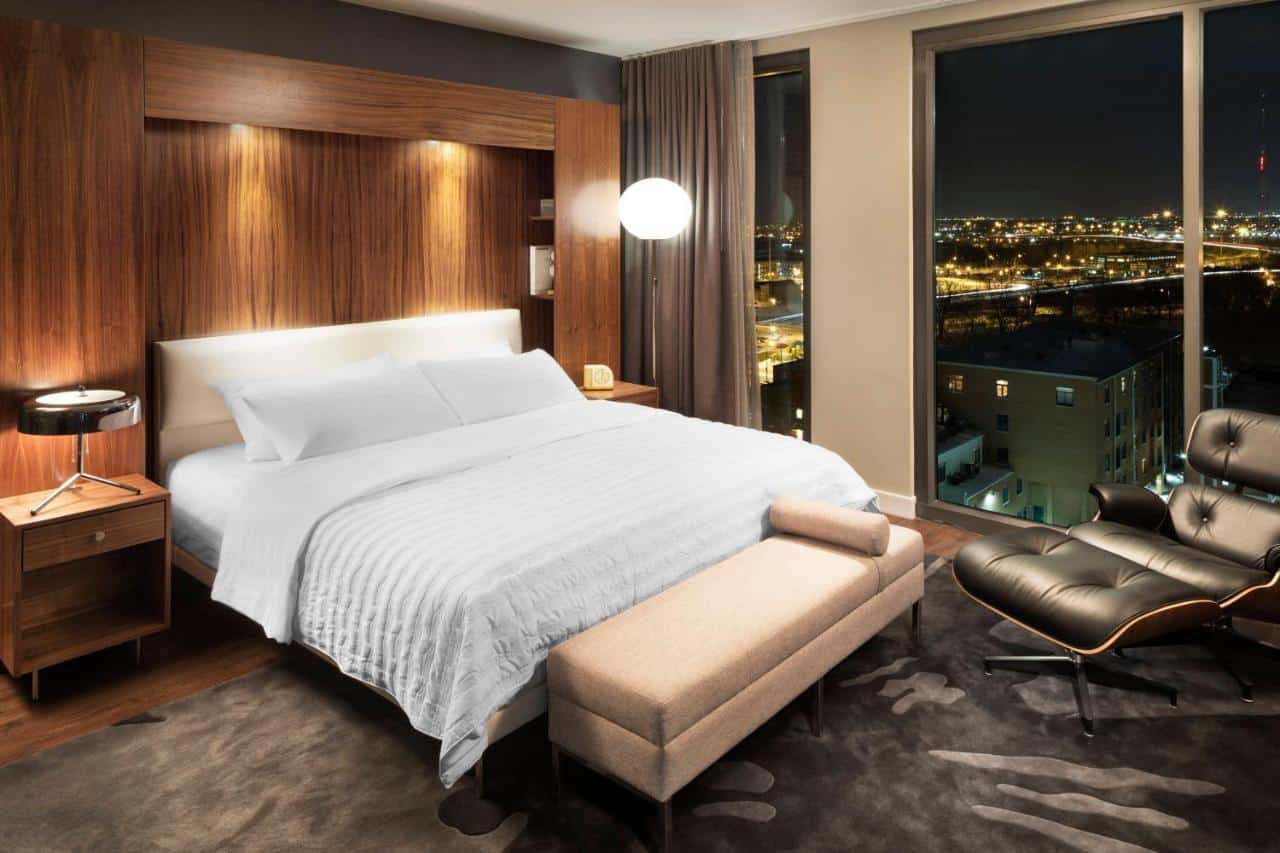 Le Meridien Columbus, The Joseph is a 4-star boutique hotel in the Short North Arts District near the North Market and the Wexner Center. You can embrace your artistic side at one of the city’s finest boutique hotels. This trendy Columbus hotel is recommended for weddings and anniversary celebrations. It is one of the best luxury hotels in the Columbus area. You’ll be served delectable farm-to-table fare and tasty cocktails.

You even have access to pampering in the spa suites while you’re staying in exquisitely handcrafted rooms. You can check out the farm-to-table cuisine at the Guild House, or be invited to visit the masterfully curated Pizzuti Collection at the Columbus Museum of Art, free of charge. Not to mention, you’re in a lovely neighborhood near High Street. Definitely one of the best boutique hotels in Columbus. 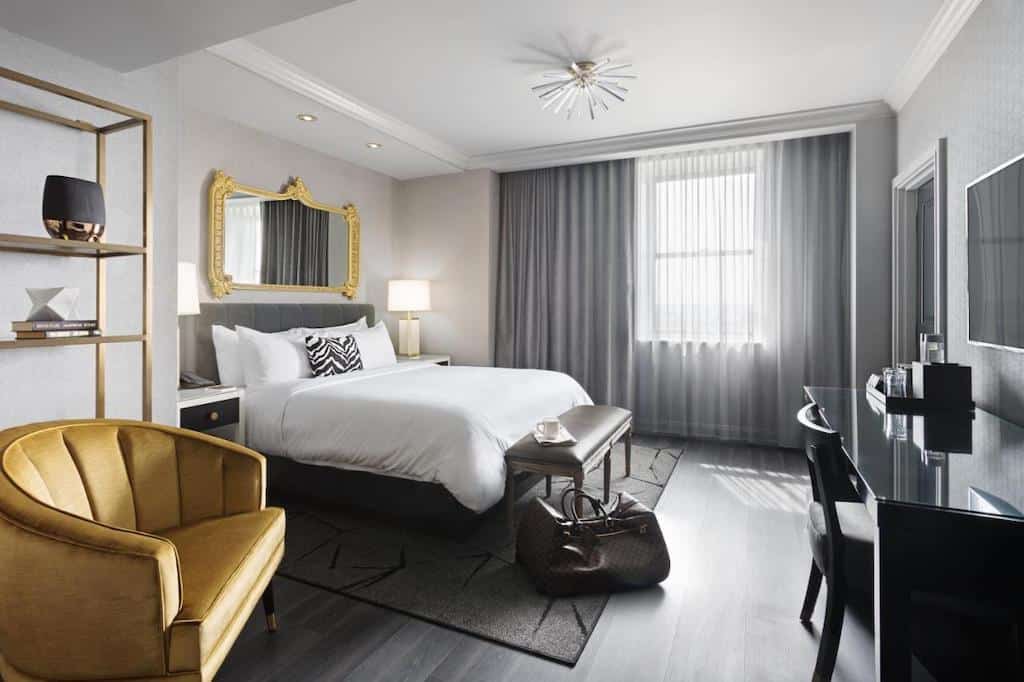 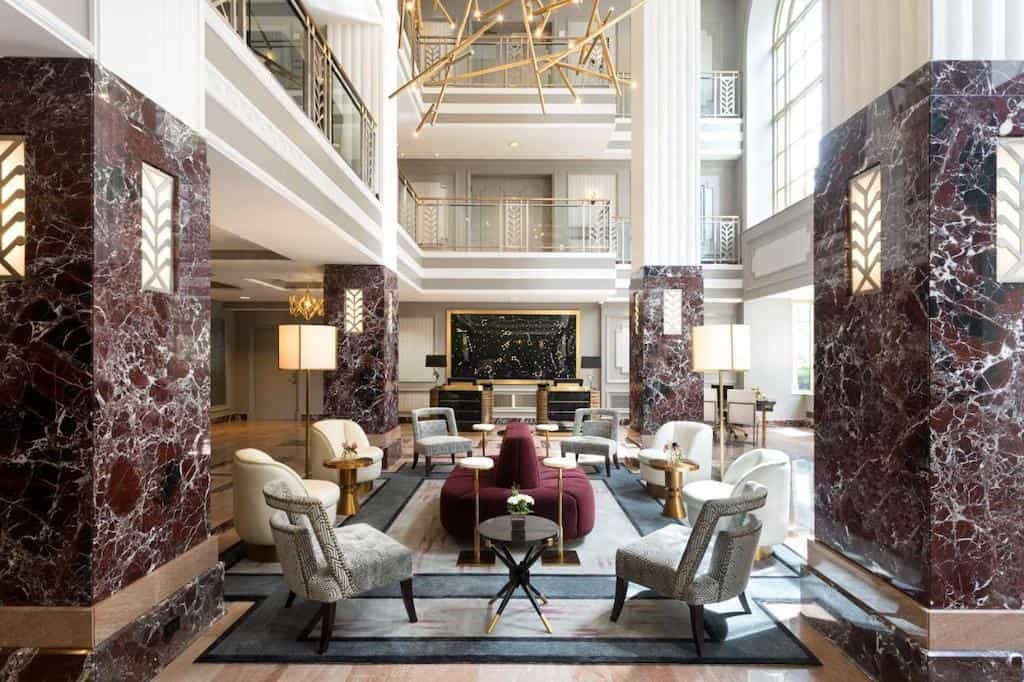 Situated in the heart of downtown Columbus, the hotel is a 4-star luxury boutique-style hotel and has a seamless blend of historic and elegant French design. Rooms come with sophisticated décor, and some even boast gorgeous river views. For a more spacious room, stay at the One Bedroom Larger Suite with its separate living room area and oversized shower. Fancy a little star gazing? A telescope in every suite will surely catch your eye. Grab a drink at Keep Liquor Bar while enjoying some small bites, or head for a quick workout at the fitness center.

You’ll even experience fine dining in the on-site Modern French Brasserie that serves themed cuisine and mouth-watering cocktails. The chic boutique hotel is a short distance away from Capital Square, Ohio Theatre, the Palace Theatre, and Scioto Mile. 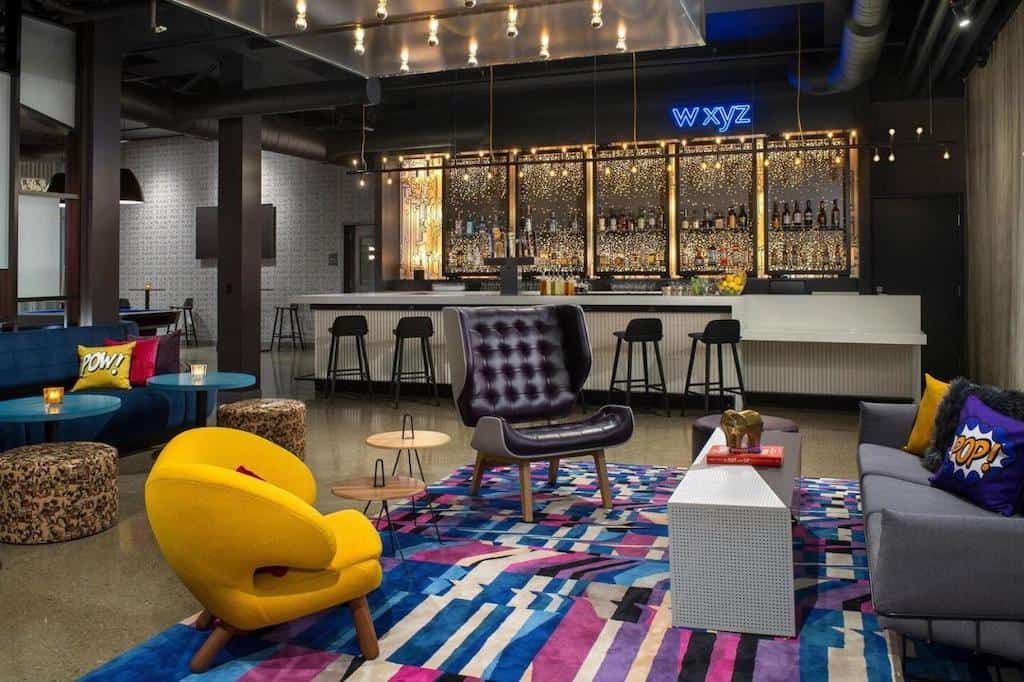 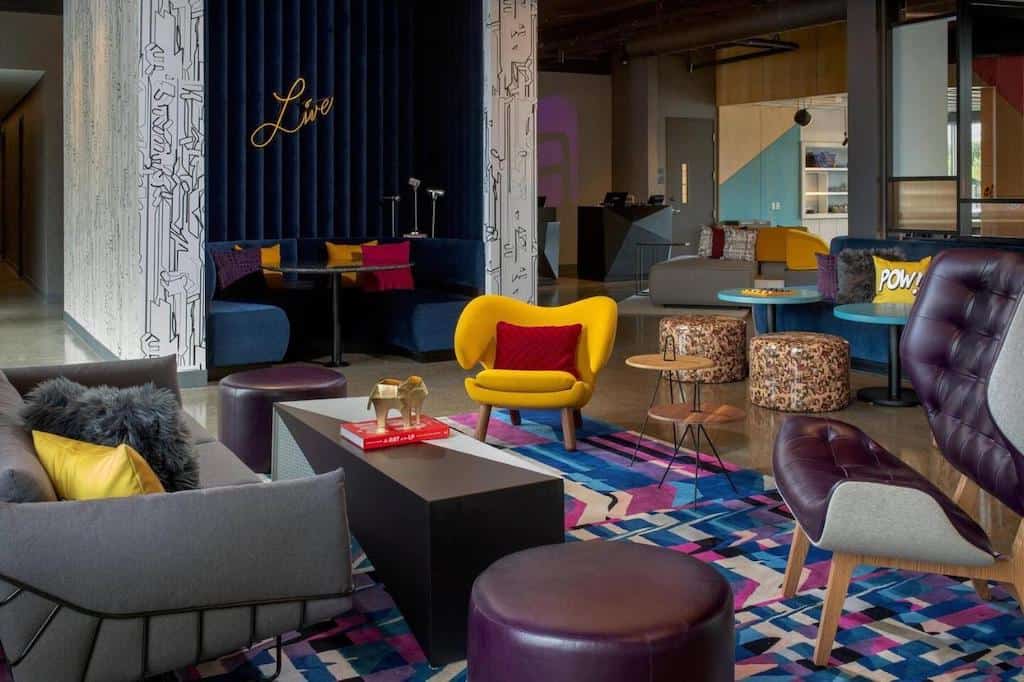 Located 10 miles north of downtown Columbus, just off I-270. A pet-friendly hotel for the family. A very hip, stylish hotel with a chic and creative vibe located 1 mile from both Sharon Woods Metro Park and Inniswood Metro Gardens and 11 miles from Columbus downtown.

As easy as it is to brew coffee in your stylish suite and spend every day in the city, take advantage of Aloft’s northern location, 15 minutes from downtown Columbus, to see another side of the city. A creative and funky place to stay in Columbus with a youthful vibe! 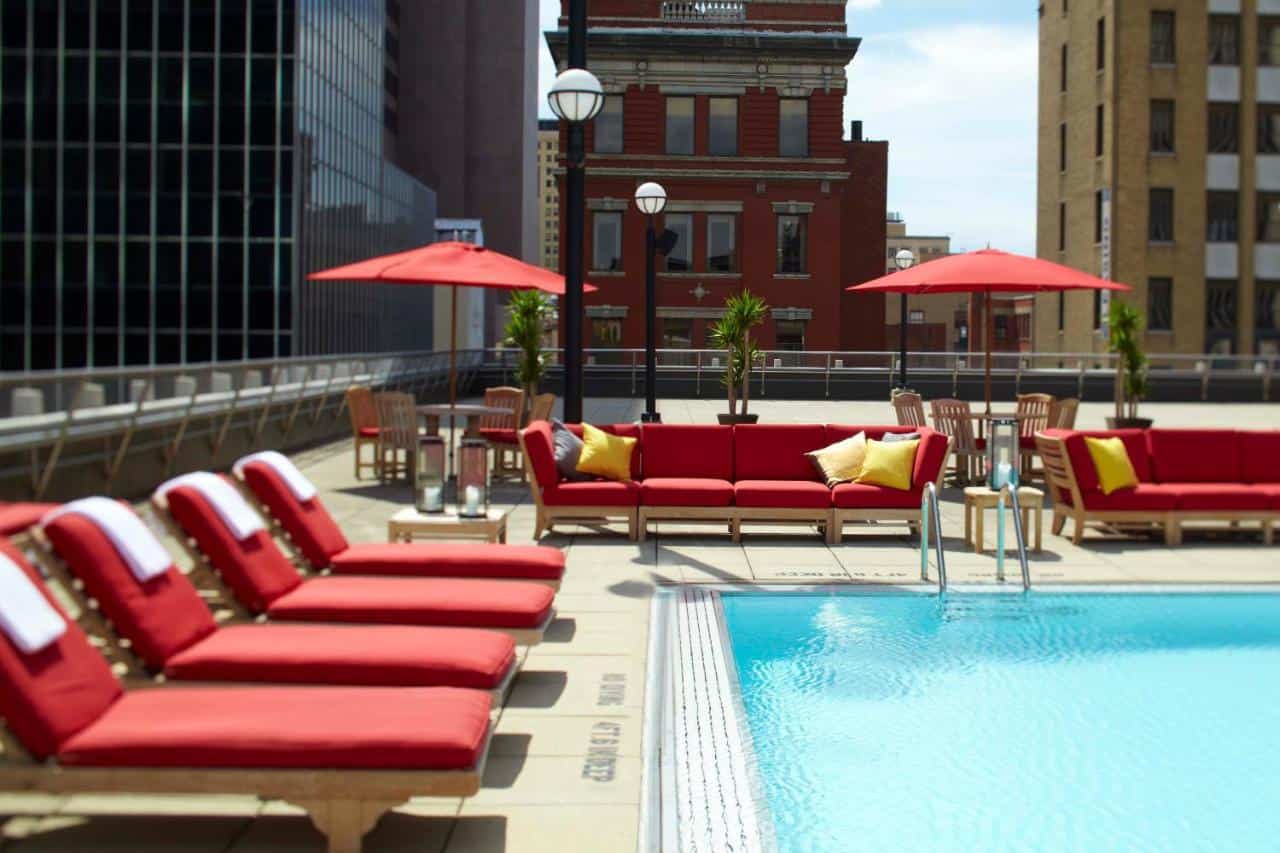 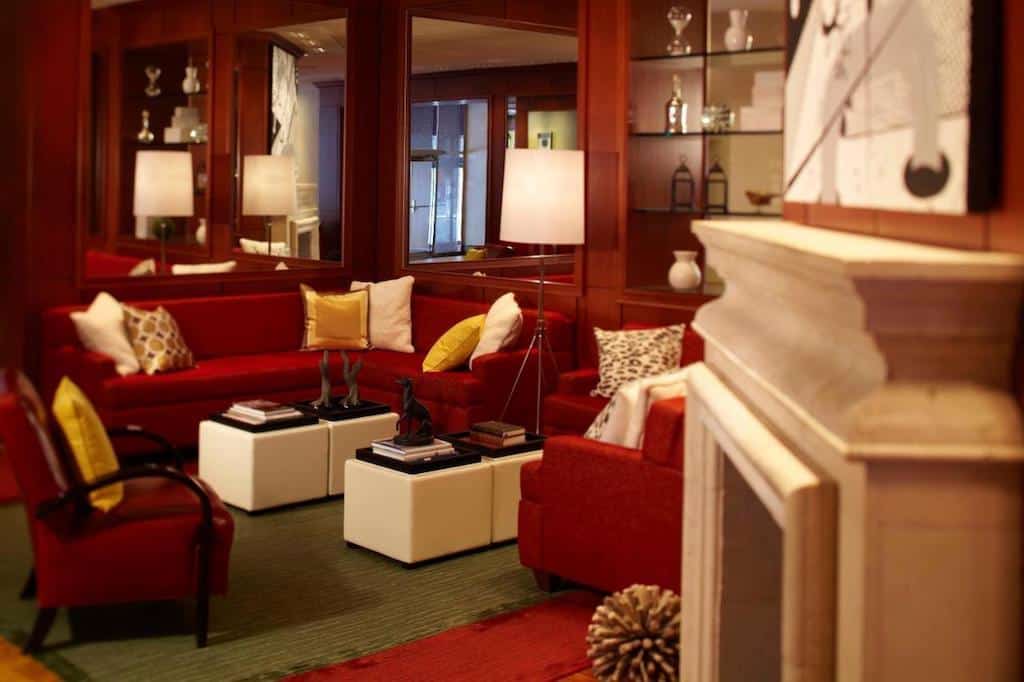 Renaissance Columbus Downtown Hotel is a family-friendly high-rise 4-star hotel near the Columbus Museum of Art and COSI Columbus. Modern adventurers will love being at the center of all the fun, which is why this high-rise is an excellent choice for great hotels in downtown Columbus.

Besides its eclectic décor and artwork, you’ll have access to deluxe amenities like a rooftop pool, a bar and lounge, and comfortable rooms. Plus, you’ll be near many downtown hotspots like the theater, the historic village, and trendy eateries.

9. The Urban – a modern, lively and upbeat hotel perfect for Millennials and Gen Zs 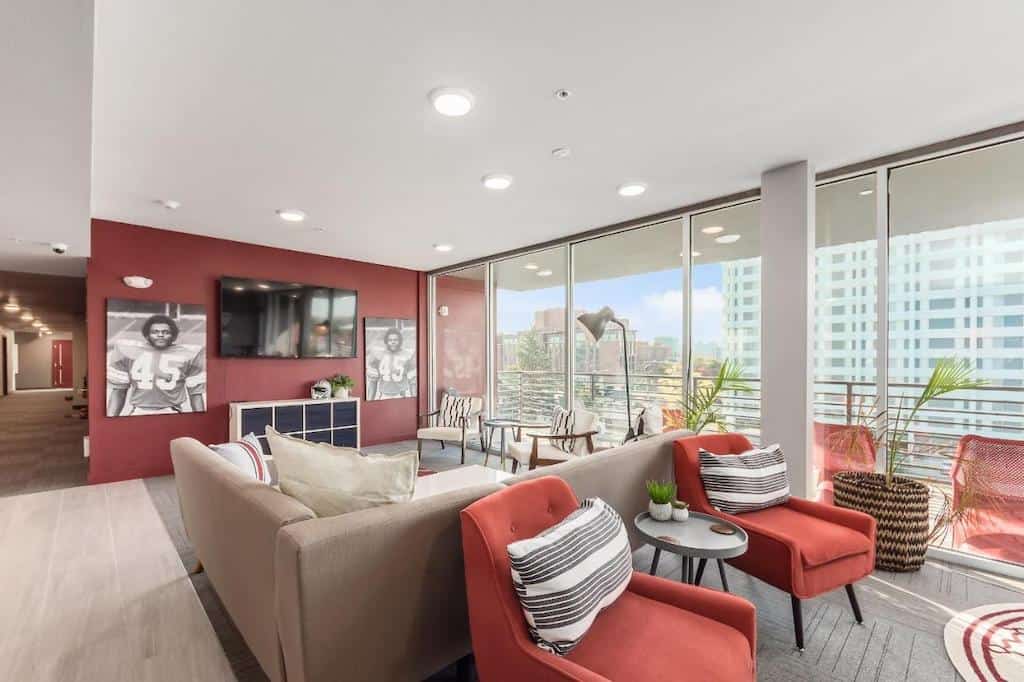 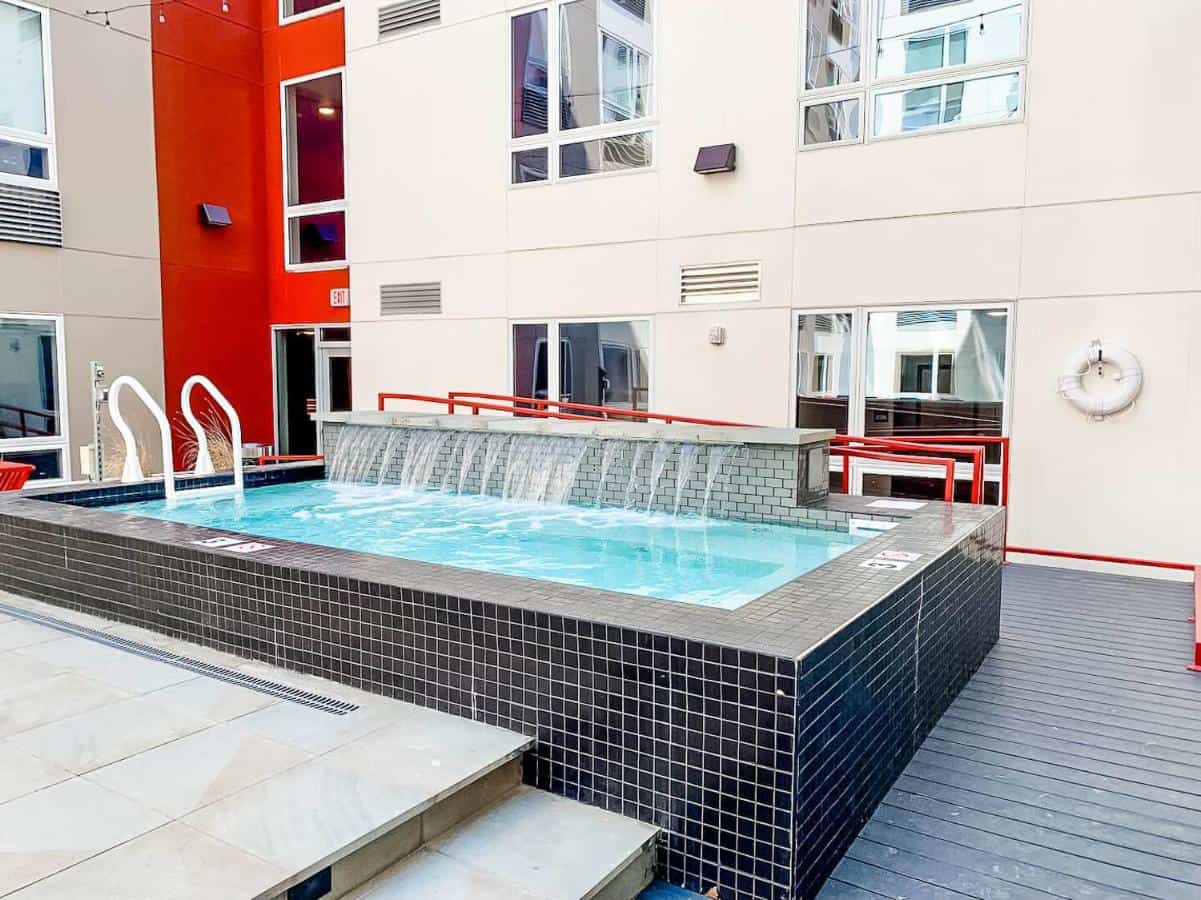 Stay in one of 20 fun and funky guestrooms featuring flat-screened televisions. Complimentary wireless Internet access keeps you connected, and digital programming is available for your entertainment. Bathrooms have showers and slippers. Conveniences include coffee/tea makers and desk chairs, and housekeeping is provided daily.

Take advantage of recreation opportunities such as a spa tub, or other amenities including complimentary wireless Internet access and a communal living room. With a stay at The Urban in Columbus (University District), you’ll be a 3-minute walk from Ohio State University and 11 minutes by foot from Ohio Stadium. 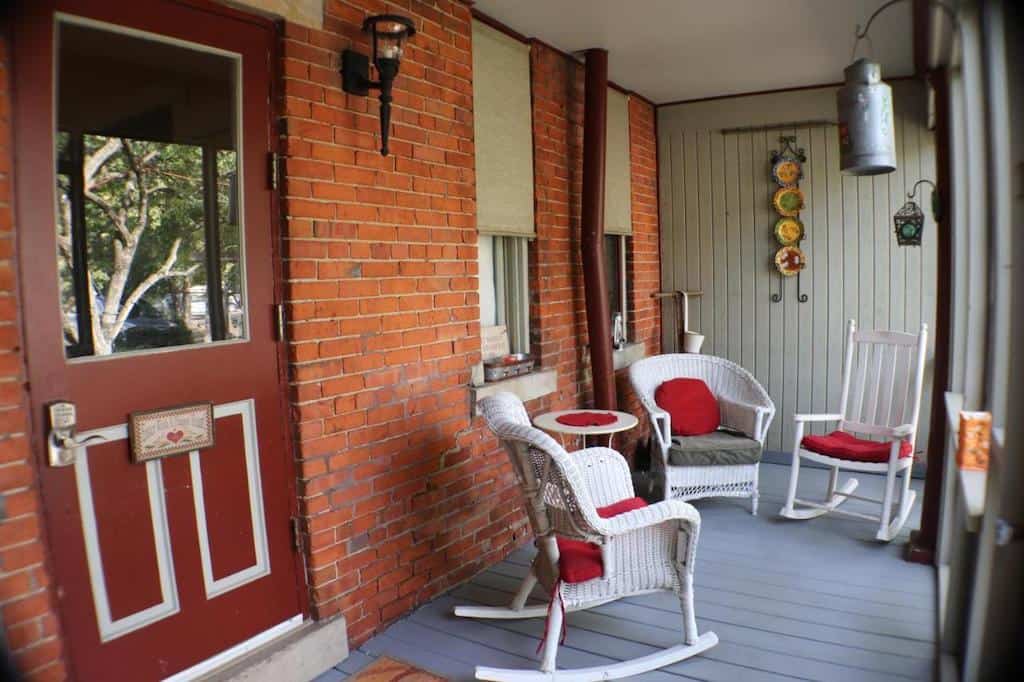 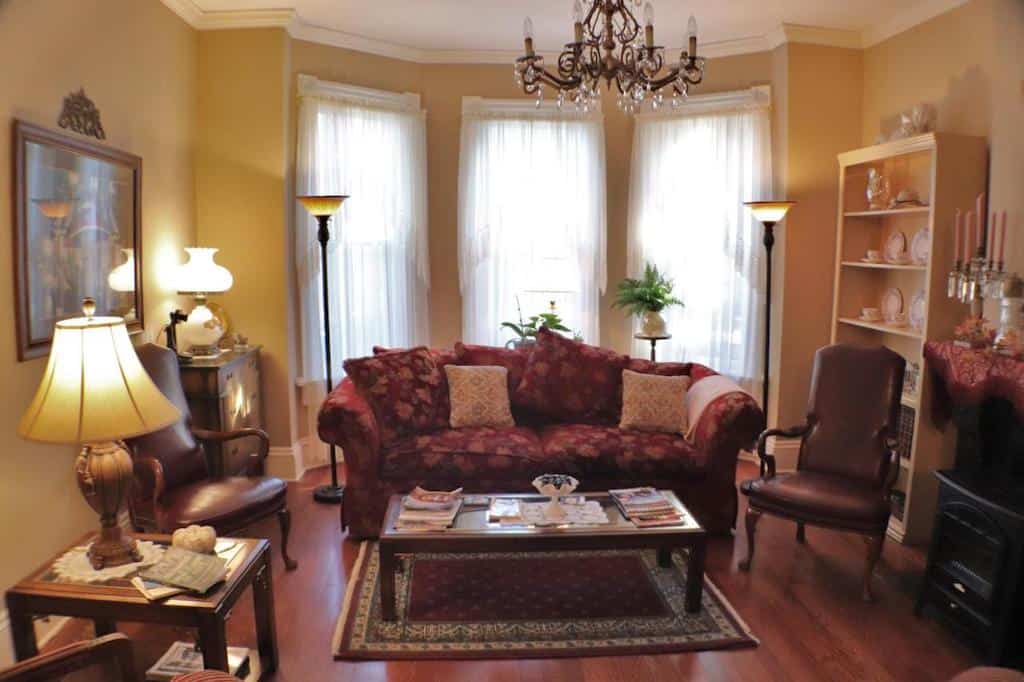 Situated in the trendy Short North neighborhood is the 50 Lincoln Short North Bed & Breakfast in Columbus. It is a newly renovated quaint and quirky Italianate-style B&B in one of the most attractive parts of town and starts at $148 per night.

Make yourself at home in one of the 7 individually decorated guestrooms. Rooms have private patios. Prepare your meals in the shared/communal kitchen. Complimentary wireless Internet access keeps you connected, and cable programming is available for your entertainment. Bathrooms have shower/tub combinations and hair dryers.