Portland is a great city with fantastic public transport, including buses, streetcars, and light rail. Sometimes, though, you might want to rent a car. Whether it’s for a day trip to Mount Hood, exploring the coast or the wine country or visiting the Columbia Gorge National Scenic Area, renting a car is necessary. Here is our guide to renting a car in Portland, Oregon including some of the best car rentals in the city…

Things to know about renting a car in Portland, Oregon 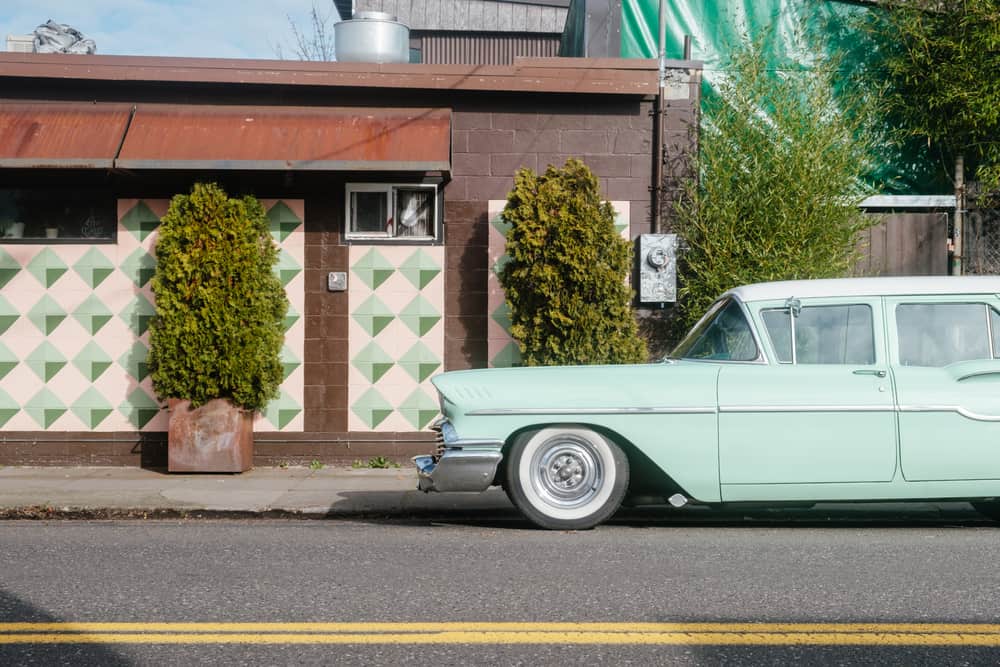 12 of the best car rental companies in Portland, Oregon

All major car rental companies have desks on the lower level of Portland International Airport (PAX).

You will find these companies at the airport:

As well as having a desk at the airport, there are other Avis offices in Portland. The most central is Portland Downtown Parking Garage, 330 Southwest Washington Street. Their phone number is (1) 503-227-0220.

Avis offers ten different vehicles ranging from a Toyota Camry (or similar) to a Standard Elite SUV like a Nissan Pathfinder. You’ll pay around $83 per 24/h for the cheapest car. Roadside assistance, car cover, liability, satellite radio, and hands-free navigation are all charged extra.

As well as an airport desk, Dollar Car Rental also has an office in downtown Portland situated at 132 NW Broadway. Their telephone number is (503) 228-3540.

Dollar has a range of cars, including the economy (from around $52 per day) to a minivan at around $236 per day. The initial rates you see on their website don’t include taxes, fees, or surcharges.

Enterprise has 13 different vehicle types ranging from the economy to pickups and beyond. Again, prices start from around $80 per day. But, again, the prices you see initially don’t include taxes and fees, so your $80 will be more like $100.

Enterprise has numerous sites around Portland, and many have great opening times. The most central part of downtown is at 445 SW Pine Street.

From a midsize Toyota Corolla, a sporty Dodge Challenger to an SUV, National Car Rental has many choices. Prices start from $93 per day. Included is unlimited mileage but no taxes or fees. If you want to add on a Loss Damage Waiver, you’re looking at an extra $28.

Alamo has 13 types of cars. The cheapest is a Mitsubishi Mirage or similar. At Alamo, they include a damage waiver, extended protection, unlimited mileage, taxes and fees in their advertising price. The cheapest car is $148, which isn’t bad considering you get all of those extras included. You can also save money on that figure by pre-paying.

Thrifty has a good range of cars ranging from a 4-seater Chevrolet spark (or similar), a Jeep Wrangler, a seven-seater van or a convertible. Even prices for the more luxurious cars seem much more reasonable than other agencies. For example, for a convertible, you’re looking at $120 a day, including fees and taxes, which isn’t bad at all!

Other companies in Portland include:

Zipcar will let you rent a car from all over Portland. You can drive it for as long as you want and then return it to a drop-off point convenient to you. It doesn’t have to be the place where you collected the car. The cost is between $0.35 and $0.49 per minute. To use the car, you don’t even need to pay for gas. However, there is an initial sign-up fee to become a member but no monthly or annual charge following this.

If you’re looking to hire a more luxurious car, this is the place to go. You can hire a BMWi8, Mercedes-Benz s600 Mayback, Chevrolet Corvette, Tesla Model Y, Cadillac Escalade ESV and many, many more.

The company can pick you up from the airport for a small fee. Unfortunately, unlike many of the other sites in Portland, you can’t book online, so prices aren’t available.

If you’re looking for something to accompany you on an adventure, Wandervans has a range of campervans for hire. Their Portland office is located at 1031 SE Madison St.

You can hire a 2-person camper van for as little as $99 per day, which is reasonable when comparing it to the cost of some of the other cars we’ve looked at.

Getaround is a car-sharing site – and so works differently. People can choose to share their cars or borrow from other people.

This is a van rental service rather than a car rental one – though they do have minimum rental times, you might not be able to rent a van for just one day.

This locally-owned auto rental place has a basic website but a good offering of different vehicles.

Driving in and around Portland

Major Freeways in and around Portland 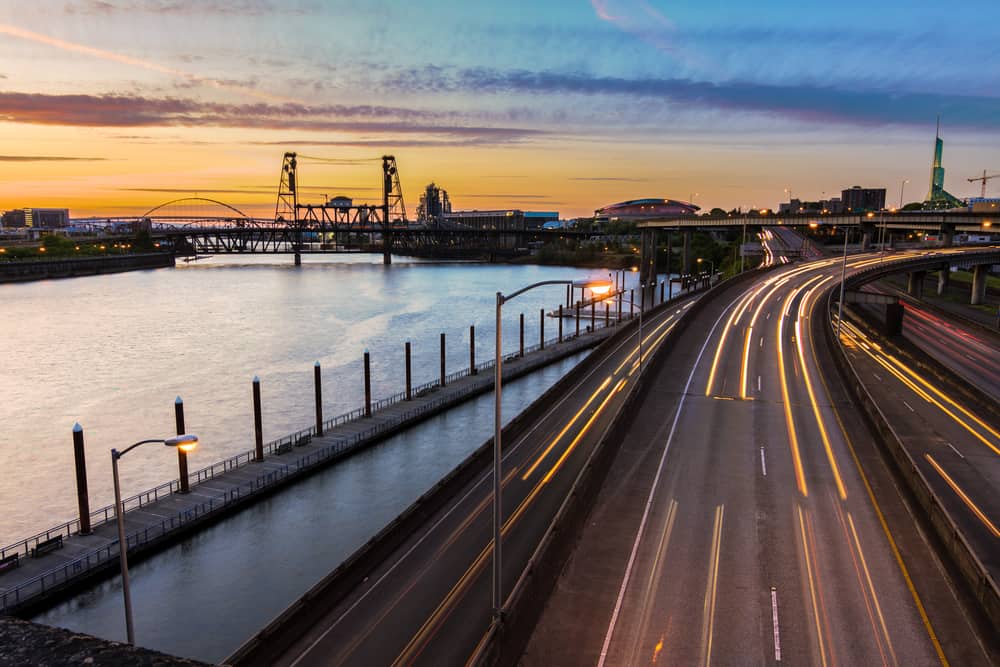 Interstate 5 circles downtown Portland. This is the main route from Canada to Mexico. There is also Interstate 405, which is a loop circling the Pearl District and downtown.

The Interstate 84 starts at I-5 on the inner east side of the city and travels east to the airport, which you can get to via Interstate 205. It then goes to the Columbia River Gorge, Idaho, and Utah.

Using a cell phone when driving

If you’re driving in Portland, you can only use a hands-free phone. For those under 18s, you are not allowed to use any communication device while driving, even with a hands-free accessory. It is illegal to use any cell phone that isn’t hands-free. 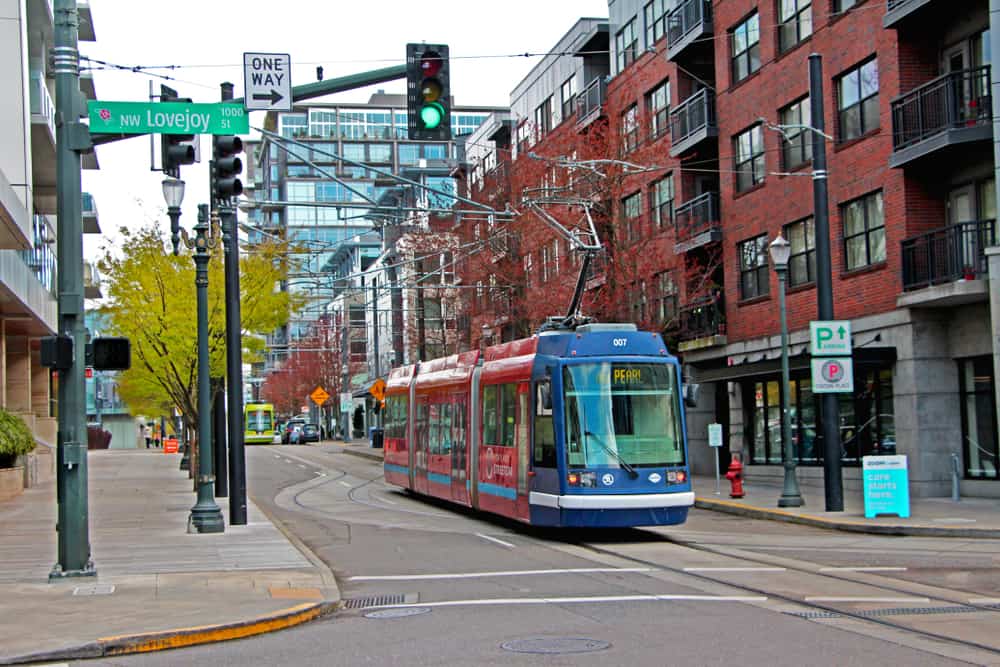 The Pearl District and downtown Portland have a lot of one-way streets. Be careful and look out for signs. Generally speaking, the streets will alternate in direction.

Another thing to be aware of is that while West Burnside Street does have two-way traffic, you cannot turn left. So for the left side of Burnside, you will need to take two right turns.

Sharing the road in Portland 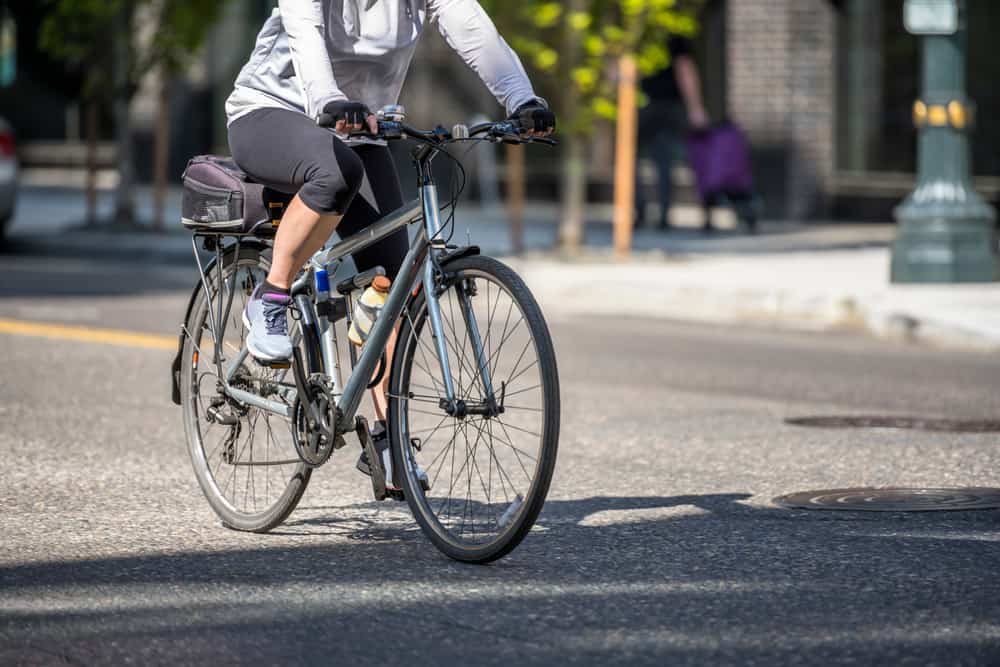 There are many bicycles on the road in Portland due to its gentle slopes, plentiful bike lanes, and moderate climate.

Sharing roads with bikes is often down to common sense and paying close attention to signs. Here are some useful tips when driving around Portland:

Traffic rules in Portland and the state of Oregon 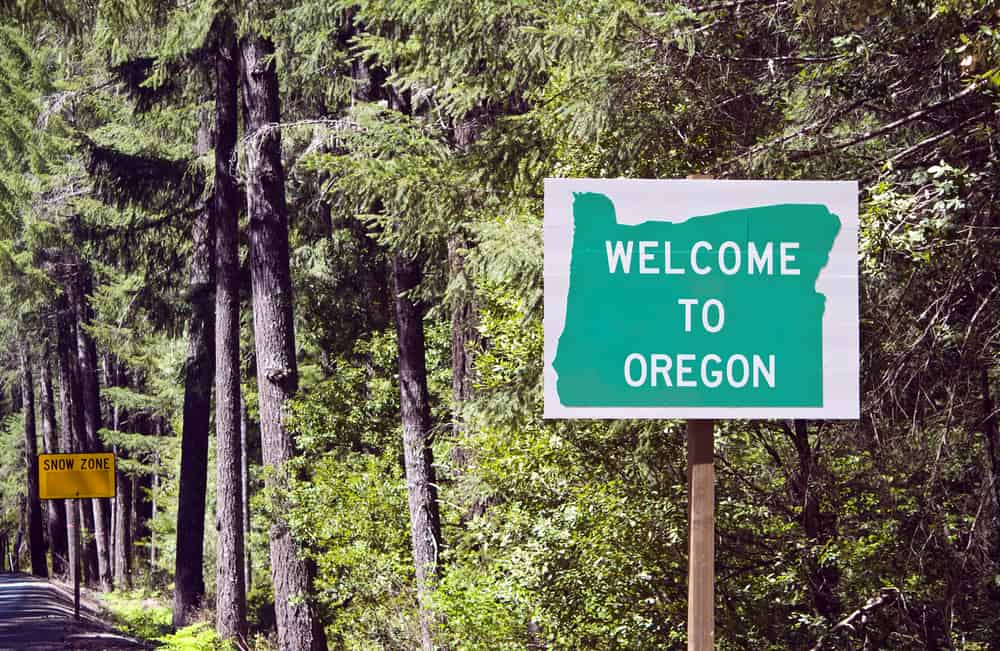 While many driving rules are universal across states and even across the world, there are some important ones that you need to know before you drive off the parking lot.

Where you can and can’t park 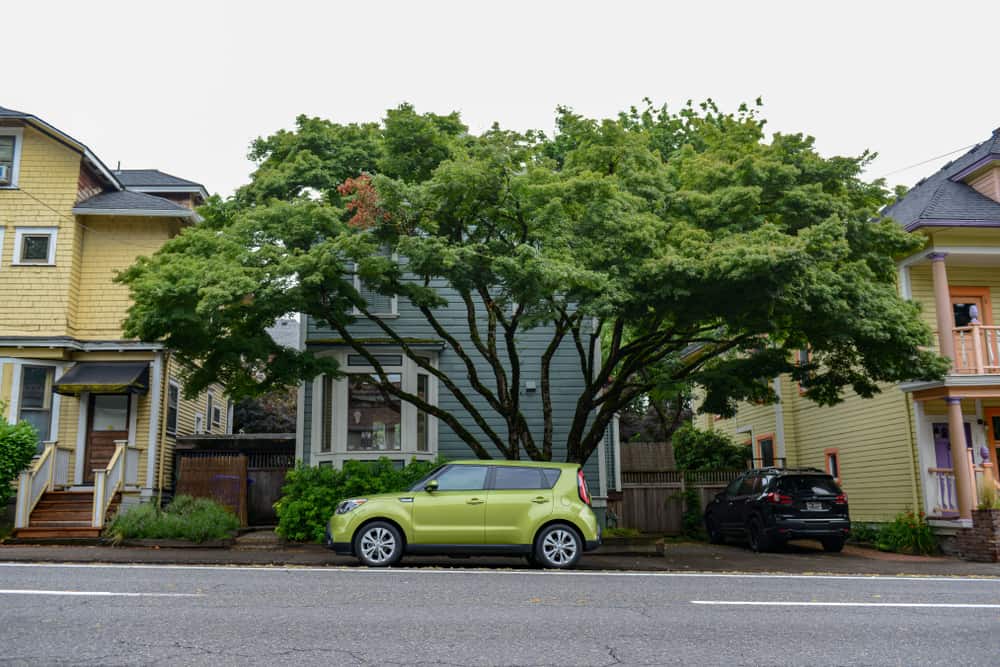 In downtown and central areas, parking is metered. There are cheaper park and ride systems if you don’t mind combining driving with public transport. Outside of central districts, street parking is free.

Electronic meters will take coins and cards. You must display your receipt in the curbside car window. If you move the car and it still has time remaining, it will still be valid. After 7 pm and before 8 am, you don’t need to pay for parking in most places. On Sundays between 1 and 7 pm, however, you are required to pay. Downtown fees are currently $2 per hour. You can find up-to-date fees here. You can also pay with Mobile Pay using Parking Kitty, the mobile payment app.

Top 15 of the Best Waterfalls in and near Portland

Top 18 of the Best Restaurants in Portland 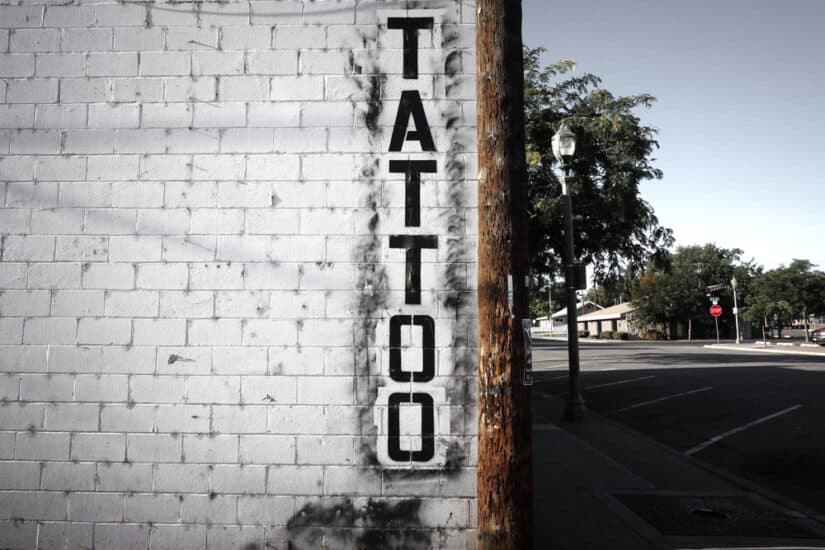 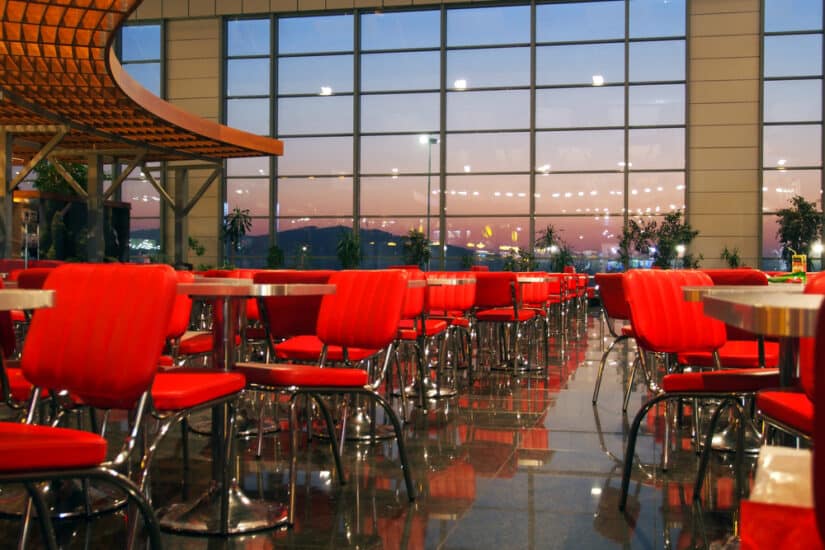 Top 15 Best Restaurants in or near Portland Airport 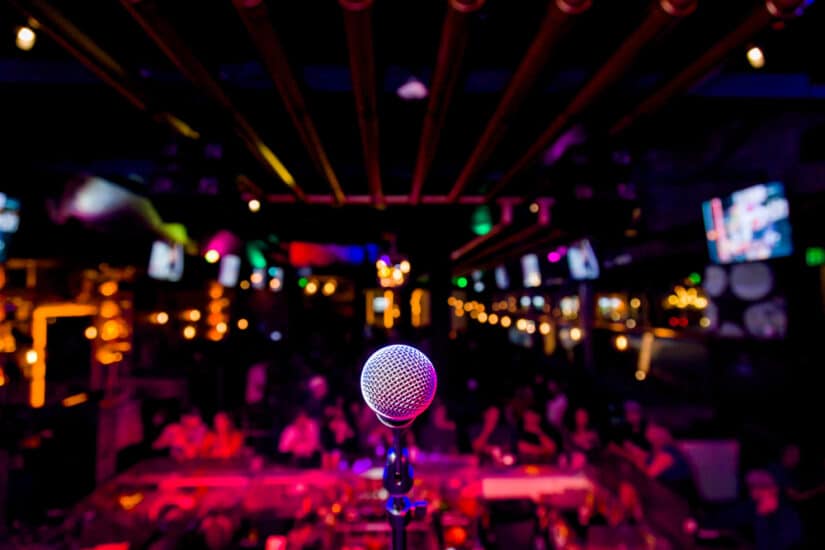