Whether you’re hankering after a pastrami sandwich with lashings of pickles, a veggie delight sub, or a totally gluten-free snack, there is something for everyone in Portland. Delis are a popular and healthier alternative to fast food for a quick bite made from scratch with your own choice of fillings. From 100% plant-based to something more traditional, here are some of the best delis in Portland, Oregon (in no particular order)… 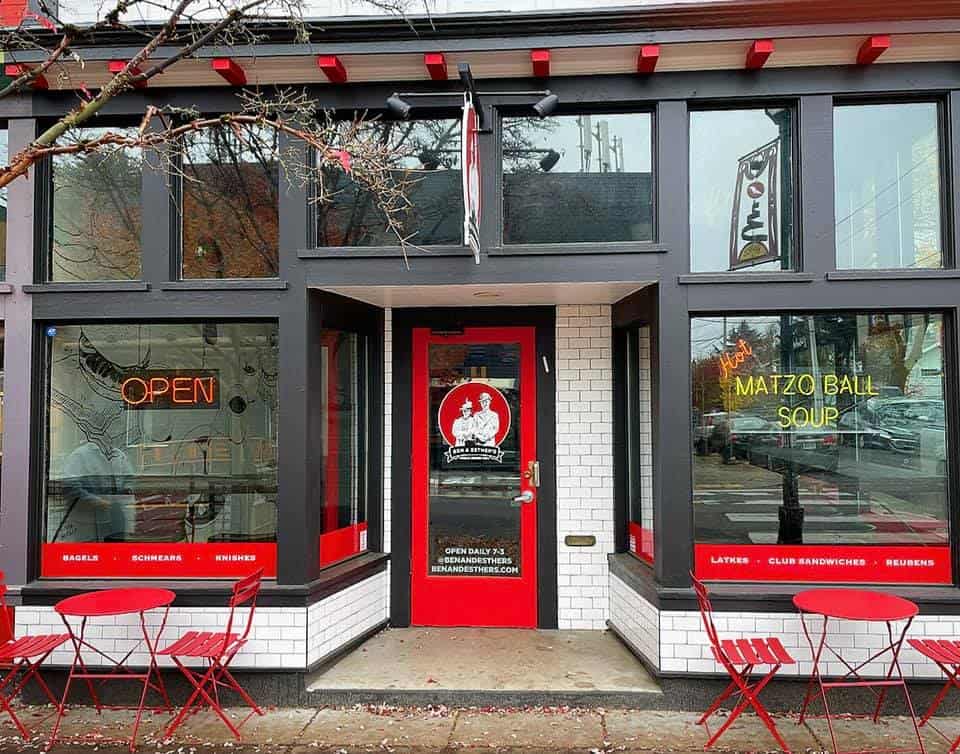 Ben and Esther’s Vegan Jewish Deli is located in the Roseway District is a 100% vegan deli that features “meats” made with plant-based alternatives.

Whether you want a delicious vegan deli sandwich, bagel sandwich, or a bagel with one of their many schmears, there is something for you to enjoy during any meal of the day.

Pick up and try some of their vegan chicken salad, egg salad, or lox. If you want something sweet to round out your meal, order the black and white cookies, raspberry jammers, or challah.

Elephants Delicatessen has been serving since 1979 with local food favorites that are always made from scratch.

With many locations throughout Portland to serve your needs, including one in the Northwest District, Elephants Delicatessen, they serve delicious originals for all meals of the day.

Order a sausage and potato frittata and a fruit and yogurt parfait for a well-balanced breakfast. For lunch, try the chicken pot pie, the veggie tikka masala, or the teriyaki chicken.

If you want some deli to take home with you, Elephants Delicatessen sells delicious meat and cheese boards for lunch or a special family event. Build-your-own-board features a baguette and your choice of one, three, or five types of cheeses. 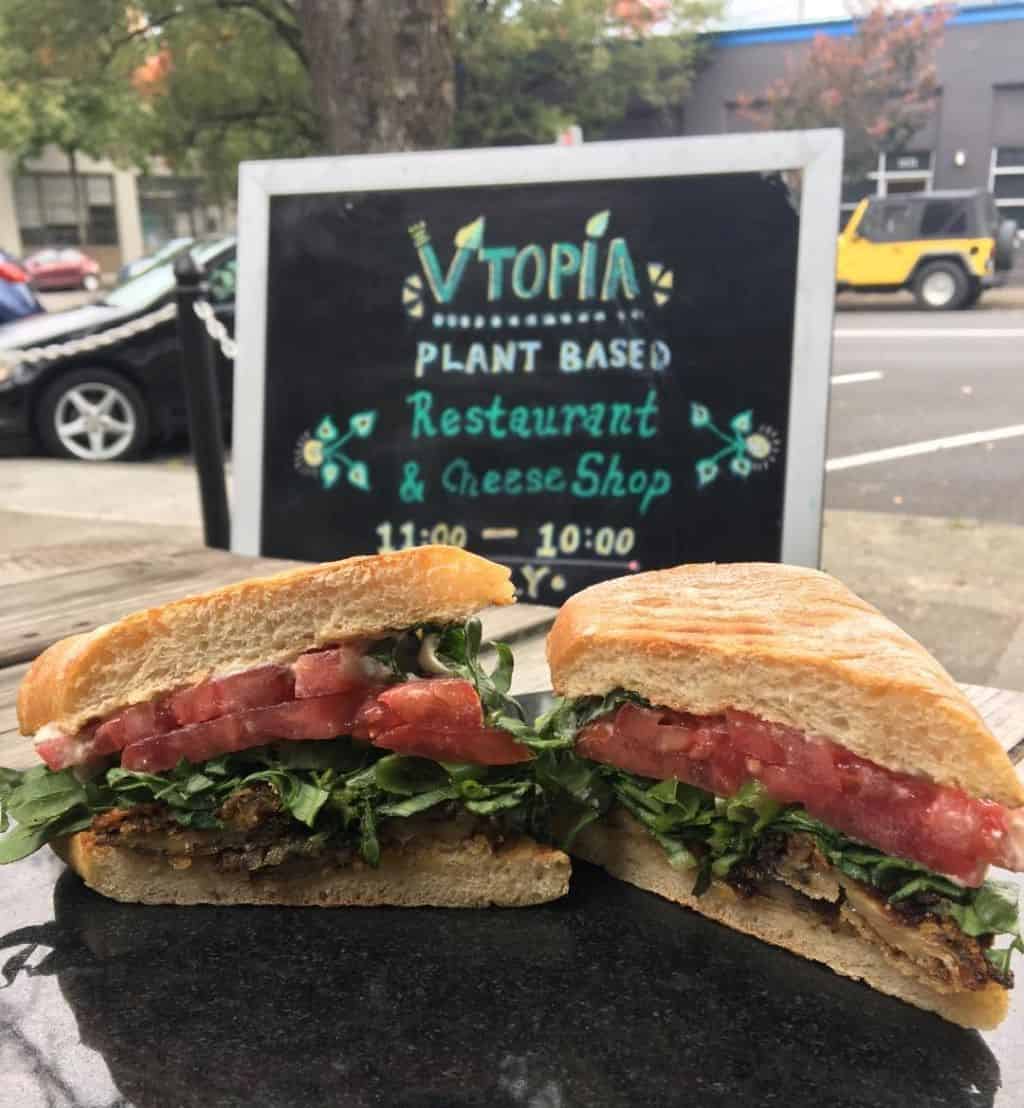 The Goose Hollow Foothills District is Vtopia’s home. Go to Vtopia to experience a full vegan restaurant menu and fully vegan cheese shop made with a cashew base.

Fru Fru Terra is now the new name of Vtopia according to their official website. However, their Google profile still says that they are named Vtopia.

Choose from one of their signature delicious vegan mac and cheese dishes to experience their vegan cheese first hand.

If you are sold on the vegan cheese scene, you can order them by the pound including port wine cheddar, pesto chevre, roasted garlic rosemary, bakeable brie, and more.

Downtown Portland’s Kenny & Zuke’s Delicatessen is well-known for their quality and fresh pastrami that you can order on the classic, veggie, or Rachel Reuben sandwiches. The Classic Reuben and the Veggie Reuben feature beef pastrami while the Rachel Reuben has turkey pastrami instead.

If you prefer to try something different, this deli is also known for their Overstuffed Sandwiches. Choose from Albacore Tuna Salad (costs a little extra to make it a tuna melt), Roasted Turkey, BLT, Veggie Delight, Deviled Egg Salad, and more!

5. East Side Deli on Hawthorne – offers the very best in meat, vegetarian and vegan sandwiches and salads

If you are in the Richmond District when you visit Portland, be sure to visit East Side Deli on Hawthorne.

What started as a take-out lunch shop in the summer of 2008 has turned into a local deli favorite for over the last 10 plus years.

Take command of your own lunch and build your own sandwich with your choice of meats, cheeses, veggies, dressings, seasonings, and bread. Some other sandwiches and salads are vegetarian and/or gluten-free.

Besides their location on Hawthorne Boulevard, there are two other convenient locations throughout Portland if you are nearby different districts during your visit.

Rad Magic Subs is located in the Parkrose District inside the Food Fight! Grocery at the address listed below.

They get their rolls from a local Xuyen bakery. Their subs are featured on a French roll with signature selections including Miracle Legion, Rad Rancher, and Rad Magic.

Cultured Kindness is another vegan cheese shop much like Vtopia (Fru Fru Terra).

Located in the Buckman District, you can choose from dairy-free and plant-based cheeses to take home, sandwiches to eat, and even vegan cheesecakes and other snacks.

Try their signature fig salami with fig and other natural flavors to make the product taste like salami.

Kornblatt’s Delicatessen is a New York style delicatessen that is situated in the Northwest District of Portland.

They use only the freshest ingredients from reputable sources. The fish they use comes fresh from the East Coast by plane every week without ever being frozen. This delicatessen also uses Hebrew National Salami as well as all beef hot dogs.

Disclosing their food sources to their patrons is the biggest reason that Kornblatt’s Delicatessen is one of the best delis in Portland.

Situated in the Old Town District, some of their signature sandwiches include the Italian Job with genoa salami, mortadella, and provolone, the Turkey and Genoa Salami, and The Charlie’s Reuben with traditional corned beef and Swiss cheese.

If you need something fresh for your hearty sandwich, choose from the Turkey Caesar Salad or the House Salad. If you prefer something warm with your sandwich, ask about their soup of the day.

Choose from specialty sandwiches such as the Reuben, the Rachel, Grilled Ham & Cheese, Tuna Melt, or the Classic B.L.T. Aunt Tille’s Special is composed of pepperoni, salami, pepperoncini, lettuce, tomato, turkey, red onion, mayo, and Parmesan cheese all sandwiched together on a French roll.

At the end of their official website’s menu, take a look at their Yelp reviewers to get a preview of what are the best dishes to taste.

Elephants on Corbett is South Portland’s Elephants Delicatessen location that is known for its delicious weekend brunch options.

If you are on-the-go during the week, you can also pick up pre-made sandwiches, salads, fruit cups, and other delicious ready made entrees and snacks. You can grab the food you need and then get back to what you are doing.

Look for the symbols on their everyday menu to find what dishes are wheat-free, gluten-free, dairy-free, or vegan so that you can stick to your special diet, if applicable.

Devil’s Dill Sandwich Shop has unique sandwiches that offer vegetarian and gluten-free options for the customers that need it most.

In business for almost a decade, their signature sandwiches are numbered on the menu as so: Pulled Pork is No.1, No. 2 is BKAT (bacon, kale, avocado, tomato), the Italian is No.3, No. 4 is Braised Beef all the way to No. 9. No. 7 is seitan sandwich which serves as their vegan and gluten-free option.

Theo’s Deli is not just a deli, but a diner that serves burgers, sandwiches, salads, and other popular American food fare.

Their motto says, “Dig in. Make your stomach happy”.

They have 3 types of a signature sandwich that they featured called the Wafflewich with food sandwiched between two waffles. That’s a different way to eat an everyday sandwich!

Their deli sandwiches include Classic Turkey Cranberry, Turkey Avocado, Roast Beef, Italian, and Vegetarian. You can order them as a whole sandwich or a half of a sandwich. Half sandwiches allow you to pair with soup or salad so that you do not feel too full.