Coquine is a top-tier American restaurant found in southeast Portland on Belmont Street. It has an exquisite menu that will fulfill all your fine dining desires.

From snacks to four-course meals, everything is available at Coquine. Their oyster hour offers some great options like different oyster pairings along with snacks that include Chickpea Socca and hand-cut french fries, among other options. The dinner menu includes a Four-Course “Chef’s Choice” Menu, the Seven Course Tasting Menu, and Family Style Chicken Dinner.

Coquine is one of the more premium American restaurants in Portland and stays open only from Wednesday to Saturday from 5 to 10 pm.

2. G-Love New American Kitchen – a New American restaurant where vegetables are served as mains and proteins as side dishes

The menu offered by the restaurant features everything from wines and cocktails to proper meals and desserts. The side dish menu offers some great options like Fingerling Potatoes, Cheesy Toast, and Focaccia Di For Maggio. Charred Hanger Steak, Fried Chicken, Chirashi Bowl, and Olde Moon Carrots are some of the many dishes offered by G-Love New American Kitchen. Milk Chocolate, Coconut Cloud, and Whip-A-Licious make up their dessert menu.

Open from 4 to 9 pm all days of the week, except for Mondays and Tuesdays, the restaurant offers dine-in, takeaway, and delivery.

Their menu consists of breakfast specialties like Breakfast Burrito, French Toast, Tofu Rancheros, and Pancakes, among several other options. The House Specialities offered by Cheryl’s include Fish Tacos, Flat Iron Steak, Quesadilla, Chargrilled Salmon, and the Vegan Smothered Chopped Steak. You can also get a wide variety of cold and hot sandwiches combined with different beverages. 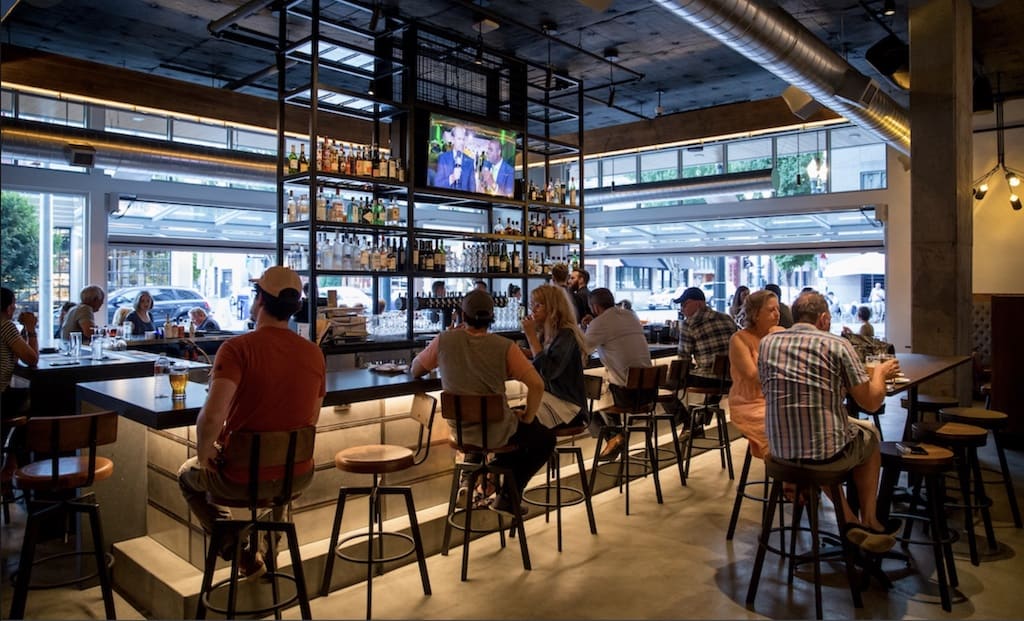 Located on Everett Street in northwest Portland, Tanner Creek Tavern is a New American Restaurant with a bar and some great cocktails.

Their starters menu includes some delicious snacks like Fried Chicken Fingers with Homemade Ranch, Tender Fried Calamari with Chile Mayonnaise, and Meatballs with Marinara and Mozzarella. Goat Cheese Stuffed Chicken with Quince Sauce and Spinach, Tavern Burger with Aged Cheddar, and the Tavern Burger are some of the mains you can try at Tanner Creek Tavern.

The restaurant stays open all 7 days of the week from 4 to 10 pm.

5. Firehouse Restaurant – a New American restaurant with wood-fired pizzas and other dishes in

Based in northeast Portland on Dekum Street, Firehouse Restaurant is a new American restaurant that serves some of the best wood-fired pizzas in town.

Margherita, Sausage, Roasted Mushroom, and New Haven White Clam are the flavors of Pizzas and Pizzettes that you can find at the establishment. Firehouse also makes great handcrafted pasta like Baked Penne Pomodore and Beef Bolognese. Cauliflower Steak, Wood Grilled New York Strip, and White Roasted Trout are the entrees that you can find there. 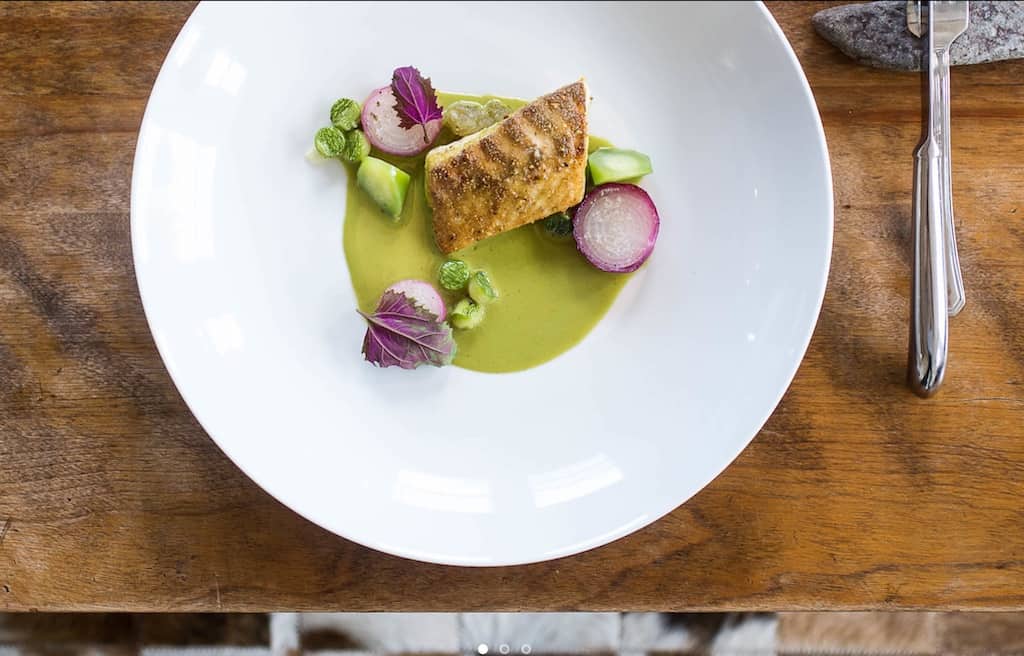 One of the best places to fine-dine in Portland, Willow Restaurant, can be found in southeast Portland on 11th Avenue.

Roast Chicken, Malfatti, Broccoli Veloute, Charred Green Beans, Creamsicle French Toast, and Mackerel Escabeche are some of the many offerings of the restaurant. You can pair your food with some classic wines from Italy that include Cantina Andriano Pinot Blanc and Zanchi ‘Flavo’ Malvasia. 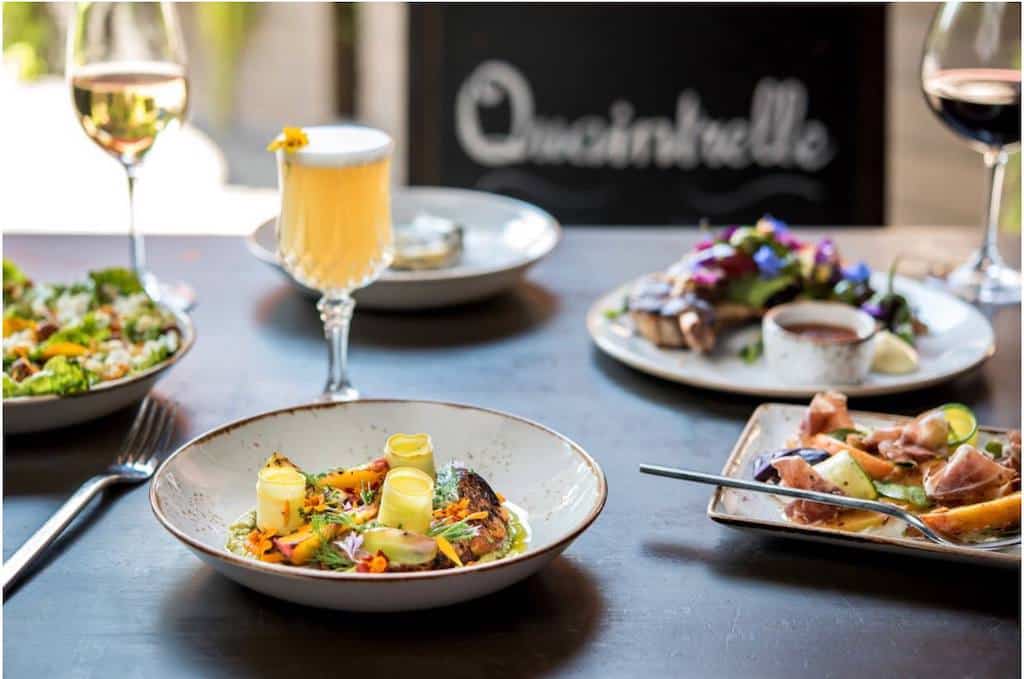 Quaintrelle is located in southeast Portland on Clinton Street. The restaurant is famous for its unique menu options and cocktails.

The Chef’s Tasting Menu has been recommended by every customer who has tried it and is among the best offerings of Quaintrelle. Other than that, there are a number of other menu options to choose from like the Smoked Duck, Steak n’ Chz Beef Tartar, and Bay Shrimp along with numerous vegan-friendly choices.

Qui Vivra Verra, Prohibition Punch, and Mystical Aperture are some of the many cocktails you can find at the restaurant.

Quaintrelle stays open from Wednesday to Sunday from 5 to 8:30 pm.

Located on Broadway in southeast Portland, Higgins is a classy restaurant that offers amazing new American Food and comes with a bar.

The Fireside is a top-rated new American Restaurant that can be found in northwest Portland on 23rd Avenue.

With a huge menu that offers everything from small plates and salads to sandwiches and entrees, The Fireside is full of unique options to choose from. Cruise, Fireside Mac & Cheese, Grilled Grand Central Como Bread, Grilled Rustic Kale Salad, and Fireside Wedge are some of the best small plates and salad options. Their sandwiches and entrees menu includes Dick’s Burger, Orecchiette Pasta, and Braised Short Ribs.

Open from 3 to 10 pm on weekdays and 10 am to 10 pm on the weekends, The Fireside offers dine-in and takeaway services. 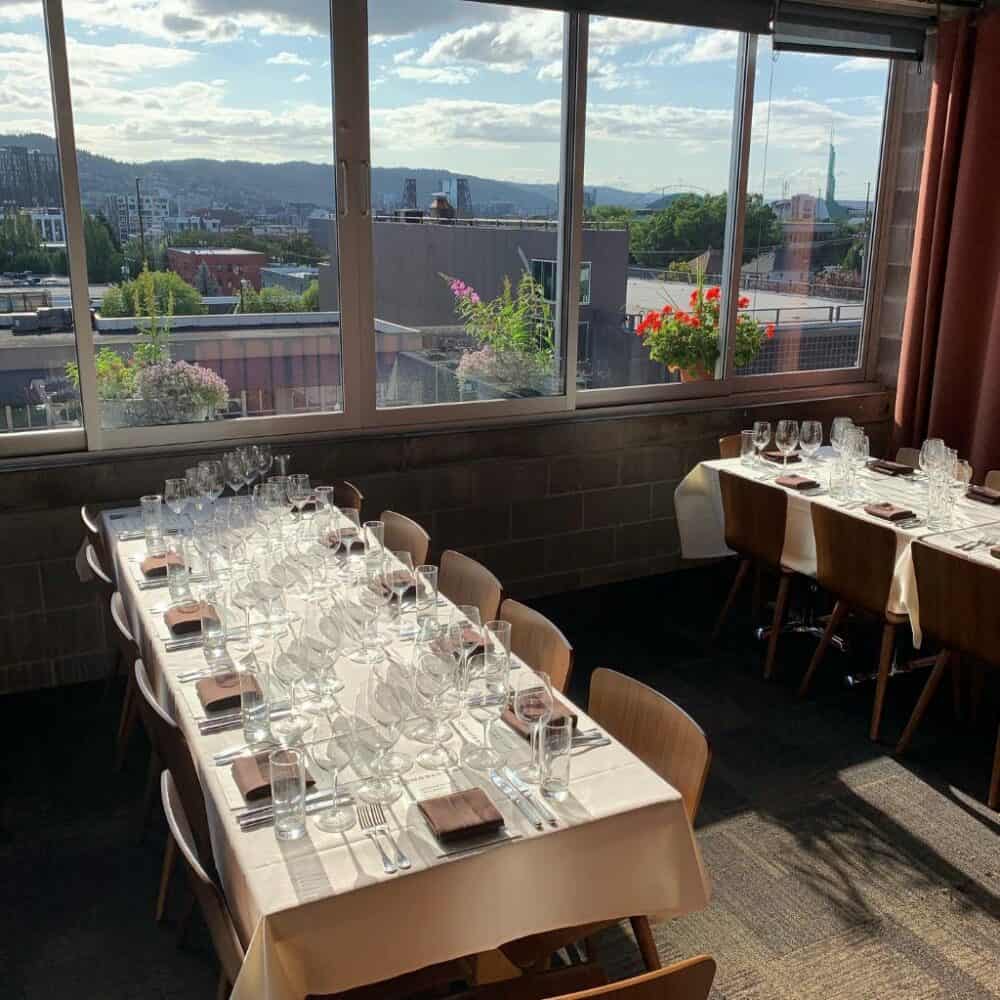 If you’re in the mood for a salad, you can try their Noble, Endive, or Turkish Kale Salads. Grilled Octopus, Fried Brussels Sprouts & Cauliflower, Mac & Cheese, Stuffed Squash, Idaho Rainbow Trout, and Ribeye, along with Hamburger, are some of the many options available at Noble Rot.

The restaurant stays open from 5 to 10 pm from Tuesday to Saturday.

Brix can be found on Hoyt Street in northwest Portland. It is a great option for anyone looking to enjoy a delicious meal while watching their favorite sport.

Along with options for lunch and dinner, they also have options for brunch, which include different types of egg benedicts, omelets, and breakfast favorites like Fried Chicken & Eggs, Chicken & Waffles, Farmers Breakfast, and Brix Waffle Breakfast, among others. Turkey club Sandwich, Halibut Tacos, Rare Seared Ahi Tuna, BBQ Chicken Pizza, and Mushroom Swiss Burger are some of the many choices available on the Brix lunch and dinner menu.

12. Swank Restaurant – a stylish spot in the Paramount Hotel features a New American restaurant and a whiskey bar

Located in the Paramount Hotel on Taylor Street, Swank Restaurant is a New American Restaurant with its very own whiskey bar.

Deviled Eggs, Chicken Sliders, Meat & Cheese, Smoked & Fried Calamari, Pimento Fritters, and Tavern Fries are some of the options you will see on their shareable menu. Seared Pork Chop, Grinder, Cubano, Pork Belly, and Tavern Burger are among some of their best offerings. If you’re in the mood for desserts, you can try their Brown Butter Apple Crumble, Cheese, and Chocolate Ganache Cake.