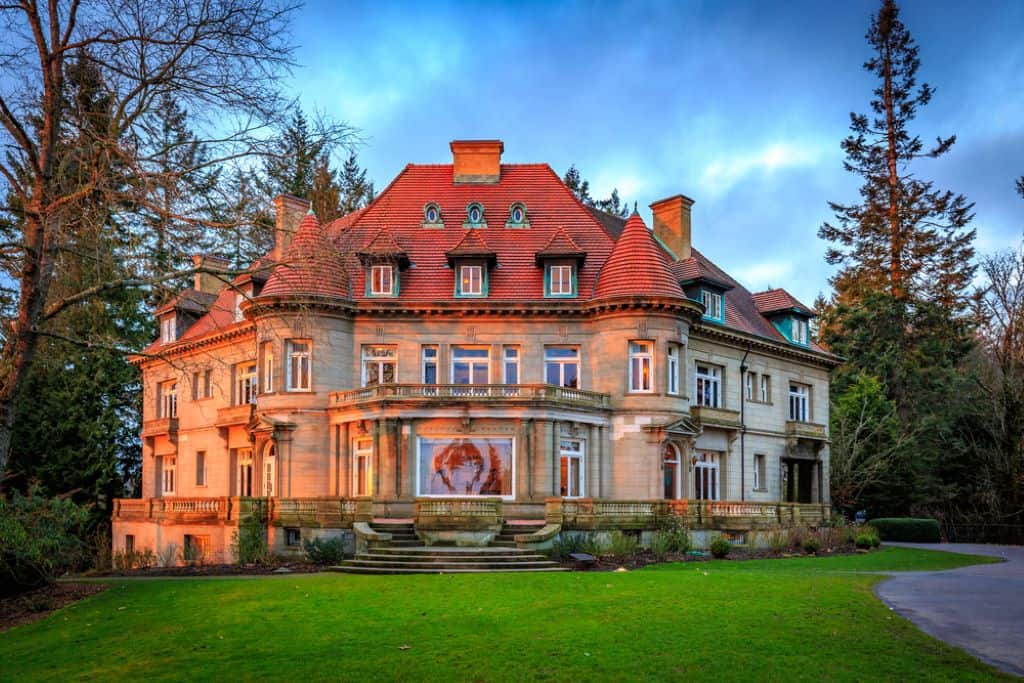 If you’re the nostalgic type there are plenty of places that will give you a taste of how the city looked many years ago.

From historic water fountains and elegant mansions to retro pharmacies and old-school theaters, here are the best places to experience Old Portland in the much-loved Oregon city…

1. Fairley’s Pharmacy Inc – an independently owned pharmacy which  dates back to 1913 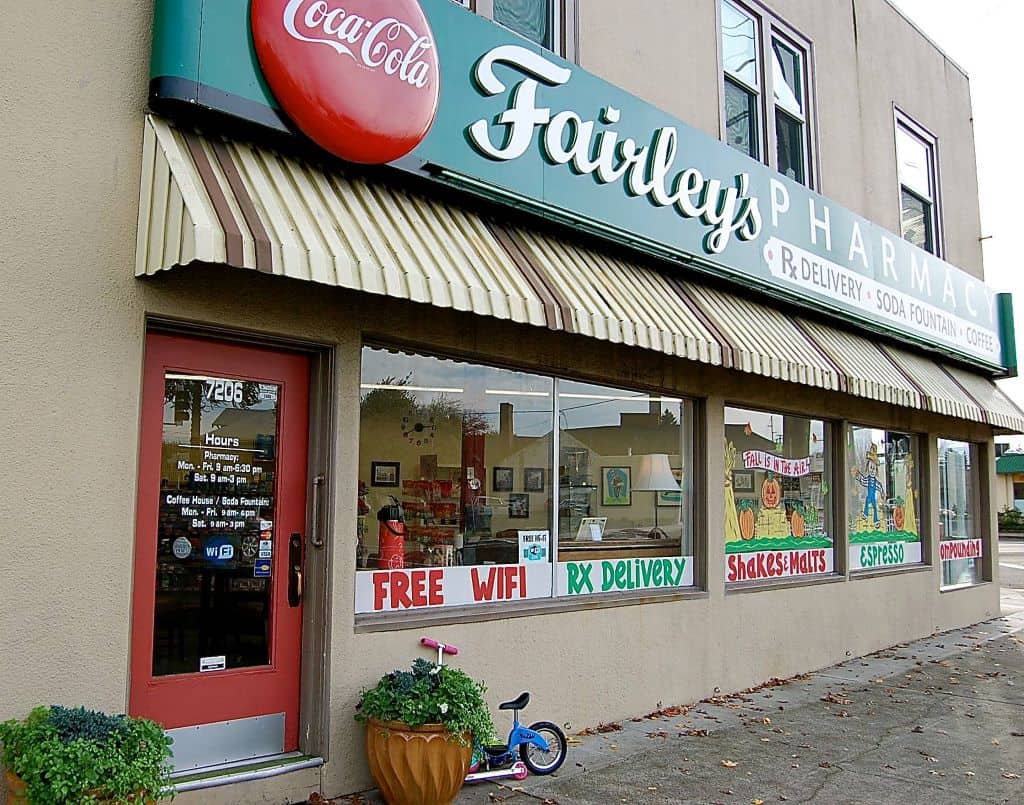 Fairley’s Pharmacy has been a staple of the North Portland community for decades. This family-owned and operated business offers a wide selection of products, all at affordable prices. As a result, they have become one of the most popular pharmacies in the area.

In addition to their great customer service and variety of products, they also offer a rewards program that offers members amazing discounts on purchases.

The speciality of the Fairley’s Pharmacy is its soda fountain that offers unique blends of espresso and baristas. The pharmacy stays true to its 19th-century origin and sells old-fashioned sodas, milkshakes, and other medical items that you would expect of a pharmacy.

When you visit the pharmacy, you’ll be surprised to learn that the building dates back to 1913 and since then has been redecorated and renovated so it still radiates a retro and nostalgic vibe. 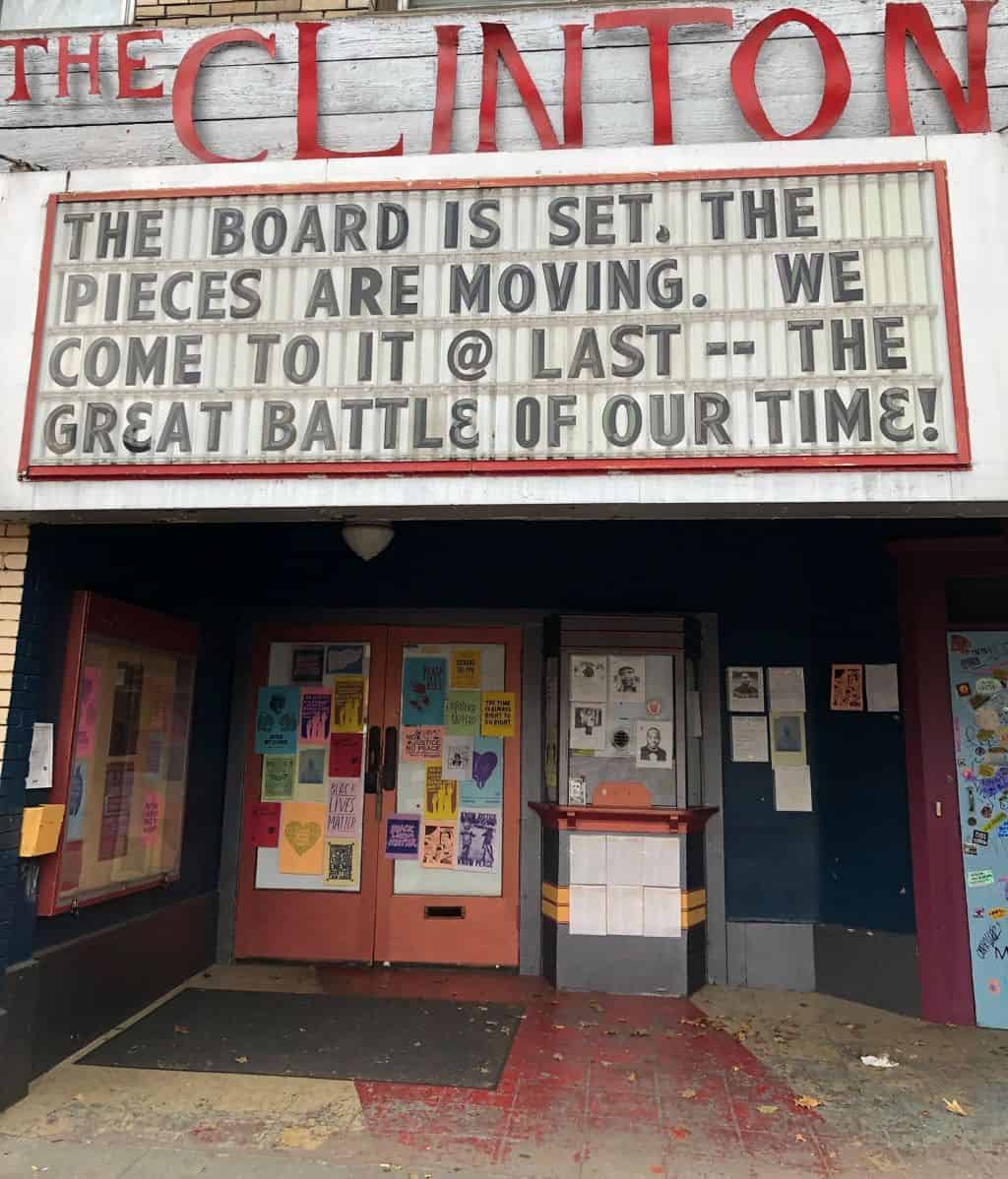 Clinton Street is known for its diverse neighborhoods, thriving industry, and eco-friendly initiatives. Its bustling downtown reflects the energy of the city with its hip coffee shops and trendy restaurants.

The Clinton Street Theater has been a pillar of Portland culture for over a hundred years now. Today, it’s home to many productions that bring together people of all backgrounds.

Originally called the 26th Avenue Theater, it was founded in 1915 by artists to showcase experimental theater and performance art. The building was put in place by the famous architect Charles A. Duke.

The theater continues to showcase plenty of these masterpieces to this day but has also opened its doors to other types of performances. They are committed to providing a space for artists and audiences alike to explore and enjoy the performing arts and their community.

3. Huber’s Cafe –  a lovely coffee spot which is Portland’s oldest restaurant and bar

Huber’s Cafe is Portland’s oldest restaurant and bar, established in 1879. It has undergone many changes over the course of its history but has always remained a staple of the city’s downtown scene.

From its humble beginnings as The Bureau Saloon on Morrison street, Huber’s Cafe has since become one of the most popular restaurants in Portland by offering diners an eclectic fusion of old-world beer hall fare with classic American favorites.

It is open for breakfast, lunch, and dinner 7 days a week, as well as for late-night drinks at the bar. The restaurant serves traditional American lunch fares like salads, sandwiches, Smoked Turkey, and Chicken Quesadilla, chicken and beef steaks, pasta, soups, coffee, beers, and mouth-watering dessert items.

Its specialities include Spanish coffee and roast turkey.

4. Pittock Mansion – one of the finest museums in the heart of Old Portland 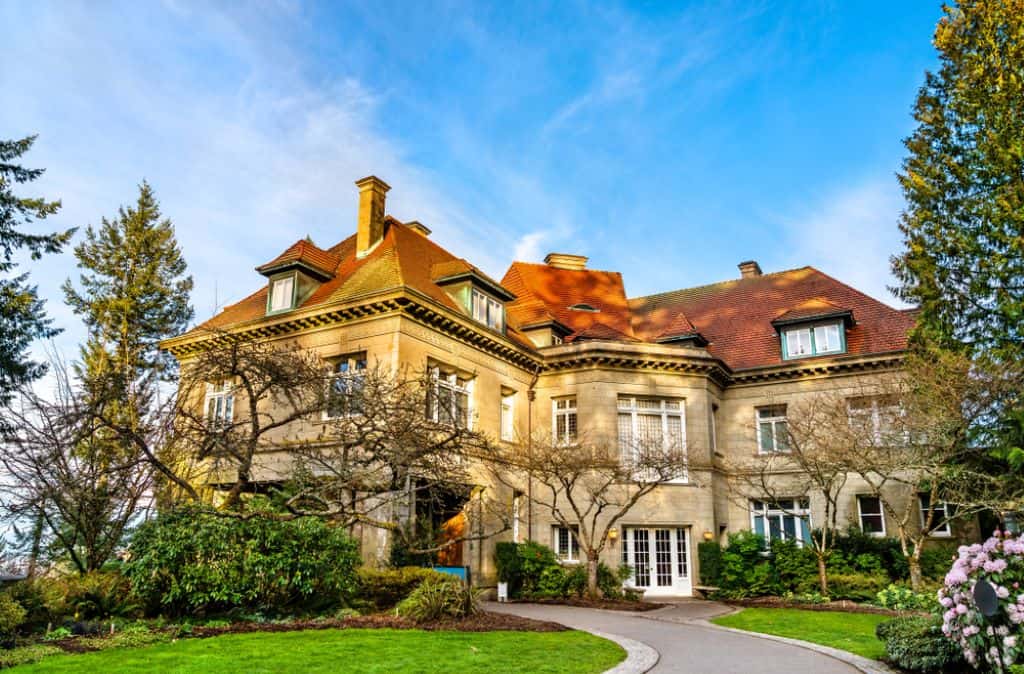 When it was first constructed, the Pittock Mansion in Portland, Oregon, was one of the most opulent homes in the city.

Originally commissioned in 1914 as private property by the famous publisher Henry L. Pittock for himself and his wife, the mansion is made of Tenino sandstone and brick exterior with a variety of landscape gardens forming a perimeter around it.

Even though it is over 100 years old, the Pittock Mansion has withstood time by being preserved and upgraded with modern amenities.

The original Pittock mansion has been a landmark of Portland for over a century and is now a National Historic Place that is open to the public year-round. The Mansion sits atop a hill that overlooks downtown Portland.

This renaissance French-style building is one of the best places to experience Old Portland and a must-visit for anyone looking to explore the city’s history. 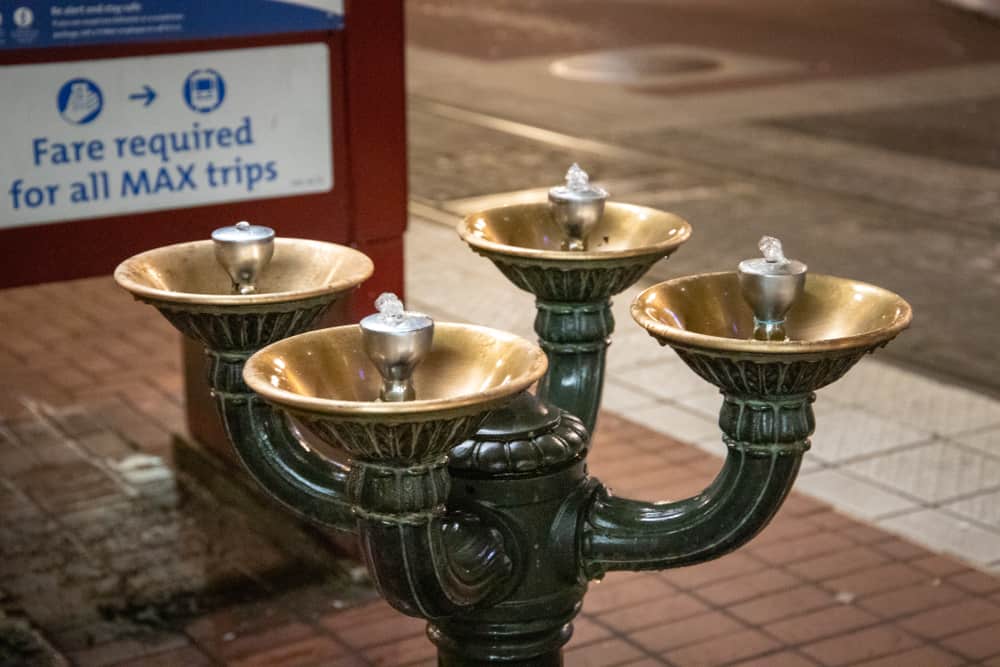 Bubblers are a type of communal water fountain with a few key differences. The Benson bubbler is a significantly old development, and its design resembles that of the common Victorian gilded-age drinking fountain.

Benson Bubblers started appearing in Portland in 1910 when a philanthropist and business tycoon Simon Benson invested thousands of dollars into manufacturing drinking fountains for the population.

The Bubblers were designed by the popular architect of the time, A. E. Boyle.

Currently, there are a whopping 52 Benson bubblers across Portland. While you’re in Portland, maybe stop by one of the Benson Bubblers and enjoy the sweet water of the drinking fountain.

Do not worry though, the nozzles of the bubblers are one of the most sanitary, germ-free surfaces in the city and the water is completely safe for drinking up to this day.

6. Heathman Hotel – one of the most famous and exquisite hotels in the area

Located in the heart of downtown Portland, Oregon, the Heathman Hotel is a hot spot for both business and leisure travelers. With multiple award-winning restaurants on property, including several vegetarian options, it’s easy to find something new to try with every visit.

An A-list hotel with sweeping views of the majestic Mt. Hood, this is one of the city’s most iconic destinations. Originally opening in 1927 as a residential inn for railroad men, today, the Heathman offers 151 luxury guest rooms, each with an interior designed by famed Portland architect DeYoung & Roald.

A new modern lounge offers respite from urban life and includes chef-driven menus that change seasonally or with availability.

Although this hotel is a hundred years old, much of it has been remodeled to include all the modern amenities that any other 5-star hotel offers. Rooms include wifi, LED screens, well-lit bathrooms, air conditioners, and mini-fridges.

It has been rated one of the best places to experience Old Portland by visitors on Booking.com.

7. The Old Church – a gothic venue that welcomes all ages and groups 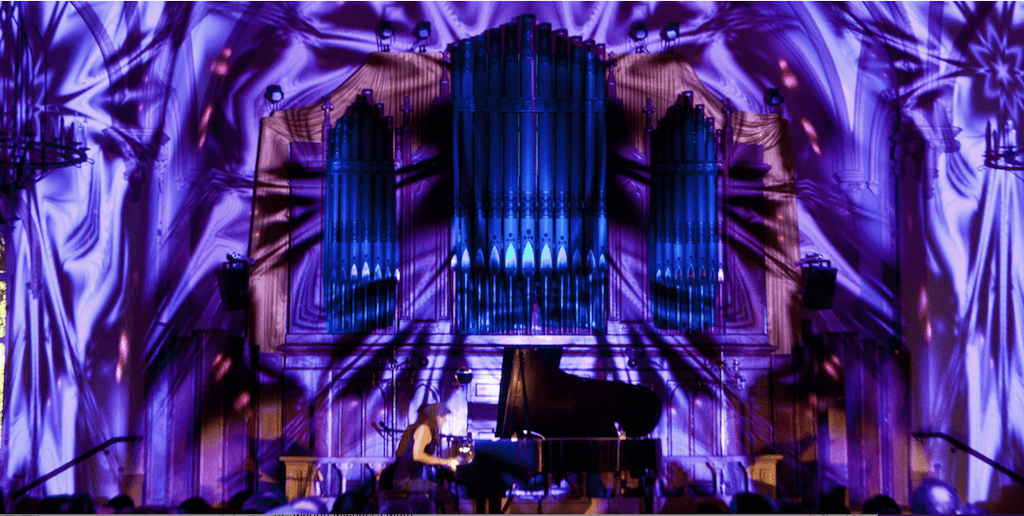 The oldest church in Portland is an interesting study in architecture. It was built in 1883 and the design on the exterior is a mix of Gothic and Classical styles.

The building features a steeple, stained glass windows, and a round tower. Soon, it became the city’s first designated historic site that has been preserved for its architectural and religious significance.

Some of the most beautiful architecture in Portland, Maine, is found within the old stone church on High Street.

In addition to its religious significance, the church has been featured in many paintings by local artists and photographers, which is why it’s often considered one of the most important buildings in town. 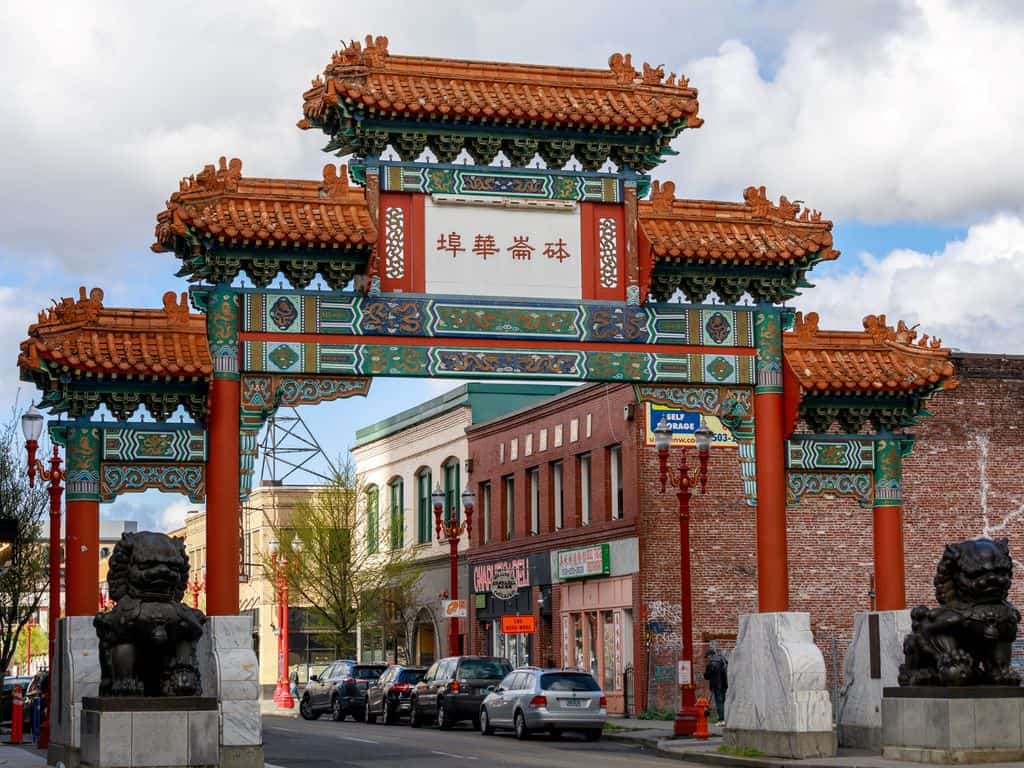 The most well-known tourist destination in Portland is Old Town Chinatown. There are many shops with items from Chinese culture that line the streets, and since it is located right next to the river, there is a panoramic view of the skyline.

In this area, find also the Shanghai Tunnels and the Portland Chinatown Museum which are the highlight of the place. At this historic place, there are plenty of opportunities for food, shopping, and entertainment.

9. Skidmore Fountain – a notable fountain that is a national historic landmark 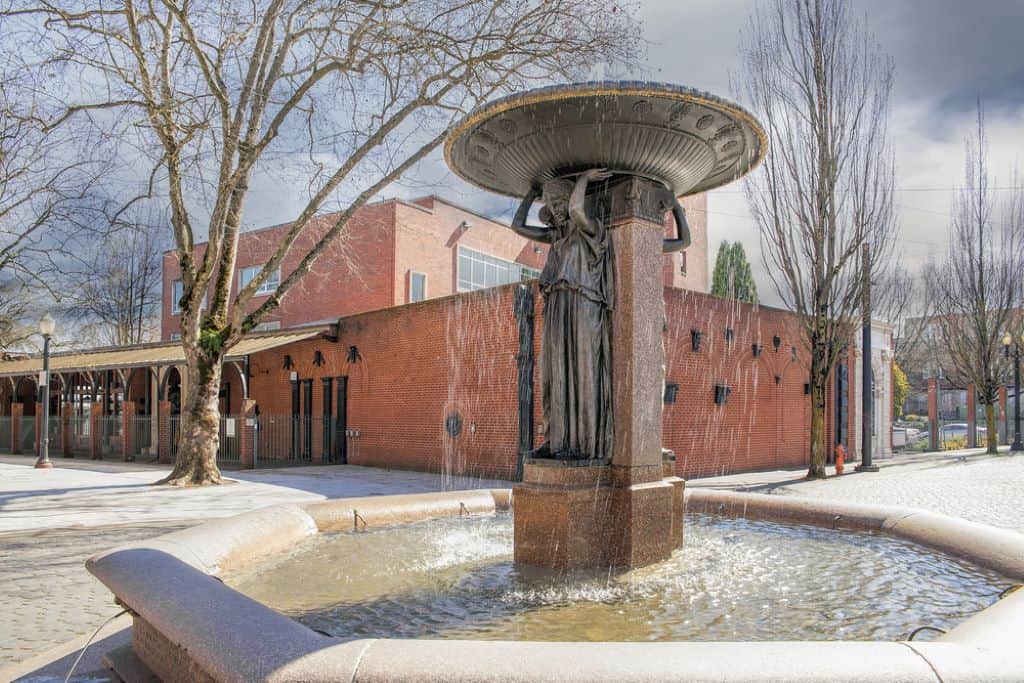 The Skidmore Fountain in Portland is one of the city’s most popular tourist destinations. This historic fountain was built in 1888 as a tribute to the National Historic Landmark of the Skidmore district.

It stands at the intersection of W Burnside St & Ankeny. The fountain sits atop a cast-iron pedestal with large ornate columns on each side, which were designed to resemble Vignolasque stone columns found in Italy.

10. The Park Blocks – one of Old Portland’s most popular destination 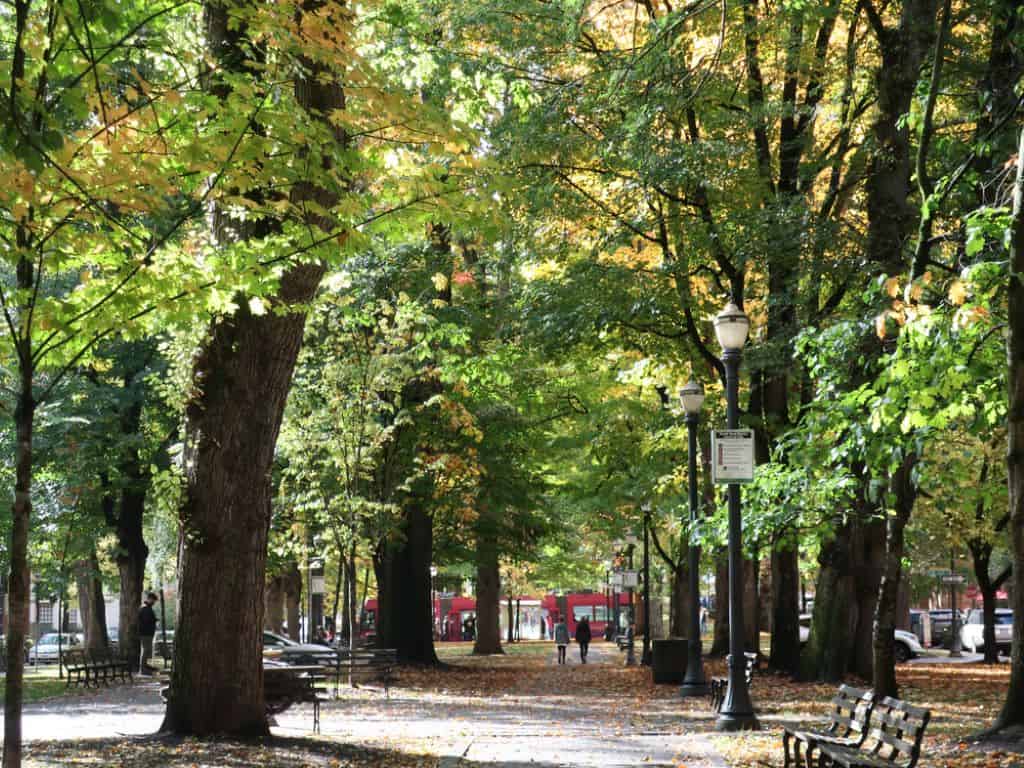 Portland’s Park Blocks are a compact section of downtown that has been transformed into a public park. Located behind the Portland Art Museum and in between two historic hotels, the blocks provide a pedestrian-friendly space for people to gather and socialize.

The beauty of the Park Blocks is all in their simplicity: they’re filled with trees and benches and lined with brick paths. They are one of the best places to experience Old Portland and take some aesthetic pictures for your gram while you’re there.

11. The Grotto – a sacred spot where you can enjoy nature and its scenery 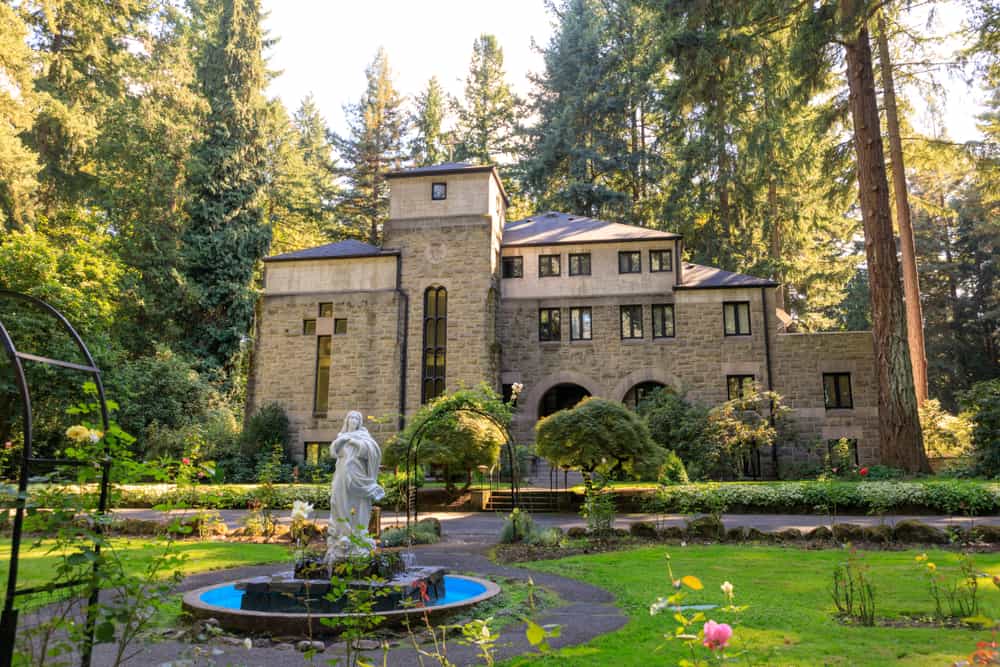 When you travel through Portland, Oregon, and visit the city’s most cherished natural attraction, The Grotto, you will see a beautiful and relaxing place where you can take in some spectacular views.

It is also a place where many people come to worship and ask for blessings from the Virgin Mary. This Catholic shrine attracts people from all around the world who seek peace and comfort in this holy site.

The Grotto is a secluded location and it is also home to the world’s largest natural rock formation. The Grotto’s natural environment and its Catholic heritage make it a popular tourist destination.

It is often considered one of Portland’s hidden treasures. The Grotto was created by Mother Nature and Father Time, who both had different plans for the land that now makes up the Grotto. 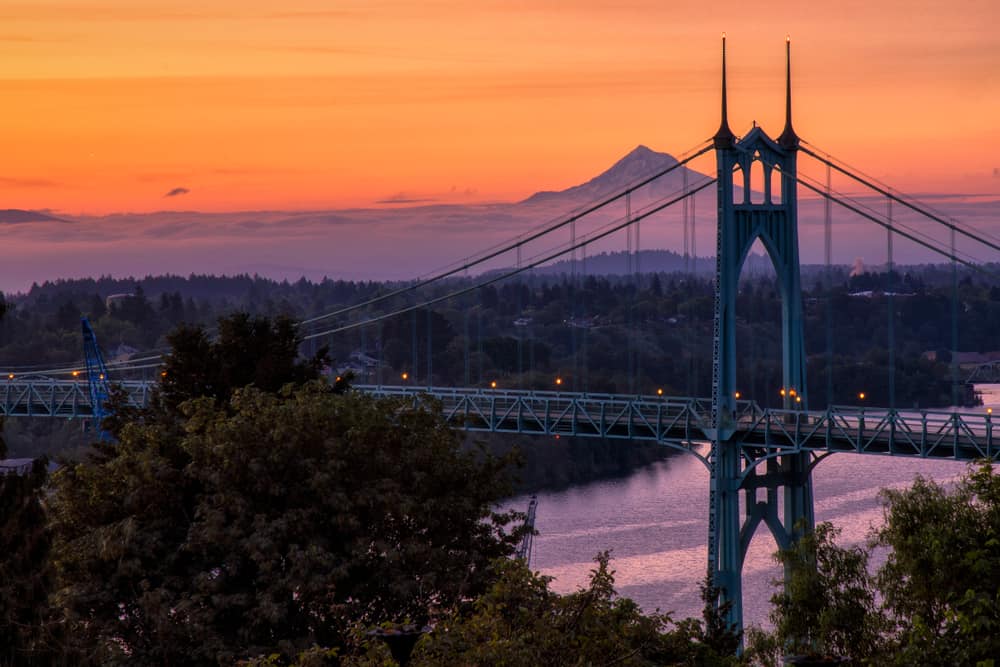 Originally, the bridge carried streetcars on its lower level and two lanes of vehicular traffic on its upper level. Now, it carries the traffic from the US 30 Bypass.

The bridge provides much-needed access for Portlanders to cross the Willamette River.

With its distinctive pointed towers, it is one of the most recognizable bridges in the world.