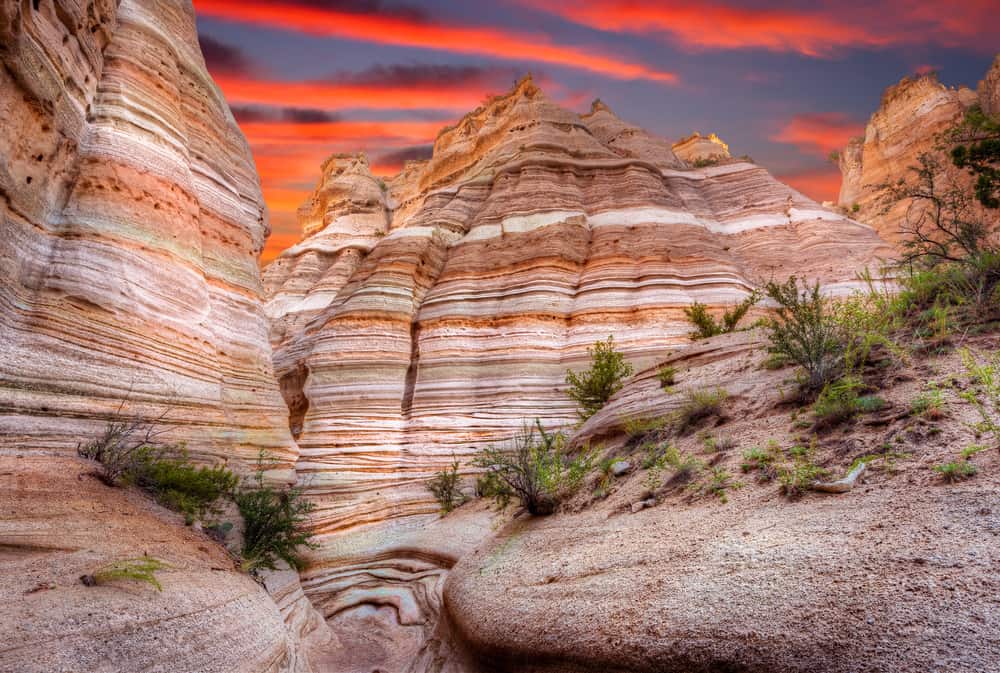 An awesome melting pot of different cultures and a place so bewitching it’s provided the backdrop to one of the most popular TV shows in history, the ‘Land of Enchantment’ really lives up to its hype.

Expect some of the most unique landscapes on the planet from mesmerizing geological wonders to dazzling seas of blanched desert sands…throw in some ancient Indian pueblos, mud-bricked churches filled with sacred art, and a good handful of microbreweries and you have a seriously cool place. In an area filled with showstopping natural attractions, it’s a very tough choice but here are the best and most beautiful places to visit in New Mexico…

1. Santa Fe – the oldest capital city in the US and one of the best places to visit in New Mexico

On the foothills of the southern Rocky Mountains at an altitude of 7,000ft is the highest capital city in the US. Founded in the 1600s, Santa Fe with unspoiled beauty, diverse culture, modern arts & Spanish colonial charm, offers something novel at every corner.

Explore the legendary Palace of the Governors, an iconic adobe structure, and delve deep into the history of this artistic state.

Visit the Santa Fe Plaza, a cultural hub and center of the city or tour the oldest Spanish church in the country, the San Miguel Chapel, the city has a wide array of art galleries on the Canyon Road and the most colorful culinary scene to suit your palate.

2. White Sands National Monument – one of the most stunning spots to explore in New Mexico 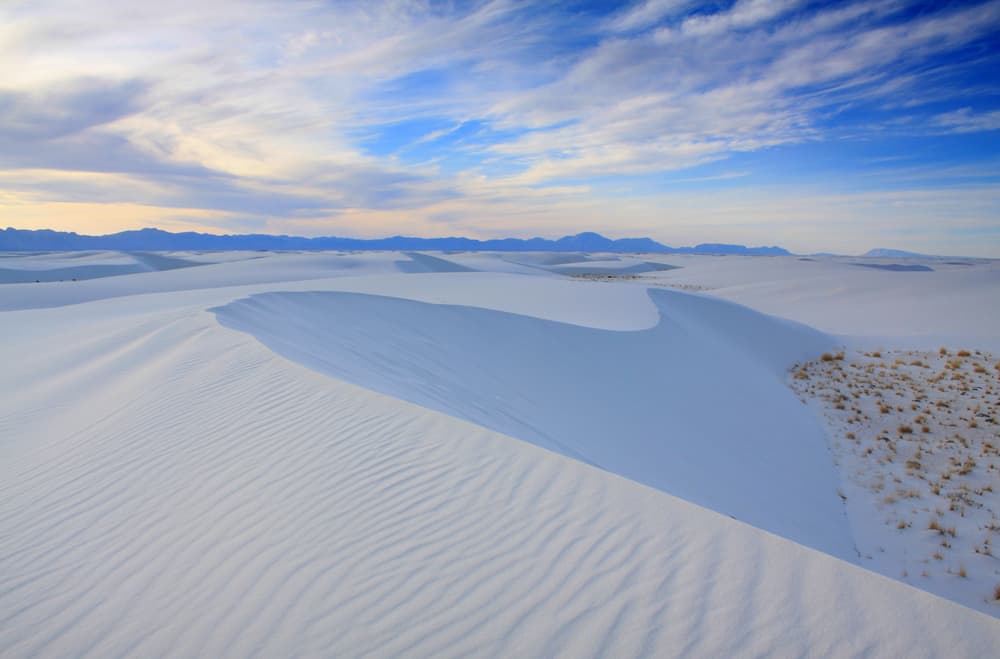 An expanse of dazzling white gypsum, the White Sands feature the largest white dunes in the world. A designated national park, the stark beauty and unique features of the dunes will make you step into an altogether new world.

Hike along the sandy dunes or go sledding down the dunes, the park offers a reflective view like no other during Moonrise.

3. Bisti Badlands – a scenic and unique expanse of undulating mounds and eroded rocks 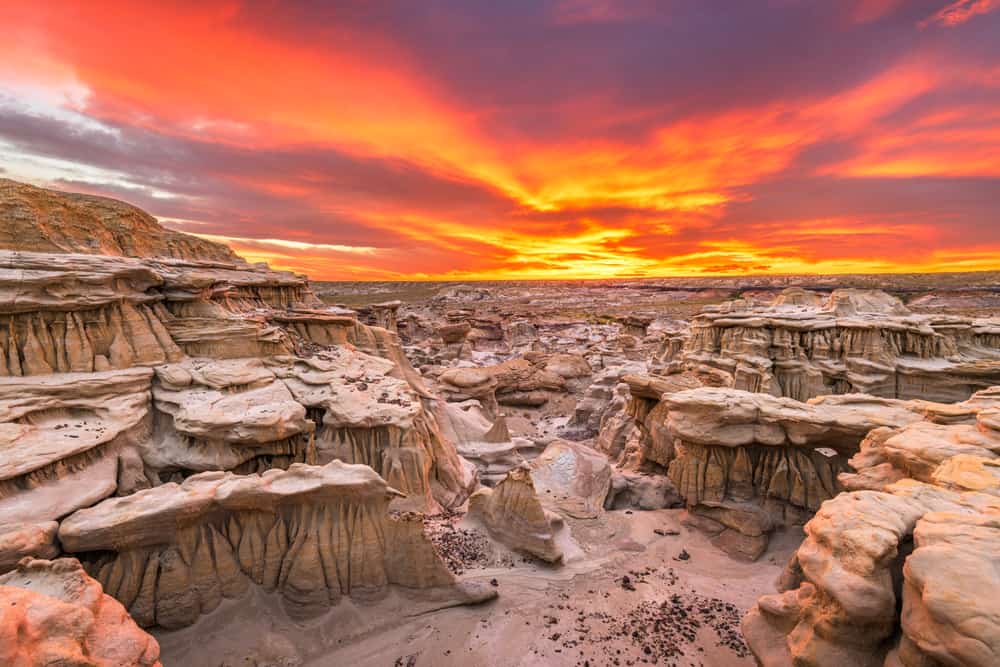 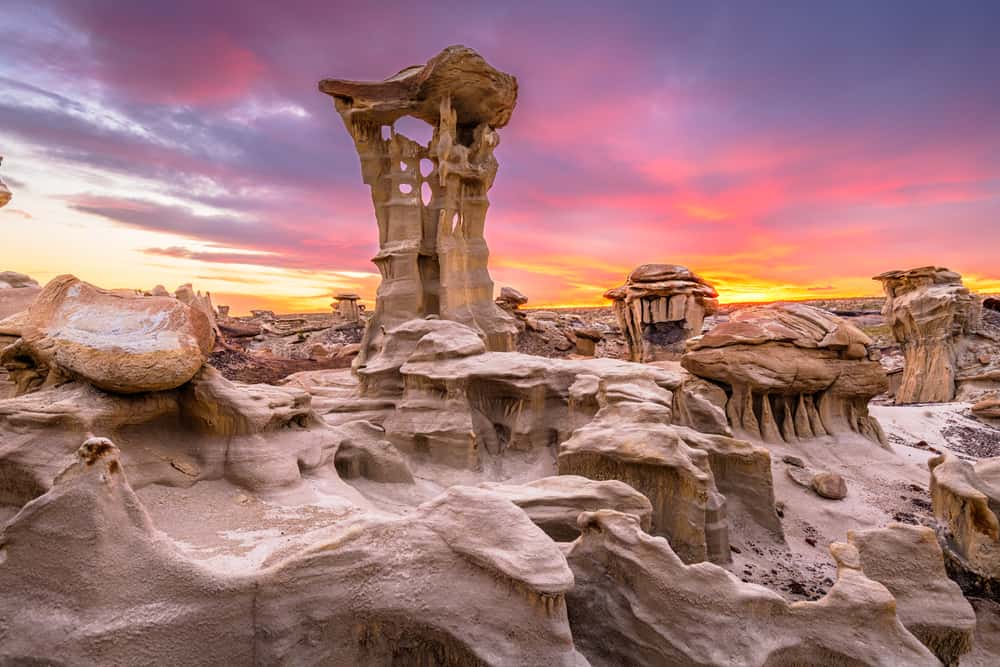 Tucked away in the arid-desert of the San Juan Basin, the unique wilderness of Bisti Badlands is located just south of Farmington. Featuring the most quirky rock formations, this high desert wilderness covers 45,000 acres of badlands.

The clayish hills of the wilderness comprise thin layers of coal, silt, shale, and mudstone with varied colors eroding into weird foreign shapes. Once a coastal swamp of an inland sea is today a true desert wilderness. 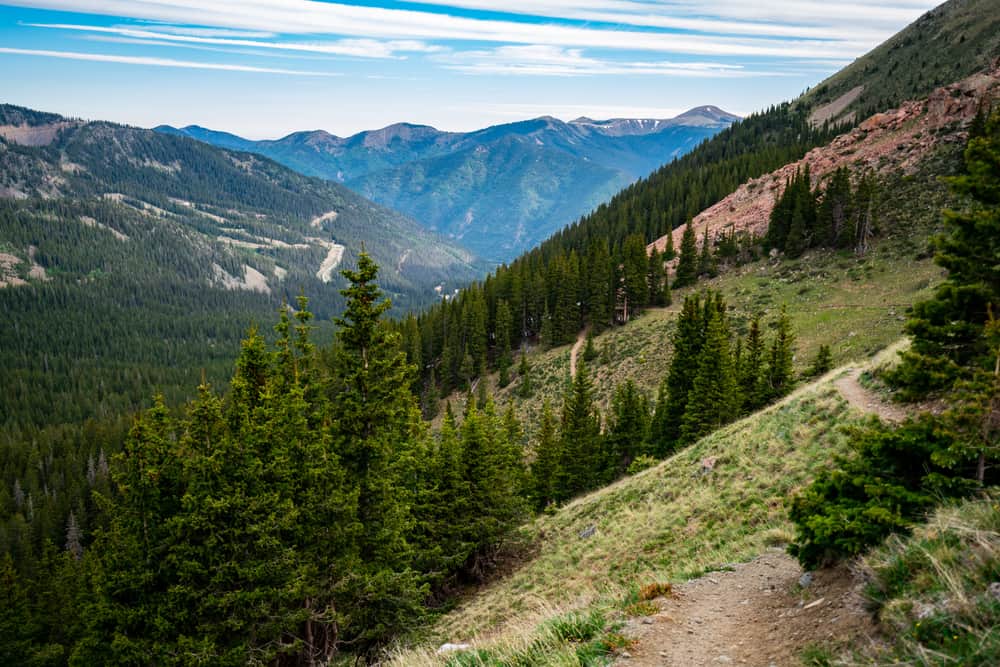 One of the finest alpine wilderness of New Mexico, the Wheeler Peak Wilderness comprises high rugged terrains, forests, tundra, and glacial cirques. Part of the Carson National Forest, the wilderness hosts the highest point in the state of New Mexico.

Lying next to the famous Taos Ski Valley, the Wheeler Peak Wilderness includes almost 20,000 acres of landform. Established in 1964, the wilderness is a paradise for outdoor enthusiasts.

With numerous hiking trails and freshwater lakes including Williams Lake, the area is home to a variety of plants and wildlife.

5. Shiprock – the beautiful and sacred peak of northwest New Mexico 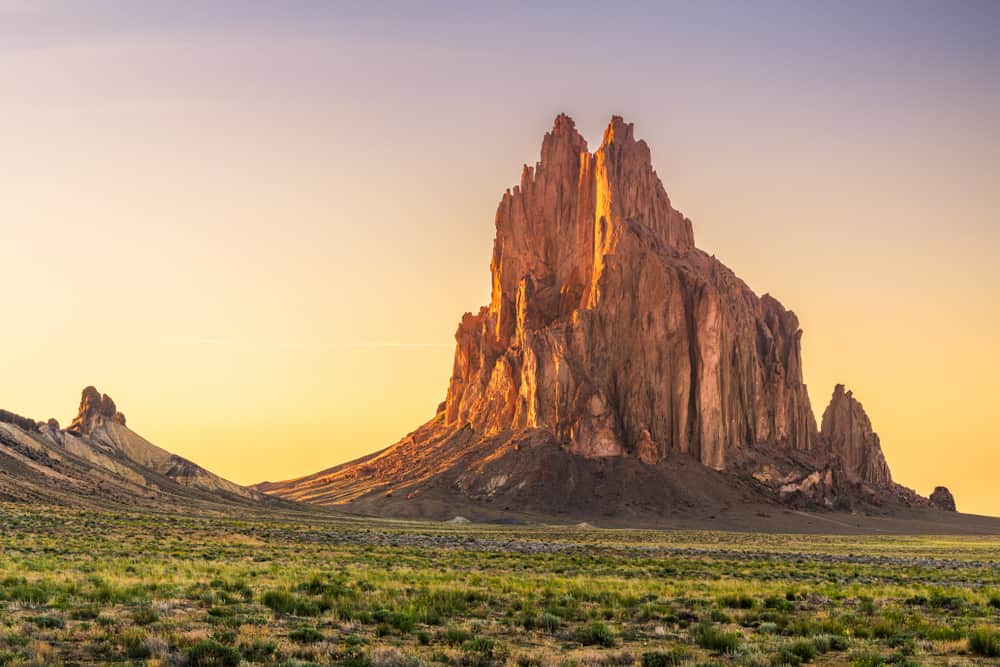 Ascending from a flat, dusty desert in northwestern New Mexico, the mysterious Shiprock is a prominent landmark of the Navajo culture.

Rising at a height of 7,000 ft., this rock mountain was formed millions of years ago. Located in the San Juan County of New Mexico, this mystical mountain resembles a large sitting bird with folded wings.

Legends believe that this mountain moved like a bird, carrying the ancestral Navajo people from their homeland when they were under attack. A national natural landmark since 1975, this volcanic rock is a sight to behold. 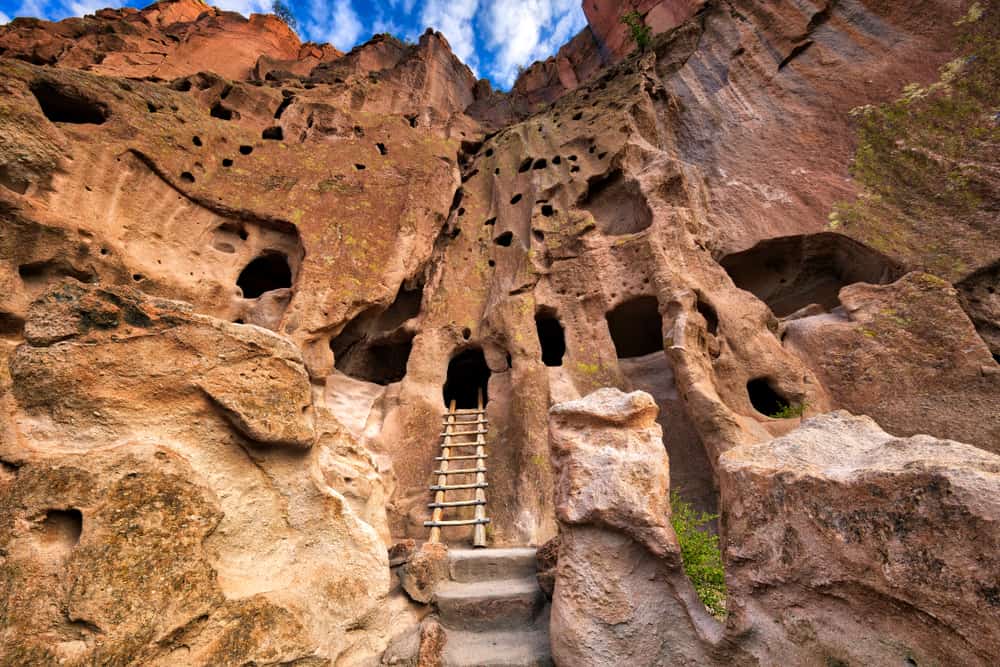 A monumental landscape protecting the ancestral Pueblo homes, the Bandelier National Monument preserves the homes carved from the volcanic tuff. A designated landmark, the park is located near Los Alamos in Sandoval counties in the foothills of the Jemez Mountains.

The park with an expansive stretch of scenic land contains preserved 1,000-year-old cave dwellings, Petroglyphs, and masonry walls of Pueblo people whose descendants still live in the nearby areas.

Hike along the easy Loop trail or the Bandelier backcountry for longer hikes, this landscape is time-travel in New Mexico.

7. A road trip along the Rio Grande River – a scenic and very beautiful experience in New Mexico 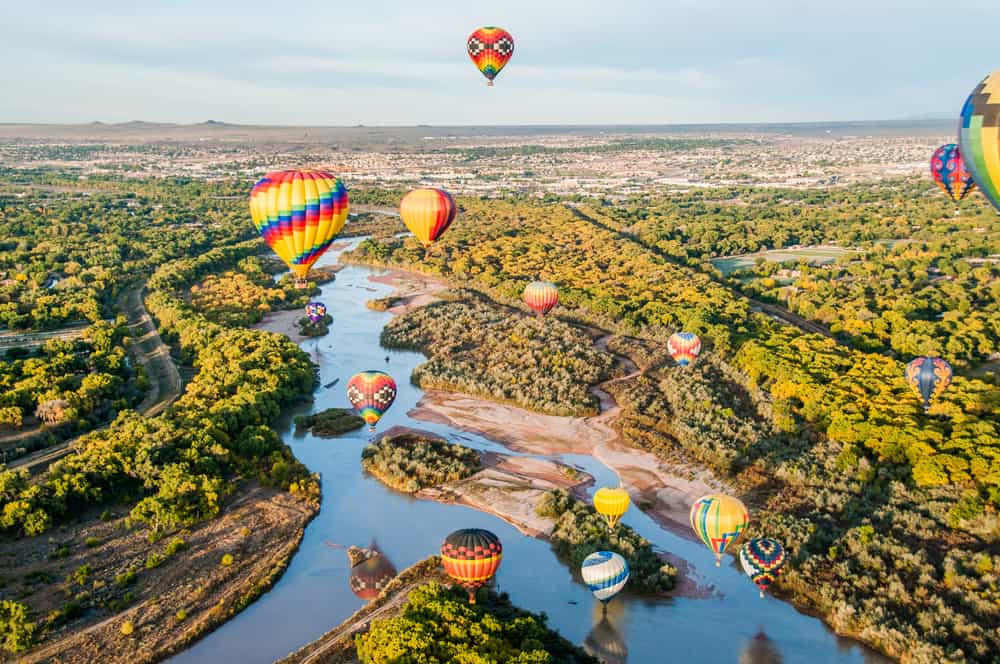 Traversing through the historic Route 66 highway, the ethereal skies and boundless terrains wind up your way with the cultural high point of New Mexico. Embark your journey from the world heritage site of Taos in the north, you will encounter the most beautiful steel bridge in the Rio Grande Gorge.

The drive further south will take you to the red hills and multilayered cliff walls of the Ghost Ranch. 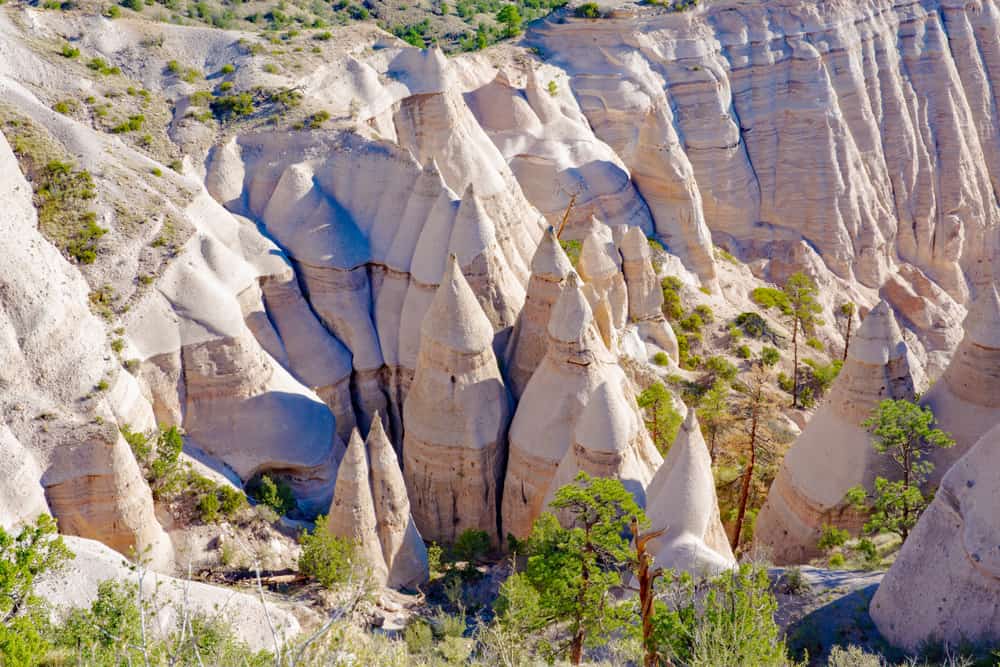 A fascinating landscape on the Pajarito Plateau of New Mexico, the Kasha-Katuwe Tent Rocks National Monument is the product of volcanic eruptions from the Jemez Mountain volcanic fields. Kasha-Katuwe in the native Keresan language means white cliffs.

The delicately layered sand gravel, volcanic ash, and tuff deposits are the remains of the large volcanic eruption that occurred 6 to 7 million years ago.

The cone-shaped tent rocks. Hoodoos, and pedestal rocks offer an opportunity to hike, observe, and experience these remarkable eroding rocks.

9. Acoma Pueblo Village – The oldest inhabited community and a unique attraction to visit in New Mexico 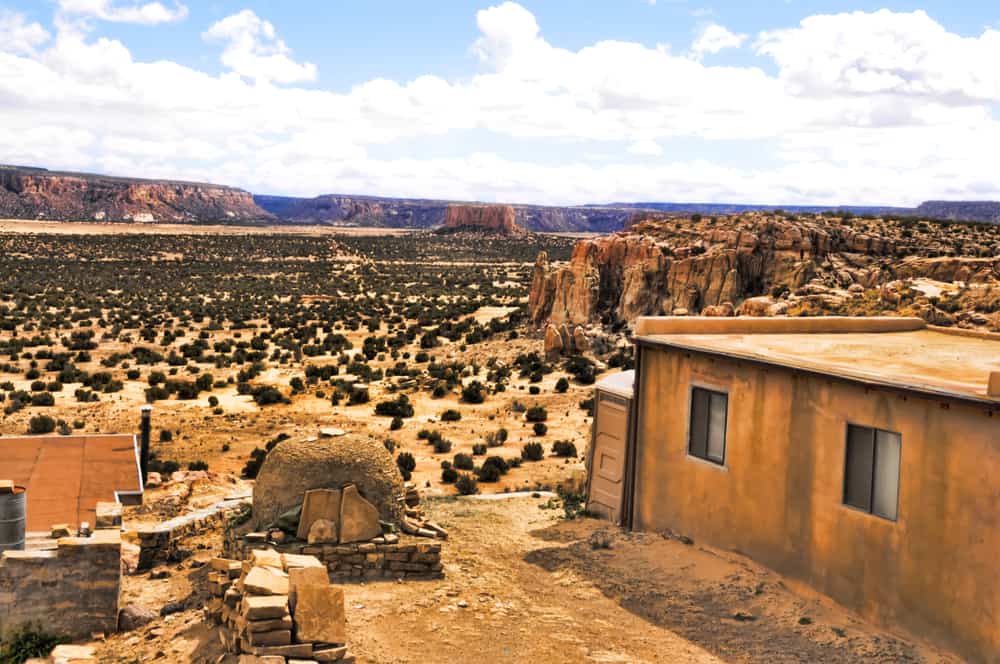 A cleverly positioned sandstone mesa of the Acoma Pueblo is known for its unique art and rich culture. The towering sandstone nearly 357-ft. located 60 miles west of Albuquerque was known to be accessed by a hand-cut staircase.

Also known as the Sky City, the Acoma Pueblo was built between 1100 and 1250 A.D.  Discover the history and culture of southwest Indians in the Haak’u Museum with renowned exhibits and stunning Pueblo pottery.

Today, nearly 50 tribal members dwell in the earthen homes of the city while the rest live in the San Estévan del Rey Mission and nearby villages of Acomita, McCartys, and Anzac. 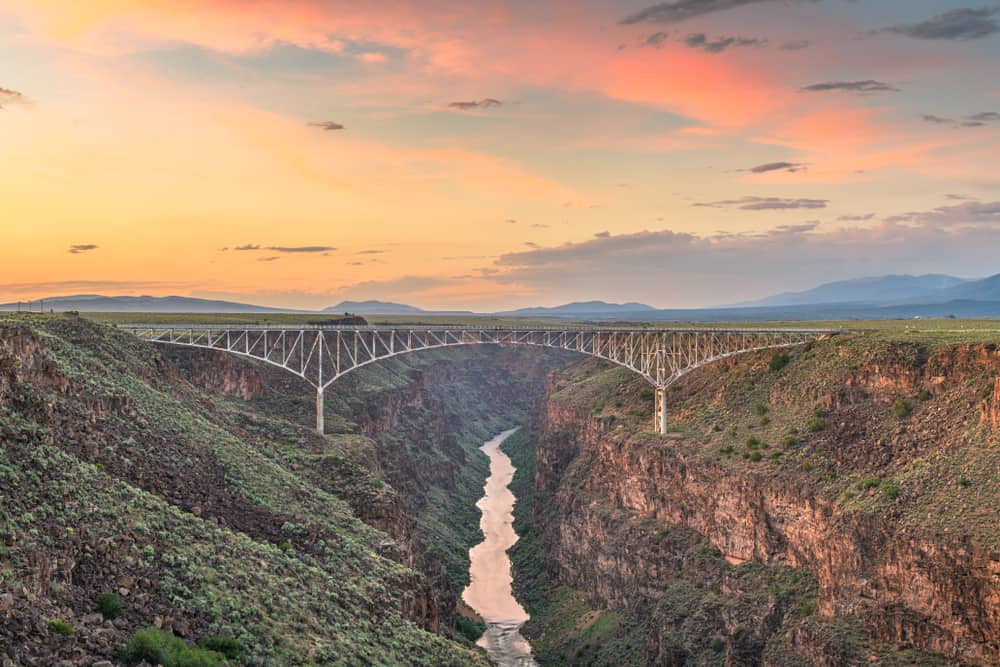 Standing 600ft above the gorge, the Taos Bridge is the fifth highest bridge in the United States.

A major tourist attraction of the region, the beautiful long-span bridge of Rio Gorge features in several films. A trip to New Mexico is incomplete without visiting this iconic bridge. 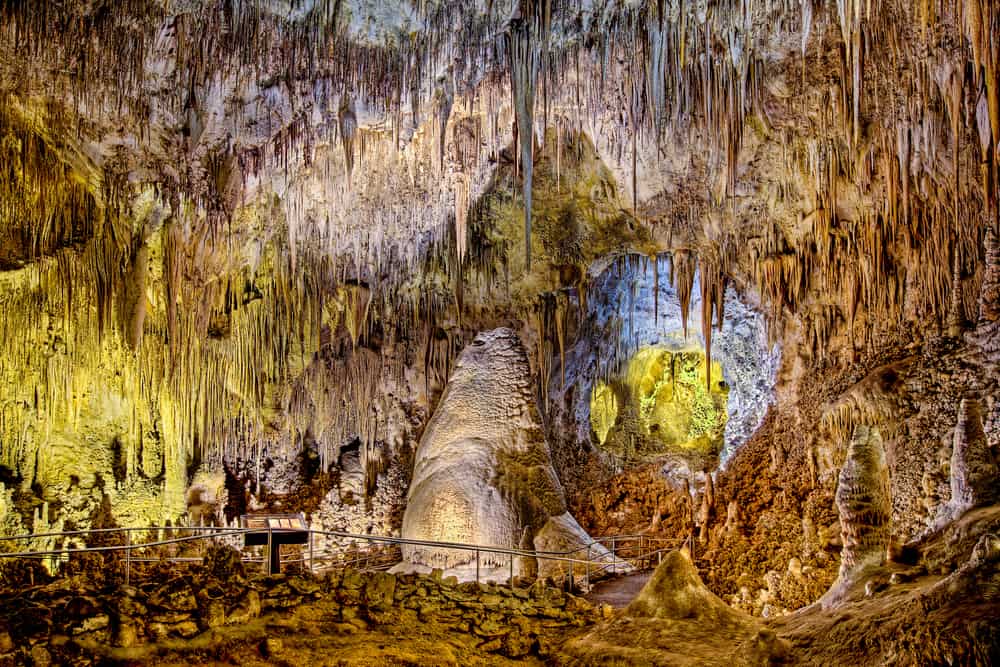 Beneath the deep rocky canyons and flowering cactus is a hidden treasure of numerous calcite formations. The Carlsbad Caverns National Park is nestled in the Guadalupe Mountains of southeast New Mexico.

Once a coastline of an inland sea, today this area features the remains of diverse marine life. A Home to more than 119 rare caves, the Caverns National Park is known worldwide for the size, diversity, and beauty of the caves.

The primary attraction of the National park is the Big Room chamber which features the largest caves in North America.

12. Cumbres-Toltec Scenic Railway – one of America’s most scenic train rides 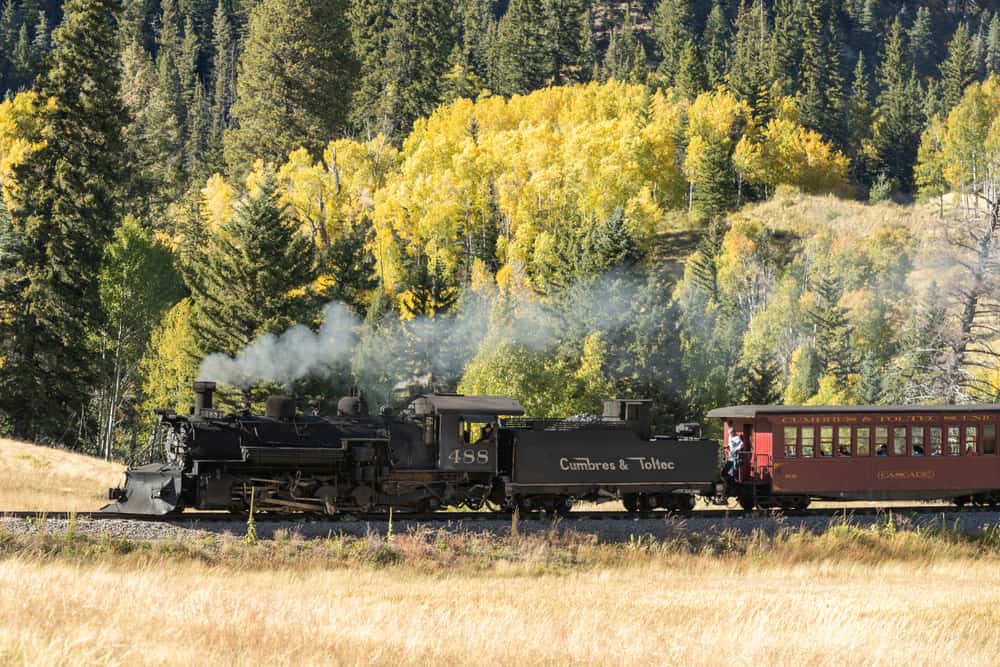 Hop into America’s longest coal-fired and steam-operated railroad operating on 64 miles since 1880.

Beginning from Antonito to Chama, the heritage steam engine travels through steep mountain canyons, high deserts, and lush meadows across the borders of Colorado and New Mexico.

Fill your day with the captivating and rare Western scenery only viewed from this lovely train ride. Ride on the Victorian elegance deluxe car or budget-friendly coach car, the ride offers a chance to venture off-grid and experience the unspoiled beauty across the Rocky Mountains. 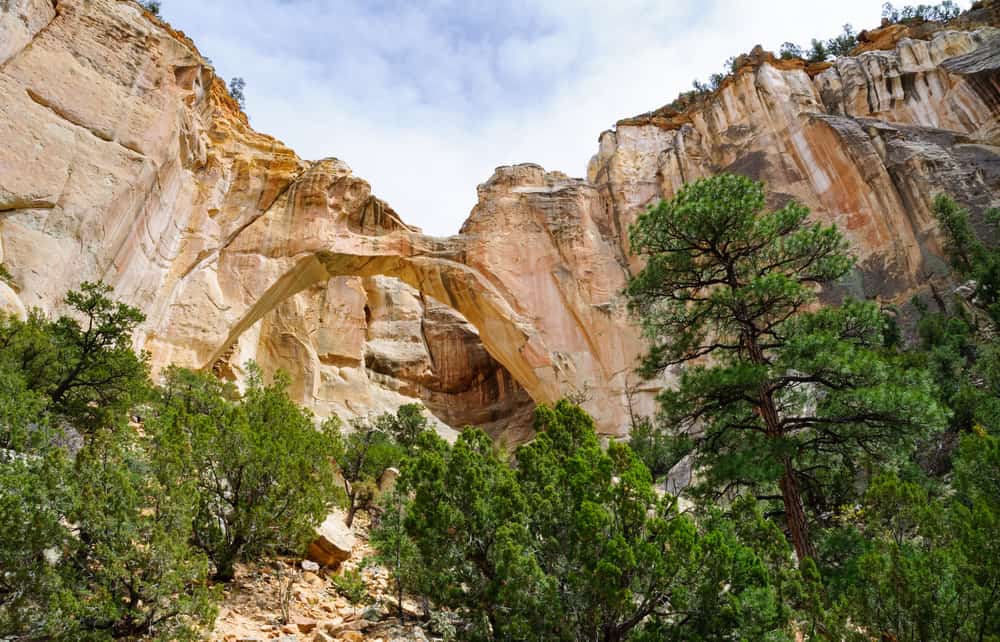 Heaven for geology enthusiasts, the monument offers trails to watch out for the youngest lava flows in the monument.

At the heart of the National Monument is Mexico’s largest arch, the La Ventana Natural Arch which offers a panoramic vista of the sandstone. Enjoy the striking sandstone cliffs, canyons, ice caves, lava tube caves, cinder cones and much more while you hike and camp.

14. The Taos Mountain Trail – a stunning and historic hike to the state’s largest peak 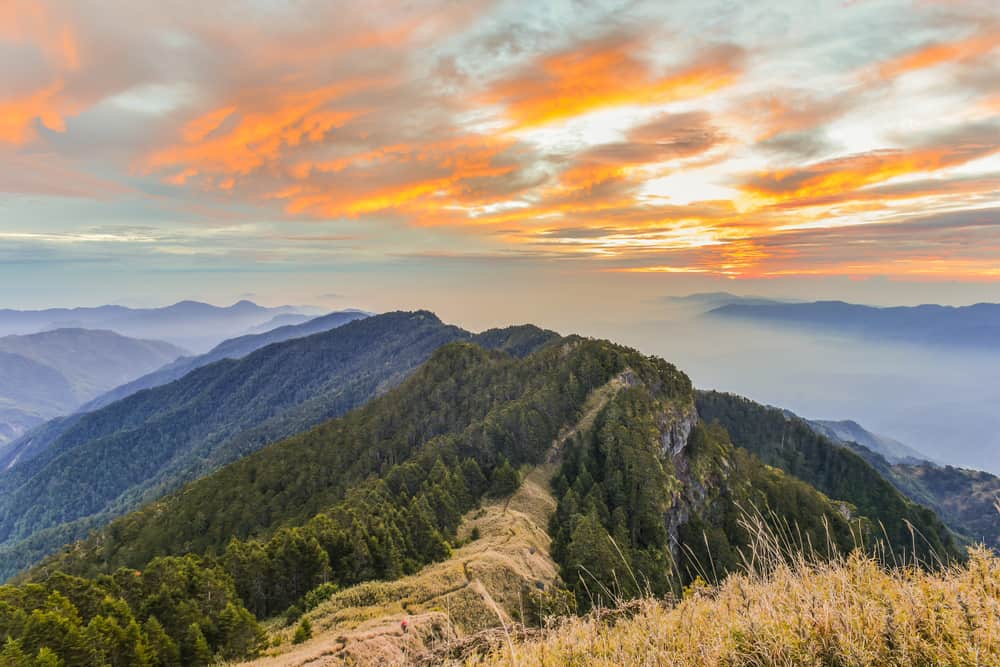 Spanning from Costilla Creek in the north to Tres Ritos in the south, the Taos Mountains are home to numerous peaks in New Mexico. The highest peak of Mexico, Wheeler Peak is located approx. 70 miles northeast of Santa Fe in the Sangre de Cristo Mountains.

A stunning view of scenic lakes, beautiful gorges and alpine landscape makes for an unforgettable hike. 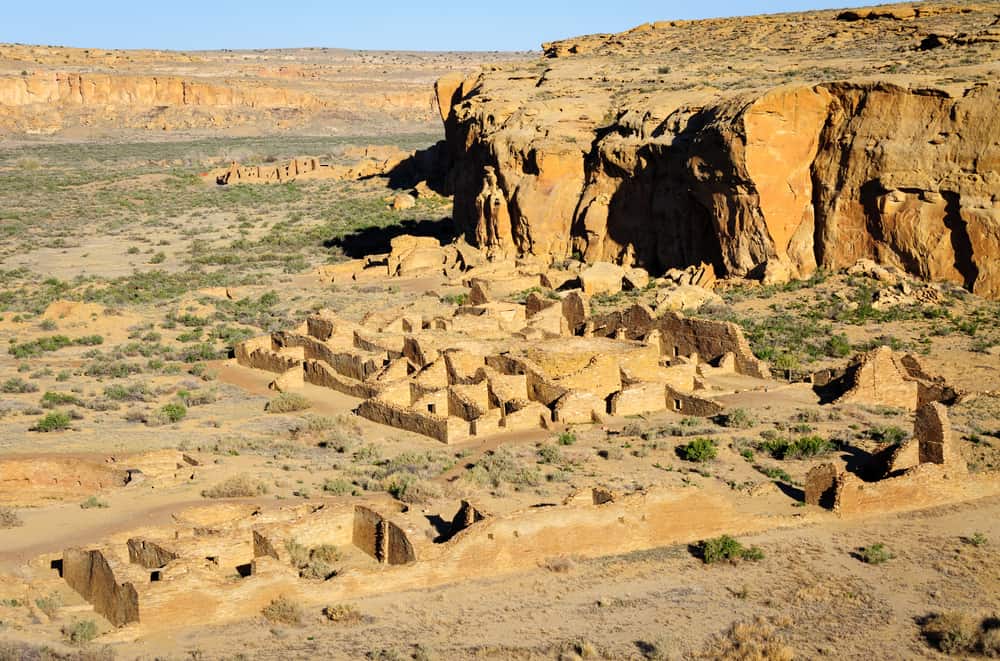 A designated World Heritage site, the historic park is located in northwestern New Mexico between Albuquerque and Farmington.

Explore the best-known houses of Pueblo Bonito and Chetro Ketl or venture the canyon’s spiral petroglyphs at the Fajada Butte high atop the isolated hill.

A World Heritage site, the Chaco Canyon hosts the largest buildings made in North America which were architecturally advanced of its times.

People who have never been to New Mexico often think of it as a dry, sparsely populated desert state. Indeed, the desert is a large part of what makes New Mexico beautiful. But there are also many other beautiful places in New Mexico besides the deserts and mountains that get all the attention.

You can’t visit New Mexico without discovering that the summers are hot, often exceeding 100 degrees. Obviously, this makes outdoor activities difficult during the summer. There are ways to stay cool though. Since water is very scarce in the desert parts of New Mexico it’s really important to make sure you bring enough water to keep yourself hydrated or risking heat stroke or worse.

Visit during the winter

The weather is very mild during the winter, especially in Albuquerque and Santa Fe where a light jacket or coat will suffice even at night time, which makes it a perfect time to visit New Mexico.

Always make sure you keep your gas tank full when visiting New Mexico since the only available fuel is in remote areas.

You’ll be spending much of your time outdoors in nature or at archaeological sites, so don’t expect big cities with theaters, shopping malls, and all the modern conveniences to be nearby! Pack enough food and water and make sure to get enough rest in between all the fun things you’ll be doing

So, what are you waiting for? Start planning your trip to one of the most amazing places on Earth. With such a wide variety of things to see and do, there’s something for everyone in New Mexico. What attraction are you most excited to visit?