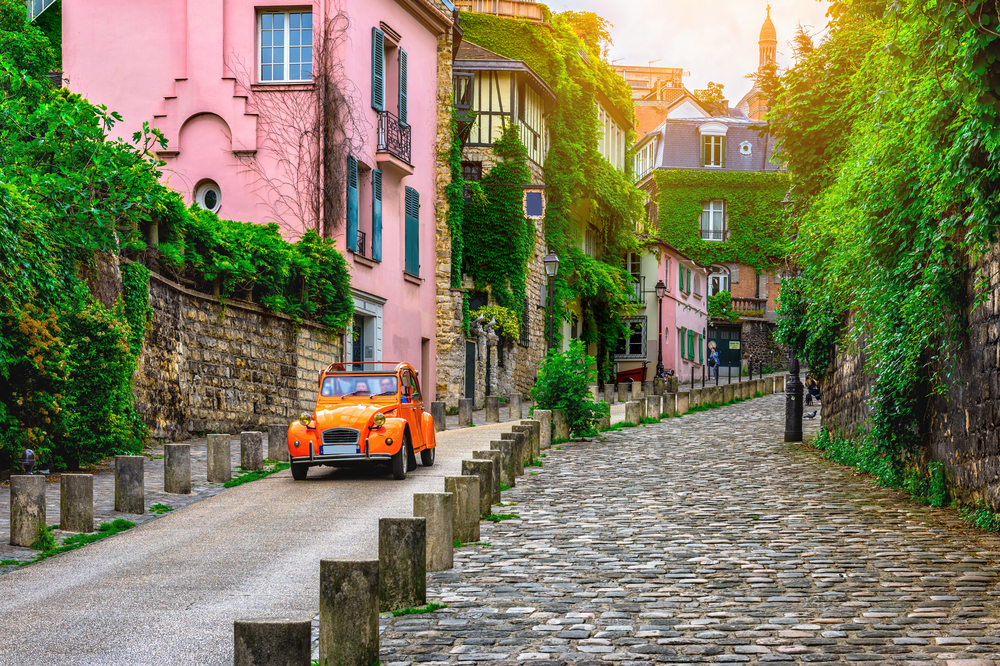 There is something magical about walking the streets of Paris, knowing that at some point in the past Hemingway, Joyce and Scott Fitzgerald too tripped along the same cobbles. Although nothing quite takes the magic of the moment away than having to queue in long lines to catch a tiny glimpse of Mona Lisa or dodging the snaking crowds of Montmarte. This is why we recommend going off the beaten track to experience the chic, bohemian and hidden gems that Paris has to offer, here are 12 of the best Under-the-Radar Places in Paris for Travel Snobs…

1. Belleville – a pretty, authentic and edgy neighborhood in Paris 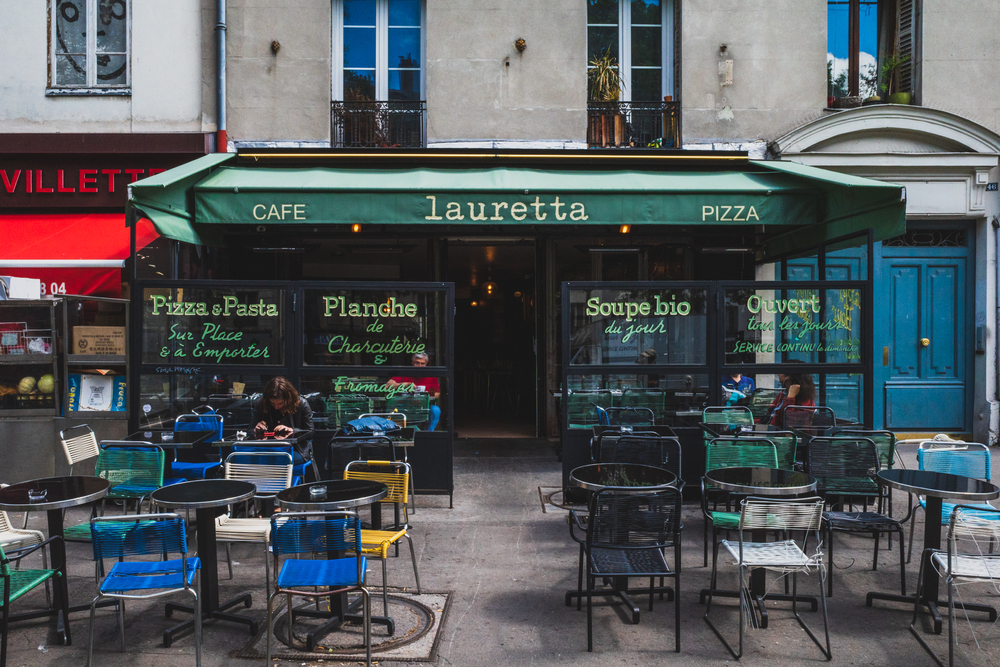 Once an independent municipality that was annexed by the city of Paris in 1860, the neighbourhood of Belleville straddles four different arrondissements and throughout history has been a refuge for those fleeing strife in their own lands. Due to this colourful backdrop, Belleville has a multi-ethnic vibe with elements of China, Greece, Germany and parts of Africa blending together with the traditional Parisian foundations.

Here you will find the chicest of the bright young things dining out in places like Septime or Clamato for a fraction of the cost in the more established parts of the city. What better way to embody the Parisian vibe, than to grab a glass of wine at one of the many bars and watch the movements of this artsy neighbourhood unfold in front of your eyes. If you’re looking for another great district also check out Le Marais, which has been one of the hippest parts of the city. 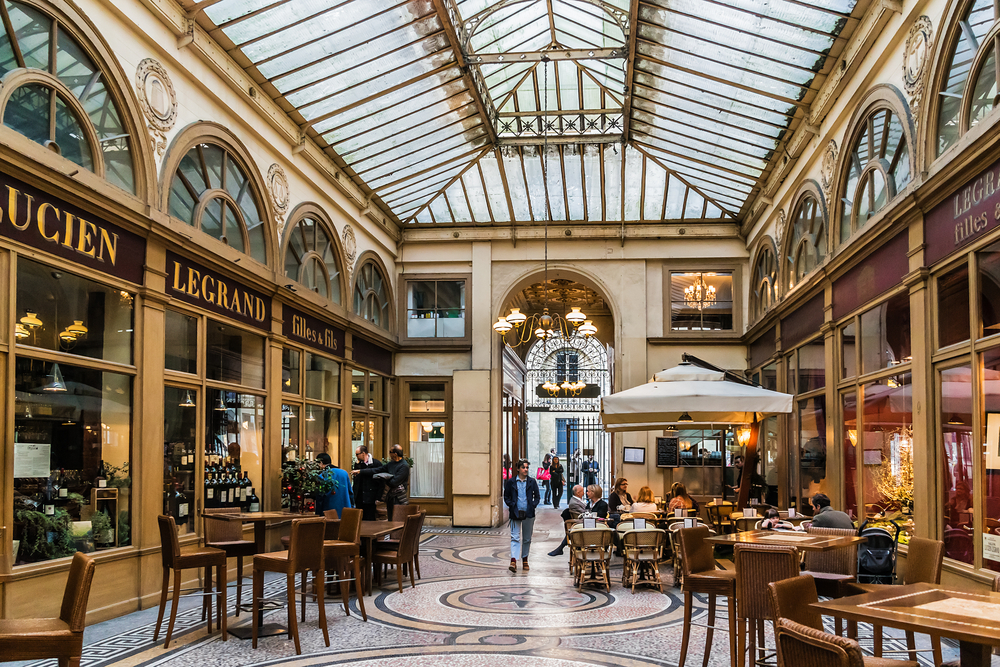 Located in the 2nd arrondissement, these beautiful indoor shopping arcades began being built throughout the 18th and 19th century and are of stunning architectural prowess. They were, I suppose, the original shopping malls with massive glass-domed ceilings and breath-taking architrave, they allowed the citizens of Paris to take shelter from the rain, spend an afternoon sipping coffee in peace or indeed to spend a secluded hour with a lover- everything in Paris has a romantic connotation!

The most beautiful of these passages couverts is Galerie Vivienne complete with ochre paintwork, detailed mosaics and a traditional tearoom. Even during busy times it has an air of quiet and tranquillity around it with its chic boutiques, somnambulant tearooms and of course venerable wine cellar and romantic upstairs dining room.

For a beautiful day trip from Paris, a great under-the-radar option is to experience the opulent, extravagant France of Louis XVI at Chateau de Vaux le Vicomte. The chateau was purchased by Nicholas Fouquet in the 1600s and was transformed into the stunning chateau we see today, the first of the so-called Louis XVI style- lavish, stunning and dazzling to behold.

This was not the type of home the Minister for Finance in an impoverished France should have and he was later imprisoned and guillotined for his efforts, during the revolution. However, it is little known that following the imprisonment of Fouquet, Louis sent a team of artists to Vaux le Vicomte to seize the tapestries, painting and statues and ordered them to create a similar home for him and his wife in a likeness to Vaux le Vicomte: the Palace of Versailles. 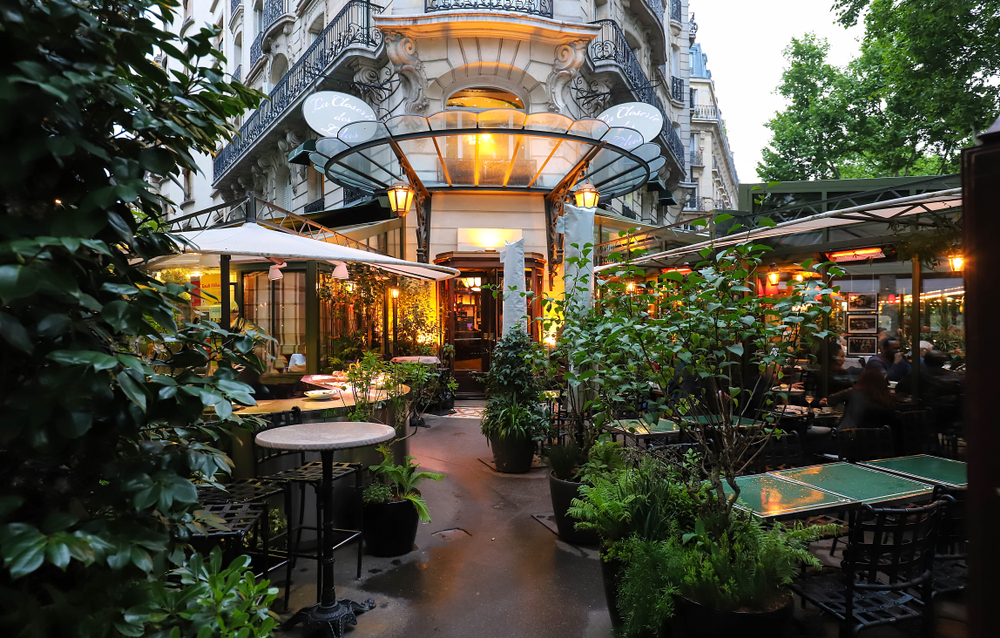 An absolute personal favourite of mine and where I enjoyed a New Years Eve meal before ambling up to Le Tour Eiffel to enjoy the light show. Like Les Deux Magots, La Closerie des Lilas is a former artisan favourite, counting Hemingway, Miller, Cezanne and Picasso as patrons.

These days you can enjoy beautiful French food at its best, a sizzling atmosphere that’ll give you goosebumps, live piano music and sumptuous cocktails, of course the company is good too. If it’s good enough for Hemingway…. 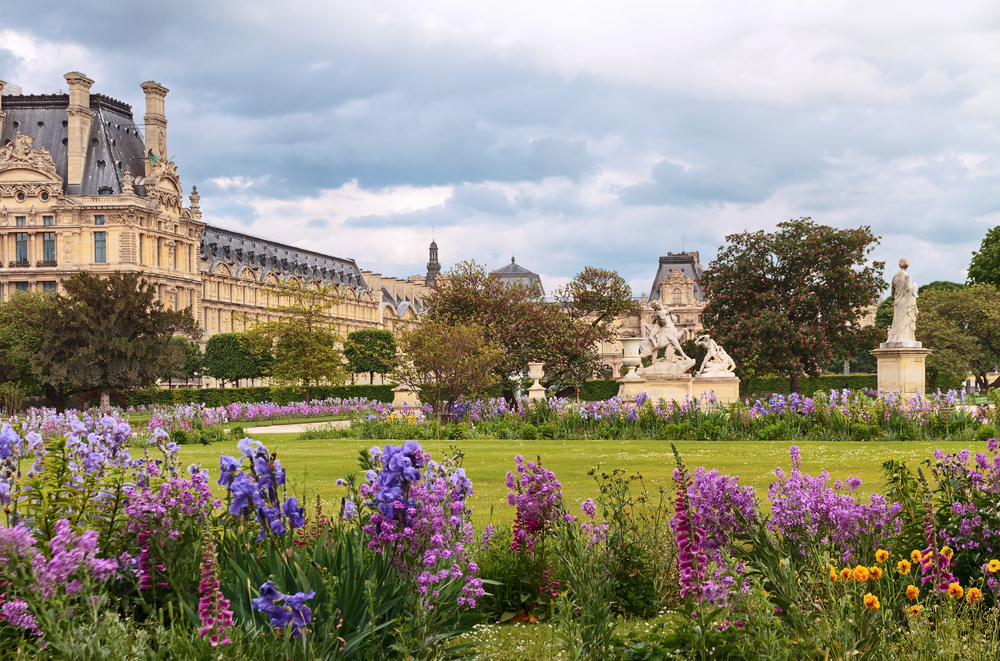 Okay we cheated a bit on this one as it’s not under-the-radar but it’s a beautiful part of Paris I couldn’t leave out. Tuileries was originally the site of a grand palace before it was burned by the Paris Commune and demolished in 1883. It is now an open complex park and gardens which, closely follows the style laid out by the royal landscaper André le Notre in 1664.

There are a number of shaded spots perfect for picnicking, reflecting pools for photo opportunities and the Galerie Nationale du Jeu de Paume is located in the northwest corner of the gardens and is devoted to the display of modern and postmodern art and photography. 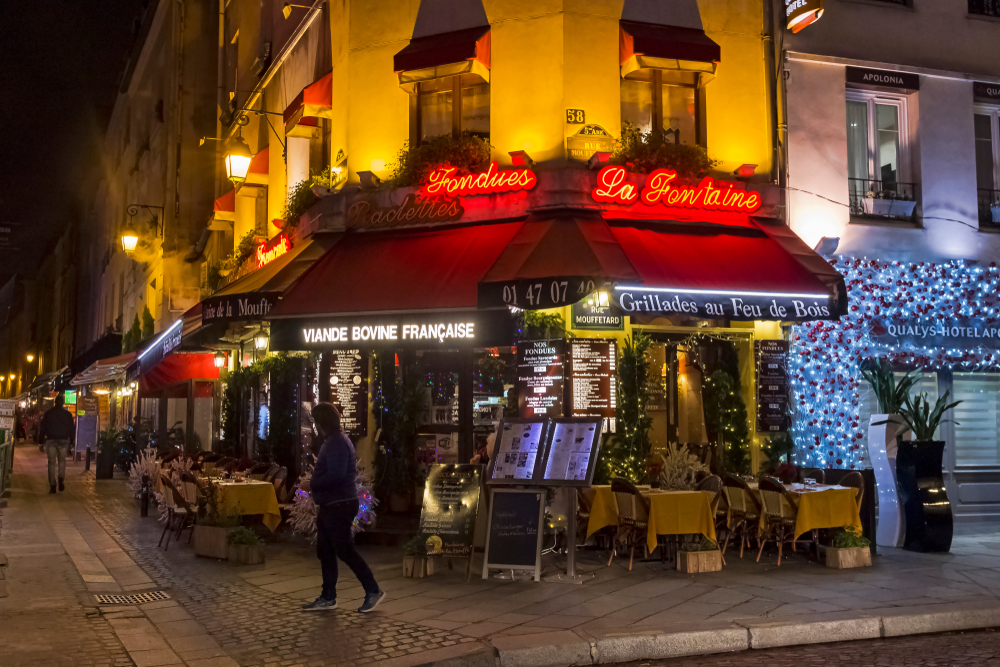 Hemmingway described it as a “wonderful, narrow, crowded market street” and like most things, Hemmingway was on the button with his description of Mouffetard. Les Marchés are as dear to French hearts as good cheese, wine and coffee. Located in the fifth arrondissement, Rue le Mouffetard is a veritable smorgasbord of choice, ranging from pastries to trendy boutiques and bohemian coffee haunts.

Aside from all of the choice of fare, there is on-street entertainment and live music which, gives the whole area an atmosphere of conviviality and joie de vivre!

This unique plant-lined walkway stretches over 4 kilometres from Place de la Bastille to Bois de Vincennes over abandoned railway lines. Designed in 1988 and opened in 1993, this is surely the most unique and original way to explore the area en route to or from the historical Bastille.

Your route will be dotted with interesting pieces of street art, vibrant foliage and colourful blooms. This is more popular with locals than tourists so you are more likely to have a crowd-free view of the city.

Oh Paris, the city where only the river is sane. Despite being one of Europe’s most famous, most wrote about and most sung about rivers, it is also the only officially listed UNESCO site in Paris and is often forgotten about as a tourist attraction.

There is nothing more relaxing than sitting on the banks of the Seine with a sneaky box of macaroons from the famous Ladurée and watch the city slip past. From your resting point on the banks, you will be afforded a unique view of the city. It is often forgotten that the most important thing to experience in Paris is to sit and watch the world go by not rush from attraction to attraction.

It is a truth universally acknowledged that Paris is renowned for it’s café society, the heart of which is embedded into the culture of Saint Germain. Enter (Entre) La Palette, opened in 1905 and frequented by the bright and beautiful of the bygone Jazz era and currently boasts a patronage of art students from École des Beaux-Arts as well as actors like Harrison Ford, possibly because La Palette offers the perfect balance of Parisian style and French nonchalance.

Little has changed in La Palette since 1905 and the wooden bar is usually crowded with local customers sampling the many wines and liqueurs on offer. Definitely not a tourist trap- and definitely worth a visit.

This one of the few entirely free museums in the city and is located in a beautiful old Napoleon III townhouse. Inside the ornate rooms you’ll find displays showcasing the history of perfumery since ancient times as well as in-depth explanations about the production of perfume. The perfume organ displays the many different ingredients that perfumeries use to produce a scent.

You will exit the building through Fragonard boutique where you can sample the perfumes on display- although there is no sales pressure, you are welcomed to purchase a bottle from the display counter. And I recommend it- what better way to remember your trip, than to bottle it?

When visiting Paris it is important to remember that it is more than just Le Tour Eiffel, Louvre and L’Arc de Triomphe. Don’t waste your time in this amazing city standing in queues, go off the beaten track and lose yourself, who knows what delights you might find?

Bar le Forum is located right in the heart of Paris (4 Boulevard Malesherbes) and boasts an impressive menu of cocktails, served in elegant , oak-panelled surroundings. The bar itself is a popular with local Parisians so you are more likely to find a Birkin not a backpack hanging on the back of a chair but this makes it even more superb.

The service is excellent, there is lots of space to sit back and relax and a variety of good music. What better way to savour your surroundings than by sitting on the terrace with a Forum Cocktail (mix of gin, vermouth and Grand Marnier) enjoying Paris in the springtime or the fall.

Located in the Marais district, this is a unique attraction for both adults and children alike. While the crowds are at Musée D’Orsay or the Pompidou Centre, you can enjoy an afternoon in the milieu of interactive exhibits and interesting magic memorabilia- even some from the great Harry Houdini.

While Paris might be known more often as the city of love, it is also the city of magic which, is also a universal language and the daily magic shows at the museum prove that you can enjoy the thrill of the magic show without speaking a word of French- and you can purchase magic tricks to bring home and dazzle your friends!

Our suggestions for travelling to Paris

With itchy feet, an inquisitive nature and an ardent wanderlust, Emma Clair has always been a traveller at heart. Hailing from the Emerald Isle she calls a small coastal town near Dublin home, but has lived in a few countries including Saigon, Vietnam where she resided for over a year. She counts supping on Bloody Marys on a rooftop in Manhattan, downing Singapore slings at the Raffles Hotel, daring a paraglide on the Grand Cayman, spending an exotic Christmas in Malaysia and exploring the Angkor Wat, Cambodia as her all time favourite travel moments. Although, she’ll always have a special place in her heart for the city where she makes her annual pilgrimages – Paris, her true city of lights.