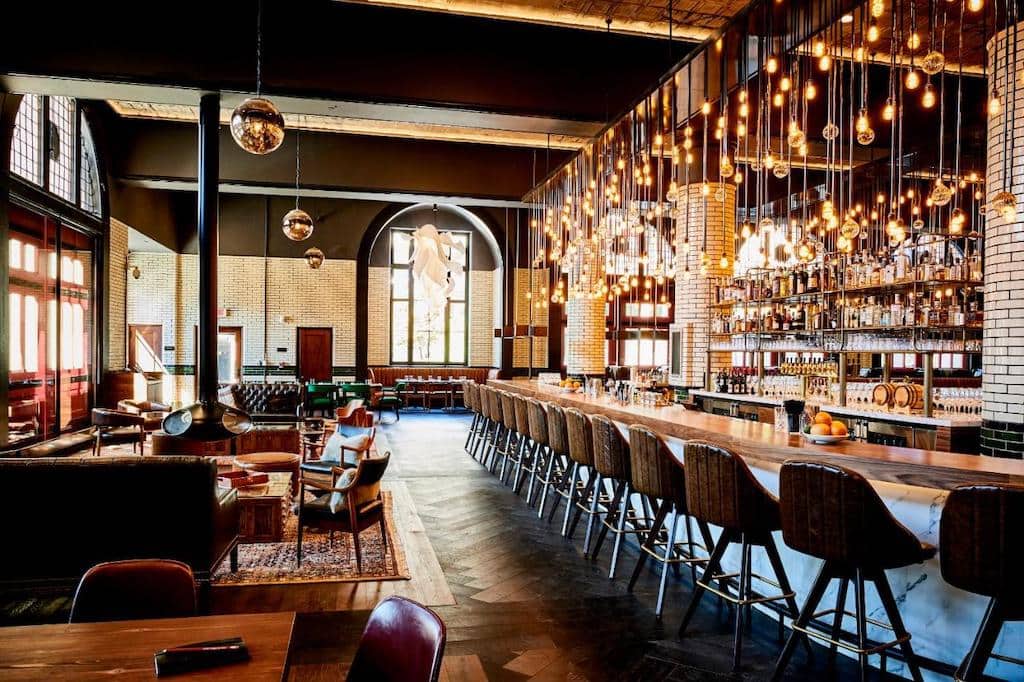 Although it’s had some troubled times, the largest city in the midwestern state of Michigan is now attracting young city trippers looking to explore its hip neighborhoods and creative enclaves. Head to Hitsville the birthplace of Motown Records, trendy Corktown which has seen many new restaurants crop up on its streets, Downtown for more mainstream attractions and then stay in one of their quirky chic hotels. From unique and intimate boutiques to fun, modern and upbeat, here are the best cool and unusual hotels in Detroit (in no particular order)... 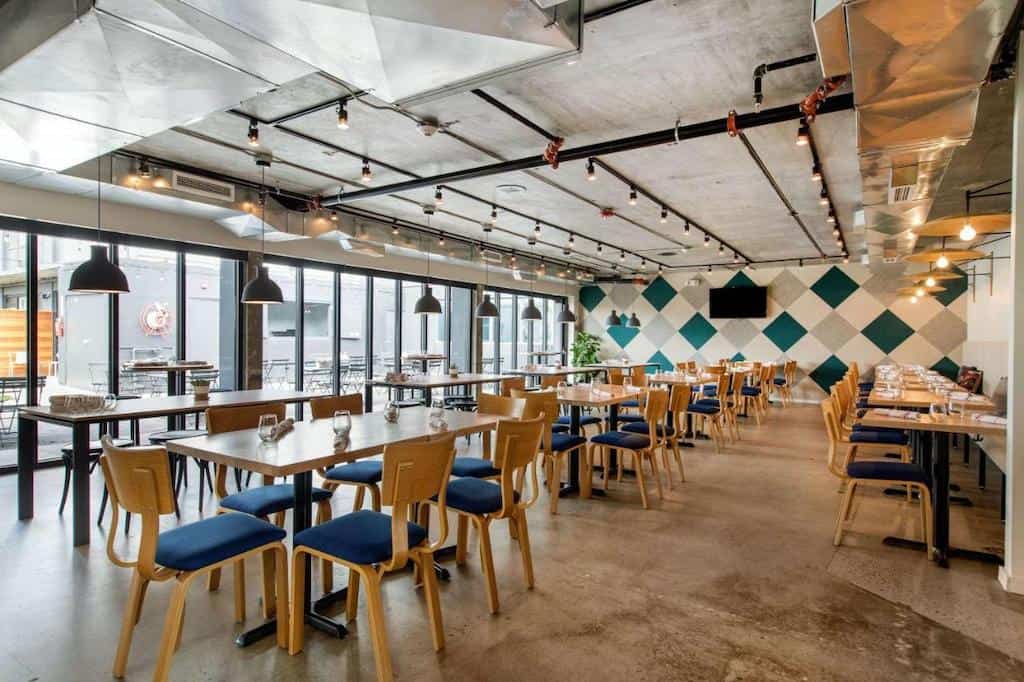 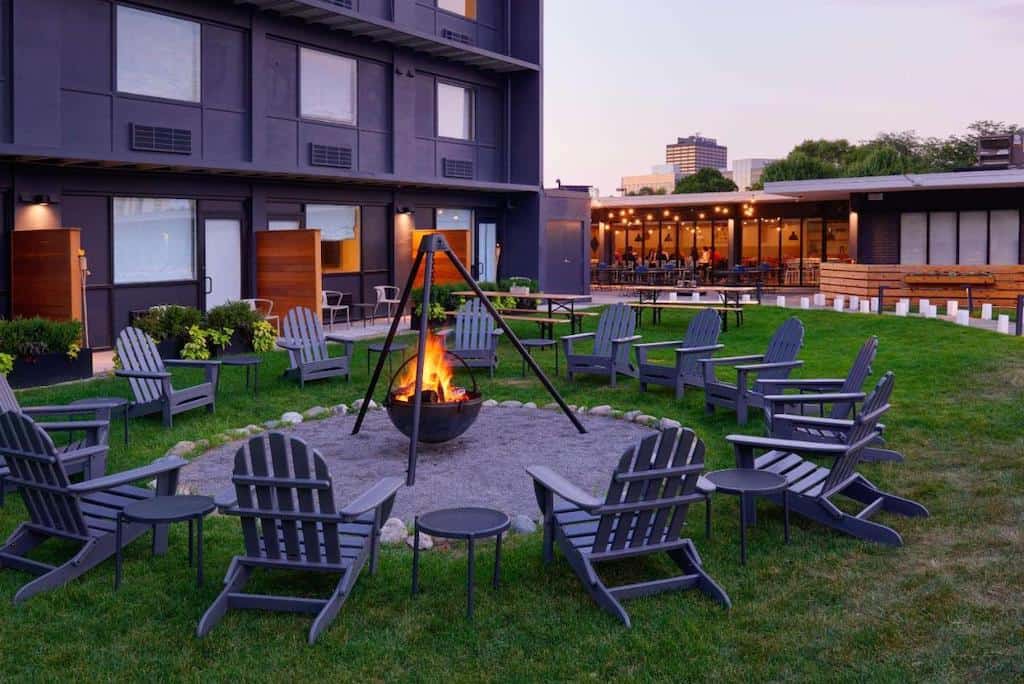 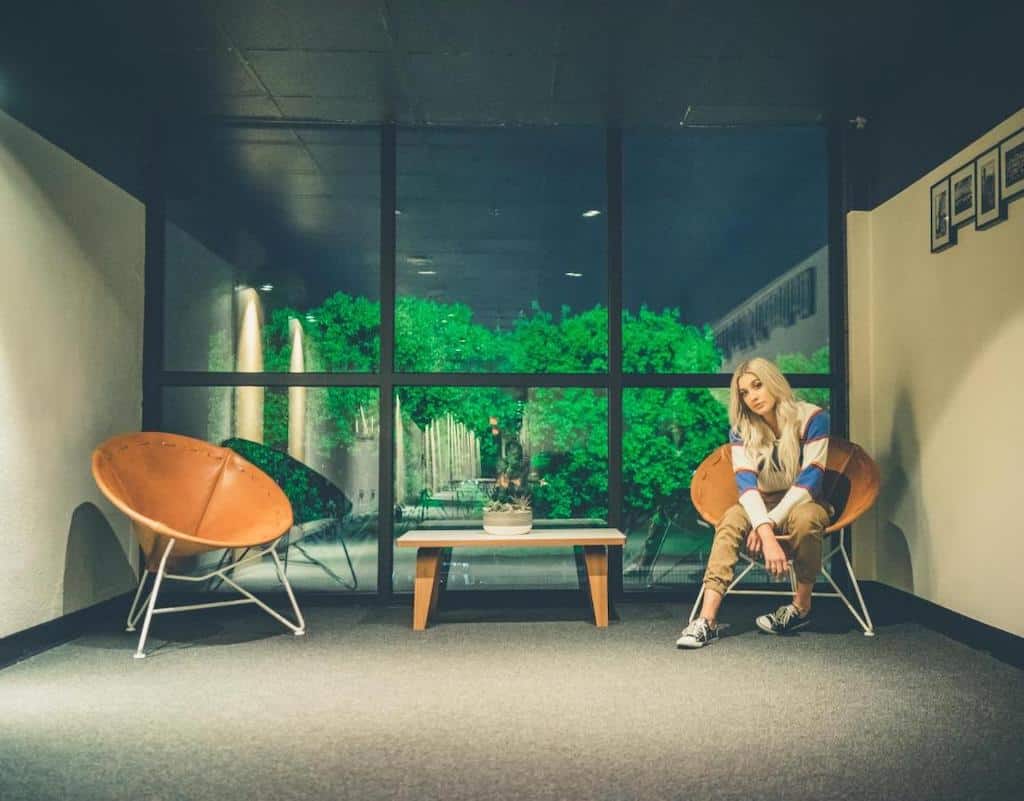 In the Corktown district, very close to the centre of Detroit, this trendy contemporary-styled hotel has a great vibe and is cleverly designed to make the spaces feel huge, modern and trendy. There’s a good choice of room sizes and suites, even one used by the Rolling Stones in 1964 when fans stormed the hotel.

There are lots of great amenities at Trumbull and Porter including plenty of car parking, a laundry room, a fitness centre and bicycles you can borrow to tour the city. There’s an excellent seasonal restaurant on-site and two bars, but it’s just a mile into Downtown if you want to get out and sample the full delights of Michigan hospitality, or less than a 10-minute walk to the riverfront – one of the only places in the US where you can look south into Canada! 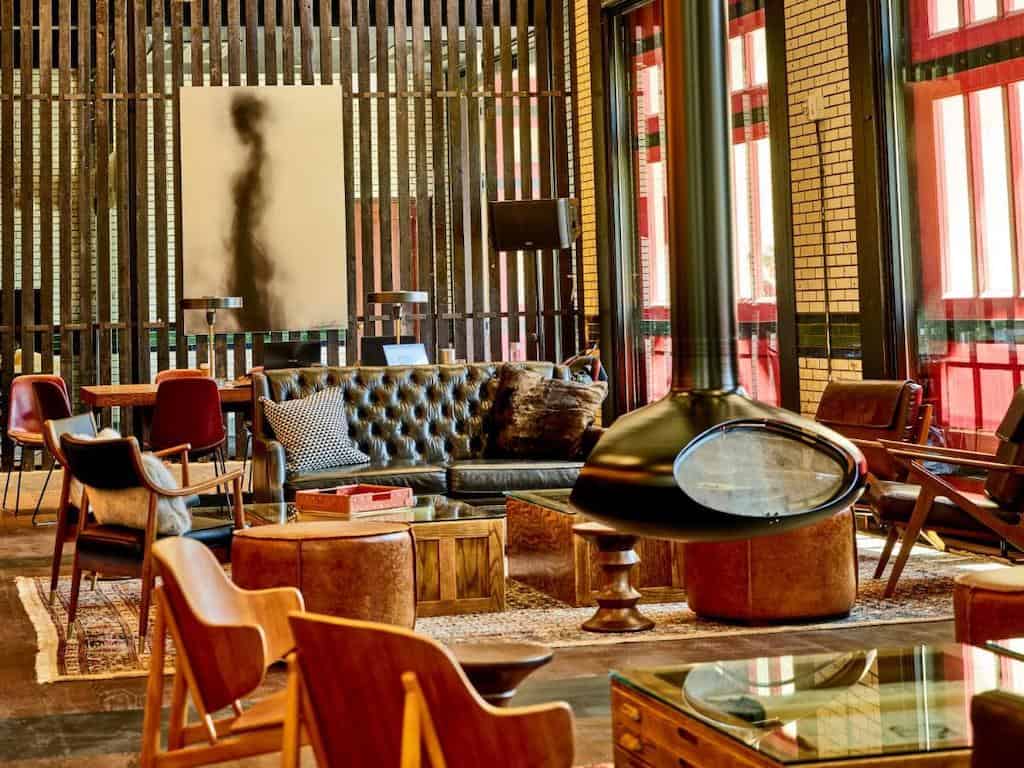 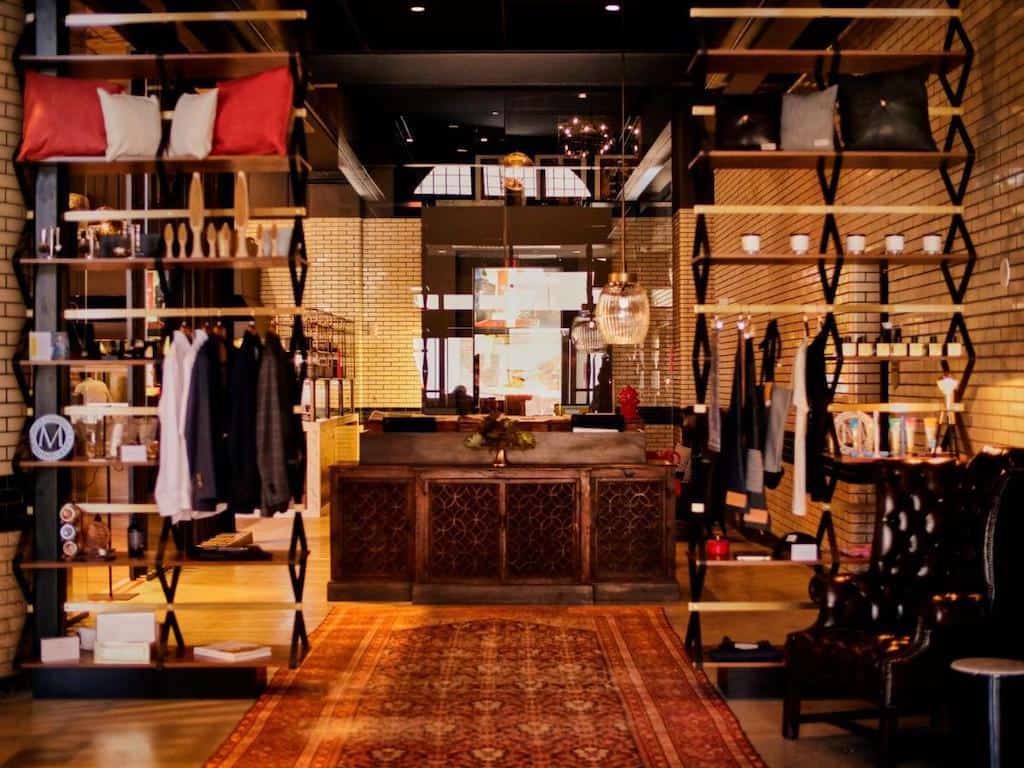 Between the Capitol City and the riverfront is the exceedingly lovely Detroit Foundation Hotel. Set in the city’s circa-1929 old fire department headquarters, this sleek, fashionable hotel in Downtown is 4 miles from the Detroit Institute of Arts, 5 miles from Belle Isle Park (a 982-acre island park) and right across the street from the Huntington Place Center and Joe Louis Hockey Arena.

Chic, classically furnished rooms are adorned with local artwork, modern lighting and comfortable club-style interiors. Local art features strongly throughout the hotel with interesting pieces being regularly displayed. On the ground floor, in the old apparatus room, there’s a really good restaurant and plenty of life in the immediate streets if you venture out. 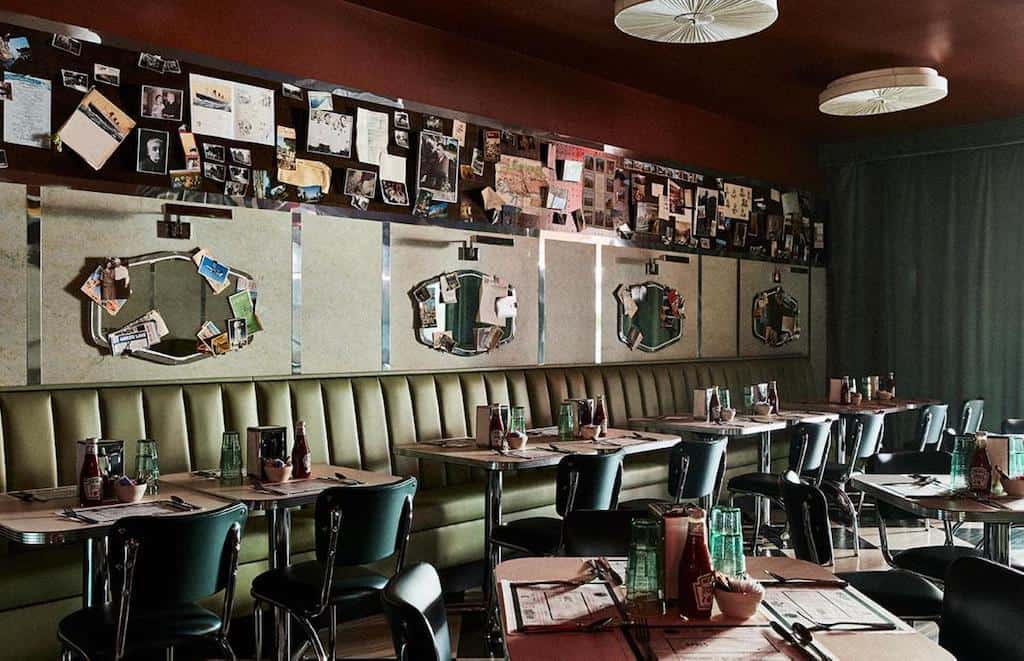 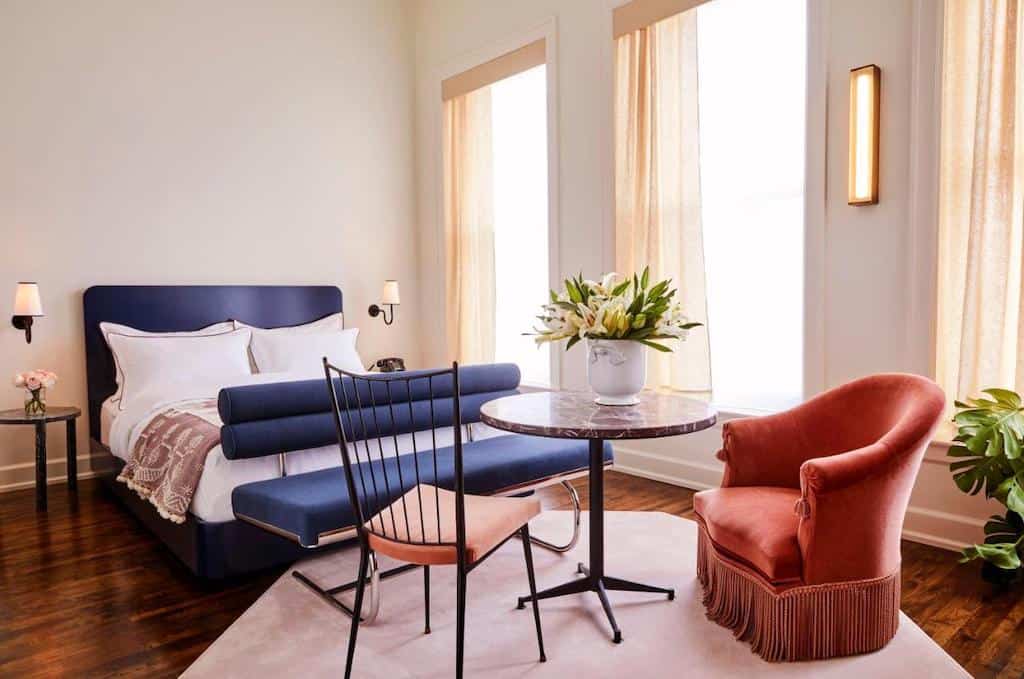 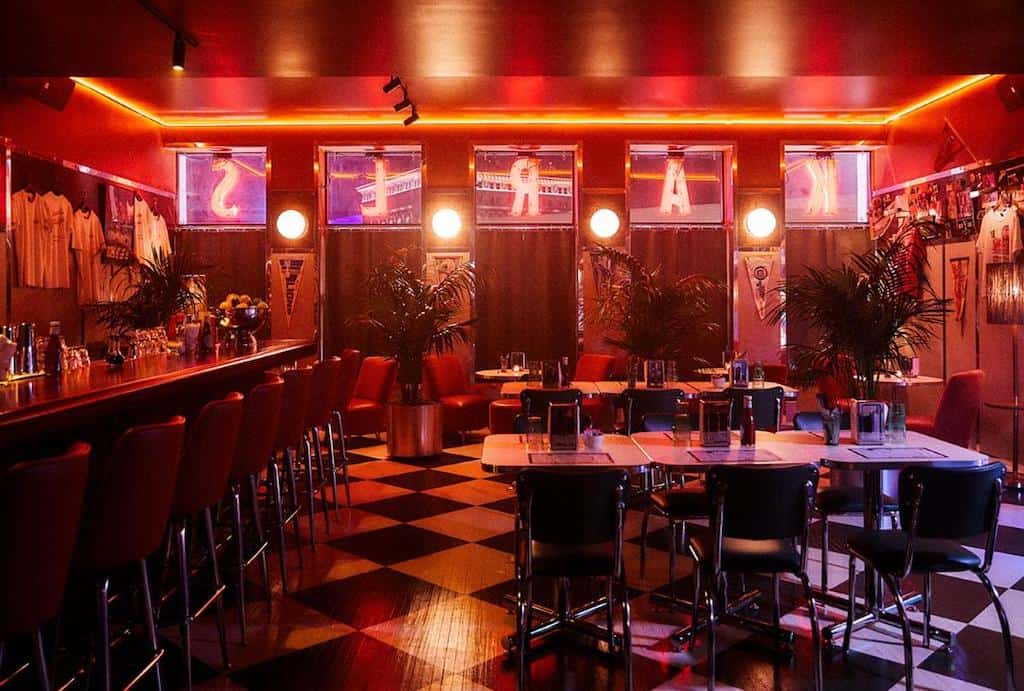 Not far from the Grand Circus, Comerica Park and Ford Field in the heart of Detroit is the majestic Siren Hotel in what used to be the Wurlitzer Building. A quirky retro hotel decorated in a Parisian style and celebrating, at every opportunity, the art and music that is ingrained in the culture of Detroit.

The rooms are small and comfortable, but the experience here is the public spaces and vibrant city all around. You will find a small coffee bar, a cute cocktail lounge, a fabulous classic American restaurant, a tiny haute cuisine restaurant for those who want to go posh, a piano bar, a vinyl record bar and even a barbers’ shop – before you have left the building.

Step onto the surrounding streets for a huge range of dining, entertainment and sporting venues all serviced by the People Mover monorail which loops around Downtown until midnight every day. 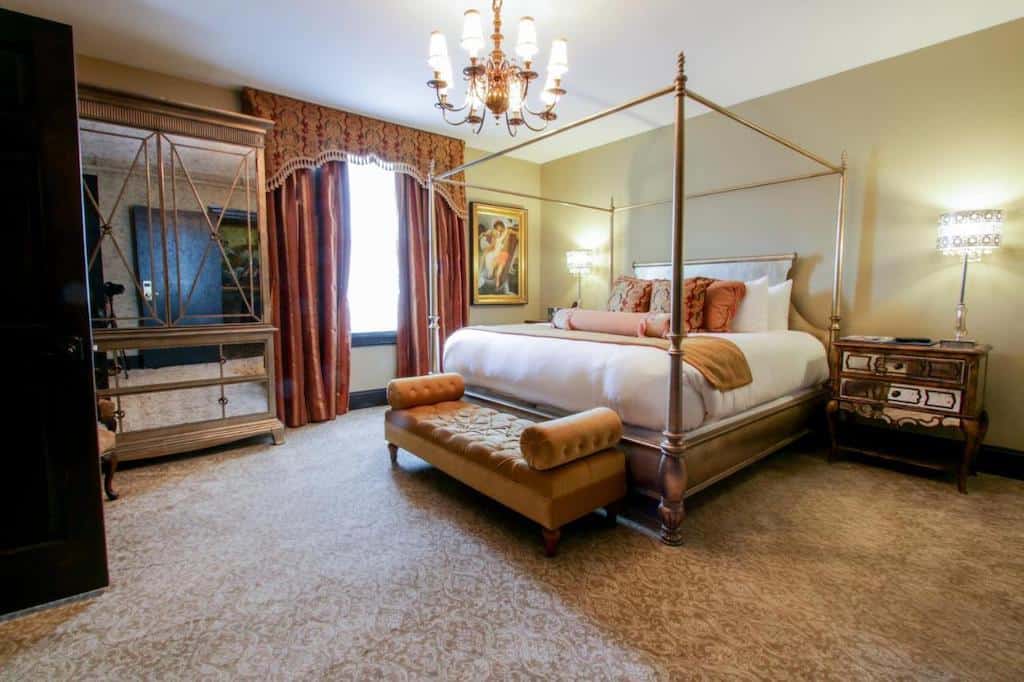 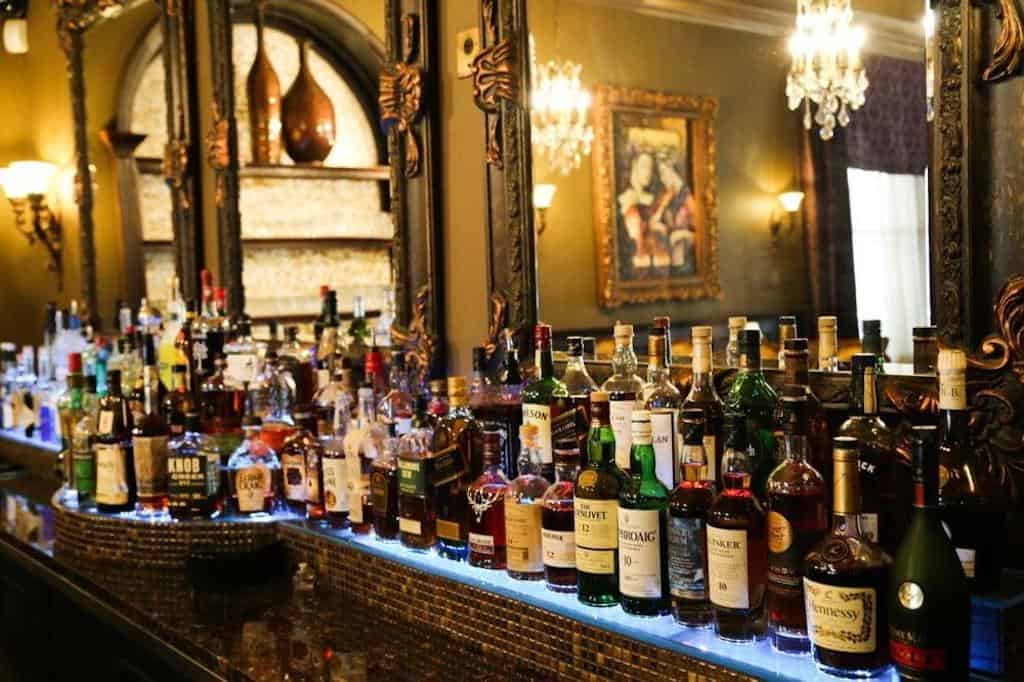 The oldest private members’ club in Detroit – this building is their second home, constructed in 1891 – The Detroit Club has 21 suites available for accommodation, just a stroll from the heart of Downtown. Rooms are sumptuously dressed in an attractive refined style befitting the elegant building with plenty of warm oak and heavy drapery.

In house there’s a thermal spa with treatments, a very smart restaurant, swish cocktail bar and gentlemen’s cigar bar; unfortunately, all these facilities are only open from Wednesday to Saturday – not much use if you’re having a weekend city break, but definitely a very memorable experience if you can book during the days when it’s fully open. 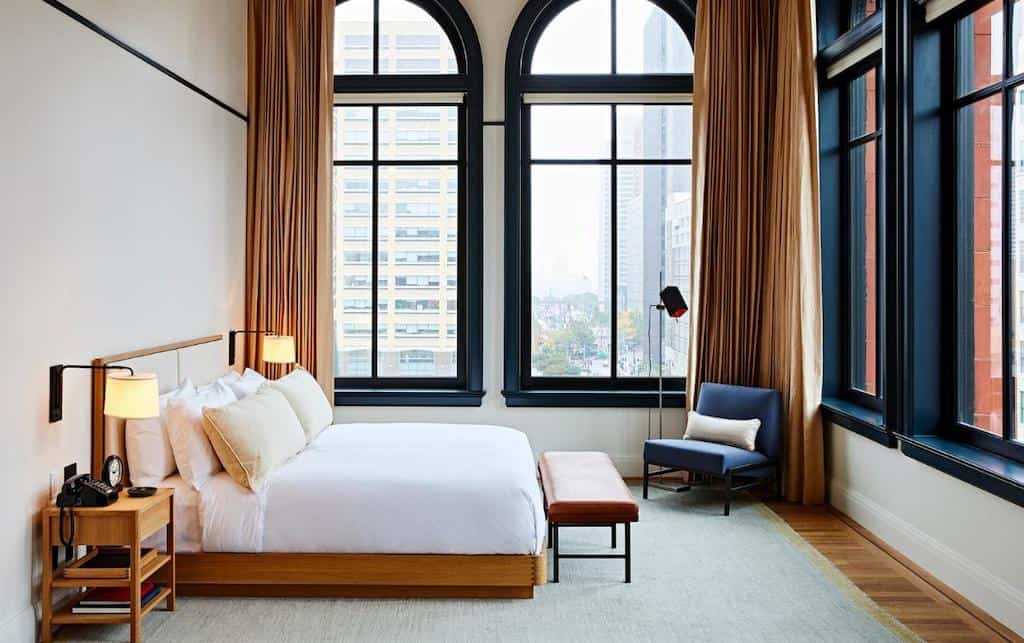 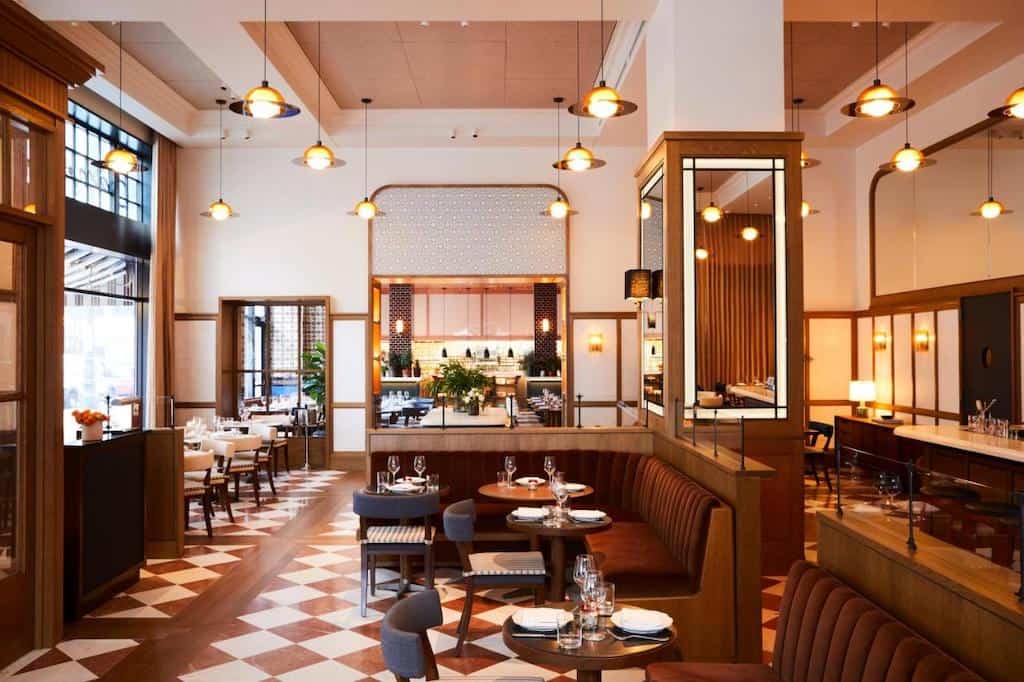 The Shinola Hotel is a thoughtfully curated, modern hotel in one of the best streets in Detroit. Rooms, suites and wonderful penthouses are deliciously presented with unique crafted furnishings that ooze retro styling and warmth.

The street, named Woodward Avenue, is an iconic boulevard reaching from the city of Pontiac in the north to Hart Plaza on the banks of the Detroit River, with its homage to the motor car.

The Shinola sits between Hart Plaza and the Grand Circus in the very heart of Detroit. This place reflects the eccentric, boom and bust entrepreneurial spirit of Detroit with delightful retro touches nestled alongside statement pieces. The hotel even hosts its own small enclave of specialist shops, known as Parker’s Alley, a very good Italian restaurant and excellent American bar. 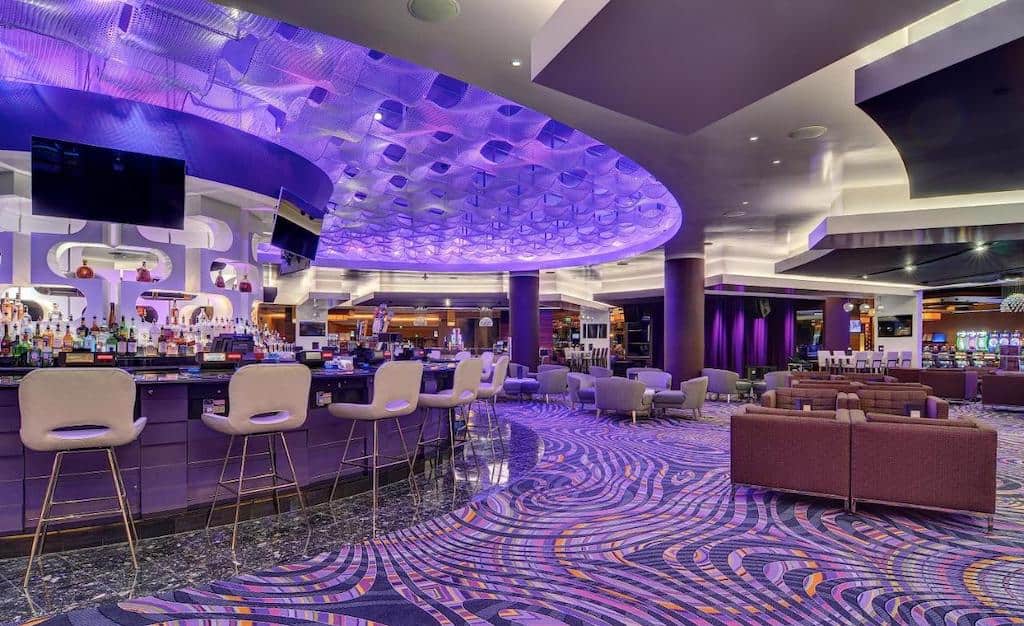 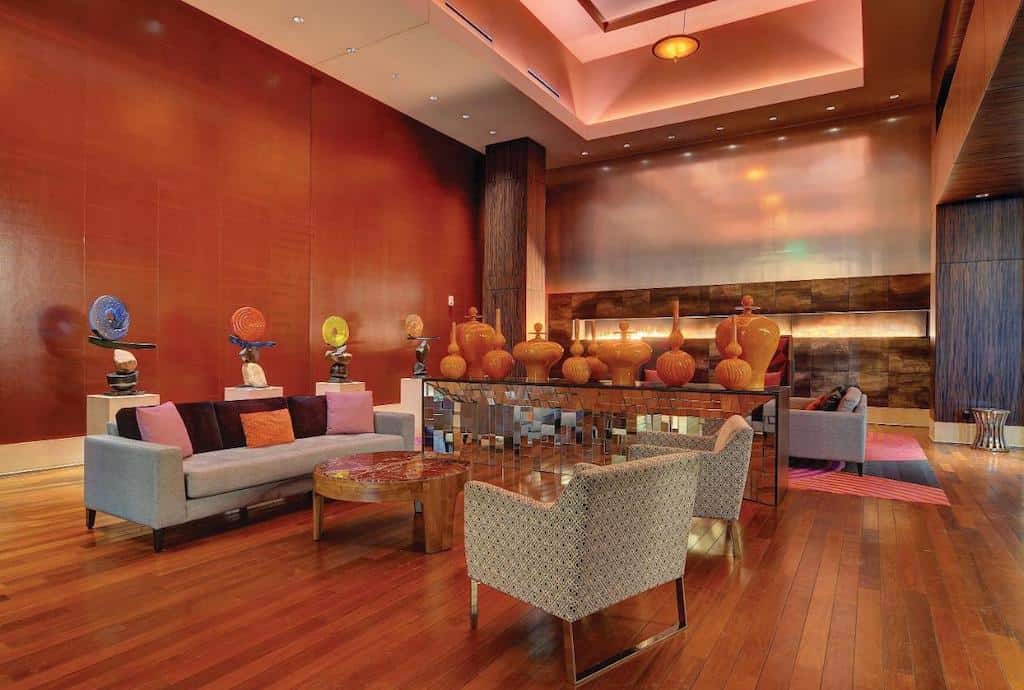 The MGM Grand Detroit is an enormous resort hotel with every amenity you could want, and more, including a famous casino. It feels more like something you might find in the mountains or Las Vegas, rather than Michigan, but here it is, just a 15-minute walk to Downtown Detroit. Close enough to feel connected, yet far enough away to enjoy the space.

There are endless variations on the 400 rooms and suites, with and without views across the city; all are big and dressed to slap you with colour rather than swamp the usual corporate browns.

The list of amenities is endless, with bars and restaurants, fitness, spa and wellness centres, a golf swing suite, shopping, even an entire concert arena and, of course, the casino with slot machines, poker and table games. There’s even the occasional MGM lion lurking around. 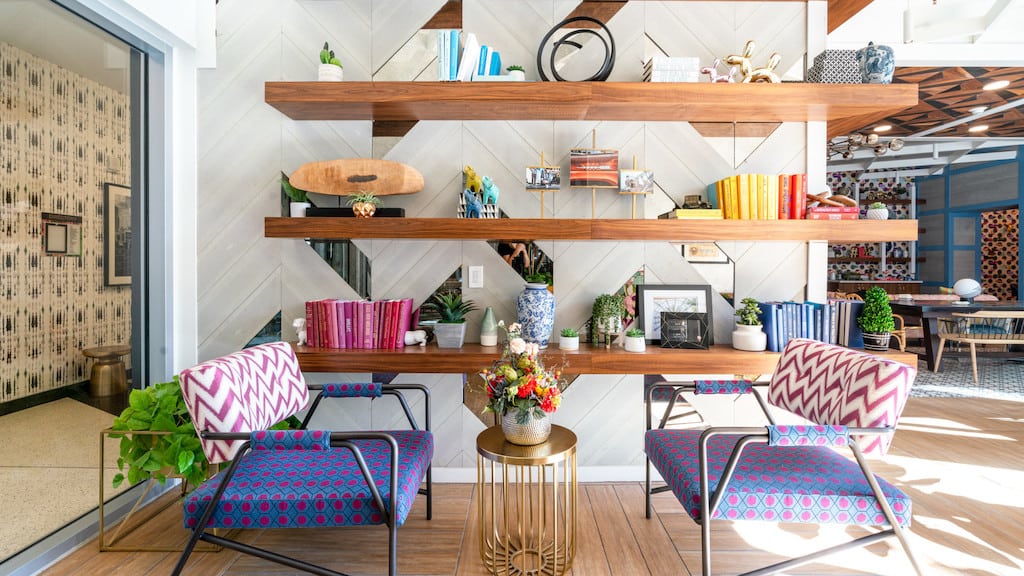 Barsala at City Club is an aparthotel, which means few staff but plenty of space in studio, one bed or two bed apartments. The modern spaces are bright, airy and tastefully furnished with unfussy, colourful designs.

There’s an added bonus here of a small rooftop pool, fitness centre and sauna, and undoubtedly a great location off Washington Boulevard in the heart of Detroit with bars, clubs and restaurants all around. Not the sort of place to choose if you like being waited on, but perfect if you want the freedom to explore this magnificent city at your own pace. 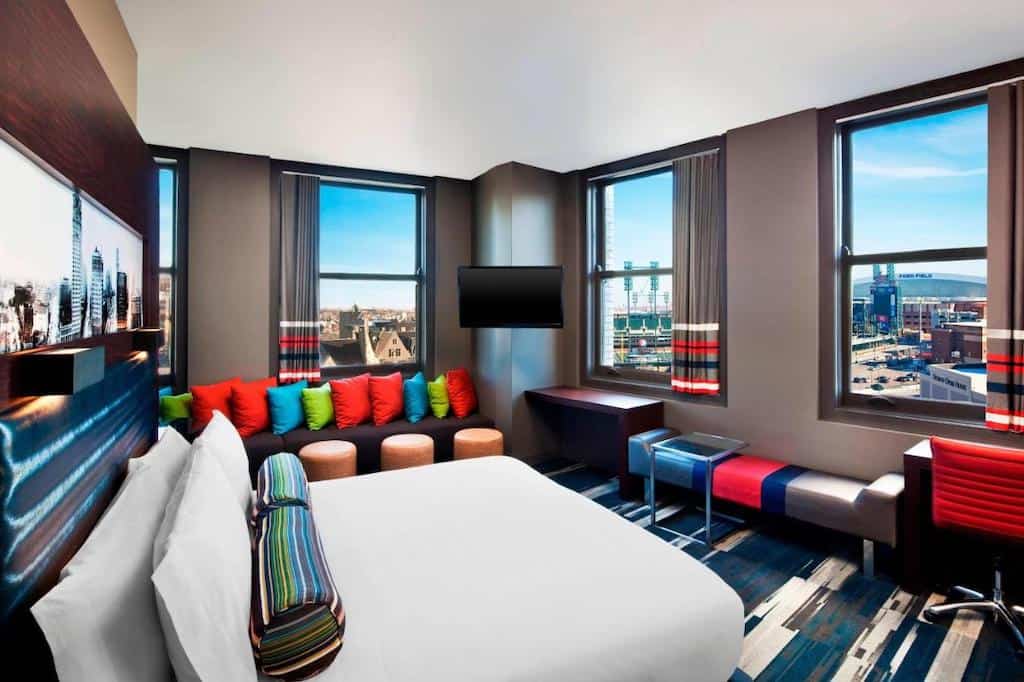 Looking out over the Grand Circus in the very epicentre of Detroit is Aloft Detroit at The David Whitney. Comerica Park, Ford Field, Detroit Opera House and The Fillmore are all less than ¼ mile from the doors and the People Mover light railway stops right outside.

It is a neat, contemporary hotel with modern, friendly European interior styling and an impressive central grand atrium respecting the beautiful David Whitney building, constructed in 1915. There’s a good choice of rooms, all bright and cheerful, a colourful little bar on site with a snack menu and a good fitness centre. A perfect balance of somewhere to sleep against getting out to the delights of Downtown Detroit. 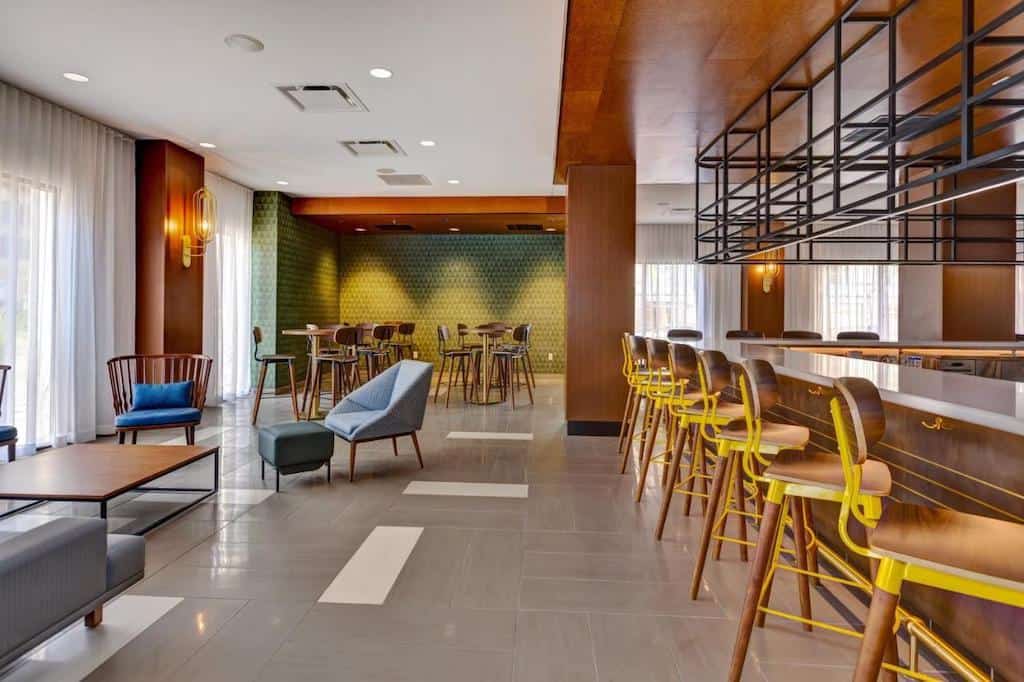 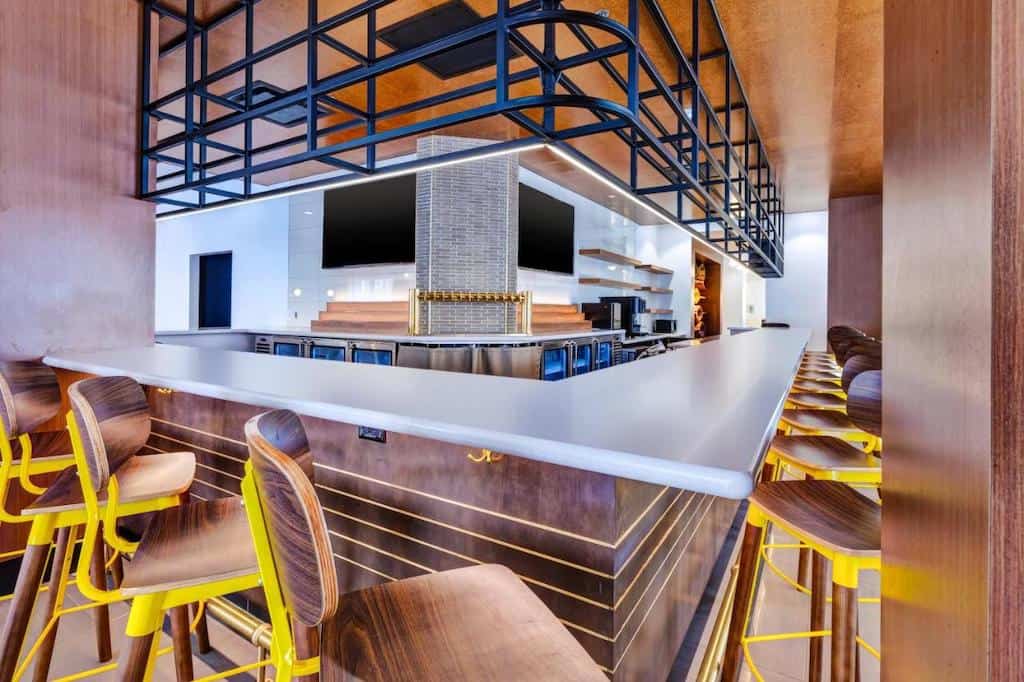 Smartly located on a corner of Washington Boulevard with easy access to public transport and all the local venues is the Hotel Indigo Detroit Downtown. There’s a massive choice from 241 rooms and suites, a modern fitness centre, a good bistro and a nice bar.

Much of the hotel has been recently renovated to add a shot of colour and design, but still manages to retain the look and feel like you’d expect from a big IHG Hotel. It’s just a short walk to the Huntington Place conference centre, Joe Louis Arena and picturesque Detroit Riverwalk with views across the Canadian border. 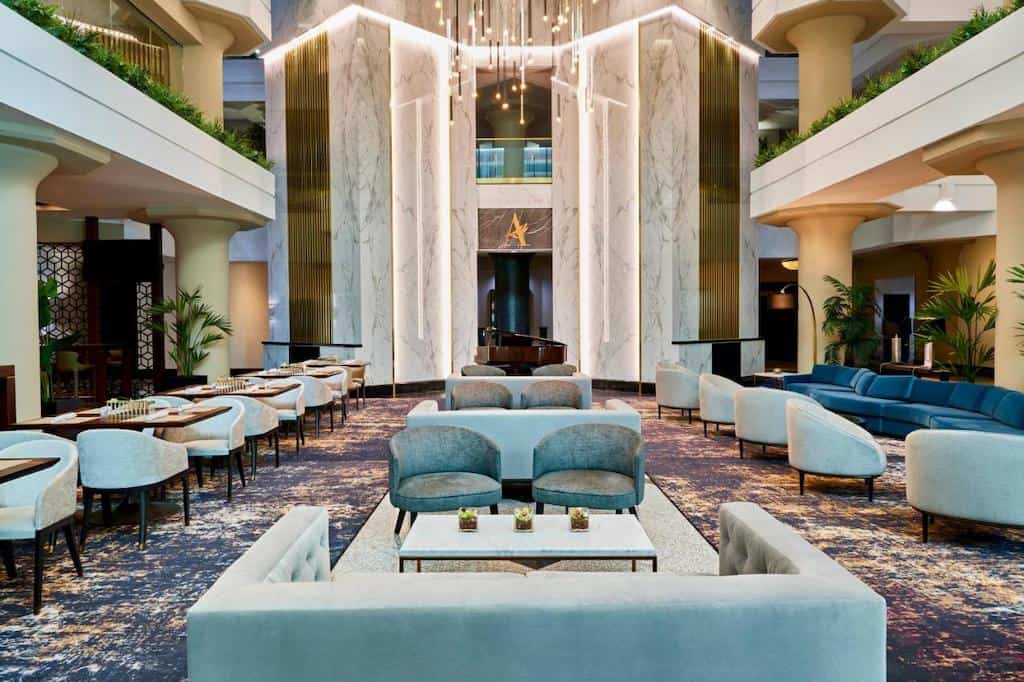 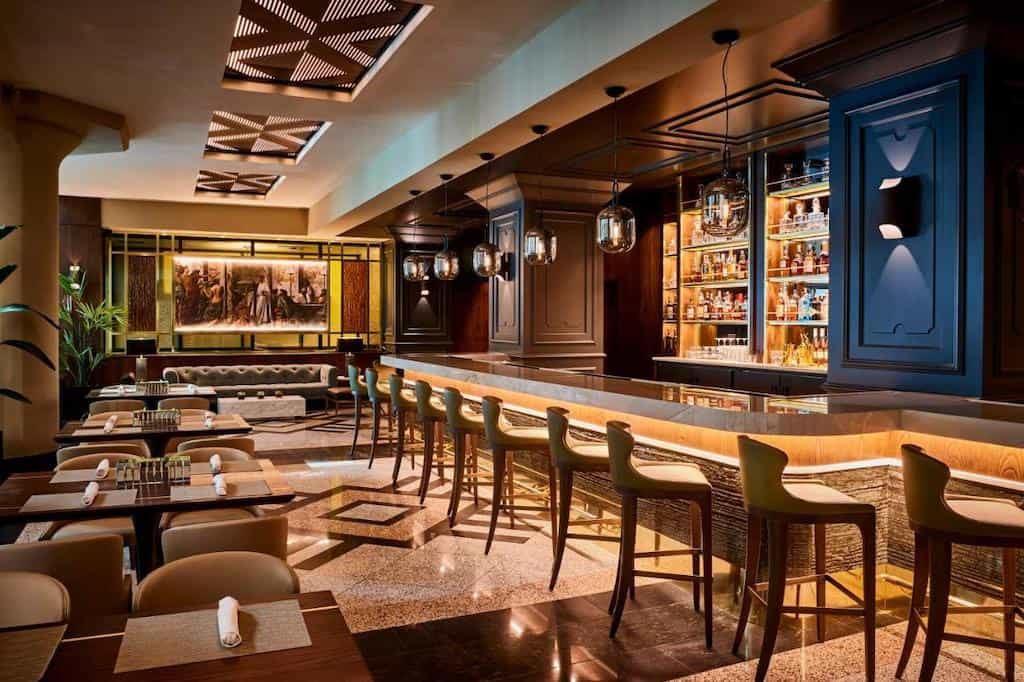 Adjacent to the famous Greektown Casino is the Athenium Suite Hotel. An indulgent hotel of 173 suites bedecked in slightly dated, yet honest hotel comforts. Constructed in the 1920s on the site of an old seed factory, hints of art deco remain throughout the public areas and huge columns soar through the storeys uniquely cutting through many of the guest rooms.

Greektown is a vibrant district of Downtown Detroit, buzzing with nightlife, gaming, restaurants, bars, and of course, the finest Greek cuisine. The Athenium is a genuine hotel with unpretentious quality confidently delivered in a booming neighbourhood. There’s the usual fitness centre and everything you could need, including an in-house barber. 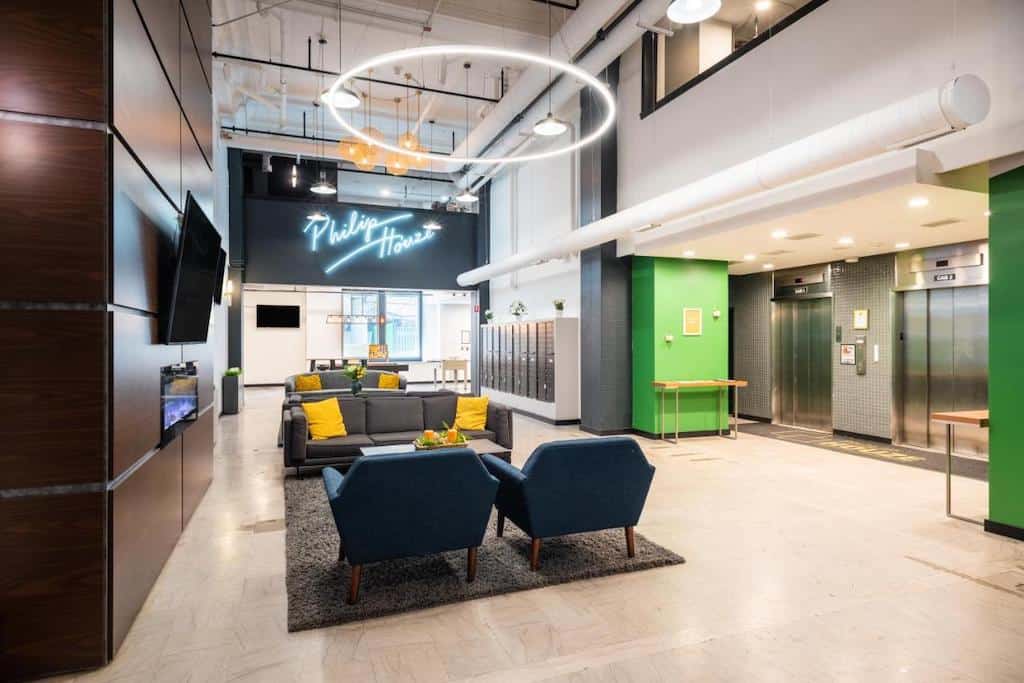 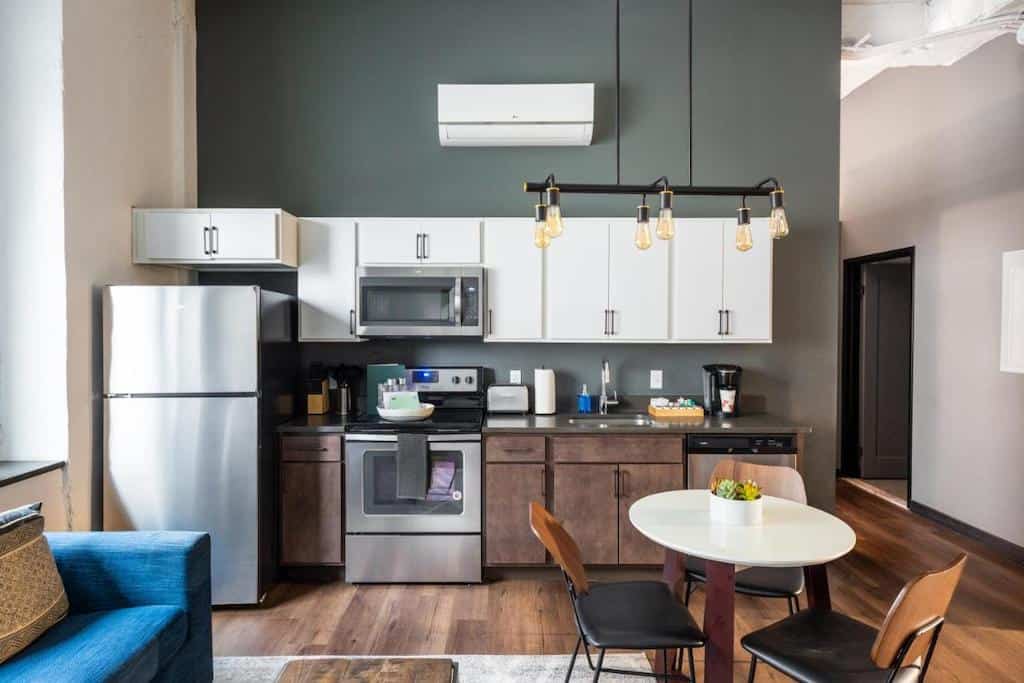 There are three Mint House aparthotels in Detroit, all centrally located. Don’t be fooled by the name on this one – Times Square is nothing like its New York namesake, it just happens to be the small street that runs past – however, it is a great location fully serviced by public transport and an easy walk to most of what Downtown Detroit has to offer, both the business and leisure districts.

Mint House has sharp, big, studio, 1 bed or 2 bed modernist (lots of white) apartments kitted out with everything you might need. There’s a small gym and shared space if you’re feeling sociable, otherwise just sensible, practical spaces to enjoy your stay. 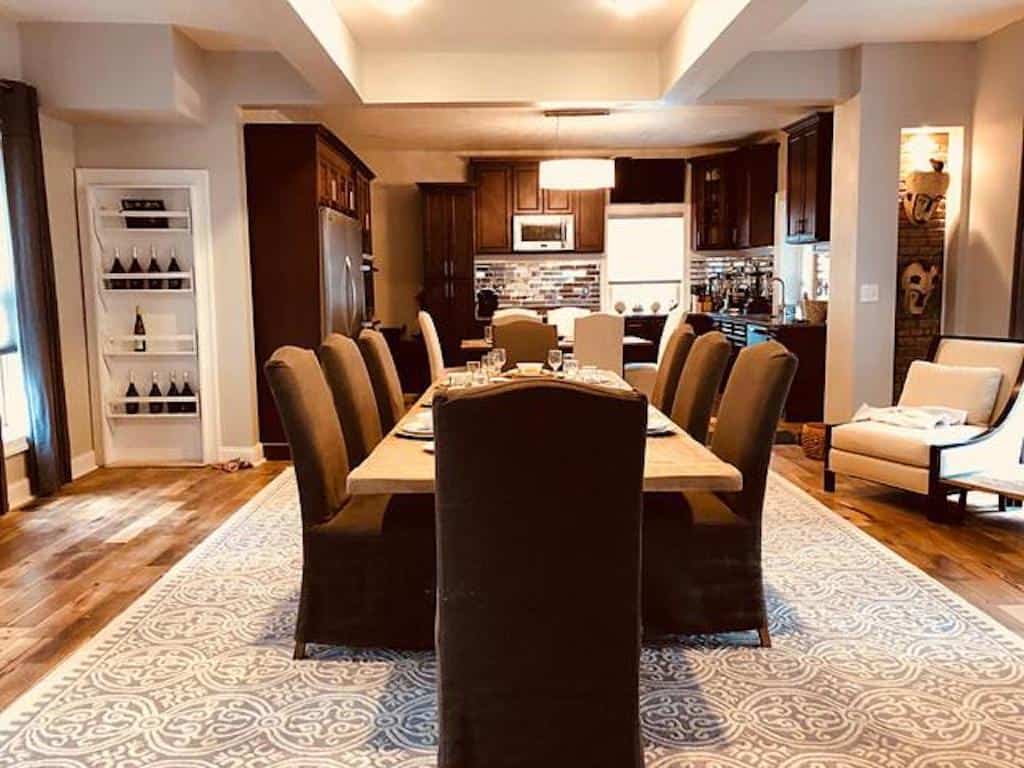 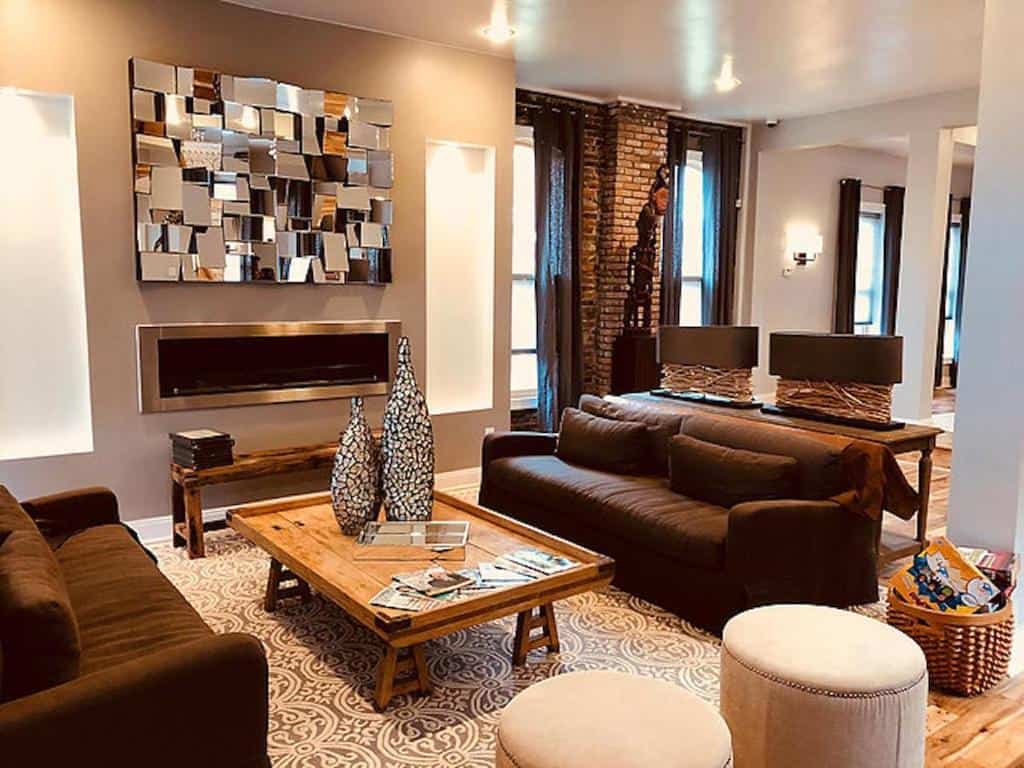 A delightful remnant of Detroit’s history, just across the freeway from Comerica Park and Ford Field, yet like stepping back in time to grander days. This 19th-century mansion has been saved from ruin and updated to provide genuine, bright luxury accommodation with thoughtful modern facilities and more than a hint of Motown.

There are just three beautifully furnished rooms and suites for adults only, or you can book the entire building for a special event. The shared areas are sumptuous, but modern and creative, rather than antiquated. This is Detroit as it should be seen, with twists of old and new colliding to make something precious and fun. And just a short walk to the Downtown buzz.