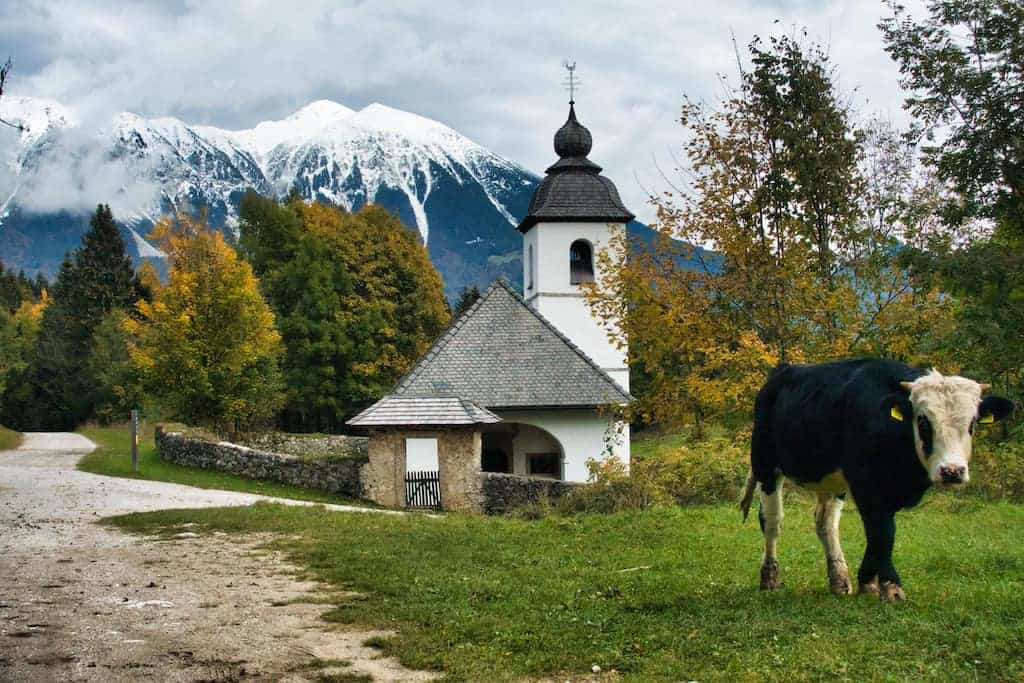 Considering its size and population, Slovenia is among Europe’s smallest countries. It is a country that is often overlooked as its bordering countries Italy, Croatia and Austria seem to enjoy a much better reputation among tourists all around the world.

I was one of these tourists until I set out to make my own impressions in October 2020. Seeing Slovenia’s diverse and breathtaking landscapes and visiting its lovely towns made a lasting impression on me, which is why I would like to share my experiences and recommend 12 of the best and most beautiful places to visit in Slovenia that should be on every traveler’s bucket list… 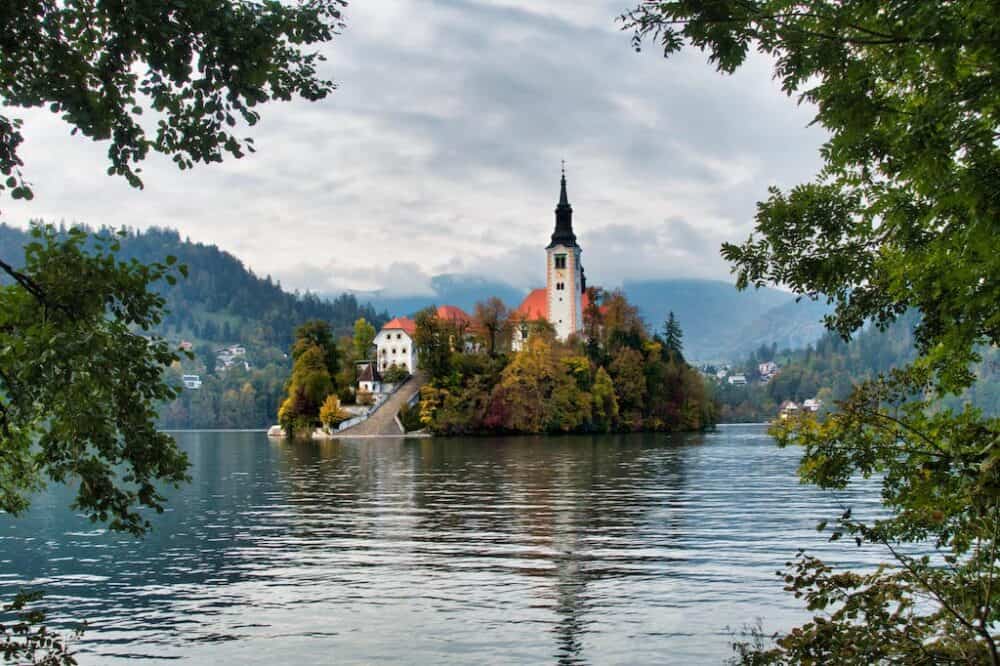 As Slovenia’s most famous tourist attraction, Lake Bled and the Pilgrimage Church of the Assumption of Maria on the small island in the middle of the lake are an absolute must-see.

The legend about the origin of Lake Bled says that a bunch of reckless, young shepherds let their sheep graze on the holy, green pasture where the chapel was built on.

God judged this behavior as an act of desecration, which is why he decided to protect this holy place by creating a lake around the chapel.

Top things to do at Lake Bled are making a boat trip to the Pilgrimage Church of the Assumption of Maria and ringing the church bell, visiting the Medieval Bled Castle that is built on a precipice above the lake, and hiking up to Mount Ojstrica to enjoy breathtaking views. 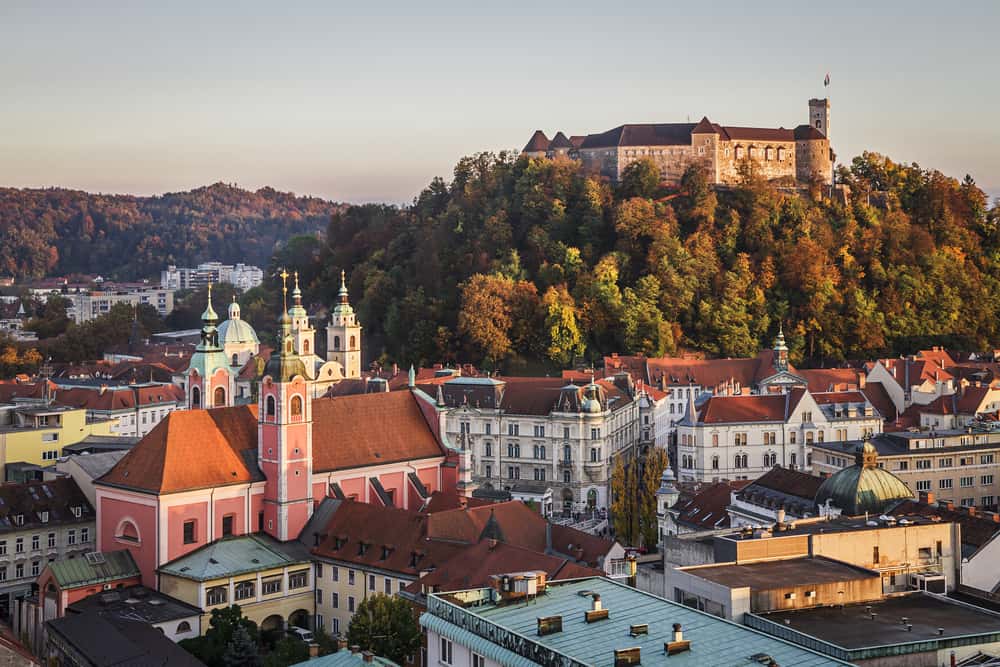 With only 293,000 residents, Ljubljana is one of the smallest, but at the same time greenest and most enchanting capitals in Europe.

Having a dragon as the symbol of the city, Slovenia’s capital impresses with its charming old town, the Dragon Bridge, and the Ljubljana Castle, which is the key landmark of the town.

The city is rich in history and its beautiful architecture and green surroundings make it almost impossible to not fall in love with Ljubljana.

Vintgar Gorge – beautiful wooden walkways through a miracle of nature 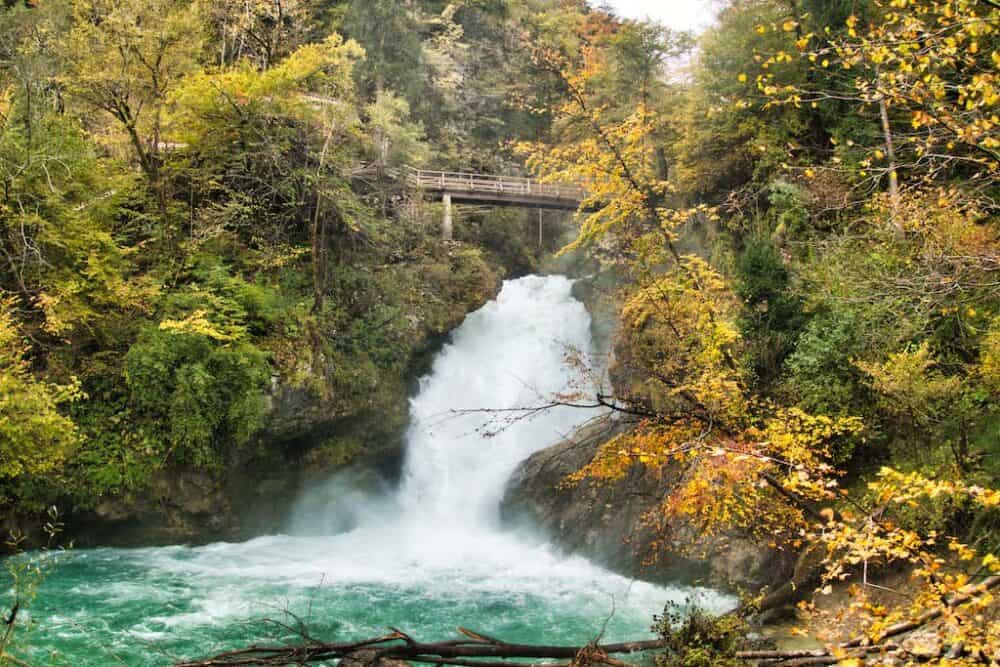 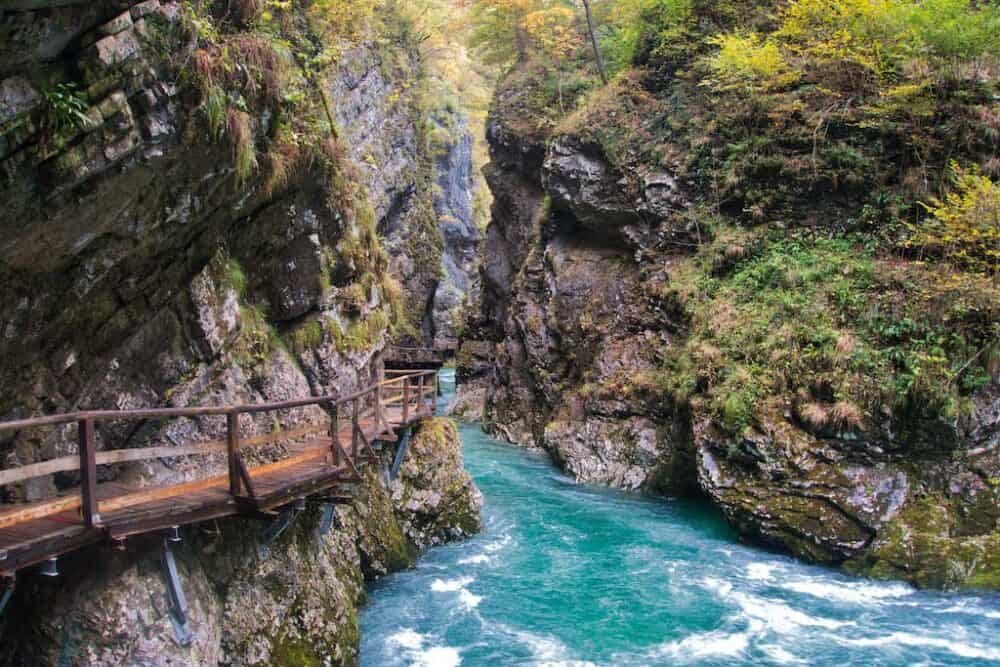 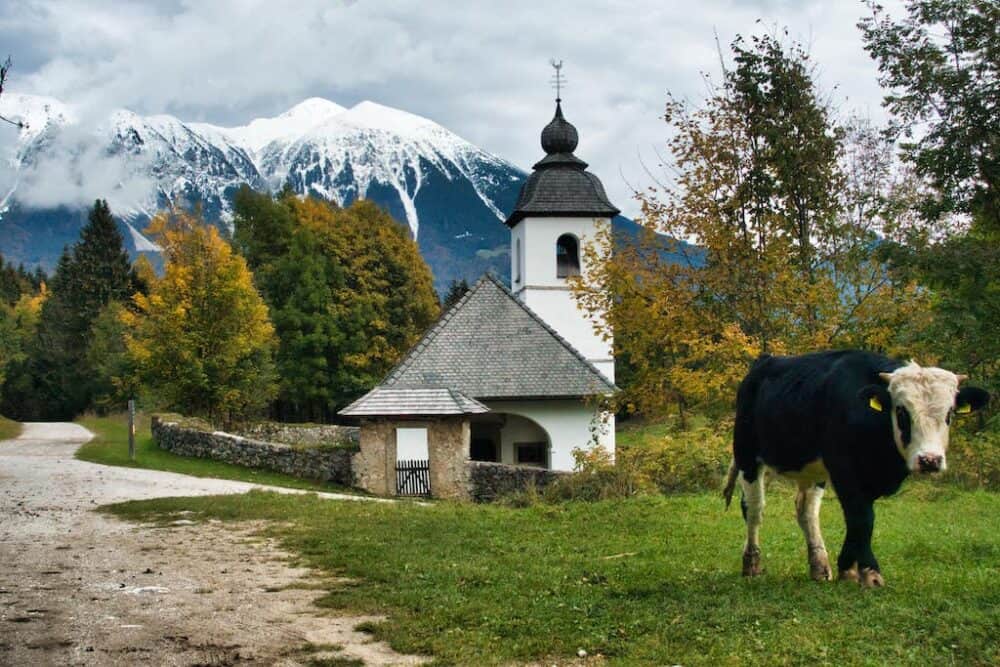 Vintgar Gorge is a 1.6 kilometers long gorge in Triglav National Park. By paying an admission fee of €10 you can follow the one-way wooden pathway which was constructed underneath sheer rock walls and explore the narrow canyon which has been formed by the Radovna River.

The turquoise shimmering water weaves its way through the narrow canyon – a mesmerizing spectacle of nature. The whole walk takes about one hour and ends with a big bang: the 15 meters high Šum waterfall! 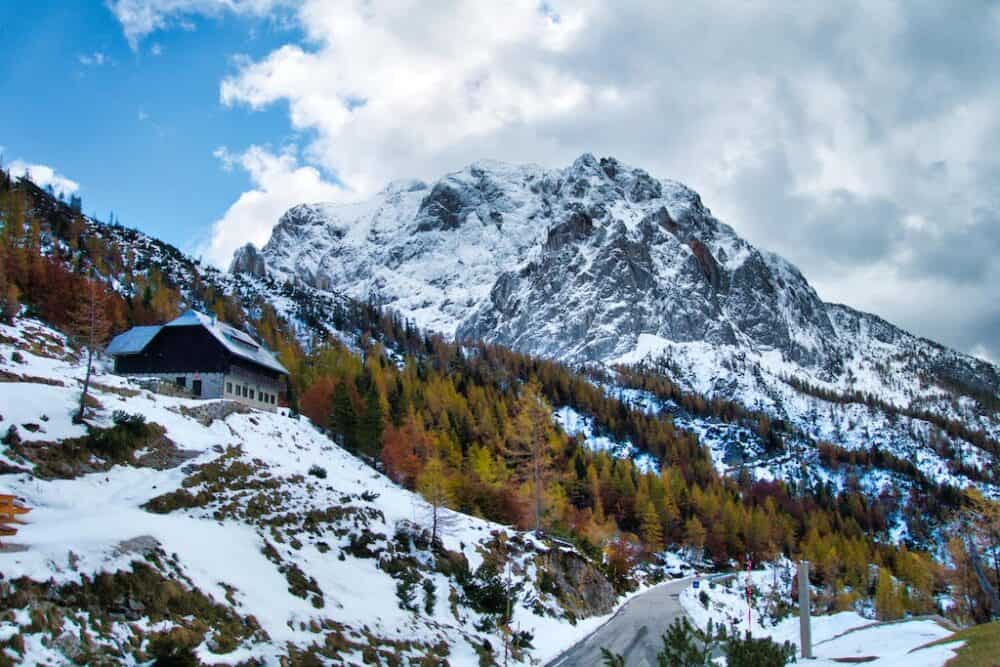 The Vršič Pass in the Julian Alps was built by Russian prisoners for military purposes in 1915 and reaches an altitude of 1,611 meters, which makes it the highest mountain pass in the country.

Driving along this pass in good weather offers clear sight over snowcapped mountains and it is almost impossible to drive the Vrši? Pass without stopping at every viewpoint to take pictures and enjoy the stunning landscape. 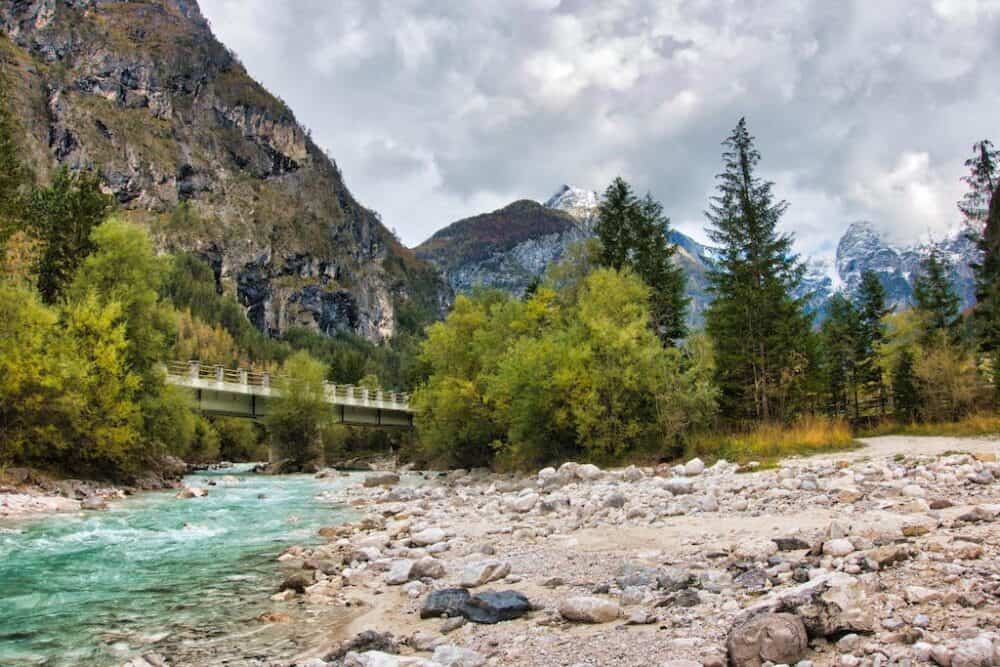 The Soa is a 138 kilometers-long river that is especially known for its turquoise color. What impresses the most is the so-called “Grand Canyon of So?a”, a section of the river where it winds its way through a narrow canyon of sharp and rugged rock formations.

Another place in Soa Valley that is worth seeing is the Boka waterfall. It takes only 15 minutes of hiking to reach the viewpoint which reveals the two-stage waterfall with an overall height of 139 meters. 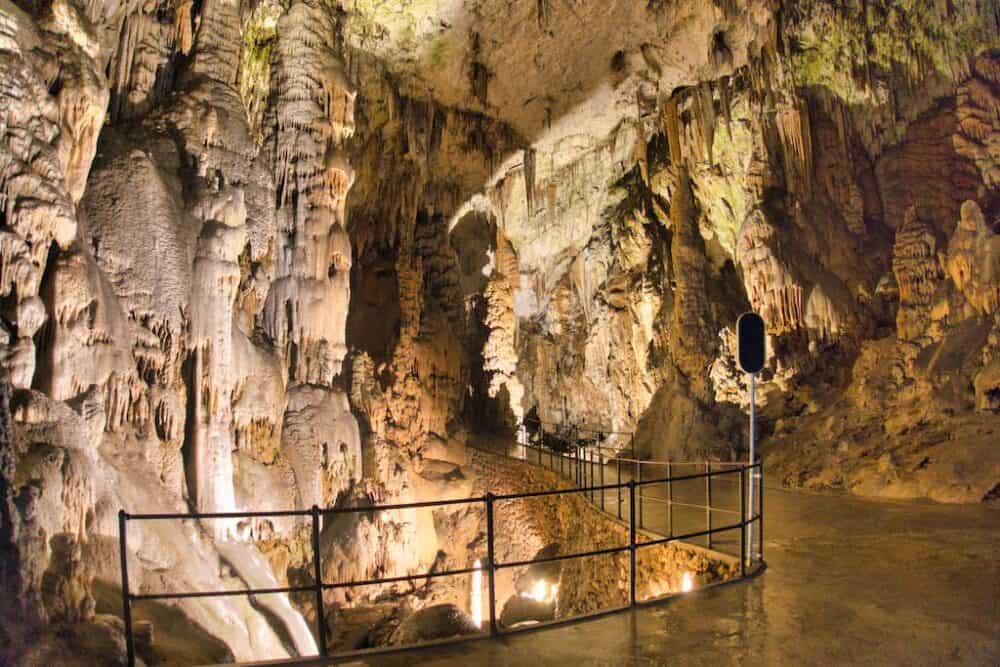 The Postojna cave is considered as Europe’s most visited tourist cave. Already in 1818, the karst cave system, which has a total length of 24 kilometers, was prepared for visitors, back then, particularly for Franz I, the first emperor of Austria.

Today, visitors are brought 4 kilometers deep into the cave by train, which allows them to explore the most beautiful parts of the cave with a multitude of stalagmites and stalactites in all shapes and sizes.

On special occasions, it is even possible to visit concerts and events in its biggest chamber. 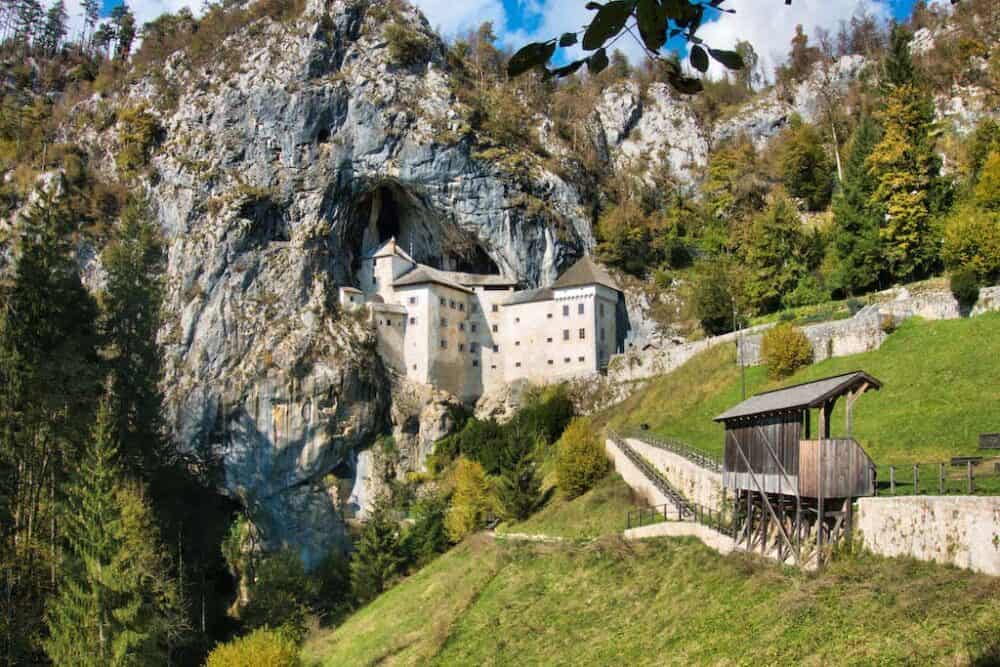 Only 10 kilometers from the Postojna Cave is another spectacular attraction, a Renaissance castle which was built within the mouth of a cave in the small village of Predjama.

The medieval Predjama castle was already built in the 12th century and you can visit its interior and parts of the cave under the castle as part of different tours.

Piran – the gorgous pearl of the Mediterranean 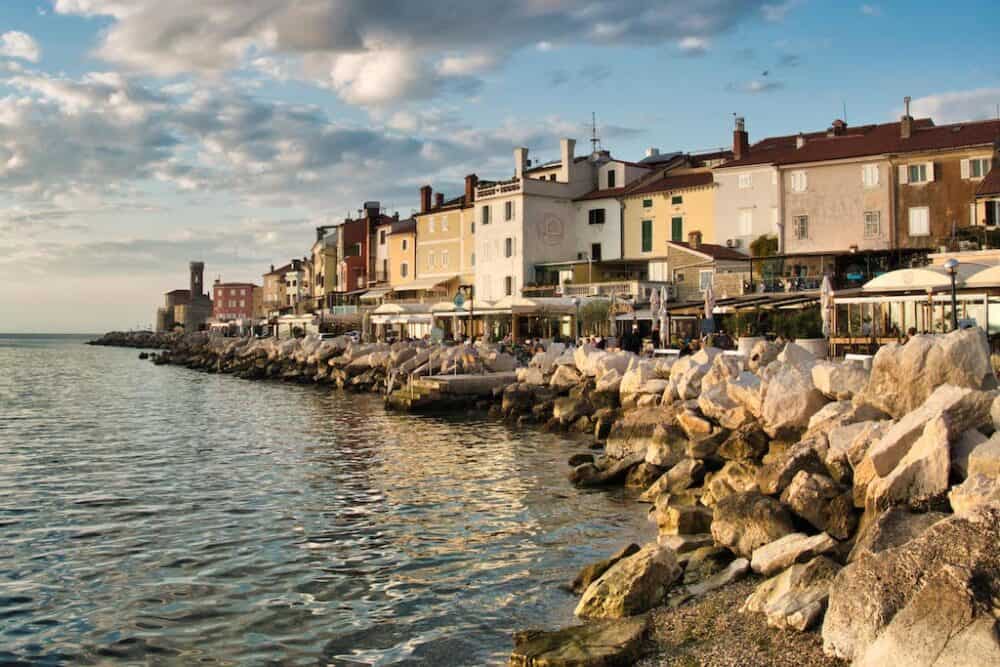 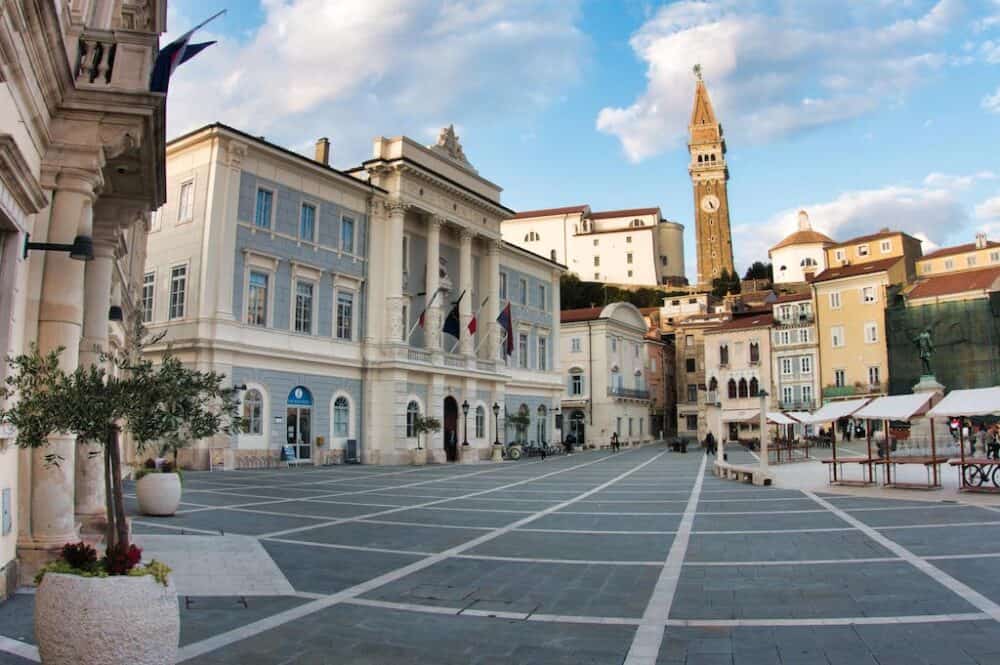 The coastal town Piran is the proof that Slovenia is so much more than just mountains, lakes, and forests. By heading south towards the coast, rugged mountain ranges and thick forests are replaced by promenades with palms, medieval buildings and above all – the Adriatic Sea!

Stroll through narrow streets in Pirans picturesque old town, climb the iconic bell tower of the St. George’s Parish Church, explore the city walls of Piran or simply enjoy the salty sea air while making yourself comfortable in one of the many lovely cafes and restaurants. 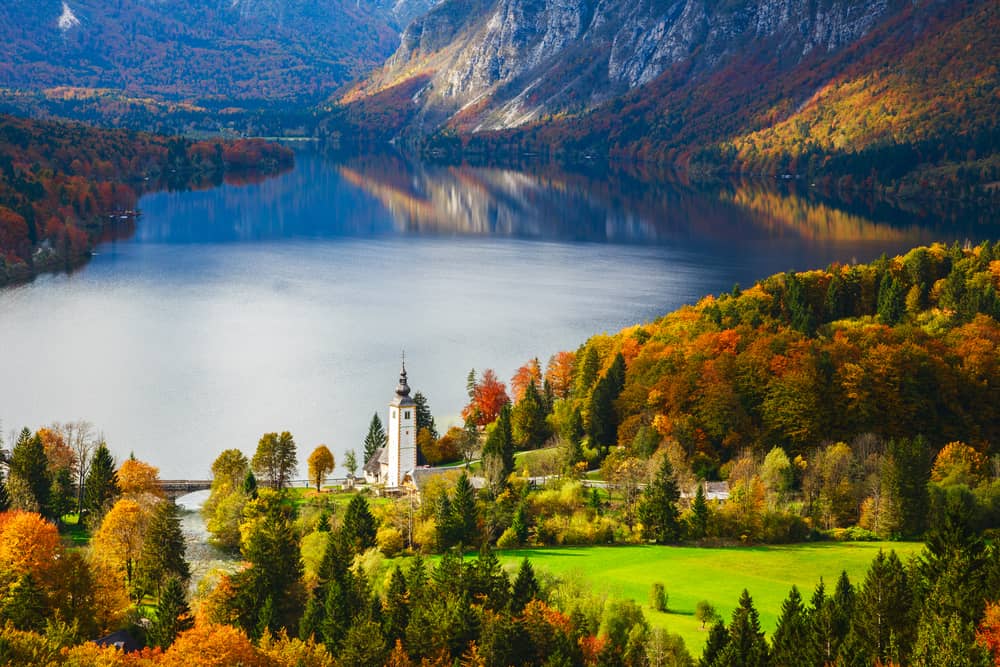 Lake Bohini offers plenty of free time activities for families, nature enthusiasts and adventurers. Explore the area by walking 12 kilometers around the lake, hike to the Savica Waterfall which is considered as Slovenia’s most beautiful waterfall, visit the St. John the Baptist Church and rent a boat, kayak or canoe and paddle your way around lake.

Another top thing to do at Lake Bohinj is to either take the cable car or hike up to the peak of Mount Vogel.

From up there you can enjoy spectacular panoramic views of the Julian Alps at an elevation of 1537 meters and, in case you are a fan of winter sports, go skiing in one of Slovenia’s most popular ski resorts.

Compared to the Postojna Cave, the Škocjan Caves are a little less touristy and do not have a comparable number of stalagmites and stalactites. However, what makes the Škocjan Caves at least as interesting and spectacular is the high concentration of natural wonders and its sheer vastness.

It is here that the Reka River created the world’s largest underground canyon and a cave system with several natural bridges, waterfalls, passages, and swallow holes. Exploring enormous underground chambers like the Martel Chamber and the Murmuring Cave will be an unforgettable experience with lasting impressions on every visitor of the Škocjan Caves. 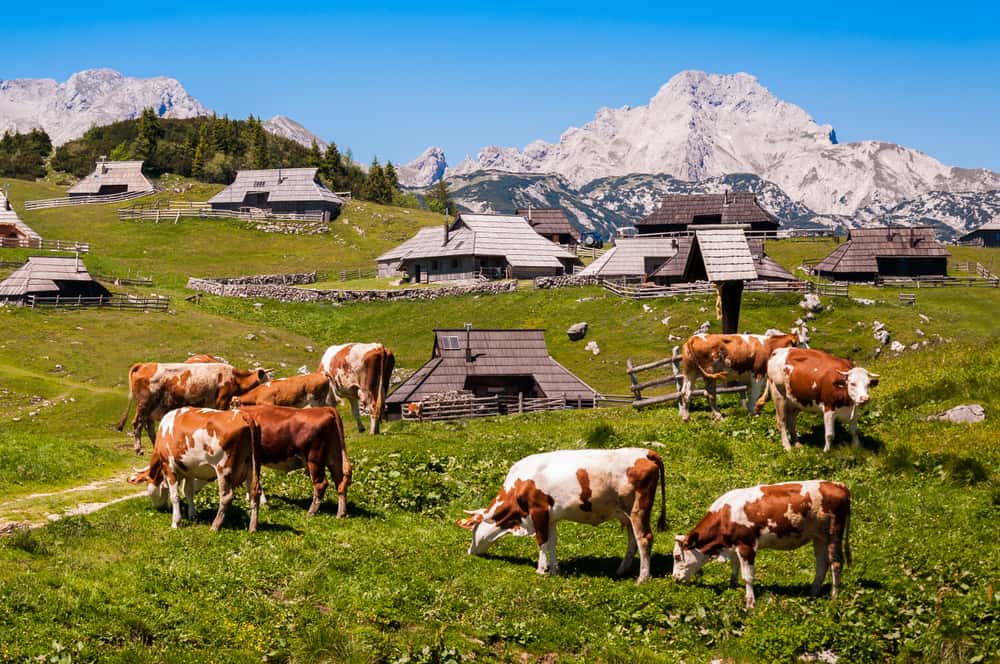 Slovenia’s most famous mountainous plateau impresses with a multitude of hiking trails, spectacular views of the Kamnik-Savinja Alps, the medieval town of Kamnik, and scenic attractions like the spring of the Kamniška Bistrica River and the Predaselj gorges.

A special highlight of the Velika Planina Plateau is one of Europe’s last remaining high mountain shepherds’ settlements with 64 wooden huts. Here you will have plenty of opportunities to taste and buy organic, traditional cheese with unique flavors and try local dishes from the Alpine shepherds. 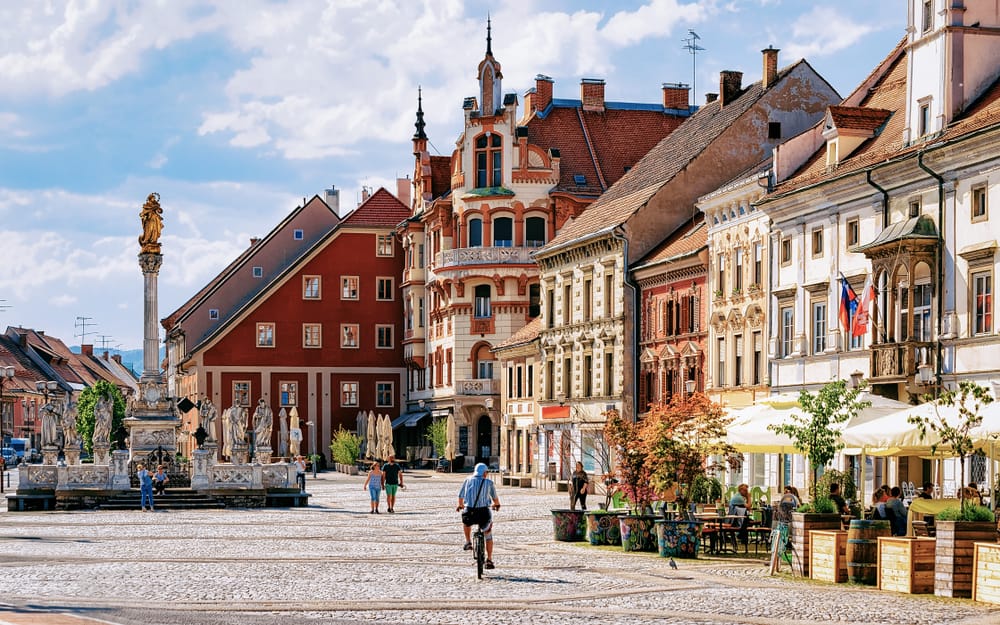 Located in the north close to the Austrian border, Maribor is often overlooked by tourists and overshadowed by the capital Ljubljana. But taking a closer look at its highlights like its charming old town and its green surroundings with picturesque vineyards, one must conclude that Maribor is worth visiting.

Stroll along cobblestone streets and visit the colorful Glavni Trg square, marvel at historical and medieval buildings like the Maribor Castle, hike up the Piramida hill in the city park, and take a look at the oldest vine in the world that grows in the Old Vine House since the 17th century.

Words and photos by blogger Christian Brandt. Christian began exploring the unspoiled nature of Swedish Lapland in 2013 then took a road trip to USA and Canada and decided to explore as many corners of this beautiful planet as possible and share his experiences with other travelers! Since then he left Germany and started his new project the Giving Getaway is an aim to build the world’s biggest travel database, use this database to create unique customized travel plans with the help of competent travel experts and take parts of the profits, invest them in charity projects and make this world a better place.