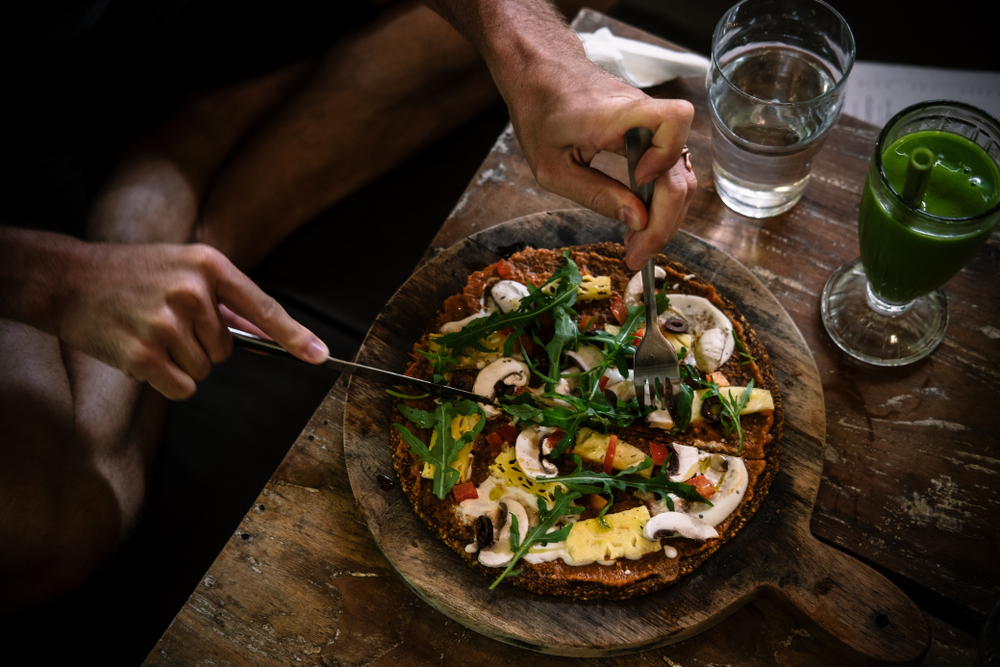 Portland is one of the best cities for herbivores, and if you happen to love pizzas too then you’re really in luck – Portlanders have some of the best vegan pizza joints in the US and tasty toppings include spicy tofu meatballs, vegan sausage and cashew cheese. From casual takeaways to trendy joints where you’ll want to be seen, here are the best places for vegan pizzas in Portland, Oregon (in no particular order, they’re all awesome)... 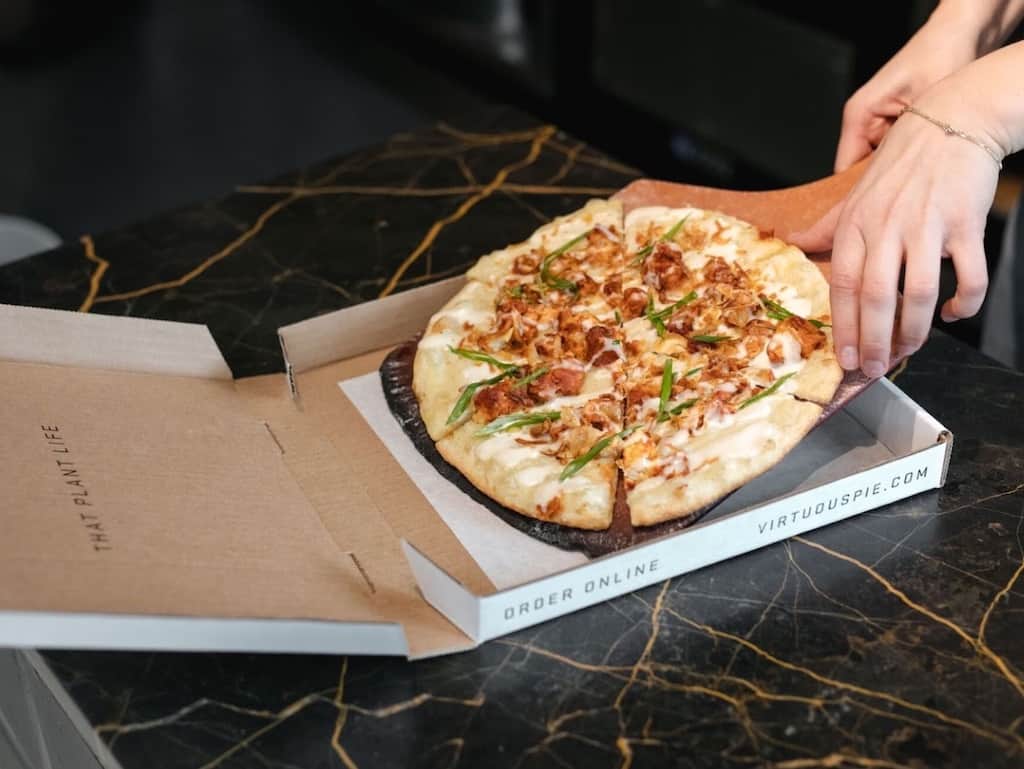 Virtuous Pie is one of the most popular vegan pizzerias in Portland, famous for its hand-stretched specialty of personal pizzas with a creamy nut-based cheese blend. This pizzeria is the home of creative and inventive plant-based combinations to create the most indulgent pizzas.

For instance, their rendition of the classic Italian sausage is prepared with caramelized onions, sautéed mushrooms, and a savory pesto sauce prepared with arugula and walnuts.

The Virtuous Pie compliments its pizzas with hearty vegan sides, and their roasted eggplant dip is a riot of scintillating flavors.

2. Secret Pizza Society – tasty vegan and  vegetarian pies with a variety of toppings 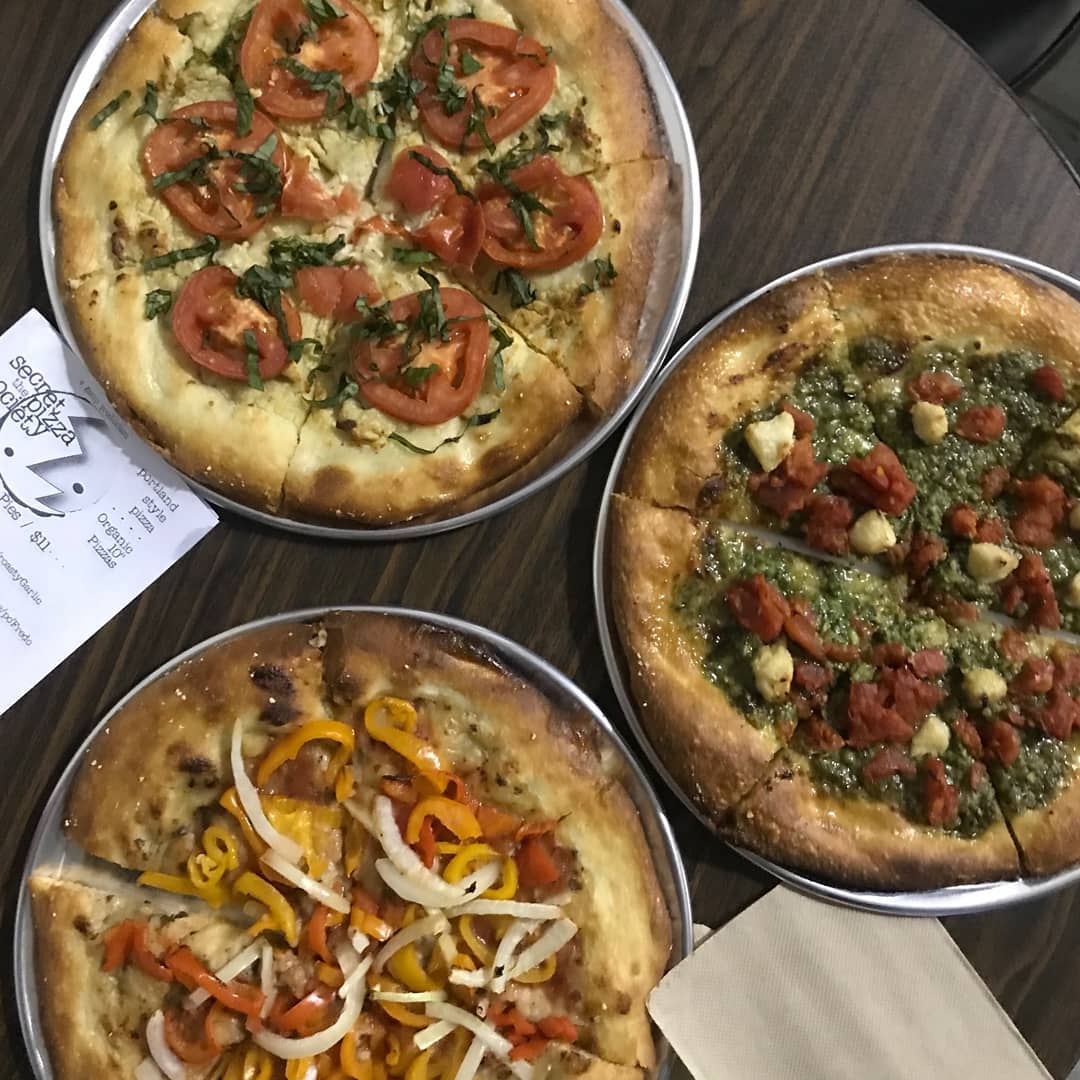 The Secret Pizza Society revives the classic charm of Portland with its old-school interiors and buttery-garlicky pizza crusts. The home to the pyros, a gyro-like folded pizza crust loaded with vegan goodness, this vegan pizzeria promises an indulgent and creative dining experience.

They have a spectacular variety of all-vegan pizzas, pies, pyros, salads, and desserts. The Absolom is an all-rounder blend, but the Chalupa Batman steals the show with its taco-like flavor, prepared with spicy tofu and chipotle sauce.

Their salads are amazing, and we suggest finishing off your meal with their signature Rawdacious cheesecake. 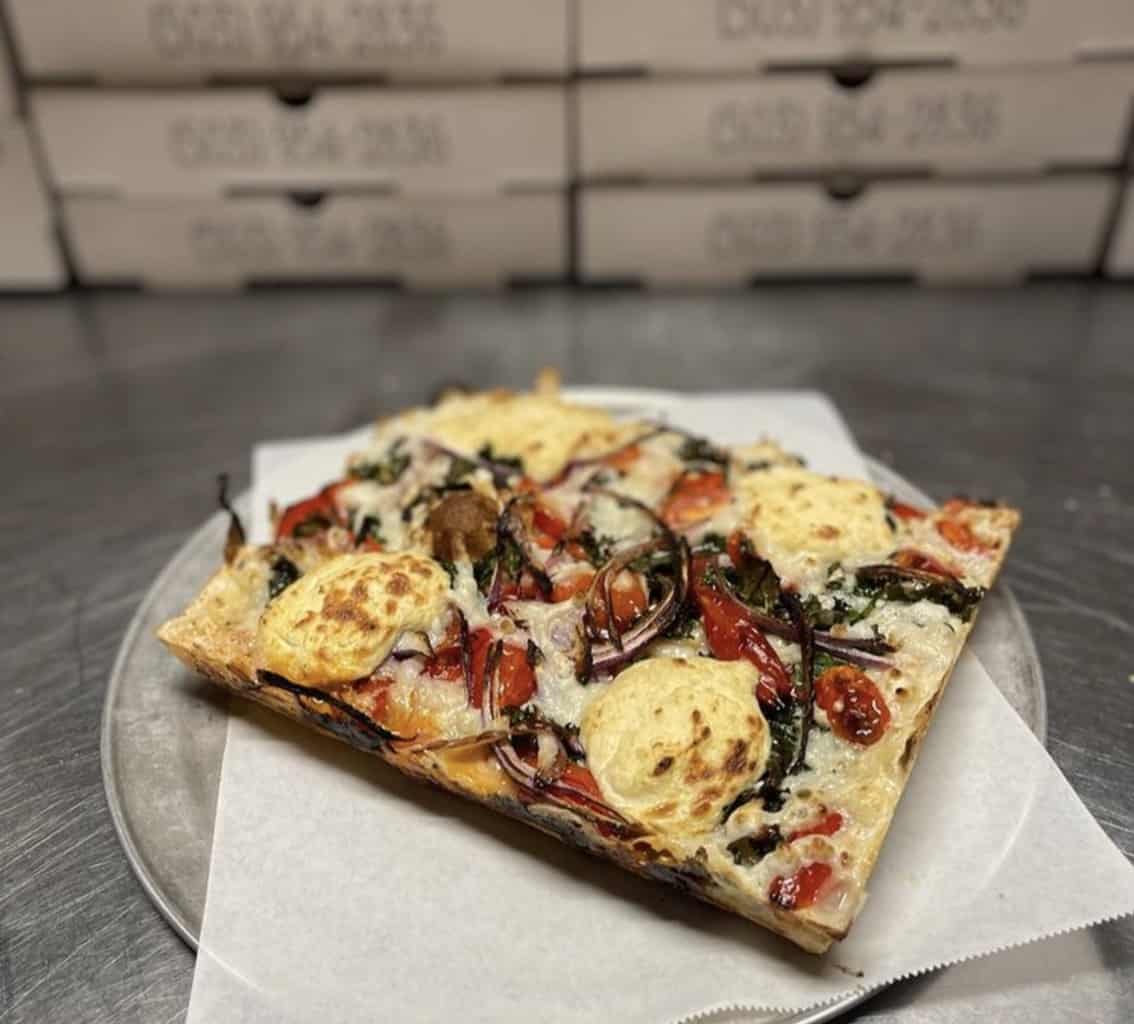 The dough is perfectly spongy and airy in the middle, with beautifully browned and crispy edges. Their focaccia crust is a definite must-have if you want to transport yourself to gluten-free, vegan heaven.

Be sure to try their iconic Green Supreme Pizza, a flavorful blend of kale, tomato sauce, ricotta, and hot dribbles of honey on the side. 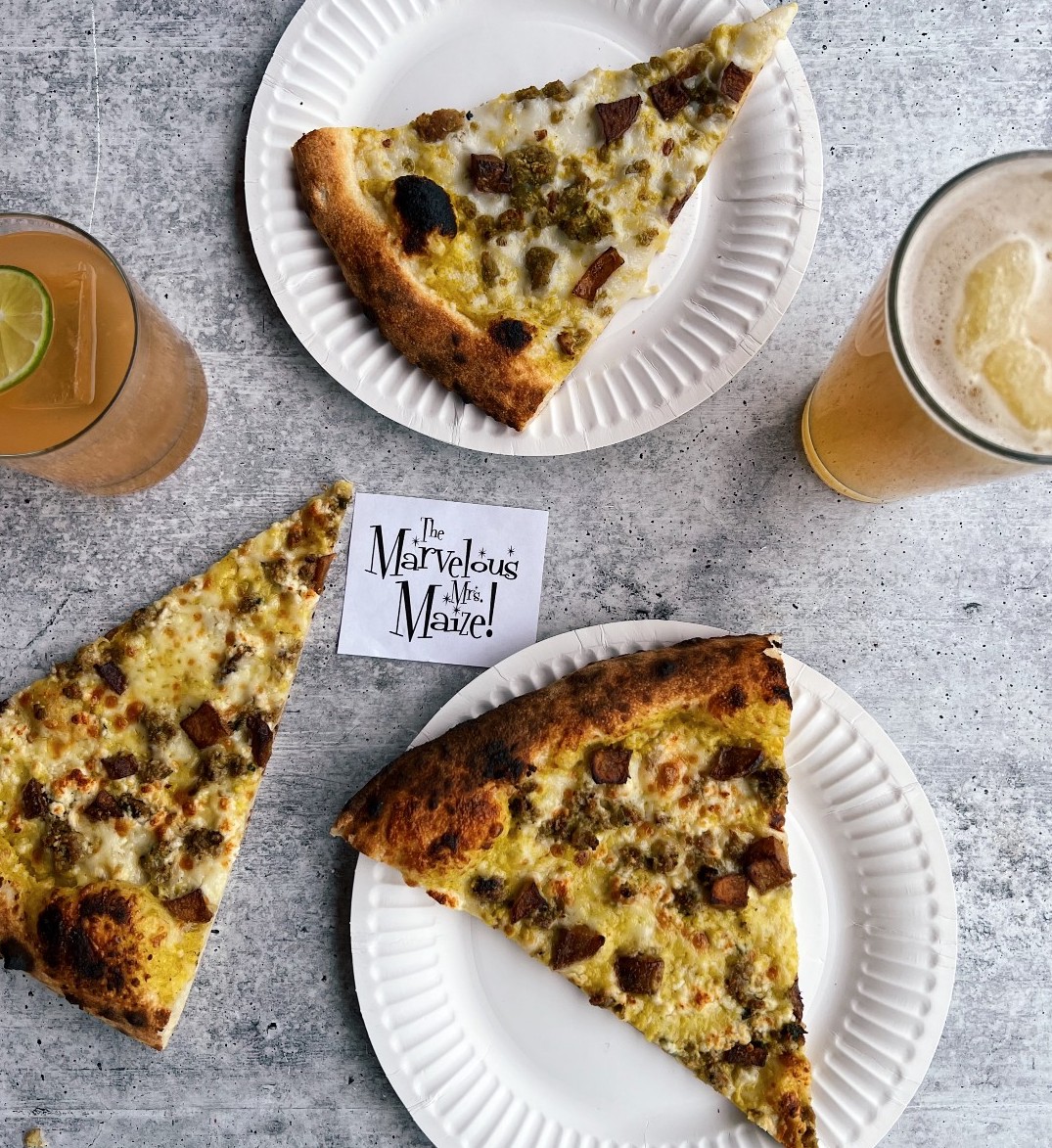 One of the oldest and most popular pizza places in Portland, the East Glisan Pizza Lounge is a plant-based paradise of exotic flavors and inventive cheese blends. This pizza lounge has served Portland’s vegan community with the finest New York-style thin-crust pizzas with an exciting vegan twist.

For instance, one of their finest combinations is a blend of the creamy consistency of roasted eggplant with the fiery heat of Calabrian pepper. We also love their signature vegan sausage, prepared with cashew cheese and kale. 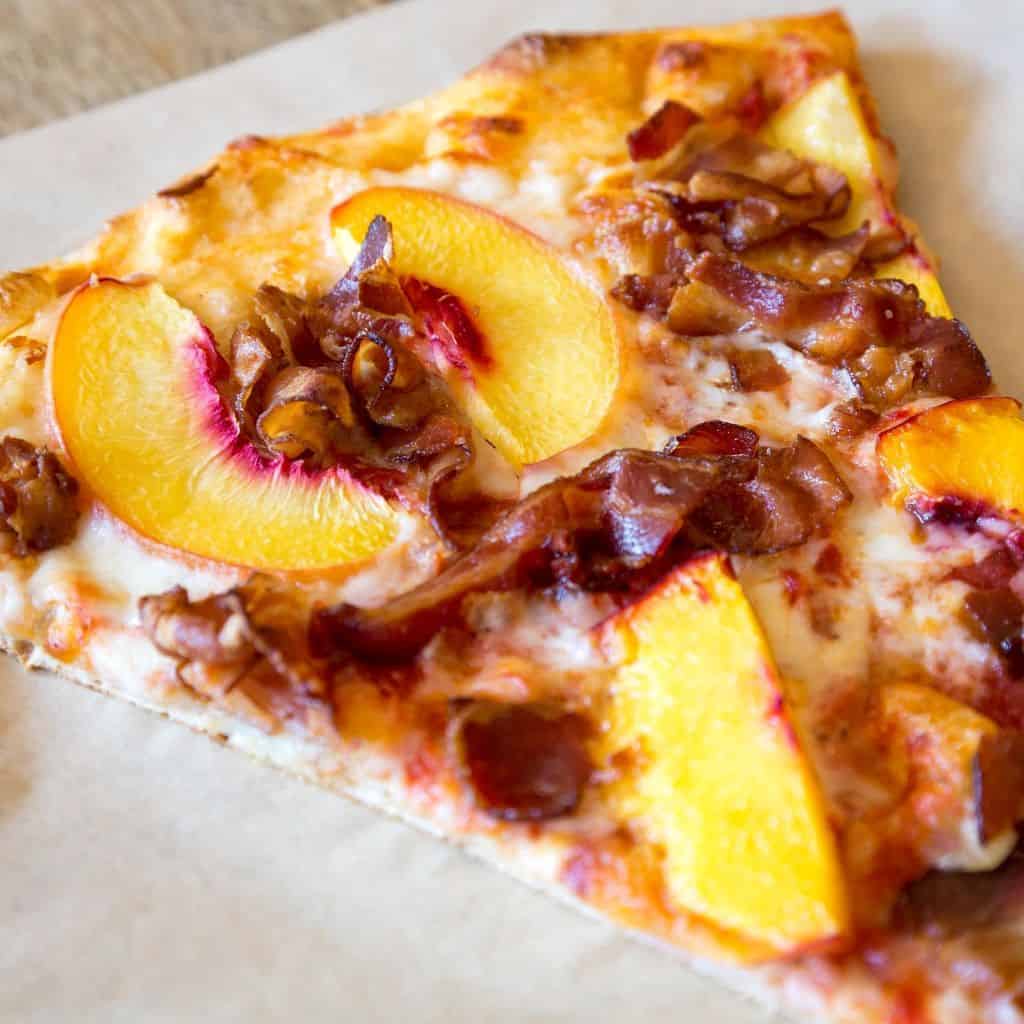 The pizza maestros at HOTLIPS have perfected the art of preparing the finest, extra-crunchy thin crust that doesn’t sag under the bulk of plentiful toppings. Their crust looks sleekly thin and crunchy, but each bite packs a super chewy consistency that unleashes a surge of happy hormones. If thin crust heaven existed, this would be it.

Their vibrant and hearty Hot Lips Vegan Supreme is a must-have with its flavorful blend of cilantro pesto, squash, chickpea balls, and broccoli. Their roasted red pepper piece topped with Kalamata olives and artichoke hearts is another scrumptious feast of vegan flavors. 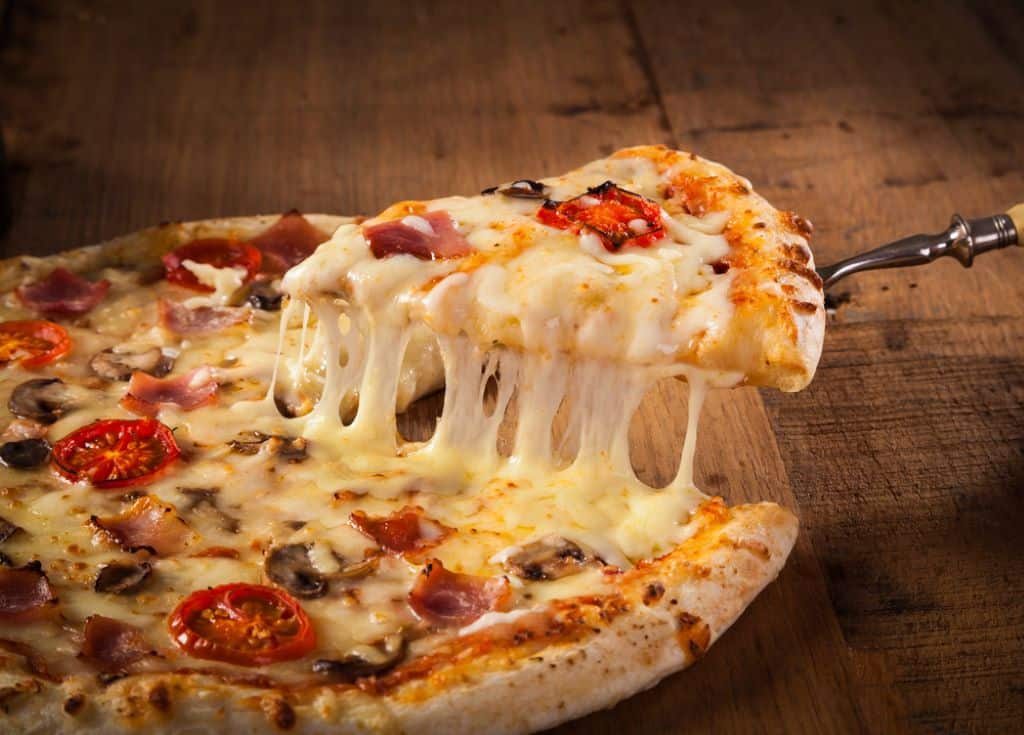 Baby Doll Pizza is one of Portland’s best pizzerias to enjoy a hearty and delicious slice of thin crispy crust topped with sautéed and caramelized veggies.

Their organic, handcrafted tomato sauce deserves all the applause and attention it receives, for it tastes heavenly when paired with their freshly grated mozzarella cheese and house-made ricotta.

The recipes are inventive and artistic, and we love the customization element that allows you to choose your own toppings. They offer the largest selection of vegetable toppings, ranging from seasoned artichoke hearts and red onions to roasted vegan sausage, Kalamata olives, and colorful peppers.

7. Rudy’s Gourmet Pizza – Rudy’s has a fantastic variety of vegan and traditional pizza’s 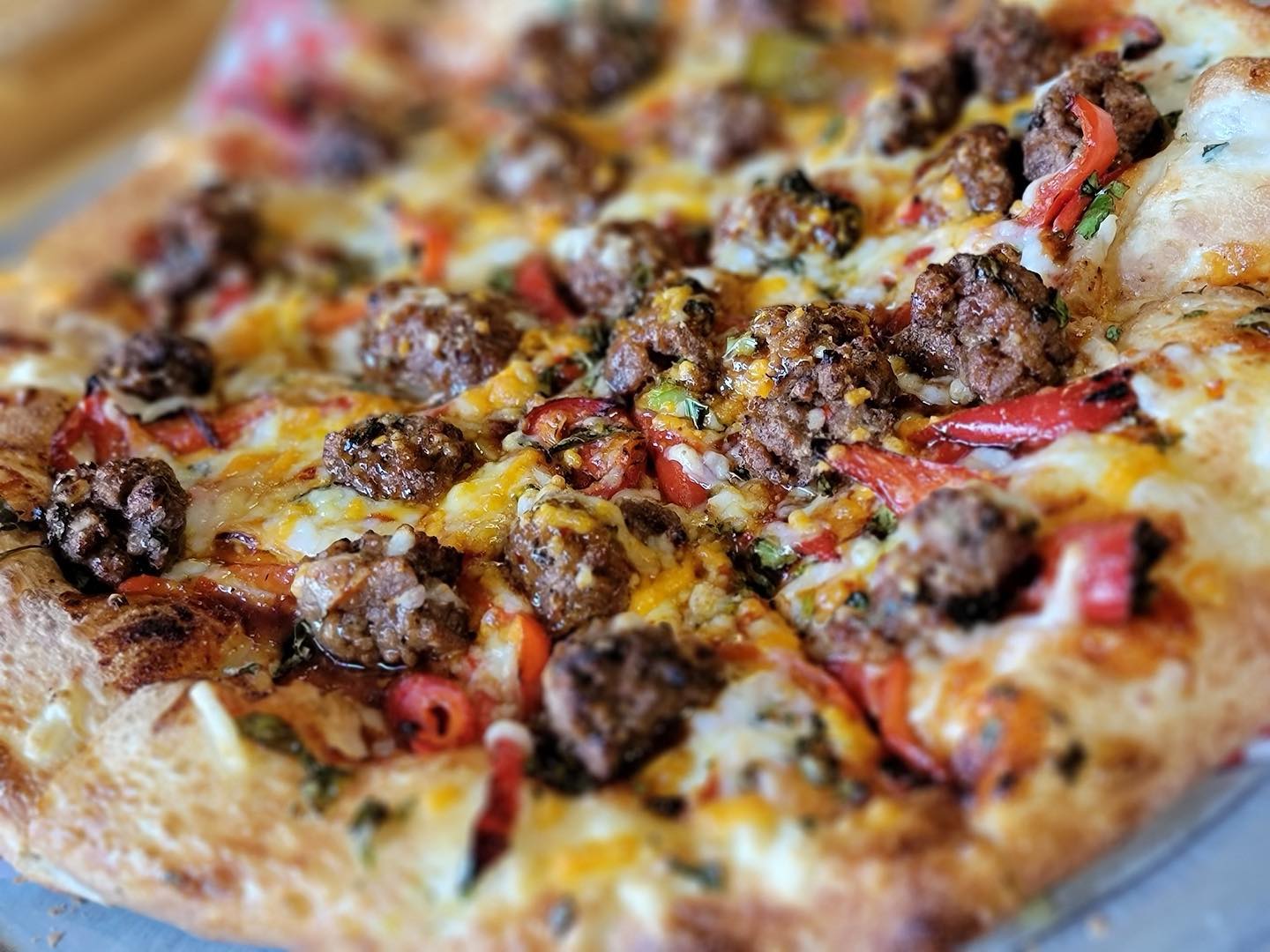 Rudy’s Gourmet Pizza is a legend for Portland’s pizza gastronomes, and while its menu isn’t entirely vegan, it offers some of the most delicious plant-based pizza flavors in the city.

Rudy’s has a flair for creating over-the-top pizzas, lathering them with house-made sauces, and nailing the perfect combination of crunchy and chewy thin-crust.

8. Via Chicago – the best place for vegan Chicago-style pizzas in Portland 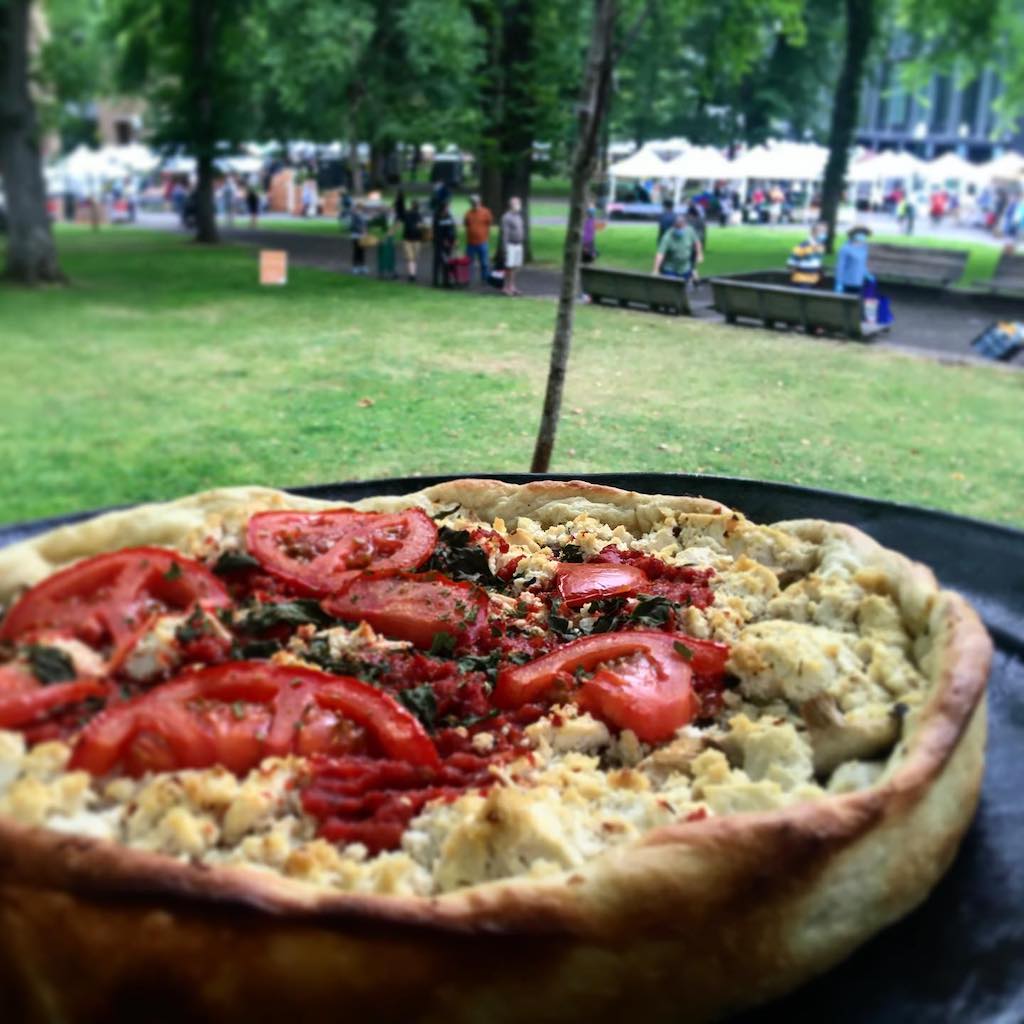 Their tofu ricotta is intensely comforting, and the deep-dish pizza is like a sauce-loaded lasagna with creamy veggies and bold flavors. You can pair your pizza with a selection of savory appetizers, salads, and fun drinks, like the Humm Kombucha.

9. Mississippi Pizza – vegan and gluten-free pies with music, trivia and other all-ages events 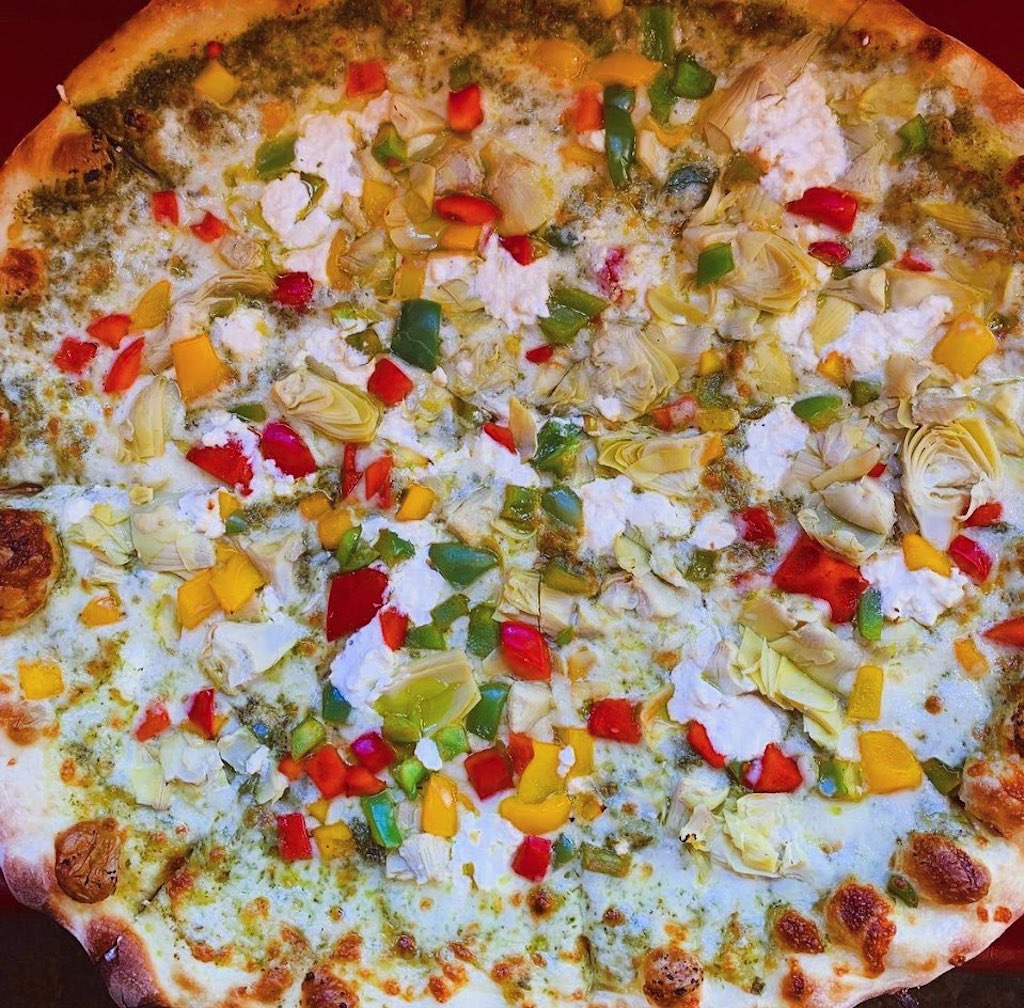 A Mississippi-style pizza is a hearty pie loaded with bold and fiery sauces, creamy garlic ranch, and a special dough that doesn’t collapse under the weight of bulky toppings. Portland’s Mississippi Pizza has perfect the iconic pizza pie, native to Mississippi, with a delectable vegan twist.

This pizzeria combines gastronomy with a lively musical experience, elevated by its creamy and flavorful vegetable-packed pizzas. The menu is filled with fantastical names, like the Enchanted Forest, which combines artichoke hearts, black olives, mushrooms, and broccoli, slathered with a rich pesto sauce.

Painted Hills is a definite must-have for zucchini lovers with a flair for hot peppers. 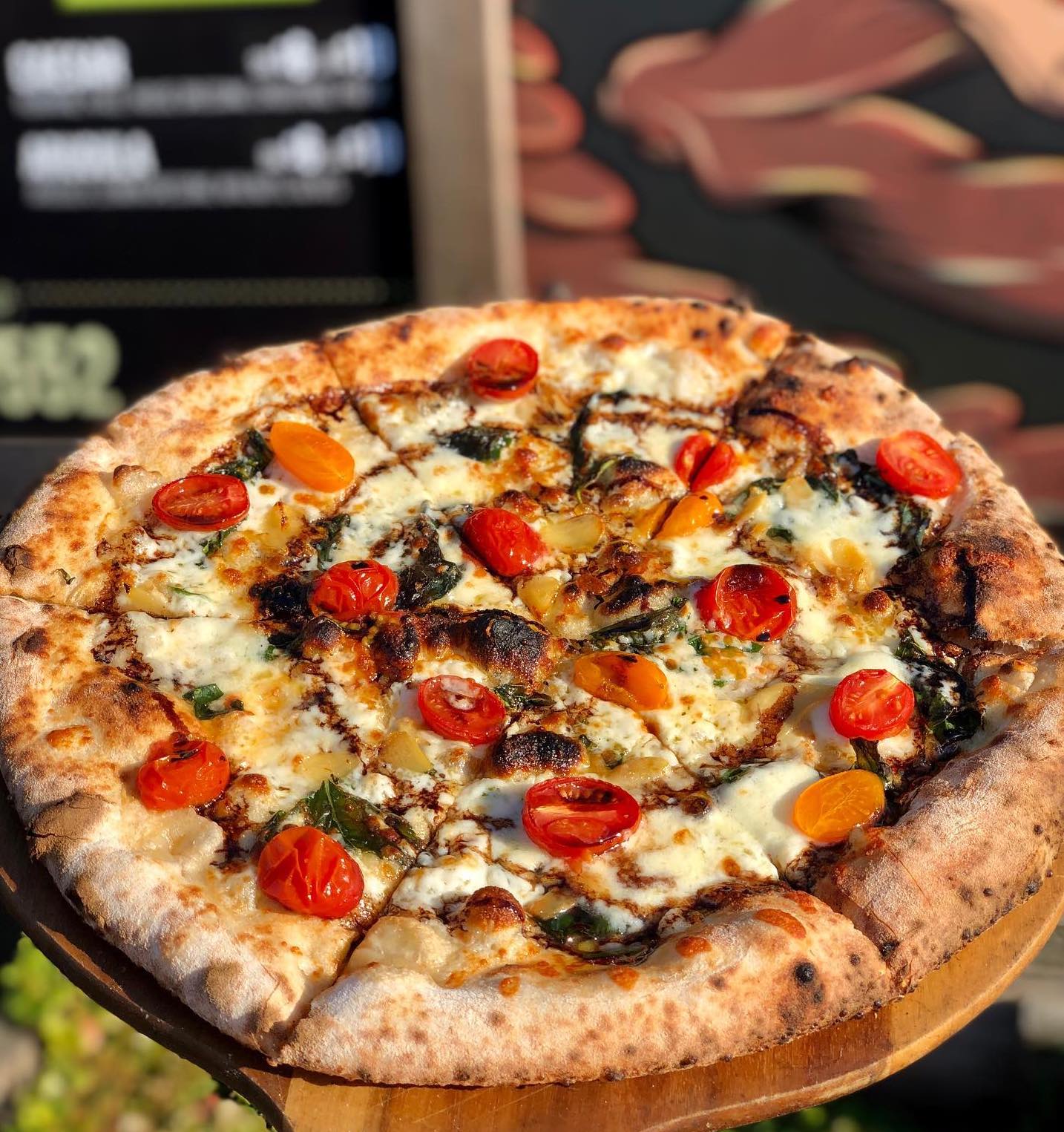 Pizza Creature offers a truly one-of-its-kind pizza-making experience, serving one of the best vegan Margherita pizzas in Portland. Their pizzas are slathered with garlic, generous blobs of velvety ricotta, and a cascade of mozzarella.

They have mastered the sourdough crust to a level of inhumane perfection, and the toppings include some of the most unusual ingredients.

For instance, their eggplant pizza is a zesty and flavorful combination of creamy eggplants, roasted walnuts, and spicy harissa. 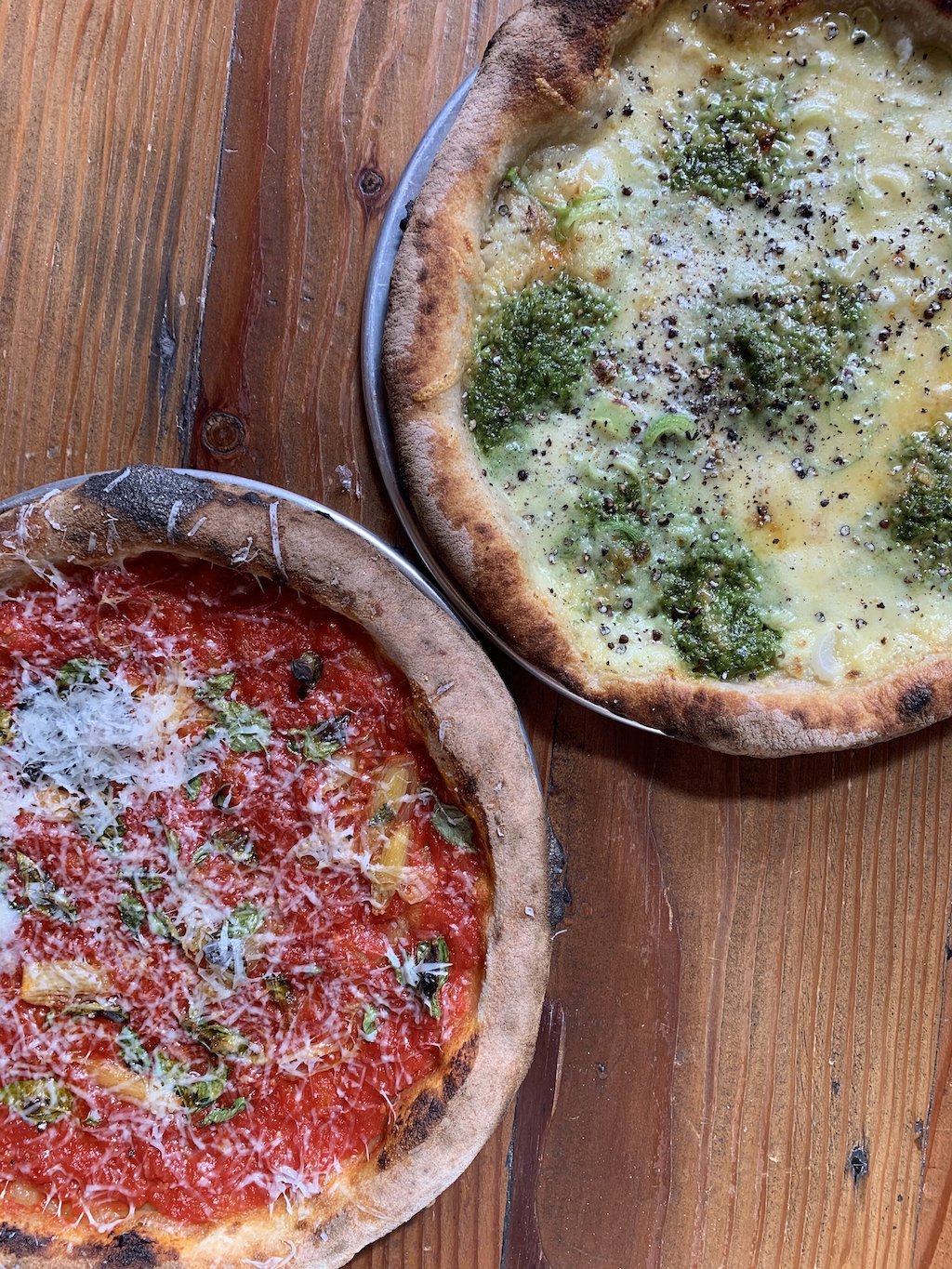 Are you on the hunt for the perfect wood-charred crust that’s crispy, crunchy, and chewy? You’ve found your match in Gracie’s Apizza, one of the best street food trucks in Portland. This food truck is a one-man show, and the simplicity of the recipes is the reason behind its raging success.

The red pie is a flavorful and bold blend of rich tomato sauce, while the white pie is a decadent feast of creamy, velvety ricotta.

Each pizza offers a unique blend of rich herbs, vegan sausages, fiery peppers, and colorful toppings. If you like a nice peppery kick, you will love their marinara. 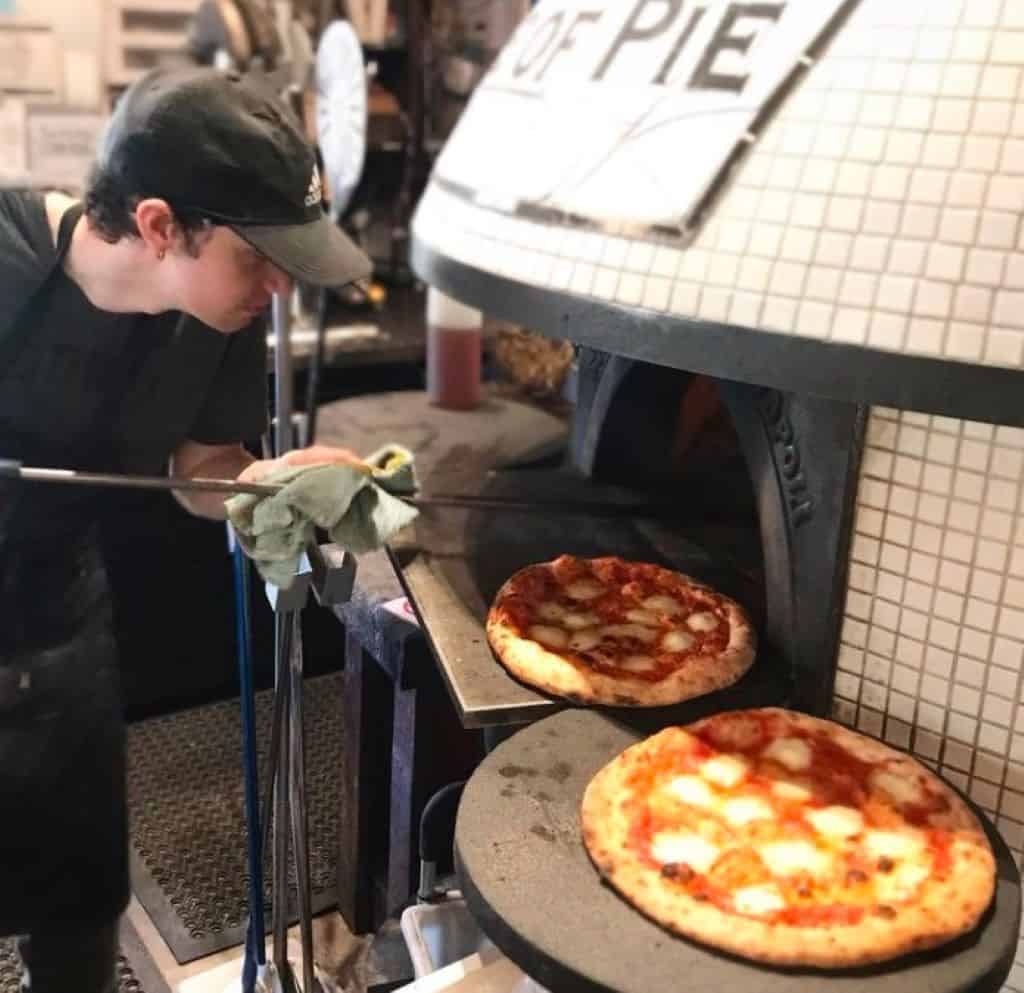 Portlanders flock to the Life of Pie to enjoy gourmet Neapolitan-style pizzas and pies baked to utter perfection.

Recently, Life of Pie has introduced a plant-based menu to delight its vegan customers with hearty splotches of their artisanal cashew-based mozzarella.

Their vegan pizzas are rich, hearty, and decadent, dusted with nutritional yeast and savory house-made sauces. We love their signature combo of kale, peppers, caramelized onions, and truffle oil.